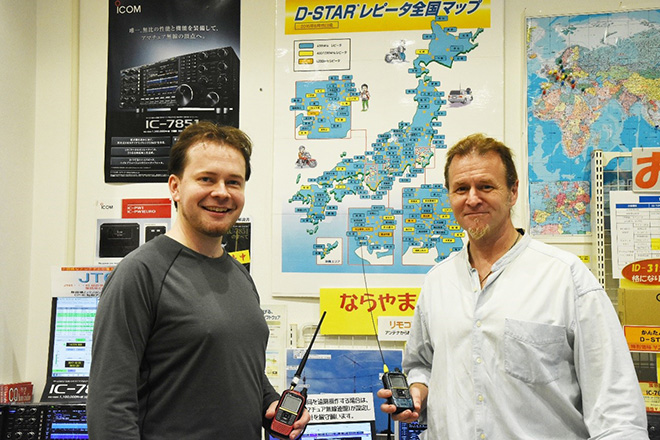 Bill is an American who has lived in Japan for about 25 years. He first attended a study abroad program at Doshisha University in Kyoto in the 1980s, returned to Japan with his Japanese wife, and has been here ever since. Juho, from Finland said, "I have been back and forth to Japan since the 1990s, and I have lived in the US, France, Denmark and Sweden in between, so it is not clear how many years I have actually lived in Japan." What they have in common is that they can speak Japanese almost perfectly and that their favorite radio is the ICOM ID-51. Furthermore, Bill has an IT-related job, and Juho works as a product developer and industrial designer, and they are interested in various technologies.

They were inspired to take their amateur radio license examination by the two hosts of the No Agenda Show, a renowned comedy podcast that they always listen to, which has a funny take on news and other  topics, including sometimes ham radio.

In January of this year they took the FCC examination (An exam to acquire a US amateur radio license) carried out by the volunteer testing organization "ARRL VE Kobe". Bill said, "I studied for an hour, every day for 2 to 3 months," Juho said, "On average, I studied about an hour a day starting about a month before the exam." The studying paid off. They both passed the Technician Class followed by the General Class (equivalent to 2nd Class Amateur in Japan) in one sitting. As there is a reciprocal agreement between Japan and the United States, they were also able to apply for Japanese licenses.

However, they did not immediately apply for their Japan licenses, although they were eligible. The reason was that at that time they noticed the call signs being assigned in the Kansai area (3) all started with "JP3Q", and “Q” is not very easy to say on the air and is longer in CW. They decided to wait until the assignment of the call signs rolled over to "JP3R". They analyzed the monthly trend of past call sign assignments in Japan and waited to apply for their Japanese licenses when they thought the assignments had reached "R". Their strategy worked. Bill was assigned the call sign JP3REM and Juho received JP3REN. That’s all the work they went through to avoid calls that contained "Q".

Now, despite the fact that they are from different countries and have different professions, they are quite close. They took the amateur radio examination together and acquired adjacent call signs, so I wanted to know how they got acquainted with each other, so I asked. The answer was surprising. "We got to know each other through barbecue events in Osaka, and hit it off." From there, I learned that they  became more and more familiar through their shared interest in a variety of technologies.

Well, these two guys who acquired Japanese call signs were both using the ICOM ID-51 PLUS II. It seems that they also have similar tastes in radios. "We were very interested in D-STAR, as it can connect with smart phones and tablets, and at the time we bought them a data communication cable was also included. Also, the screen is large and easy to see." It seems they are quite happy with the ID-51. "Every time I go out, I bring it along. Sometimes it's fun just to take GPS logs and later see the route on a map even without communicating," said Juho. Bill added, "Actually, I bought my ID-51 even before I took my license exam. I could only listen then, but since receiving my call sign, I can now communicate with Juho from my home by simplex," and it seems that he is enjoying the communication and reception. Furthermore, Juho remarked, "Because the balcony of my apartment is facing in the opposite direction from Bill's house, we had to experiment changing the bands and trying various antennas to manage simplex communication." These two seem to like devising and experimenting with technical systems. 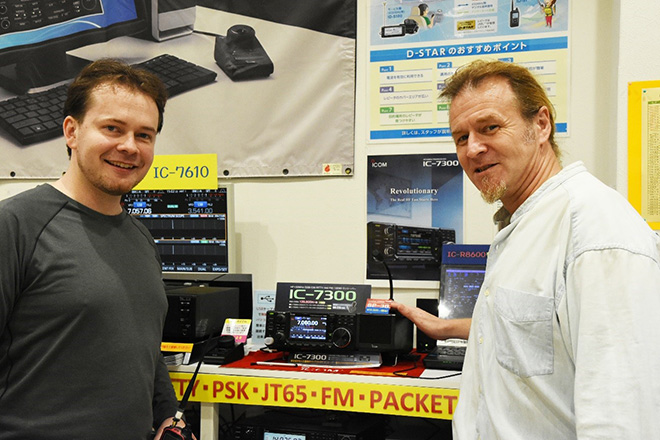 Juho talking about making 3D accessories for around the shack (left)  “Next is HF!”

Finally, I asked these two about their hopes for the future. Bill pondered, "I want to do HF. I really want an IC-7300, but the IC-7100 is also compatible with D-STAR so they're both in the running".  Juho says, "One day I would like to get a Finnish OH call sign, and I'd like to try a DXpedition to Märket Reef where you can use the special OJ0 call sign." Furthermore, "I would like to utilize my 3D printing knowledge and skills, and design experience to make accessories for around the ham shack." And finally, both agreed that, "we want to do CW in the future."

After the interview, Bill and Juho showed me a handmade antenna by N9TAX. Although this antenna is not well known in Japan, it is very portable, has high performance, and is quite inexpensive. It is designed for the 2 m and 70 cm bands. Since the 70 cm band centers on 440 MHz in the USA, N9TAX adjusted it a bit to match the Japanese 430 MHz band. Nevertheless, they introduced me to a very attractive antenna. See below for details.