The operator says “Change operating band to 7 MHz.” into a microphone. The radio operating band was changed to 7 MHz without pushing or touching any controls on the radio front panel. An interface unit detects the voice message and the unit converts the voice audio into commands, and the commands control the radio. That is cool.

We found a unique system and concept products that were displayed, and demonstrated as a future operating style in the Icom booth at Ham Fair 2018 in Tokyo. One is called “AI Communication Box” and is a stand-alone type. One is called “HF Transceiver system powered by Alexa” and is a Cloud type used with “Amazon Echo.” Each unit is connected to an Icom radio. Each system has an interface unit for converting voice audio into the Icom CI-V (Communication Interface-V) commands. The commands control the radio.

Many visitors in the Ham Fair should expect to see new Icom products but they stopped by the AI Communication Box corner to see the near future communication system. The FB NEWS Editorial staff visited the Icom Narayama Laboratory to know more about the system. Described below is the report of our visit. 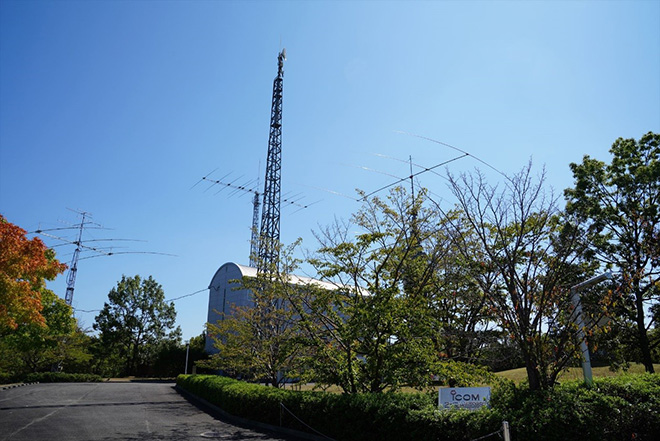 ● Stand-alone type Icom AI speaker “AI Communication Box”
The AI Communication Box has a Julius© speech recognition engine and MMDAgent© speech synthesizer software installed in its box as an interface unit. Many vocabulary words and basic language grammar are preprogrammed into the speech recognition engine. When you speak into the microphone and the engine detects your speech, the unit sends the CI-V commands corresponding to each word or sentence to your radio to control it. 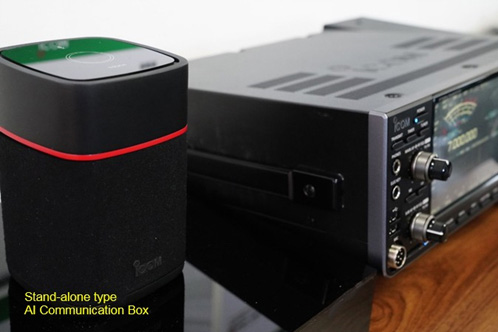 AI Communication Box connected to the IC-7610 through USB (CI-V).

■ Operation with the AI Communication Box

The development staff members got many questions from visitors at the Ham Fair. Questions were, for example, when will it be sold, how much will it cost, can the system recognize local accents, and so on. They felt that visitors were interested in the system.

● Cloud type AI speaker using the Amazon Echo.
The system functions with the Amazon Echo, a Wi-Fi router, and a Raspberry Pi, as shown in the diagram below. When you speak to the Cloud service of Amazon Alexa through Amazon Echo, the service recognizes your speech vocabulary. A designated server (Socket IO) recognizes the CI-V commands, and the Raspberry Pi controls the radio with those commands. 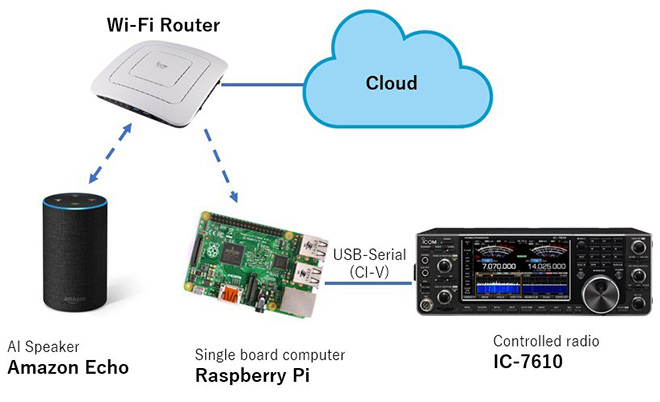 The FB NEWS editorial staff also interviewed the researcher who developed the Cloud type AI Communication Box. The researcher told us that to make the fixed IP address contract unnecessary and a port forwarding unnecessary, he introduced a Socket IO between the designated server and the Raspberry Pi. Unlike the stand-alone type, speech recognition relies on the Cloud style Amazon Alexa, so it is difficult to independently develop and adjust. The most difficult thing is matching between a dedicated server and a computer (Raspberry Pi). When you turn on the computer, it automatically handshakes with the dedicated server, and after completion it will be able to transmit data at any timing from the server, but he had a hard time working on coordinating this bidirectional communication.

We also asked about current issues and future development.
"The problem at the moment is that the command may become longer compared to the stand-alone type. With the stand-alone type, you can change the frequency with your voice commands, such as "Change frequency" → "Please set value" → "7 MHz." With the Cloud type, you say the directive "Alexa, Set the frequency to 7 MHz.”  I would like to make the directive a little shorter, even in the Cloud type in the future. Also, since it is sent through the Internet, there will inevitably be a delay, so it is one of the future tasks to improve communication efficiency." 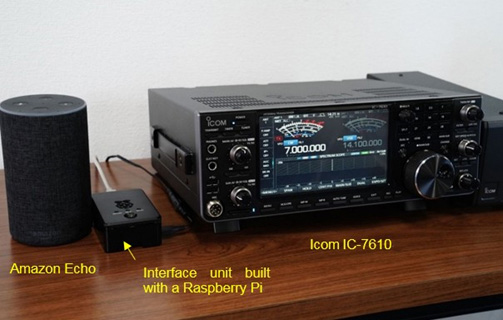 Example of the system connections

■ Operation with the AI Communication Box

These are the good points for the Cloud type box.
-  You can control radios through your smart phone instead of the Amazon Echo.
-  Voice recognition accuracy is higher than for the stand-alone type.
-  No voice recognition engine or speech synthesizer is needed.

When asking a researcher more about future development, he said "I do not think that we will make it as a commercial product, but I would like to continue doing such research in the future. I hope to be able to present something new, even at next year's Ham Fair. Please expect it." 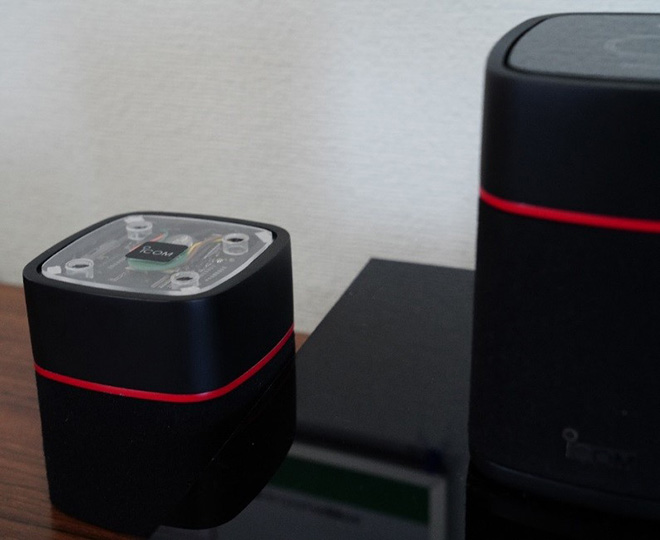