Erii the Amateur Second-Class Radio Operator, “Having a Crush on Amateur Radio !?”

Episode 1: The First 20-Meter Band and the First 100 W Operation

The FB Girls Radio Club has opened a base station!

Last August, Erii succeeded in getting her second-class amateur radio license. (In case you don’t know her: Erii is a member of the FB Girls Radio Club whose members are girl hams. The Club members are also staff members of the FB NEWS.) To celebrate her accomplishment, the Monthly FB NEWS editing staff, gave her a 100 watt HF radio. Though she now has the second-class*1 license, she’s still a novice in ham radio. We first thought that an IC-7300 would be good enough for her, but she strongly said “I’m gonna operate amateur radio more and more, seriously, for sure!!” so we ended up giving her an IC-7610, wondering maybe the radio is too much for her...?

*1 In Japan, there are four classes of amateur radio operators, the First-Class(highest), Second-Class, Third-Class, and Fourth-Class(lowest).
About 80% of all license holders are the amateur fourth-class radio operators, and only about 2% have the second-class license.

Then she made an application for a 100 watt station license. The members of the FB Girls were able to output only up to 50 watts so far, because of their third-class licenses (according to Japanese law, called the Wireless Radio Act*2). Fortunately, the club got the 100 watt license soon. The QTH we decided to operate from is a nice lodge on a mountain with many great antennas. It is located in Ako county, Kamigori city, Hyogo prefecture (near Kobe), where club members have operated radios several times before.

*2 According to the law, the 20-meter band and the 100 W operation are only allowed for the amateur first-class and second-class radio operators.

One day in December, we departed for the lodge, which has is a licensed ham radio base station. This time we were aiming for QSOs with European stations in the evening, and with North American stations in the early morning, so we decided to make a two-day, one-night trip. 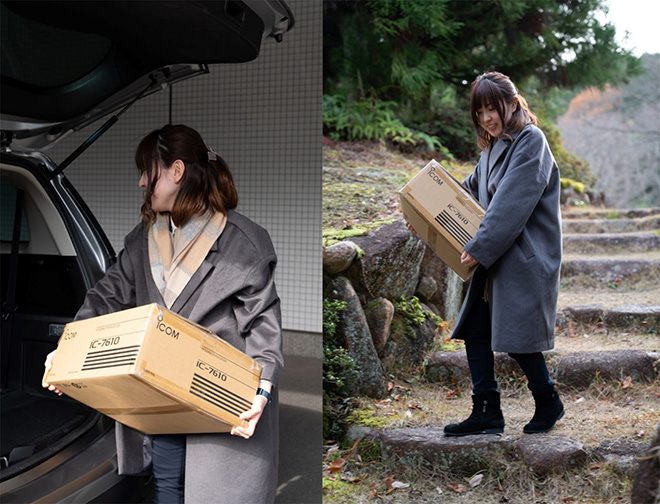 The operators were Erii, from the FB Girls, and Noah who graduated later from the same university. Amazingly, Noah is also an amateur radio second-class radio operator! She got her license before Erii, but she has less experience in making QSOs. However, both majored in foreign languages, so fortunately they speak English. Moreover, Noah also speaks Russian, because her university major was Russian. How reassuring these two are! (We are sorry that Noah*3 is not a member of the FB Girls, so pictures of her cannot be uploaded on the Internet... well, you can take a peep later in this article!)

*3 Noah was a guest operator of the FB Girls Radio Club this time.

We arrived at the destination a little past 4 pm. It took about 30 minutes to install the IC-7610 and connect to the DC power supply and antennas. Now, it’s time to watch the 20-meter band they’ve been longing for! However, they couldn’t hear many signals. When looking at the spectrum scope of the IC-7610, it seemed very quiet, and the propagation conditions were not so good. After 10 minutes, however, the situation dramatically changed, as if the propagation was celebrating their debut on the 20 meters! Signals were especially strong from European stations. The very first QSO with a European station might not be just a dream this time!!

Erii called the first CQ on 20 meters. “CQ DX, CQ DX, CQ DX...calling CQ and standing by.” Well, usually it isn’t that easy, and no one expected much. Then out from the speaker came “IK2...” Erii’s face was like “Oh my gosh! Can you believe this!?” for a second, but in the next moment she became extremely happy! She easily succeeded in the first 20 meter DX QSO.

After that, a huge pile-up from European stations occurred, which considerably surprised even the veteran ham staff. Erii sequentially had QSOs with Italian, Spanish, and Russian stations, and then handed the baton over to Noah. Noah also was able to make FB QSOs with Russian, French, Spanish, Dutch, Italian, Danish, German, Finnish, and Swedish stations. All she had to do was just wait to be called. “This is something only the 100 watt operation can realize!” “See? I was called by a Finnish station! How wonderful if we could travel to North European countries!” Erii and Noah got so excited! The propagation condition was truly good, but was the pile-up just because they were YLs? We envied them... 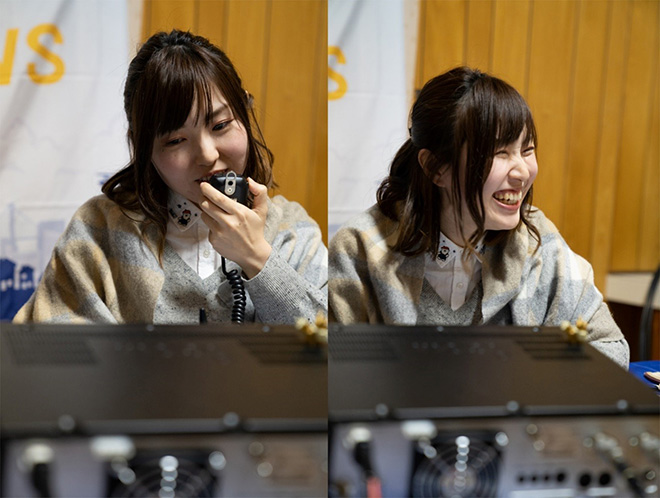 The propagation was great. The results were far better than we had expected!

The propagation had been good for only about an hour, but in the end they made QSOs with a total of 21 stations from 11 entities. They were called by so many stations in European countries, and spent a dream-like time. After the propagation faded out, they tried to have QSOs with Japanese stations, but there was no response. They also called CQ on the 40-meter band, but there was no response either, probably because of the radio quiet zone problem. “How about trying the 80-meter band? Yes!” They were again in a big pile-up! They made 24 QSOs in an hour.

It had been a long day for the novice ham girls, and around 10:30 pm they looked a little tired. “Shall we go QRT? ...Yeah, sure...because we have another big job tomorrow.” We thought they would go straight to bed but... guess what! They didn’t stop laughing and chatting in their bedroom for a long while. Fun times!

On the second day, heading for the North America

On the second day, they were supposed to get up at 6:30 am at the latest to reach their goal to have QSOs with North American stations. We were wondering if they were able to make it, but we really didn’t have to worry at all. It was still 6:00 am, but they were laughing and chatting as they had done last night...we couldn’t believe they were so energetic! Noah opened the door of the bedroom and shouted “Good morning everyone!!!”...what a cheerful girl! Erii, on the other hand, looked still sleepy, but she was able to be up in time. Good for both of them!

At 7:00 am they started to watch 20-meters again, and then they could hear signals from North American stations. Erii called “CQ North America...” but nobody answered. Even if she called a station with a very strong signal, she was not picked up. There were probably a lot of ongoing domestic QSOs in the United States. She tried, tried, and tried again...but lost out to the domestic stations. Still, she didn’t give up. Suddenly, a voice “...VE7**” was heard from the speaker! That was the memorial first QSO with a station in the North American continent for the FB Girls. Unfortunately, Erii and Noah had QSOs with only two North American stations, in spite of their efforts in getting up early. 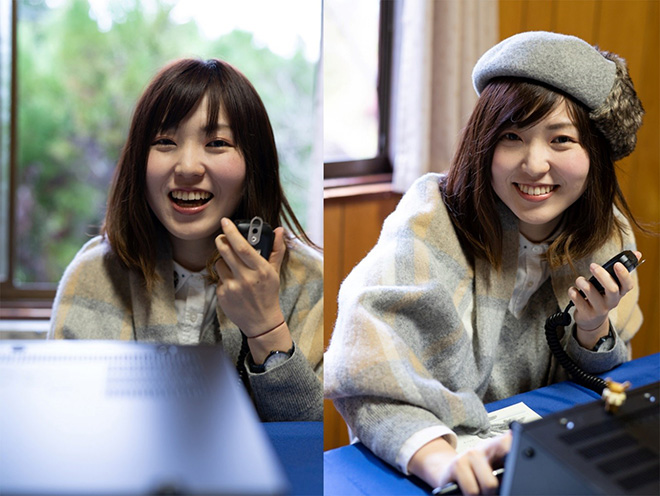 On that day, there was an ARRL 10-meter contest in the United States from 9 am (Japan time) so they changed the frequency to 28 MHz, but nothing was heard. Nothing was displayed in the spectrum scope of the IC-7610 either. Apparently, it’s time to finish the DX operation. Erii and Noah then started calling CQ on 40-meters. Since it was Saturday morning in Japan, the band was very crowded. They efficiently used the IC-7610’s wonderful spectrum scope, and called CQ on a quiet frequency. Soon, they were called by a lot of Japanese stations. In addition, they had QSOs with two stations from Hong Kong and Taiwan, again on 20 meters. Overall, their result was fairly good for their first 20-meter band challenge!

● Final results
20-meters: 16 entities, 26 DX stations
80-meters: 28 Japanese stations
40-meters: 59 Japanese stations
For the first 20-meter band and 100 watt operation, they experienced a big pile-up from European stations. Erii made a QSO with a station in Canada where she studied English in her university days, and Noah made QSOs with some stations in Russia where she studied Russian in her university days! They had so many wonderful and enjoyable overseas and domestic QSOs. 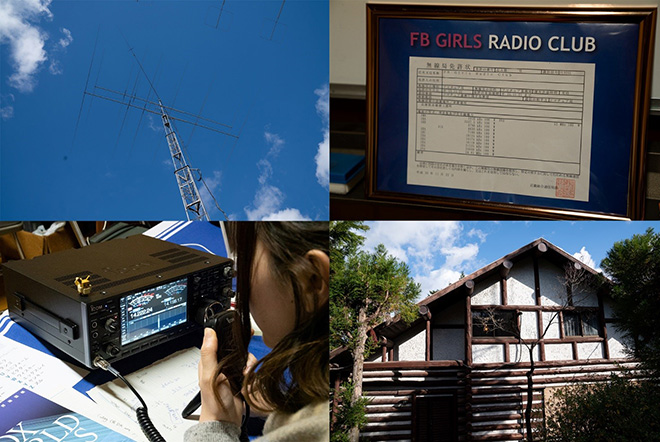 Their next goal is CW!

Thanks to this opportunity, Erii and Noah became really good ham friends. One of the FB News staff members operated CW when they were taking a break, and it seemed that they became interested in the CW operation. “I think we should study CW from now, and let’s operate CW next time,” said both Erii and Noah. But they don’t have a CW key. They told us that they are planning to buy a “pretty” CW key. We are wondering what a “pretty” key for girls is...? No idea. When they get the key, we’ll introduce it on the Monthly FB News. Don’t miss it! 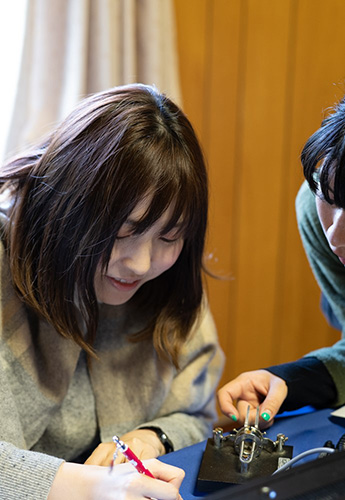 Erii and Noah (only a half of her face is showing!) practicing CW