My name is Jim and I'm a Magic Band addict. Here's my story — weaving from Magic to Tragic then back to Magic — and doing so on a limited budget. 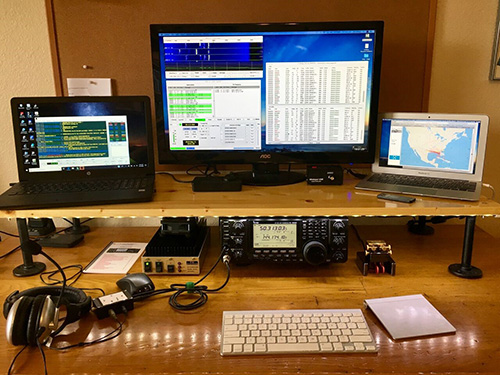 The Magic and Tragic Band

6 meters is known as the Magic Band because of all the extraordinary propagation that can happen on this VHF frequency (50 to 54 MHz), which is normally limited to line-of-sight propagation.

It can also be the Tragic Band — when none of this happens and the band is quiet for months at a time. Then all of a sudden one of those magic spells springs forth. That's where the addiction comes into play!

Magic and Tragic aside, it can also be a very easy band to get on the air. In most cases, you just push the 6 Meter button on your existing HF rig, since most modern transceivers include the band. Then you need to plug in a fairly small 6 meter antenna.

Suitable antennas can include a dipole at just 9 feet in length. Or a small beam with a low-cost television rotator. Not only that, but the antennas don't need to be all that high in the air. In fact, most consider about 30 to 40 feet (9 to 12 meters) high to be optimum. But don't even let that hold you back. I'm using 20 to 25 feet (6 to 7 meters) and getting excellent results.

In short, once the magic starts happening, a simple station can be quite effective in taking advantage of nearly every opportunity.

Here's just a taste of what you can work on the Magic Band, pulled from my own log here in north central Texas:

With all these contacts I was running 100 watts into either a Moxon beam, a dipole in the attic, or a vertical dipole mounted on a small mast attached to my backyard fence. 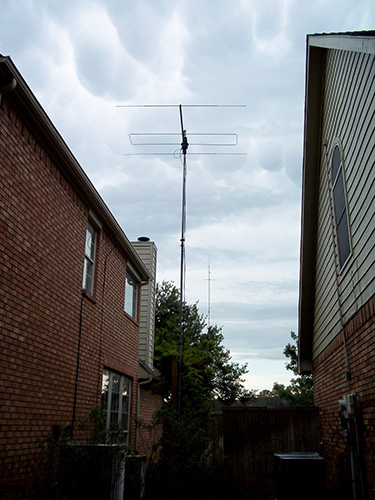 Three element6 meter Yagi on pushup mast. In the background is a vertical dipole that covers 20 meters through 6 meters — and it works great on the Magic Band. 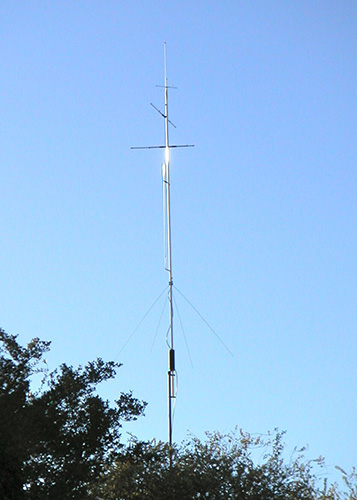 I'm located in Texas, essentially in the central part of the USA. That helps in working stations on both East and West Coast USA. But it doesn't help all that much getting past those same stations to Europe or the Pacific. Even so, magic does happen as witnessed from the short list above.

6 meters essentially forms a twilight zone between HF and VHF propagation modes. On the HF side that includes F2 propagation, signals bouncing off the ionosphere's F layer, which only happens on 6 meters during the high side of the sunspot cycle. On the VHF side that includes tropospheric scatter and aurora scatter. Aurora is solar driven and it helps if you're in the northern latitudes. Troposcatter can happen on 6 and above for modest distances. But the Magic comes in with Sporadic E or Es.

Sporadic E involves bouncing signals from the E layer of the ionosphere, with distances in the range of 500 to 1,200 miles (800 to 2000 km), and can include multiple hop Es for longer distances. The magic comes in because Sporadic E, while seasonal — happening primarily in the summer months along with a few other times in the year, is not dependent on the solar cycle. That means it's still happening now during the solar minimum.

Another mode that is independent of solar activity is Meteor Scatter. Here meteors are entering the Earth's atmosphere and burning up and, as a result, ionizing the E layer allowing signals to bounce off. This takes special digital modulation modes, primarily MSK144 of the WSJT-X suite of software. A beam antenna is needed as well to direct your signal. Higher power can help here, too.

Trans-equatorial Propagation (TEP) happens along the equator, with stations above and below the equator working over extreme distances. This includes my own contact in the list above from Texas into Argentina. This mode does depend on solar activity.

Moon bounce, or Earth-Moon-Earth (EME), is another mode that does take significant antenna gain and power. I haven't yet tried this mode.

With my own station, I've managed to get on the air with both verticals and dipoles that appear to work just fine. While VHF SSB and digital modes are generally conducted with horizontally polarized antennas, I've found that verticals can be quite effective on 6 meter Es. In fact, I've worked over 100 grids using a vertical dipole, including Scotland.

Even so, my favorite antenna is the Moxon. This is a small two-element beam that's pretty easy to place on a television antenna rotator and a push up mast. I've used this at home and on my VHF rover for contests. In fact, on my VHF rover I've used a painter pole for the mast along with an arm-strong rotator, rotating the mast by hand. 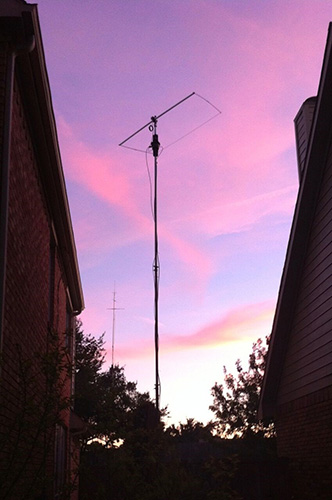 6 meter Moxon beam antenna. This is one of my favorite antennas: low-cost, small footprint, very effective on the Magic Band.

Again, I'll note that 6 meters does not require high towers. As stated earlier, most experts feel that an antenna height of 30 or 40 feet (9 to 12 meters) is optimum for 6 meters. This takes into account the ground effect and the fact that Es signals are coming in from many elevation angles — not necessarily the lowest angle.

You Can Do This

That's a pretty quick overview of the Magic Band along with a glimpse of what I've been doing with my station. Over this past winter, it was pretty quiet here. But this summer, it has really picked up with openings to both the East and West Coasts as well as into the Caribbean. And, I've seen on the spotting networks a number of East Coast stations working into Europe. 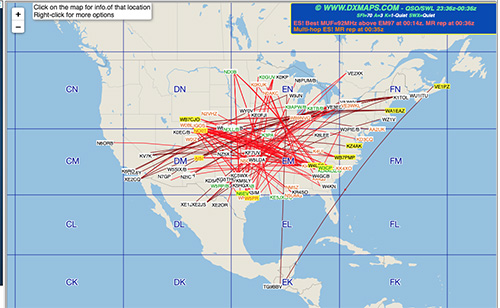 6 Meter Opening plotted by DX Maps from spotting networks. This is a great way to monitor the band for openings.

You can do this too. Press the 6 Meter button on your HF rig, set up a dipole or use whatever you have on hand, then get on the air. Fire up WSJT-X in FT8 and watch the stations coming in on the waterfall. You'll be really surprised by the distance you can work stations on a band that really should be only line-of-sight... Right.

But I warn you. Beware of Magic Band addiction. It can catch you, too.