I recently returned from the 24th World Scout Jamboree held in July 2019 at the Summit Bechtel Scout Reserve in West Virginia, USA. It was an amazing experience and it included a fabulous amateur radio operation.

What is a World Scout Jamboree?

The word jamboree means large celebration or party — typically a lavish and boisterous one. That would well describe the national and world jamborees that I've attended. 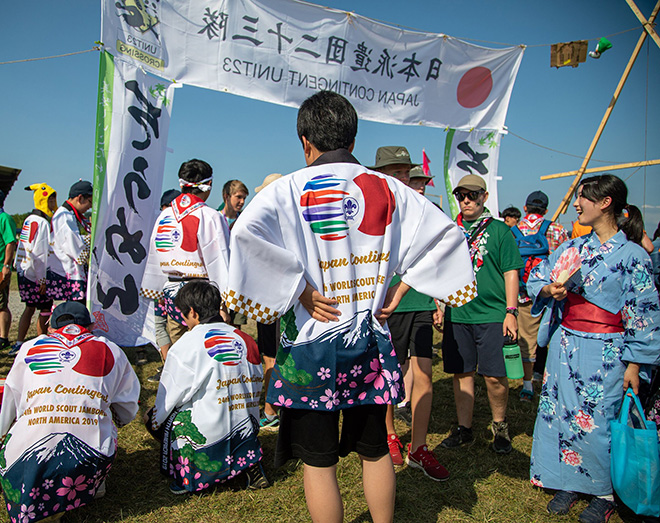 The Japanese Contingent at the 2019 World Scout Jamboree.

Note that the 24th Jamboree was hosted by a North American Team consisting of Scouts Canada, Asociación de Scouts de México, and the Boy Scouts of America.

Is There Amateur Radio at the Jamboree?

Amateur radio has been a part of the World Scout Jamboree experience since 1947 in France and in 1957 in the United Kingdom. The GB3SP operation was also where the concept of Jamboree on the Air, the largest annual Scouting event in the world, was born.

The NA1WJ amateur radio operation was hugely successful with staff members from Australia, Canada, Chile, Finland, Germany, Japan, Liechtenstein, Malaysia, Netherlands, Norway, Switzerland, Taiwan, United Kingdom, USA, and Zimbabwe. It wasn’t necessarily easy to mesh cultures and approaches to Scouting and amateur radio, but we all came together to demonstrate amateur radio to 3,000+ Scouts from around the world and completed 4,000+ two-way contacts that covered 86 countries. 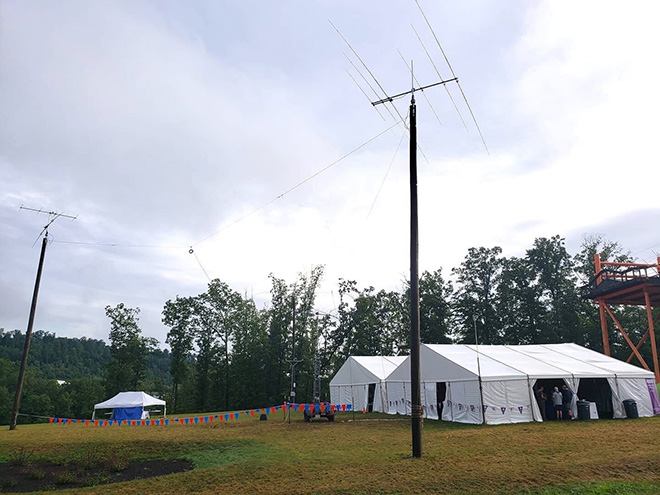 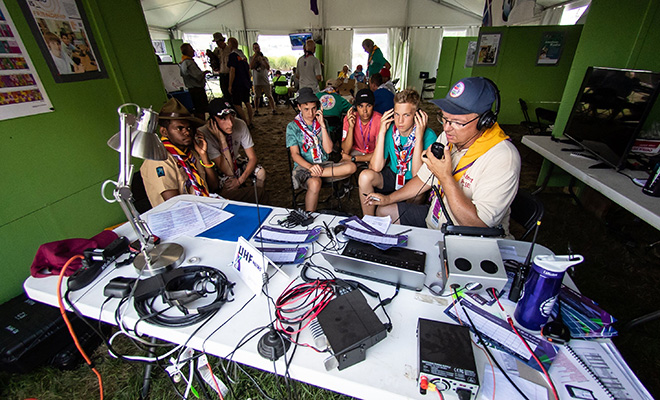 The NA1WJ Demonstration Station at work bringing amateur radio to Scouts from around the world.

Not only that, but we also launched four Pico Balloons — Mylar party balloons with just the right amount of industrial grade helium to provide the lift needed to rise and fly at 28,000 feet (8.5 km) to 32,000 feet (9.7 km) — right in the jet stream. The ultra light amateur radio payload receives GPS signals and transmits position and telemetry on the 144 MHz band using APRS. Once in the air, you can track them. Two of our balloons crossed the Atlantic Ocean, one ending near Madrid, Spain and the other near the Algeria - Tunisia border. 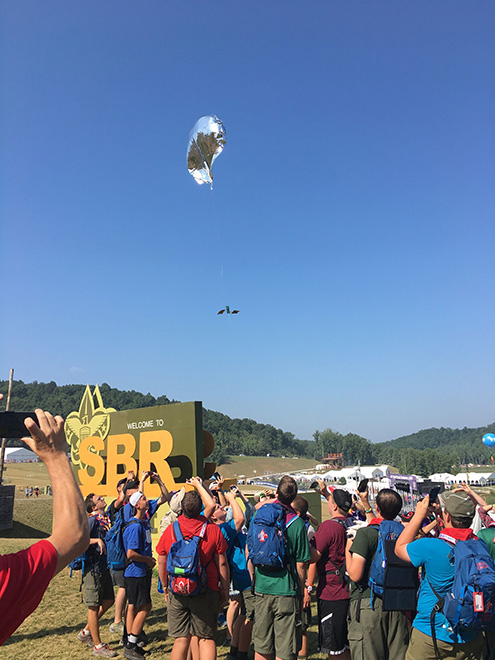 A balloon launch from the World Scout Jamboree. 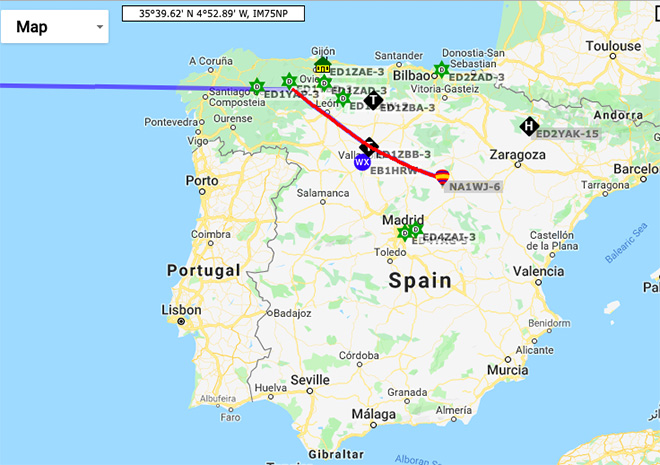 One of our NA1WJ balloons crossed the Atlantic Ocean, making it to Spain. 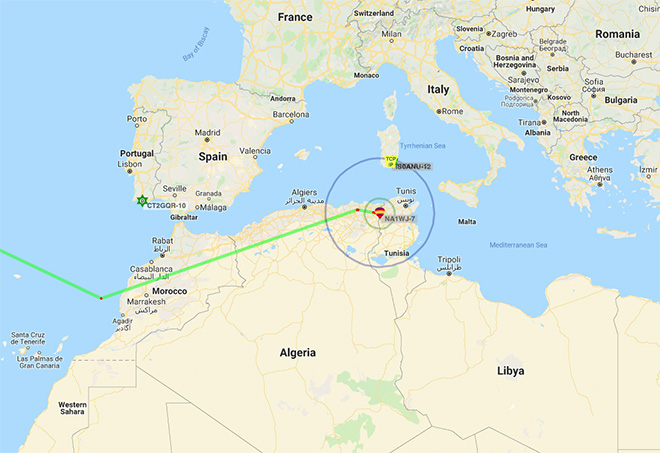 Another balloon made it to the border of Algeria and Tunisia.

One big highlight was our amateur radio contact with the International Space Station. Unfortunately, the ISS orbits didn't line up for a direct RF contact, so our downlink station was the ARISS ground station, ON4ISS near Antwerp, Belgium operated by Jan Poppeliers, ON7UX. Then the audio link to the Jamboree was via phone line to our stage. Ten Scouts then communicated with astronaut Drew Morgan, KI5AAA. The Scouts came from Australia, Bolivia, Iceland, Japan, Pakistan, Sweden, UK, and USA. 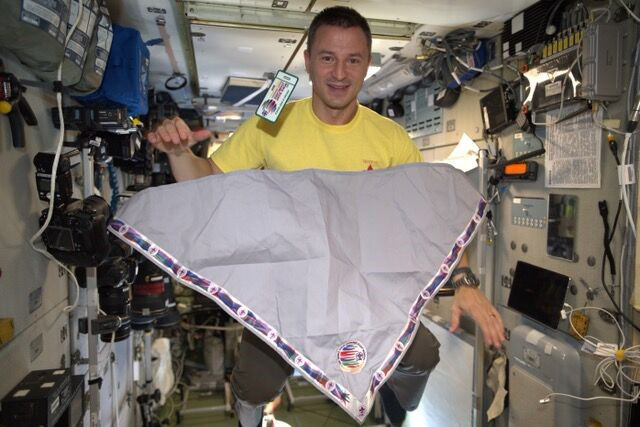 Astronaut Drew Morgan on the International Space Station during our World Jamboree QSO. He's holding a Scout neckerchief from the Jamboree. 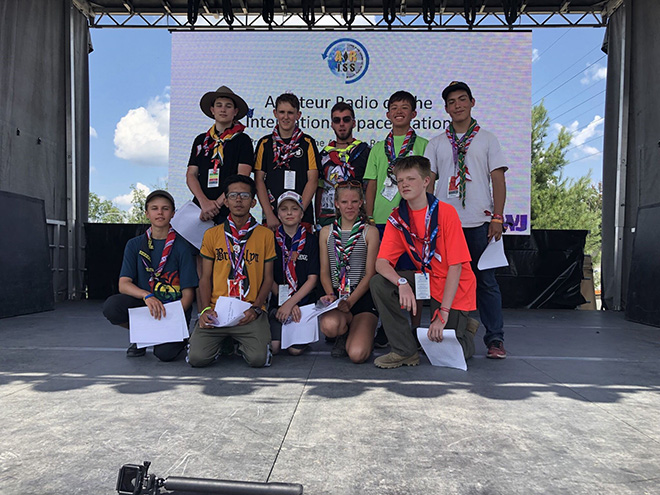 The Scouts who spoke with the International Space Station during the World Jamboree.

Our 4,000+ contacts were, of course, subject to propagation conditions. For that reason, we were also on the air in the evenings and early mornings to hopefully open some paths to the countries that couldn't work us during daytime program hours. Just over 80% of our contacts were in North America. The top countries outside the USA were Canada, Germany, Poland, European Russia, Italy, France, England, Spain, and Japan.

Our staff and sponsors made a big difference at the World Scout Jamboree. They introduced the science, technology, fun, and magic of amateur radio to over 3,000 Scouts. The Scouts, in turn, took it home with them to perhaps get involved with the next big event Jamboree on the Air this coming October. Or, quite possibly their Jamboree exposure will ignite their interest at a later date — months or even years from their first experience. Time will tell.

Meanwhile, we all had a great time at the World Jamboree and the NA1WJ amateur radio operation. 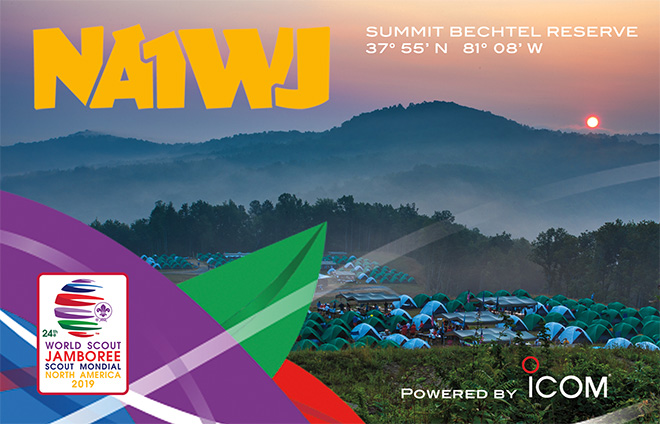 Here's the NA1WJ QSL Card from the 2019 World Scout Jamboree in West Virginia.

I hope you were able to get us in the log and help out with our amateur radio demonstrations. If not, mark your calendars for the K2BSA USA Jamboree operation in July 2021 or the next World Scout Jamboree in Korea in 2023.