In September 2019, a new repeater location joined the worldwide D-STAR network. The AH2G repeater became live on the beautiful tropical island of Guam, in the Pacific. 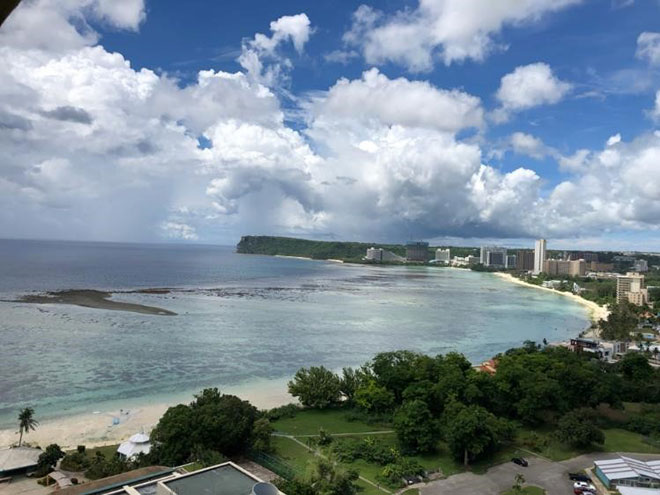 A view of Tumon Bay and Two Lovers Point to the north.

Guam is in the western Pacific Ocean and is the largest island in the Northern Marianas in Micronesia. It is an unincorporated and organized territory of the United States, thus making it the most western part of America (Often quoted as “Where America’s day begins”). Lying at a latitude of about 13 degrees north of the equator, Guam has a tropical climate all year round which makes it a popular tourist destination for people from Japan, South Korea, the United States and the Philippines. It is also home to 160,000 people, of which almost half are United States military personnel.

How D-STAR Arrived on Guam

In June 2019, a representative from Icom Inc. visited Guam for market research. Contact was made with the Marianas Amateur Radio Club (MARC) regarding the status of amateur radio in general on Guam. After a lunch meeting with the main representatives of MARC, it was tentatively decided to look at the possibility of installing a D-STAR repeater. After three months of club meetings and negotiation regarding the repeater equipment, AH2G became live on September 28, 2019.

The first QSO to take place was between KN4IAS, Shane Callaghan (current MARC president), and JO3WWA, Aaron Camp between Guam and Osaka, Japan. 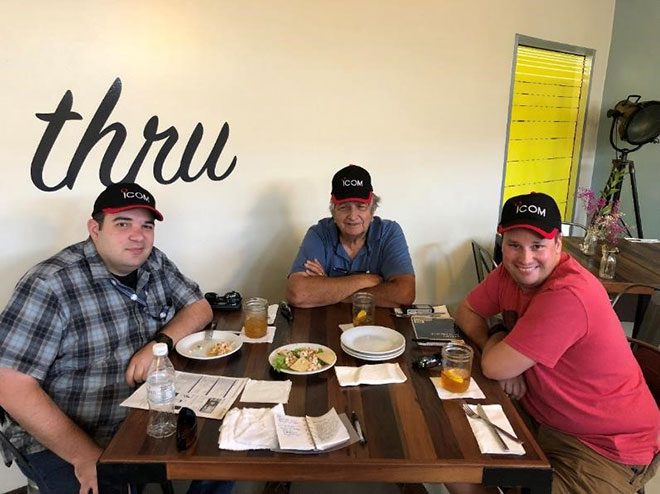 The lunch meeting that got “the ball rolling”. KK6VRK (left), KH2L (centre) and KN4IAS (right).

Shane, who also did the installation and setup of the repeater site was extremely happy with the result and especially the first QSO being an “international” one, which in his words “proves that the D-STAR system works. It also offers a new way for HAMs on Guam to QSO with other HAMs in the continental US, as well as worldwide. I couldn’t be happier or more satisfied.”

About MARC and Amateur radio in Guam

MARC is a small club with about 20 current members, but has been very active in recent years. With D-STAR now being available as an alternative to HF, QRP and Reflector operation, the club has already seen a positive increase in membership and more HAMs interested in joining.

Another huge positive for amateur radio on Guam is the clubhouse and the antenna facilities that can be accessed. The MARC clubhouse is located within one of Guam’s commercial radio broadcast stations, KSTO. These facilities have kindly been provided by one of the longest amateur radio operators on Guam, Mr. Ed Poppe (KH2L), who also is the owner of KSTO.

As the images below show, MARC boasts an enviable antenna set up many clubs would die for. KSTO’s broadcast antenna site is located on the highest point in the middle of Guam, thus allowing coverage over the entire island!

As you can imagine, a commercial radio station’s antenna site is built to be bulletproof, and as Guam is in “Typhoon Alley”, this is even more so. MARC is also an ARRL designated emergency amateur radio entity, with two ARRL distributed portable HAM stations ready for when the worst weather arrives. Club members have already assisted in disaster relief from major typhoons that have occurred in the Northern Marianas in recent years.

“Håfa Adai” means Good Day in the indigenous Chamorro language of Guam. With AH2G as D-STAR’s newest repeater entity in the worldwide network, HAMs on Guam and from MARC are eagerly looking forward to QSO’s from all over the world, and wishing everyone a good day!

The repeater details are as follows:
Repeater Callsign: AH2G
Frequency on Guam: 146.910MHz (-DUP)
Other details: This temporarily replaced the Analog repeater. Analog services have been relocated to the Analog UHF repeater (447.000Mhz -DUP)