My contesting began as so many of my journeys begin — a simple entry with a great deal of discovery and learning along the way. Then, as with most of my efforts, I start thinking about changes that eventually become relentless efforts to improve from one contest to the next.

Now this is easy to do with anything in amateur radio. You can always get better and improve your station and your operating techniques. However, with contesting you actually have a report card on your efforts — your score for every contest you enter. Plus, you have a ranking against your fellow competitors.

It's a short trip from seeing your ranking to start thinking about what's needed to win, or at least to improve. That then leads to an examination of what contest category best fits you and your station, or at least ramps up the possibility of actually winning.

I started out, quite some time ago, with HF contesting. What began as an effort to find more DXCC countries to add to my log moved pretty quickly into an improvement journey driven by scores and rankings. After all, it's pretty nice to see your call sign in the listing of entries. Then you start thinking about getting better and finishing higher.

With me, it started out with CW contests and low power (100 watts) using a vertical antenna. The early improvements were to antennas and to spending more time in the chair, as well as using DX spotting assistance. 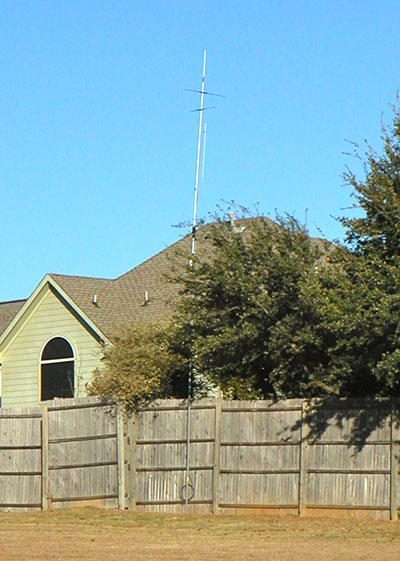 Simple verticals that I use for HF contesting

After a few years of that approach, I started looking at other categories such as single band entries and QRP power level entries. These categories have their challenges but they also have fewer competitors. I also found that entering 15 m single band allowed me to sleep at night when the band was essentially shut down.

My CW contesting run was eventually replaced with RTTY contesting. I enjoyed the technical aspects of getting everything set up correctly. That was followed by improvements in antennas, equipment, software, and even operating some SO2V — single operator two VFOs, where you CQ on one VFO and scan the band on the other VFO.

Perhaps my favorite time in both CW and RTTY contesting was building a 15 m Moxon antenna using fishing poles and wires. I installed it on a push-up mast pointed at Europe in the morning. I then watched the stations gradually emerge as the propagation improved (different stage of the solar cycle) and start working them with either low power or QRP. As the world turned and the sun moved, I'd run outside and point the antenna at Africa, then the Caribbean and South America. By evening, it would be pointed at Australia and Japan. It worked quite well and I actually won a few contests, even setting 15 m single band records. 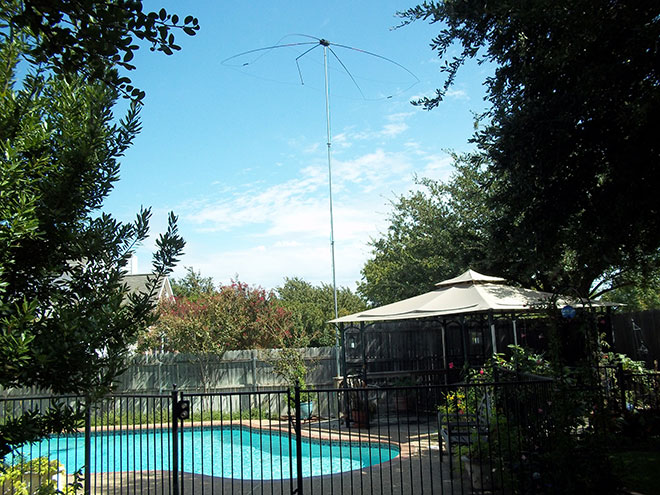 As HF band conditions deteriorated, and my interest waned, I started looking into 6 m, the Magic Band. I wrote about my addiction earlier on FB News at (https://www.fbnews.jp/201907/usa_en/)

That, of course, led to entering VHF contests, which initially held the same interest as my earlier HF contesting — this time putting more new grids in the log. Plus, it was great fun. It is not nearly as crowded as the HF contests. Plus, I even plugged in my microphone to make the majority of contacts. And, on 6 m during an opening whether you have 100 watts or 1,500 watts you're generally making lots of contacts.

Then the relentless improvement began once more. First it was an improved 6 m antenna, then I added 2 m and 70 cm. My early efforts on those bands involved that same push-up mast that I'd used in HF contesting. This time I added a rotator. A simple TV rotator will work well with these small antennas. 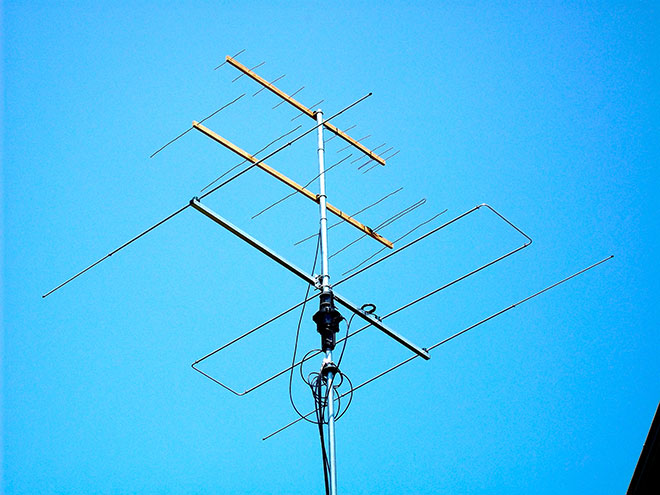 My early antennas were WA5VJB cheap Yagis, see (http://www.wa5vjb.com/yagi-pdf/cheapyagi.pdf) for full assembly instructions. These antennas are cheap, easy to build, and perform great. They offer an excellent way of trying things out. Of course, I didn't stop there but updated the antennas still further and even added preamps. 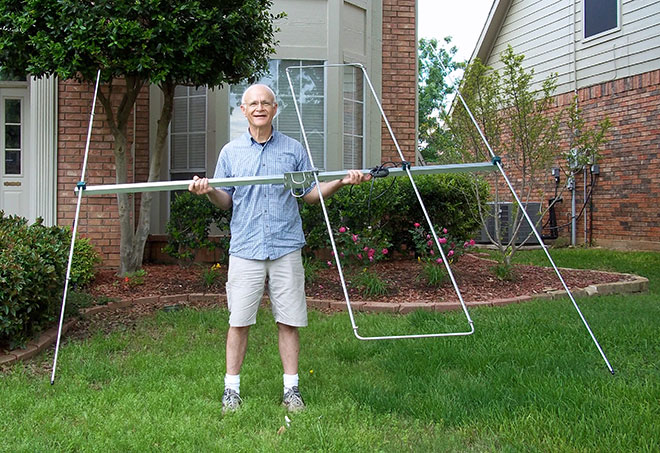 An improved 6 m antenna. It's a happy day when installing a new antenna

As with my HF contesting efforts, I started looking into not only improving my scores but finding the ideal entry category. I like the Single Operator 3 Band (SO3B) category. The three bands are 6 and 2 m as well as 70 cm. Power limits are 100 watts on the first two bands and 50 watts on 70 cm. The power limits in this category help out the small stations so you're not competing with the higher power stations.

One revolution in VHF contesting, and operating in general, is the WSJT-X software. I wrote about this earlier on FB News at (https://www.fbnews.jp/201908/usa_en/) It has greatly improved the number of weak signal contacts I can make and even added meteor scatter contacts.

I noted in my article that it is "disruptive technology @ work" and many both love and loath the software for what it's doing to the more traditional ways of making VHF contacts — phone and CW. But, there it is, one more way of improving your contest scores.

After a few years of working VHF contests here in North Texas, it became obvious that after a few hours I had worked all the nearby stations. The only exciting moments were when 6 m opened up or when a rover drove through some nearby grids.

That got me thinking, always a troubling moment. Who are these rovers and how do they set up their stations? Plus, wouldn't roving allow me to work those same dozens or so local stations all over again in each new grid?

My rover operations started out very simply with a 20 foot painter pole strapped to the side of my car. At every stop, I'd mount the 2 m and 70 cm antennas and set up the pole. Then I used my strong arm to rotate the antennas and work a few stations. 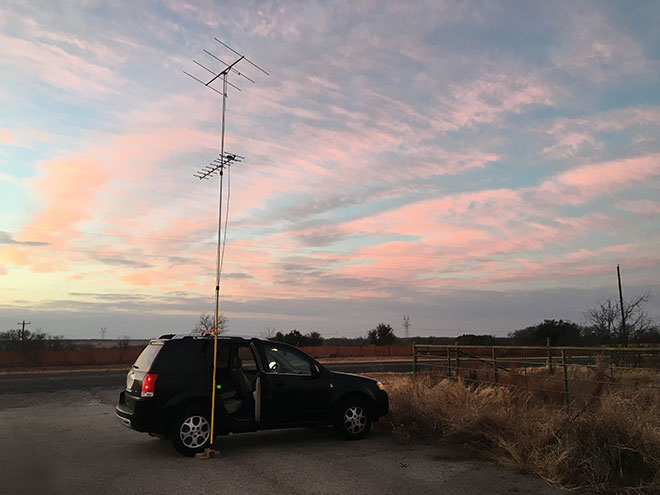 With that first effort, in a September contest, I elected to leave out 6 m since there were few openings expected. My route activated 8 grids, all around the local area with my route planned to minimize the amount of driving. I had a great time and I was able to improve not only my own score and activity level throughout the contest but also provide new multipliers and QSOs for other operators. Plus, at every stop I had an ideal location — no problems with homeowner's associations. 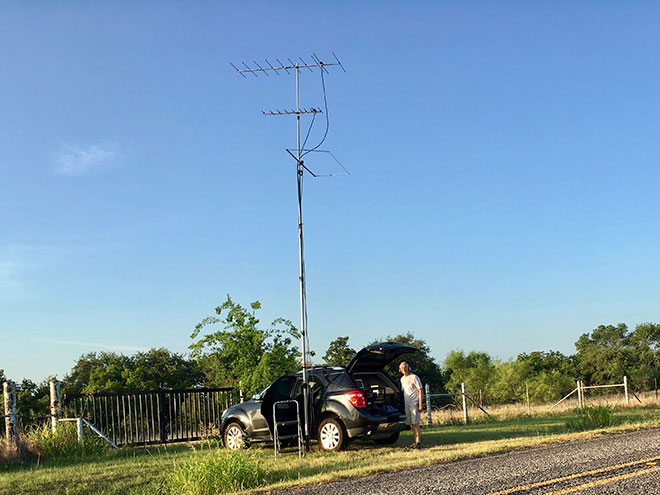 The full set up for roving from 6 m to 70 cm along with my stand-up operating position. It works well on nice days — not so much in the heat and rain.

Then, of course, the improvements started. Those included bringing along 6 m, upgrading the push-up mast, and then finally building an antenna and rotator assembly that fit on the roof of my car. That last one helped me reduce set up time in each grid to near zero and keep the operating location air conditioned in the summer and heated in the winter as well as dry in the rain. 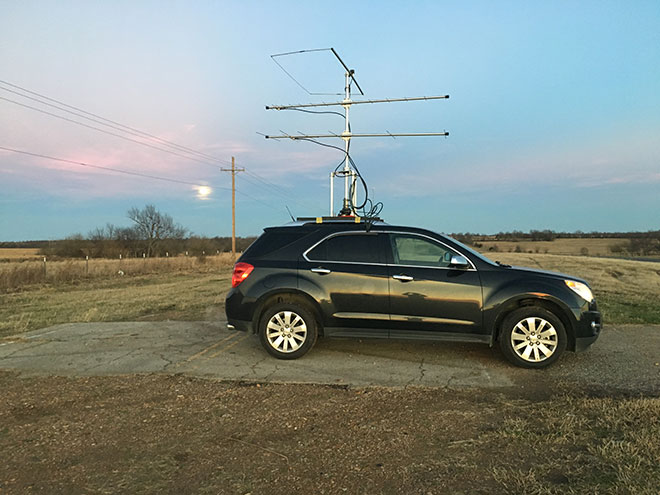 I will note that my style of roving is to drive to a previously scouted location in each new grid, set up, and work stations. Other rovers also operate while they are driving.

There are also separate entry categories for rovers. I've chosen the limited rover category. This means only the four lowest bands: 50, 144, 222, and 432 MHz. The power level is also limited to 200 watts on the two lowest bands and 100 watts on the two highest bands. Other categories allow more power and many more bands up into the microwaves. Limited rover suits my budget and simplifies my station set up. 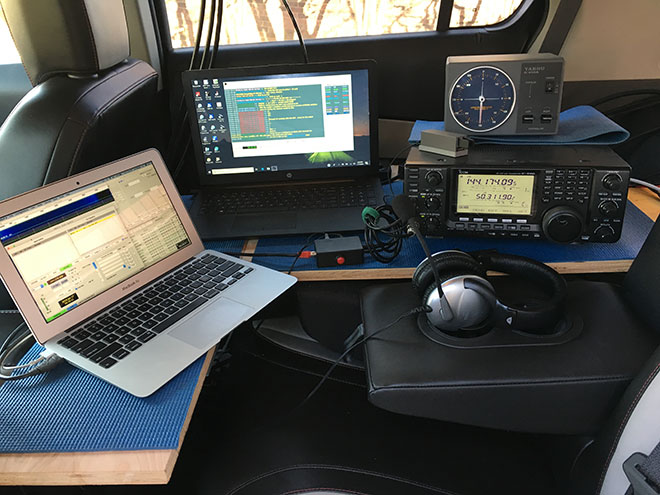 Rover operating location in the back seat of my SUV

Radio Contesting — It's a Journey

As you can tell, contesting can get in your blood. It gets you and thousands of other amateur operators on the air at the same time. It provides benchmarks for measuring your performance against others with similar setups. It can drive improvements in your station and operating skills. And, it also offers fun at whatever level suits your goals and budget.

Try it out at the next big contest.