Hello everyone! I’m Masaco, a Japanese singer and also a YL ham. This is a serial article called “Exploring the Ham Radio world with Masaco”, in which I introduce various Japanese ham clubs. Please enjoy each article, and learn about many amateur radio operators all across Japan.

This time, I visited Nagoya University Amateur Radio Club (JA2YKA/JR2ZIA), so please check this out! 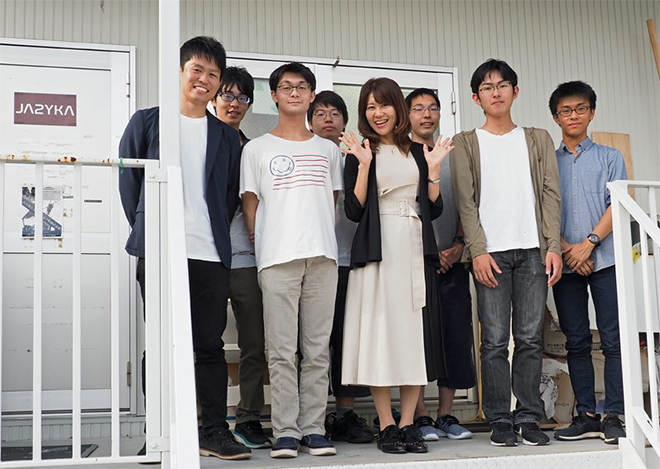 Nagoya University is a national university established in 1939, and this year is its 80th anniversary. There are faculties of Medicine, Law, Science, or Engineering...and about 16,000 of students are studying in this future-oriented academic institution. What makes it very special is that six out of the thirteen Japanese who have received Novel Prizes in the 21st century are the graduates or professors of this university. What a high rate! 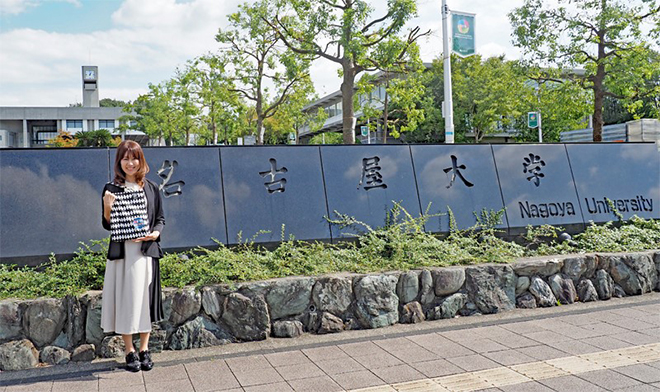 At the Higashiyama Campus 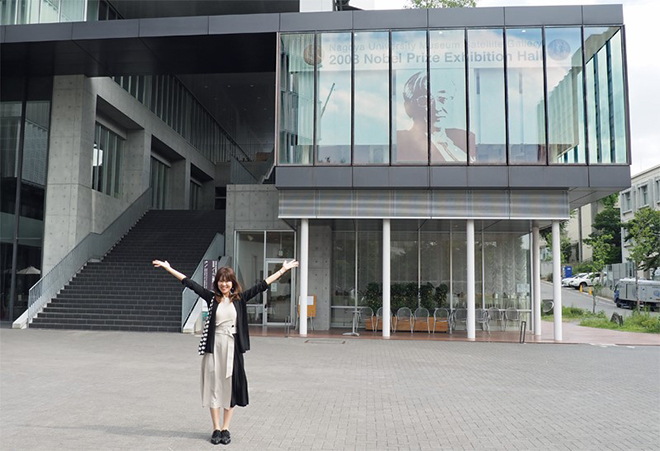 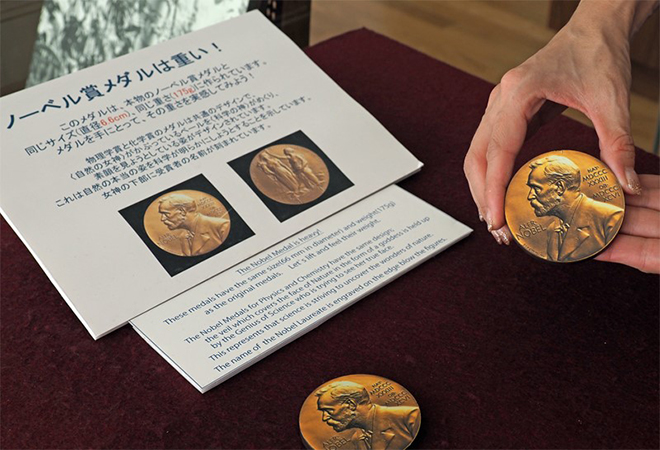 Replica medals of the Nobel Prize. The weight is the same as the genuine medal. 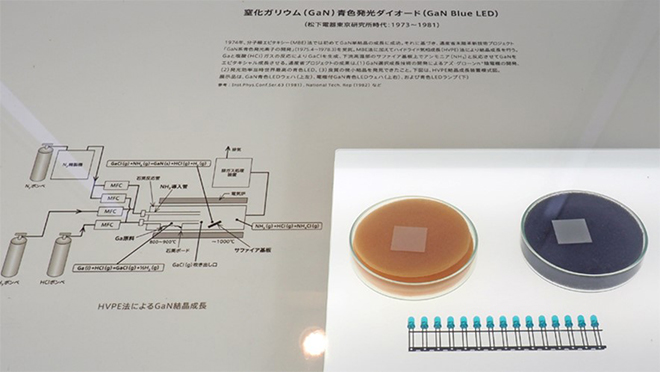 Now it’s the time to visit Nagoya University Amateur Radio Club members! They are based in a small but exciting ham shack, filled with many radios, computers, and books. 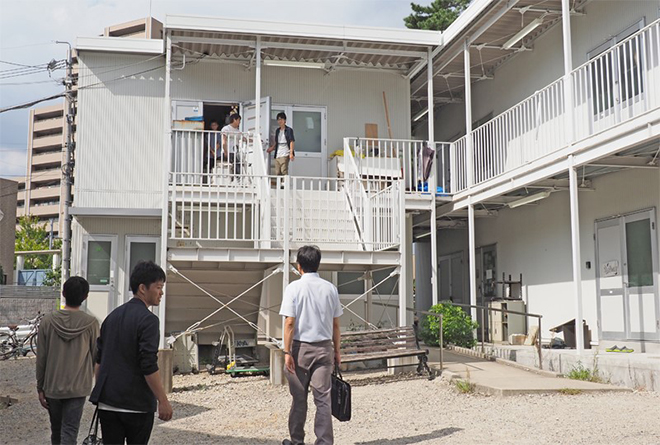 Their ham shack is on the 2nd floor, behind the Student Hall. 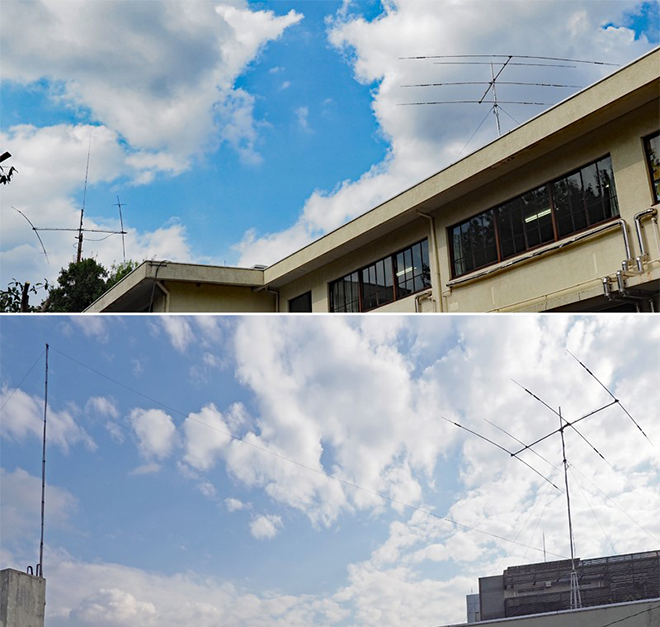 Antennas of the ham club

There are 18 members in the club. Seventeen of them are men, and one very rare pretty YL! (Unfortunately, I don’t have a picture of her this time...!) They are not necessarily students of math and science courses, and some students are studying in the doctorate program. 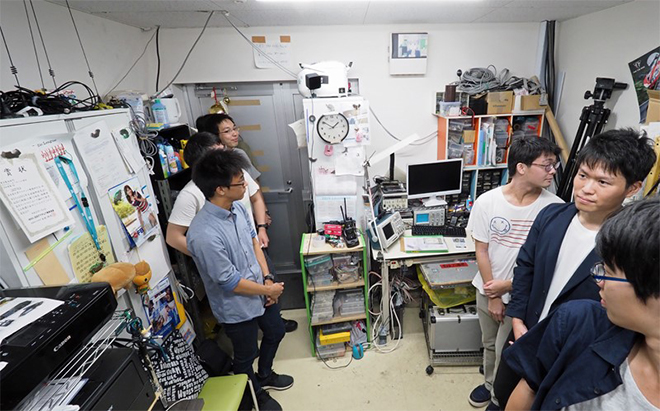 Seven of them welcomed me. 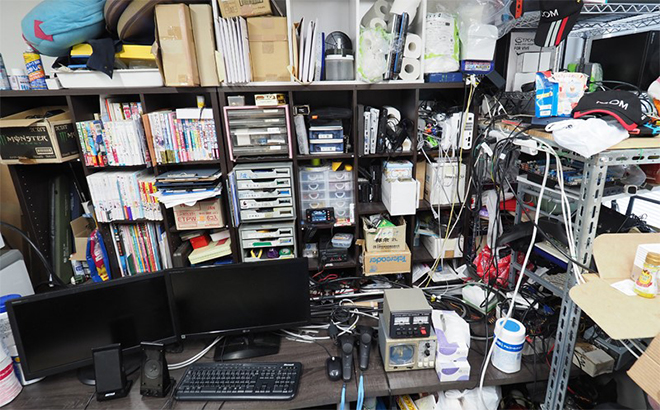 Shows a typical Japanese ham shack...full of books and devices.

Their activities can be divided into three activities—amateur radio, computers, and working on electronics, but they don’t have any particular teams. It’s an “Anyone can enjoy anything” style. They have a regular meeting once a month, two general assemblies each year, but basically, everyday attendance is not mandatory. They are always free to go there and work on their favorite things anytime. 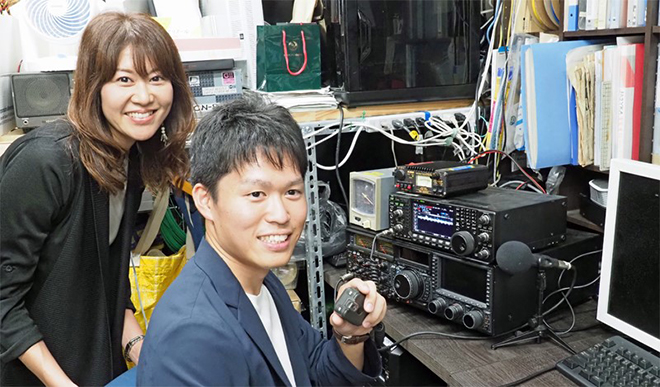 A 1st class licensed operator JR2WJM with the IC-7600

Contesting is one of the most proactive things among their amateur radio activities. The Japan Amateur Radio League holds a “6 m and down” contest every July, and they have never missed participating in it. With their other club callsign, JR2ZIA, they have won 1st prize in the past. “This contest is the only life for me!!” the chairperson enthusiastically told me. 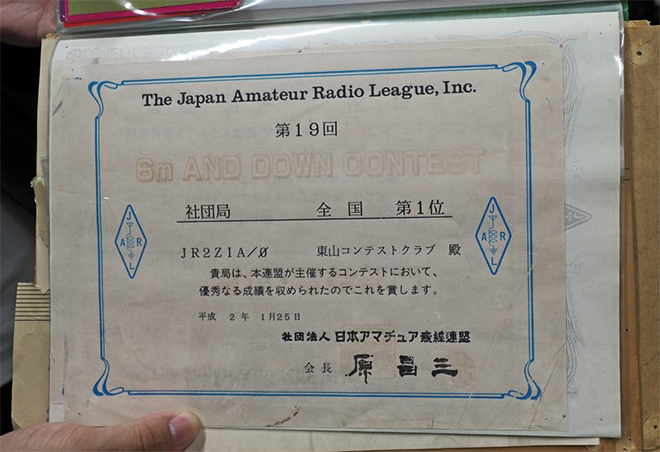 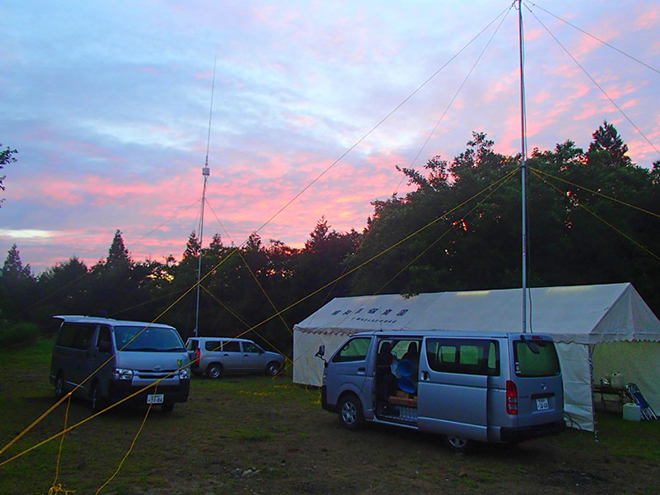 When participating in the “6 m and down” contest, they rent a car, make a camp, and operate. 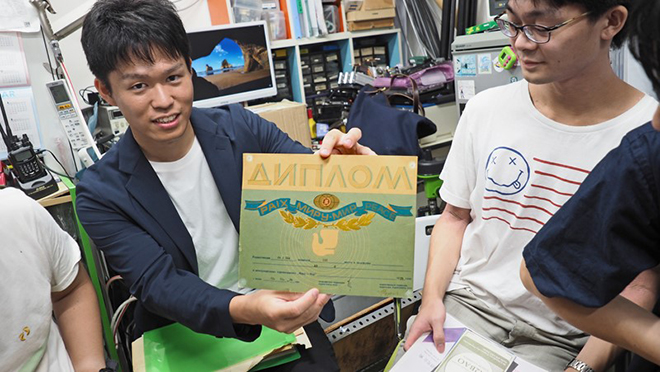 An aged award passed down from their seniors. They don’t know what it says because it’s written in Russian! 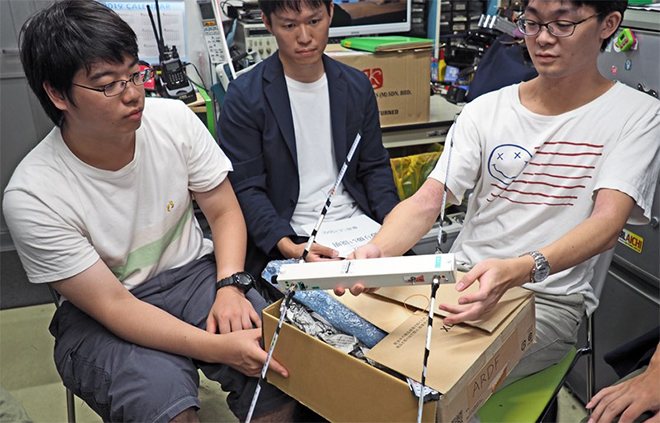 They also participate in ARDF.

They are also interested in creating their own original video games. This year, they made a VR shooter game, in which a player holds a Yagi antenna and shoots enemies to protect their university. Sounds like a lot of fun! 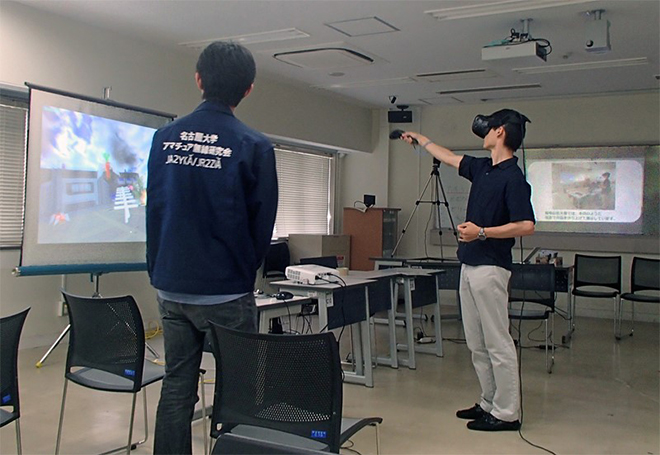 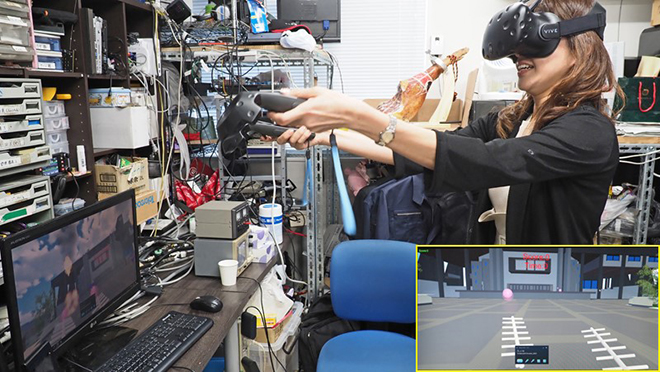 I tried the game and it was actually fun!

Well, one thing that I had been very curious about since I entered this shack was sitting neatly on a rack. Apparently...it is a whole leg of a pig...!? 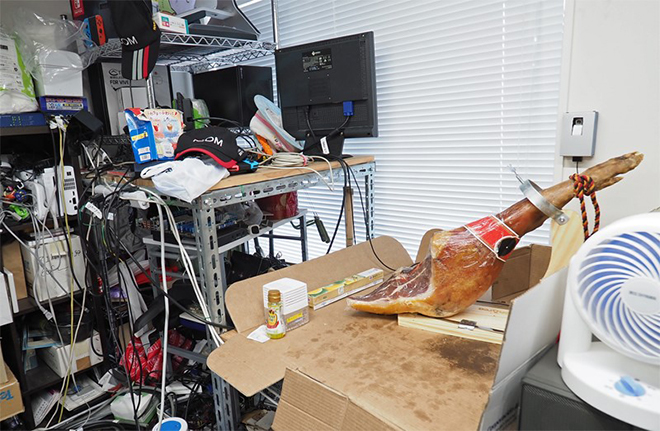 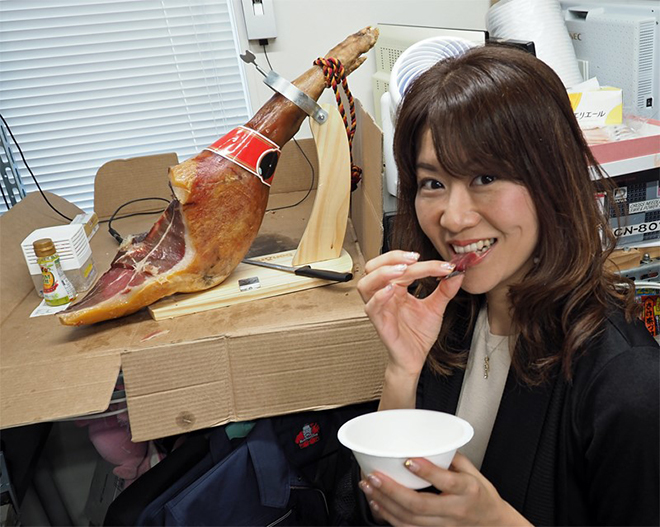 In the end, that was absolutely delicious! Great with cheese! It must be super good with wine...I wished they had prepared a glass of wine too, haha! Ham operators eat Iberian ham. That’s what it is, isn’t it?

●JS2BYI (Chairperson)
I’m studying in the Department of Electrical, Electronic and Communications Engineering, Faculty of Engineering. This is the university that I have been longing for since I was 15! I’m happy to be here. My favorite band is 2 m SSB.

●JR2WJM
My major is electric engineering and I’m studying in the power electronics field. I got a ham license when I was 9, and now I have a 1st class Japanese license. I like the SHF bands. Recently I built circuits by myself, and made a local oscillator, which can be used for the 144 MHz to 2.4 GHz transverter. 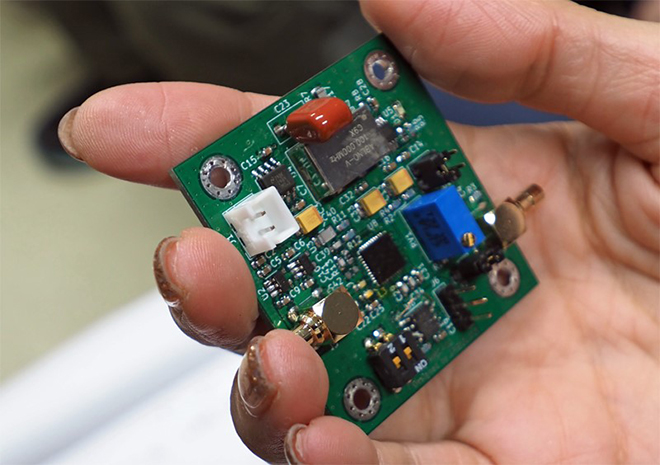 1.9 GHz local oscillator for the transverter

●JJ1QQA
I’m studying in the faculty of informatics. I also like 2 m SSB. 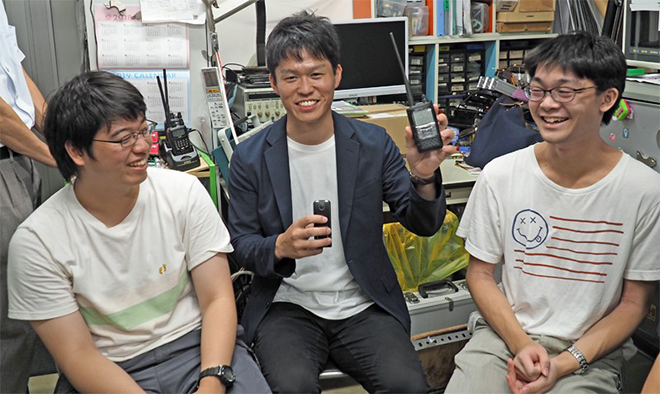 I was impressed that everyone sets their goals high, work really hard on both their studying and amateur radio activities, and encourage each other. Thank you everyone! It was very nice meeting you all!