The 1st article is Transmit Signals: A clean sky by having clean signals.
The 2nd article is Receiver audio: Talking about receive audio.
The 3rd article is RMDR: Increasing the chance of a QSO with rare entity stations.
The 4th article is aspecial topic: A thorough inspection of Overflow (OVF).

The 3rd article: Your chance of making a QSO is proportional to the RMDR value.

The meaning of the title may be difficult to believe that quickly. However, recently more focus has been put on RMDR than was previously put on IP3. To get more DX entities, to pick up a weak signal in a heavy pile up, to win a contest, a high power and a high-gain antenna are an advantage. But when you cannot hear a signal, there is no chance to make a QSO, even if you are running 1kW or more. An example is when a very strong station’s signal overpowers a weak rare DX station’s signal. Such QSO chances are unconsciously being missed. So, it is the RMDR we inspected this time that has become the problem.

RMDR stands for Reciprocal Mixing Dynamic Range and is a valuable measurement used to characterize the receiver’s performance. A high RMDR means that the transceiver can receive a target signal easily (Quoted from the Icom brochure), even in the presence of interference, and the receiver can reject adjacent interference. 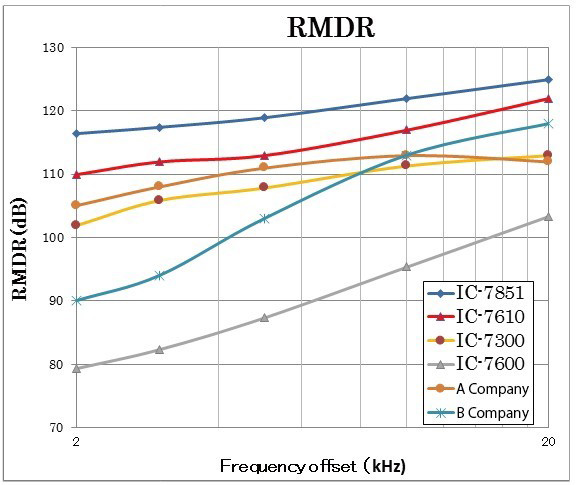 At a 2 kHz offset, the RMDR value of the IC-7610 reaches 110 dB, which is close to that of one of the highest class transceivers, the IC-7851. Even the IC-7300, which is a good cost performance transceiver, has a value of just over 100 dB. That is extraordinary RMDR, and quite a surprise.

When the reasons are investigated, we find that an extremely low phase noise clock oscillator is a key factor. The extreme low phase noise clock was adopted as a master clock in the IC-7300 and the IC-7610, and a very low noise device is also incorporated in the clock’s power supply circuit. As we have introduced the direct sampling method in the receive circuit, a high RMDR has been achieved, even in the mid-class and entry-class transceivers.

You will be able to realize that the RMDR of the IC-7300 and the IC-7610 is excellent. The examples are just values, and it is hard to understand the difference in actual operation. So, the IC-7600, IC- 7610 and the IC-7300 were put through a bench test, as shown below.

・A standard signal generator (SSG) to produce a strong station signal (Interference signal), and a transmitter to produce a target DX station signal are used. Apply both signals, through a combiner, to each transceiver as Equipment Under Test (EUT).

・Set the transmitter output power for no S-meter indication on the EUT S-meter, but at a level where you can hear the CW signal.

Before talking about the RMDR comparison, let’s look at the differences of the receiver performance under different levels of phase noise.

Set the IC-7600 and IC-7300 as the EUT on 14.200 MHz/CW. Apply a CW keying signal to each EUT from the transmitter, and apply the strong station signal (the interference signal) to the EUT from the SSG, above the receive frequency, in 100 Hz steps.

You can clearly hear and copy the DX station’s signal, even if the strong local station appears just 200 Hz above on the IC-7610, as you did with the IC-7300. In addition, you can hear the signal much clearer than with the IC-7600 because there is almost no LO phase noise in the IC-7610 and IC-7300.

We made another test with an interference signal 10 dB stronger, and compared the performance between them.

Technology evolves with time, but the performance evolution from the IC-7600 to the IC-7300, or the IC-7610 is drastic. It is amazing. When the IC-7600 was sold, its performance and functions were held in high esteem around the world, and was a long-time best-selling radio. Now we understand that the performance of the IC-7300 and the IC-7610 are much better than that of the IC-7600. We found that a signal can easily be picked out by a transceiver that has great RMDR characteristics. It can also be said that a higher RMDR number gives you a better chance of making a QSO.

"When blocked by an extremely strong signal of a local station, I could not hear a call back from the DX station because of the strong station signal. However, now I can hear the call back to my station.”

"The chance of hearing a signal of a rare entity, which is close to a strong station signal, has increased."

These are examples of what a difference a high RMDR can make.