The 1st article is Transmit Signals: A clean sky by having clean signals.
The 2nd article is Receiver audio: Talking about receive audio.
The 3rd article is RMDR: Increasing the chance of a QSO with rare entity stations.
Special article is Spectrum scope: Is the IC-7610 spectrum scope the best?
The 4th article is a special topic: A thorough inspection of Overflow (OVF).

After the IC-7610 was released, its spectrum scope gained a good reputation among amateurs worldwide. Concerning the RMDR and phase noise characteristics, the IC-7851 surely beats the IC-7610 specifications. However, the screen characteristics of the IC-7610 have especially become a hot topic.

There are no big differences between the IC-7851 and the IC-7610 in the table shown above. We can see that new technologies have produced more advanced performance in the spectrum scope. The cost performance for the IC-7300 is a salient feature, but its specifications are slightly lower, compared with those of the IC-7800 and the IC-7600.

The screen shots shown below were captured using the screen capture function. The actual screen views are similar to the one shown below, and they are exquisitely clear and sharp. As the display is quite large, even when the Main and Sub bands are displayed in parallel, side by side, or in the over/under style, visibility is kept very good. 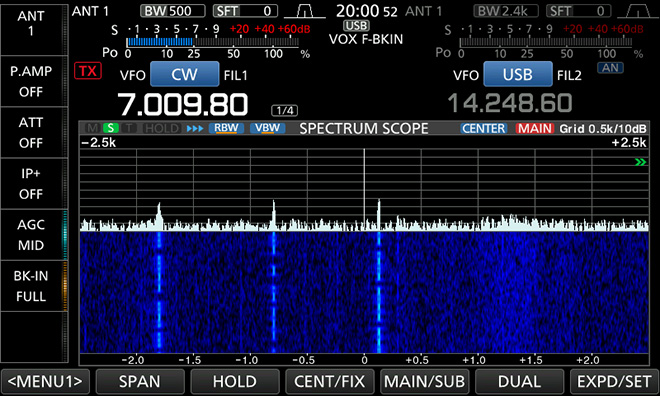 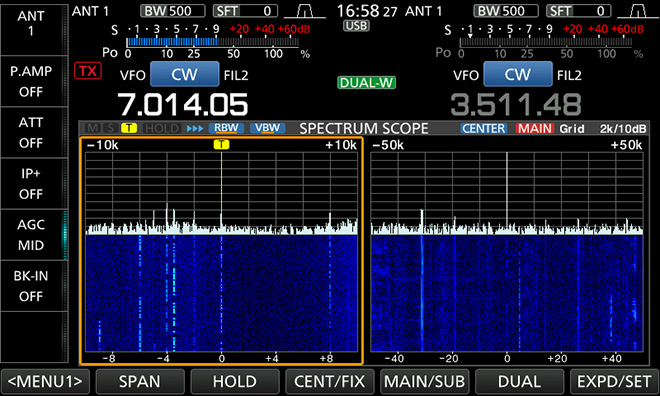 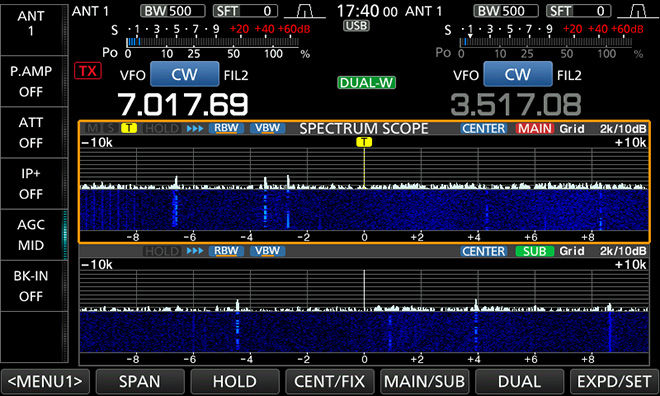 As you can see in the comparison chart above, the newer IC-7610 transceiver performance and features are great. In this section, the point of view is that the release of the IC-7610 is 9 years after the IC-7600 was released.

The video shows a comparison between the IC-7800 and the IC-7610. As most know, the IC-7800 was a flagship model, and was released in 2003. Amateurs were surprised by its transmit and receive performance, as well as its spectrum scope performance.

This is a most interesting comparison combination. One is Icom’s current flagship model, the IC-7851. The other is Icom’s new mid-range model, the IC-7610. As you can see in the screen comparison chart above, there is not that much difference between them. When we observed the screen quality on video, both sweep speeds seem to be the same. But the IC-7610 screen is slightly clearer and sharper when observing real CW signals that are displayed on the waterfall screen. We can clearly see the CW dots and dashes as a white signal line. The difference is not in the scope performance, but it is the difference in receiver configuration between the previous super heterodyne and the direct-sampling methods.

When we compare the spectrum scope quality, we are again surprised by the evolution of its advanced technologies.

This time we did not compare the IC-7300 spectrum scope, but we can say it is also one with a high level of performance.