Hello, this is Erii, an author of this article. My callsign is JP3JZK. I am in charge of this serialization...not only a writer, but also a planner. Masako and I chose the first destination according to our conversation a few days before.

Masaco: Erii, did you know that I’m a bicycle enthusiast? When I was a child, my dad, my brother, and I used to go cycling in the early morning before we went to school.

Erii: Wow, I didn’t know that! Was it training to be an athlete?

Masaco: No, but my dad was obsessed with cycling at that time, and I was influenced by him. He gave me a real road bike. I was able to fix a flat tire! Can you believe that? I even wrote a song about a bicycle!

Erii: OK, now I know where to go for the Social Studies article...Let’s go to the Bicycle Museum!

Last December, Masaco and I visited Bicycle Museum (The website is written in Japanese only.) located in Sakai city, Osaka. We were guided by Mr. Hasebe, who is curator of this museum. He is rich in the knowledge of bicycles, and he also knows a lot about Sakai’s history. 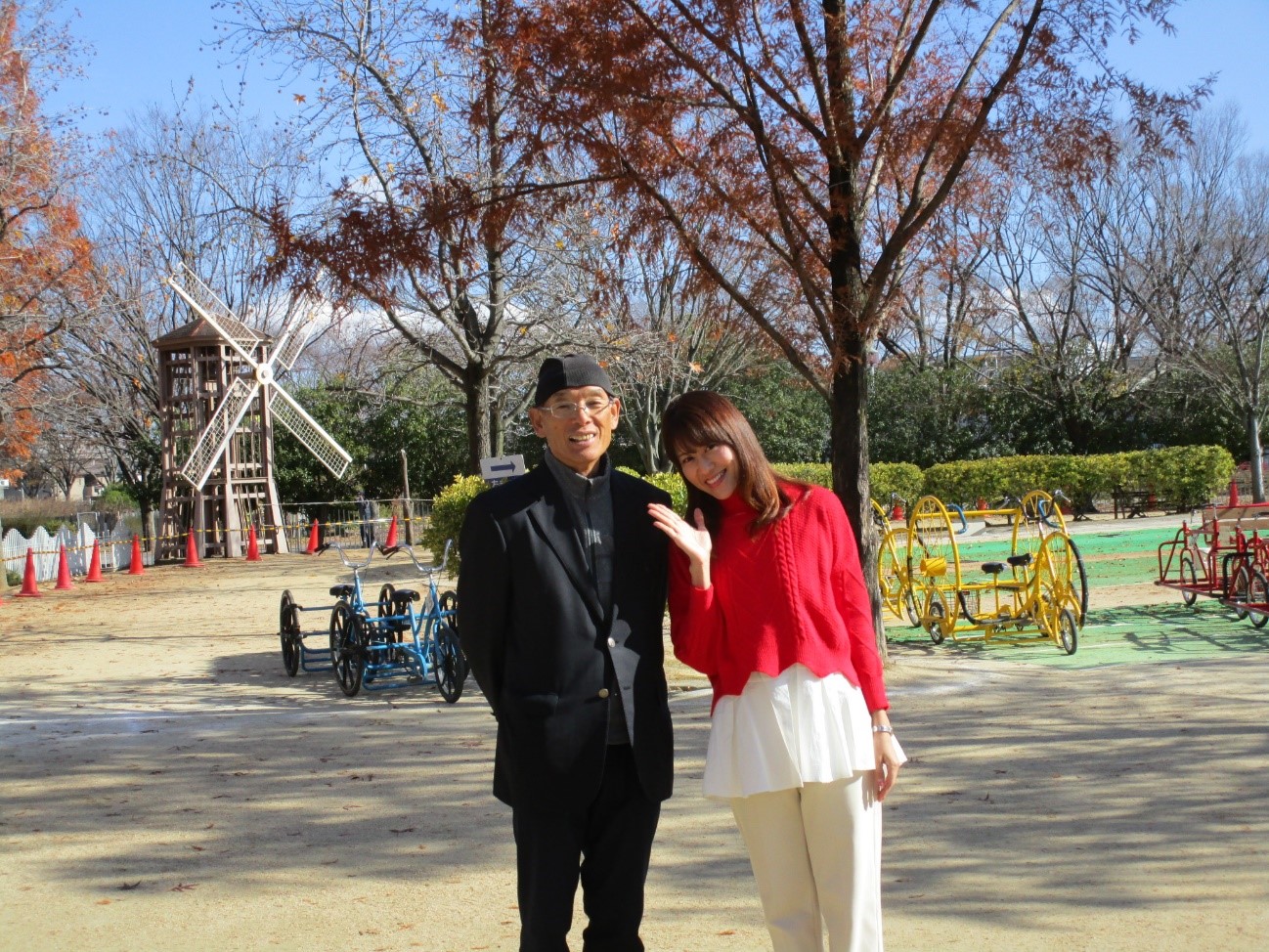 Sakai city is located in the southern part of Osaka prefecture, and has prospered as a center of Japanese economy and culture amazingly for 1600 years. There are “Mozu-Furuichi Kofungun”, ancient burial mounds that are registered as World Heritage sites. Bicycle Museum is just beside “Nintoku-tenno-ryo Kofun”, one of the mounds. Everyone who took Japanese History class would know the kofun, since it is the largest mounded tomb to enshrine an ancient Japanese emperor. 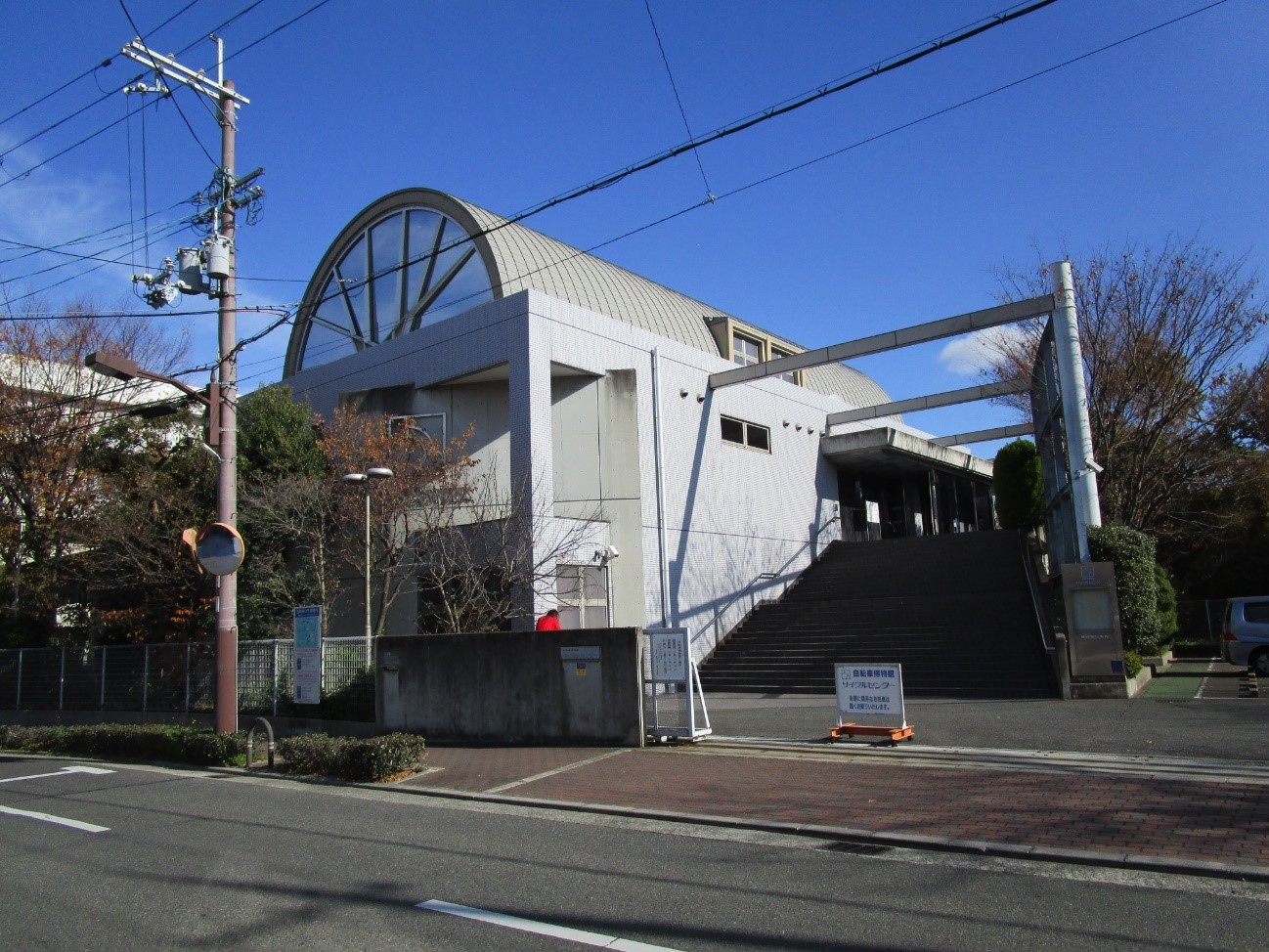 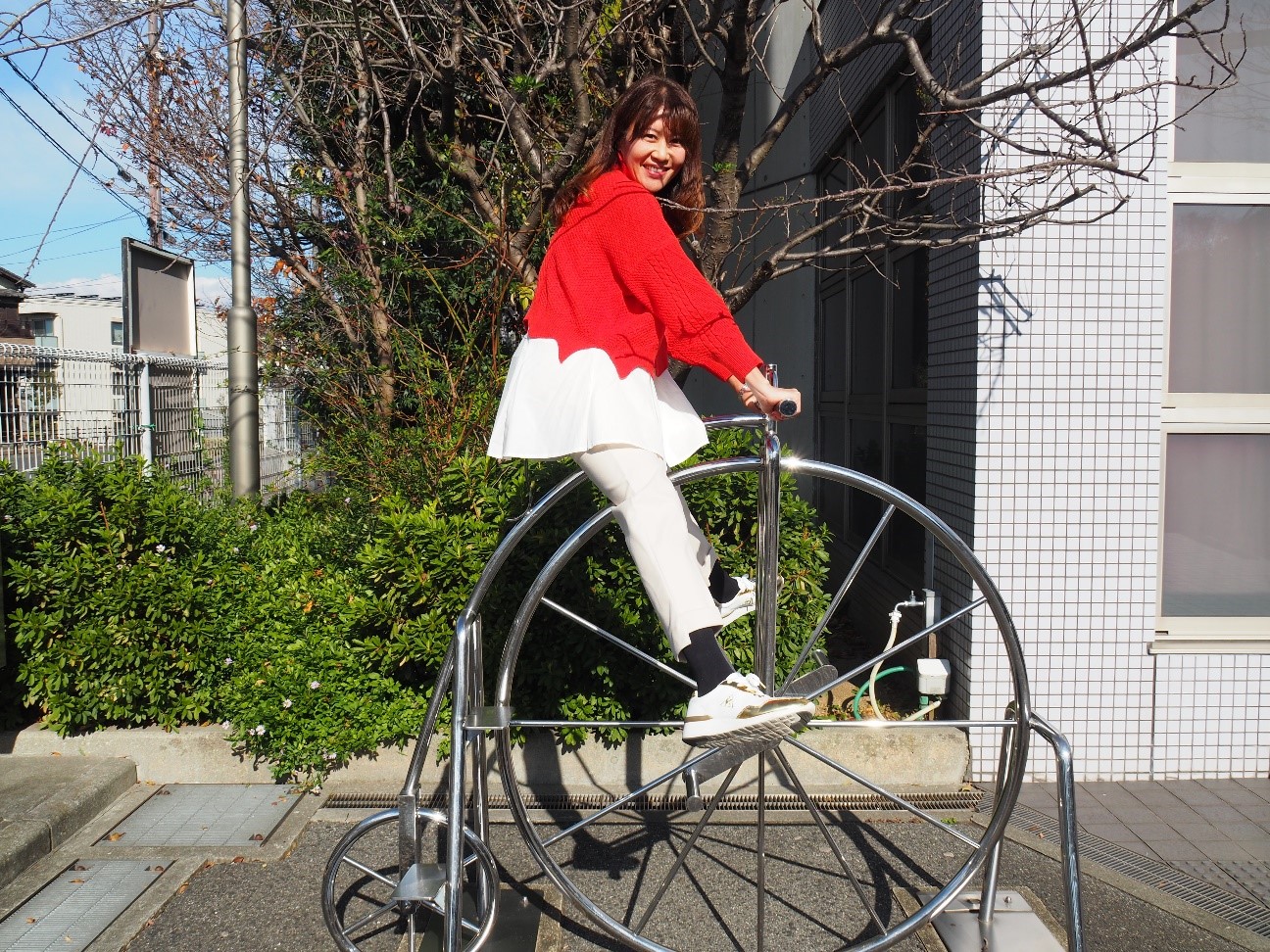 Masaco, riding on an art replica of a classic bicycle, “Ordinary”

Why is Sakai famous for its bicycle industry? The origin dates back to the Kofun period. Around the fourth to fifth century, the spade and hoe processing technologies required for building kofuns was introduced from China to Sakai. In other words, from ancient times, there have been many iron processing professionals in Sakai. In 1543, guns were first introduced to Tanega-shima island, and after that, the demand of guns increased in Japan. As I mentioned above, Sakai already had high quality iron processing technology, which enabled mass production of “Sakai Guns” in the Age of Provincial Wars. Another local specialty of Sakai is “Sakai Knives”, gaining professional chefs’ deep trust all over the world. Sakai’s iron processing technology with the highest standards are being passed down today. 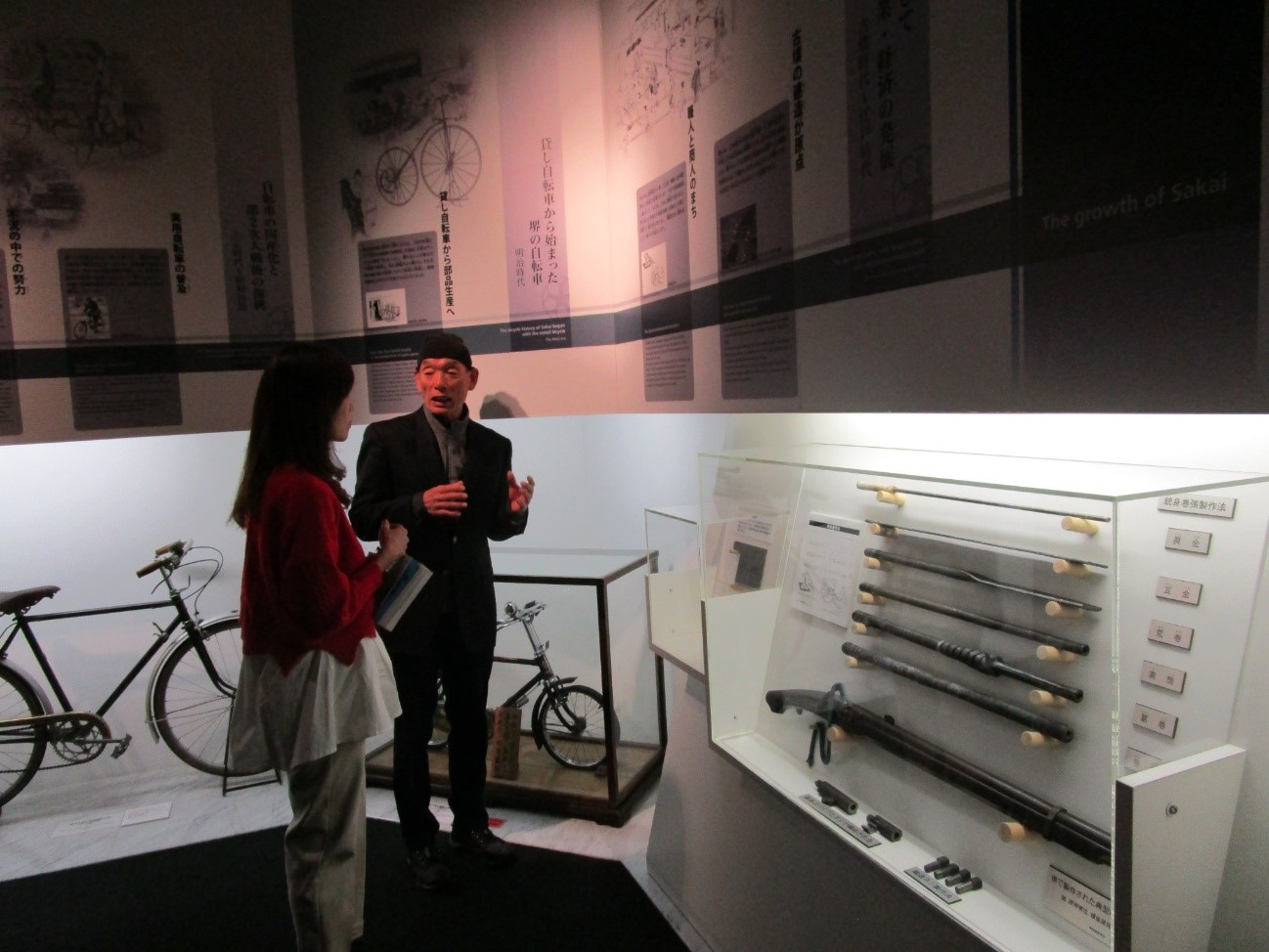 Now, let’s get back to the topic of bicycles. It was the end of the Edo period (around 1860s) when bicycles were first introduced to Japan. Foreign people in the foreign settlements such as Kobe started riding bicycles that were brought from their home countries. Japanese people started to ride bicycles at the end of the Meiji period (around 1868 to 1912). At that time, a bicycle was very expensive...it cost the same as a house! Therefore, people used affordable bicycle rental services. In Sakai, iron processing professionals who produced guns or knives started to repair those rental bicycles. Taking advantage of their repairing expertise, they started making bicycle parts or bicycles themselves, which led to the bicycle industrial expansion in Japan. Because their iron processing technology has been developed from ancient times, Sakai is famous for its bicycle industry with its high-quality and high-performance bicycles and bicycle parts produced there.

By the way, around 30,000 people visit this museum annually but surprisingly the half of them are elementary school children! They come to the museum as a part of their lessons where they learn about local industries. Also, health-conscious people in 50s or 60s visit there and ride bicycles, since the museum has some cycling trial programs. There are three types of exhibitions — “Bicycle of the World”, “Bicycle and Sakai’s History”, and “Life with Bicycles and Bicycle Mechanism.” There, you can discover the good points of bicycles that are effective in the Environment, Health, and Society, from different perspectives. 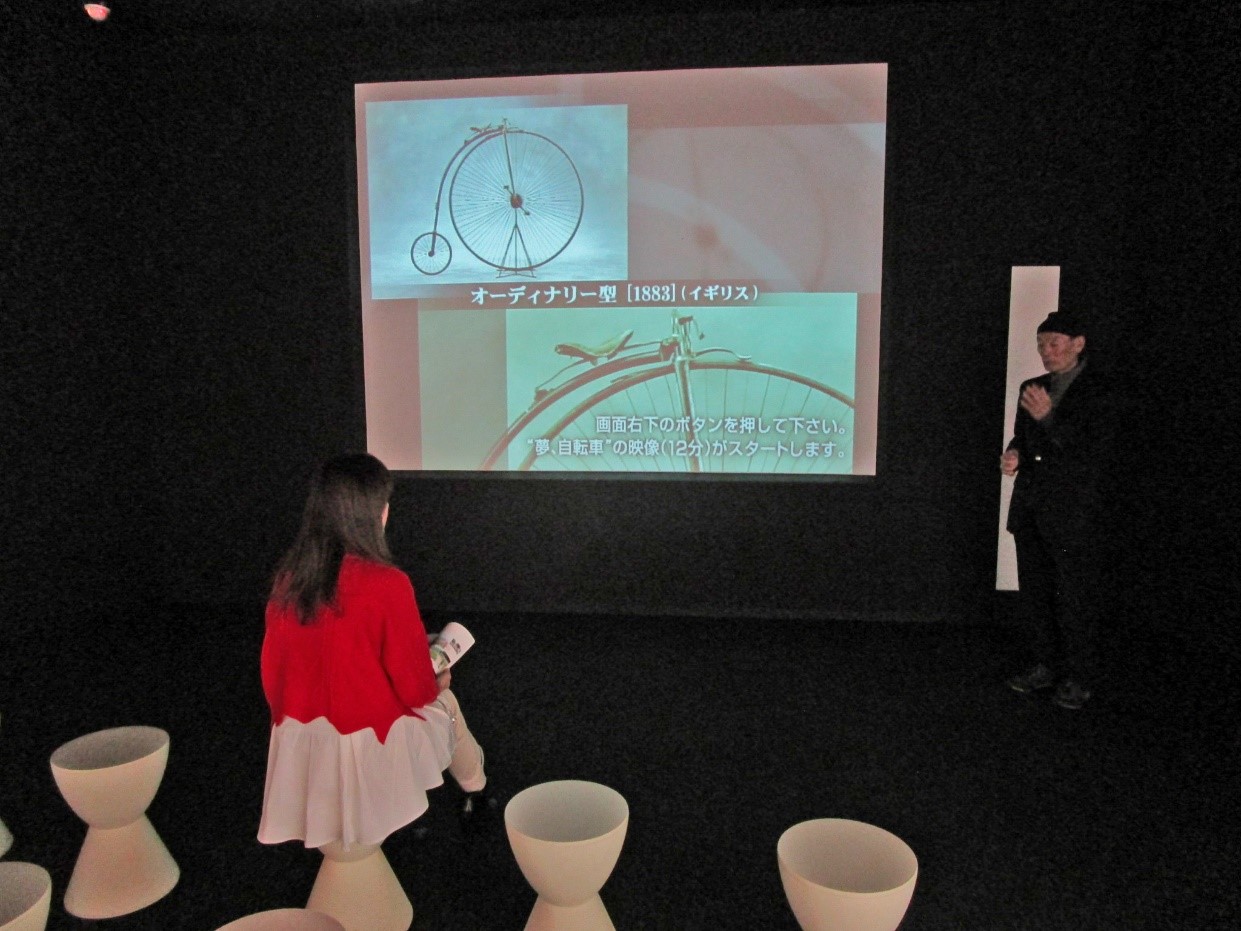 Masaco, learning about history of bicycles. 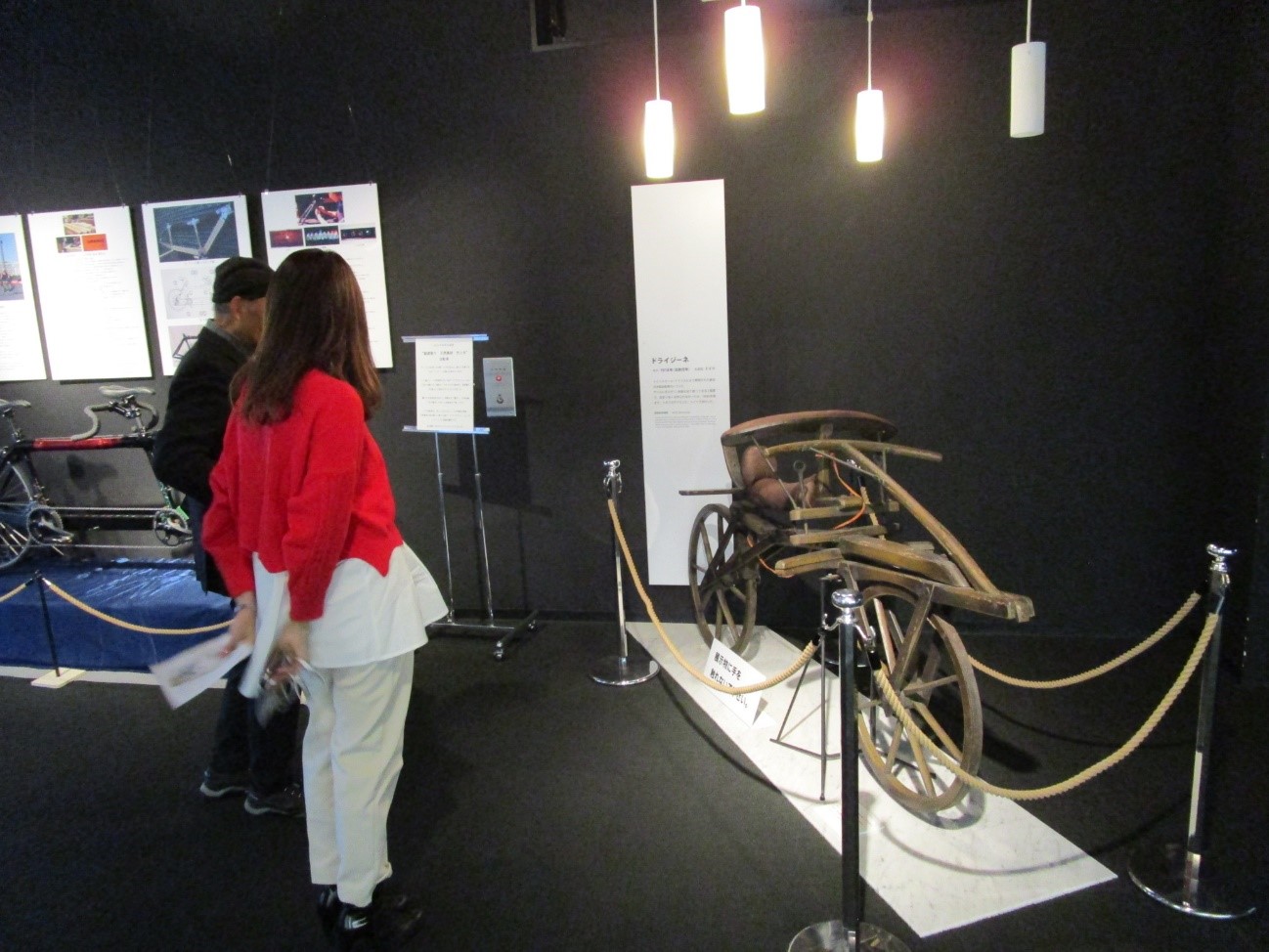 Shows a dandy horse, a forerunner of a bicycle. It has to be powered by the rider’s feet, walking or running.

They came to the exhibition where you can see the progress of bicycles over the years. Masaco was so happy to see a great variety of bicycles. Classic bicycles are so different from modern bicycles, so Masaco was wondering if she could ride one or not. A bicycle that was used in the historical Invasion of Normandy or a bicycle that has the world fastest speed record of 150 km/h (932 mi/h) are displayed in the area. We are very sorry that we cannot introduce all of them, so please visit there and actually see them! 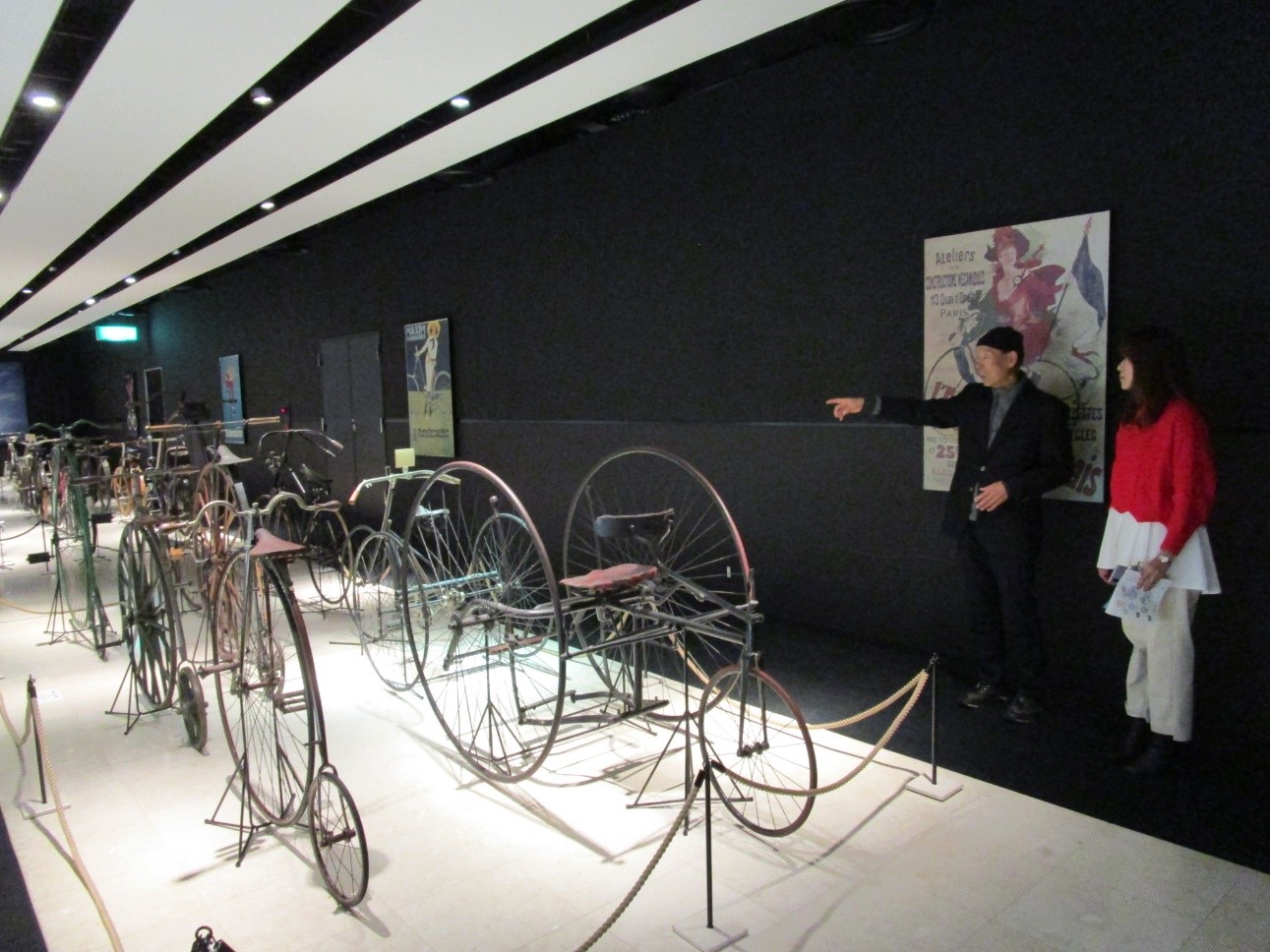 You can see many kinds of bicycles!

In the exhibition, Masaco found a road bike and gave a big smile. Because it is a carbon made bicycle, the weight is just around 7 kg (15.4 lb). A woman can easily hold it by her hand.

Masaco: This is the one I used to ride! 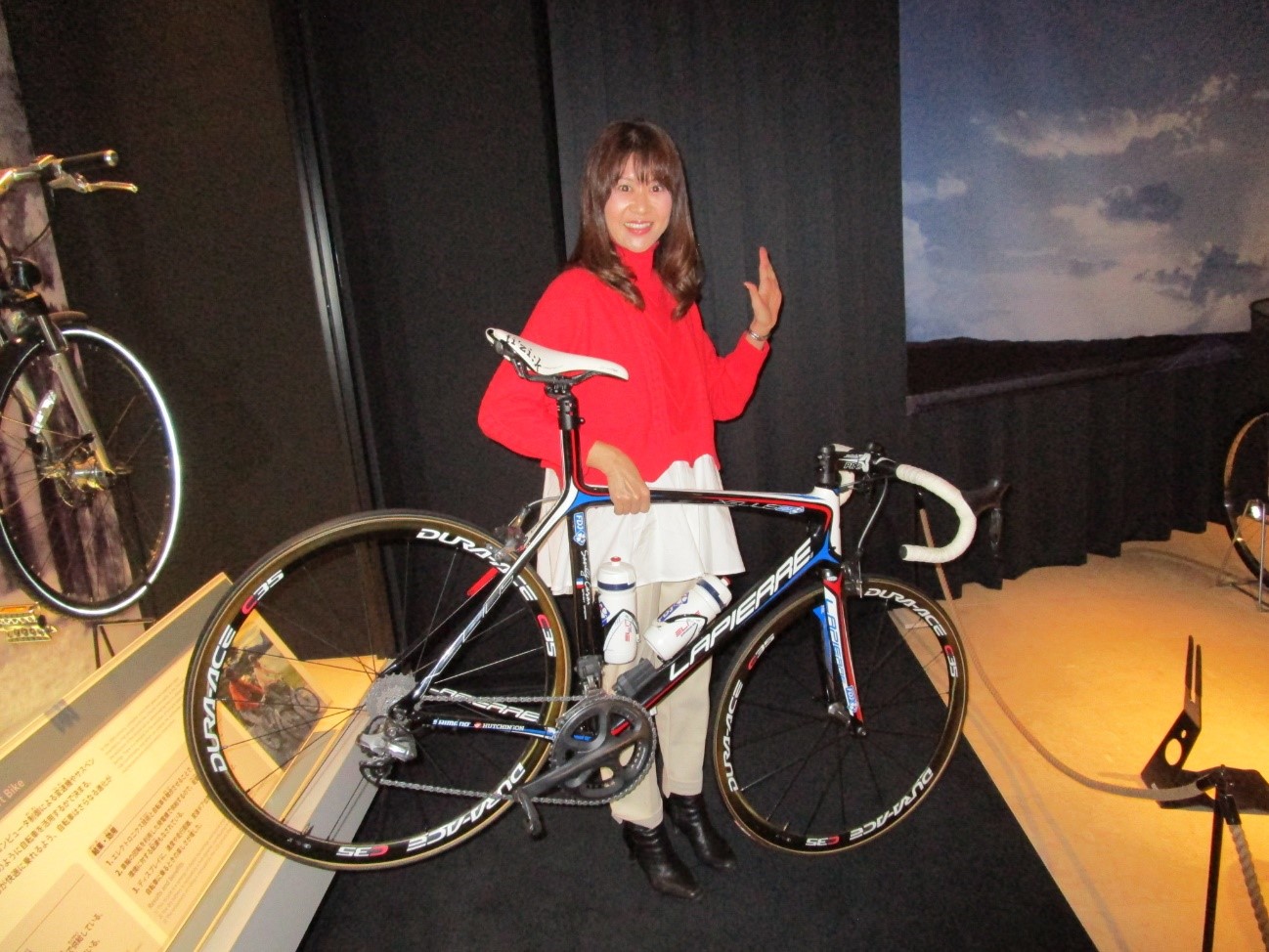 Mr. Hasebe: I’ve got a special bicycle today especially for you Masaco!

He took us to another exhibition, which was under construction. Masaco luckily got an opportunity to glance at...a bicycle that is going to be used in the next Tokyo Olympics!!! 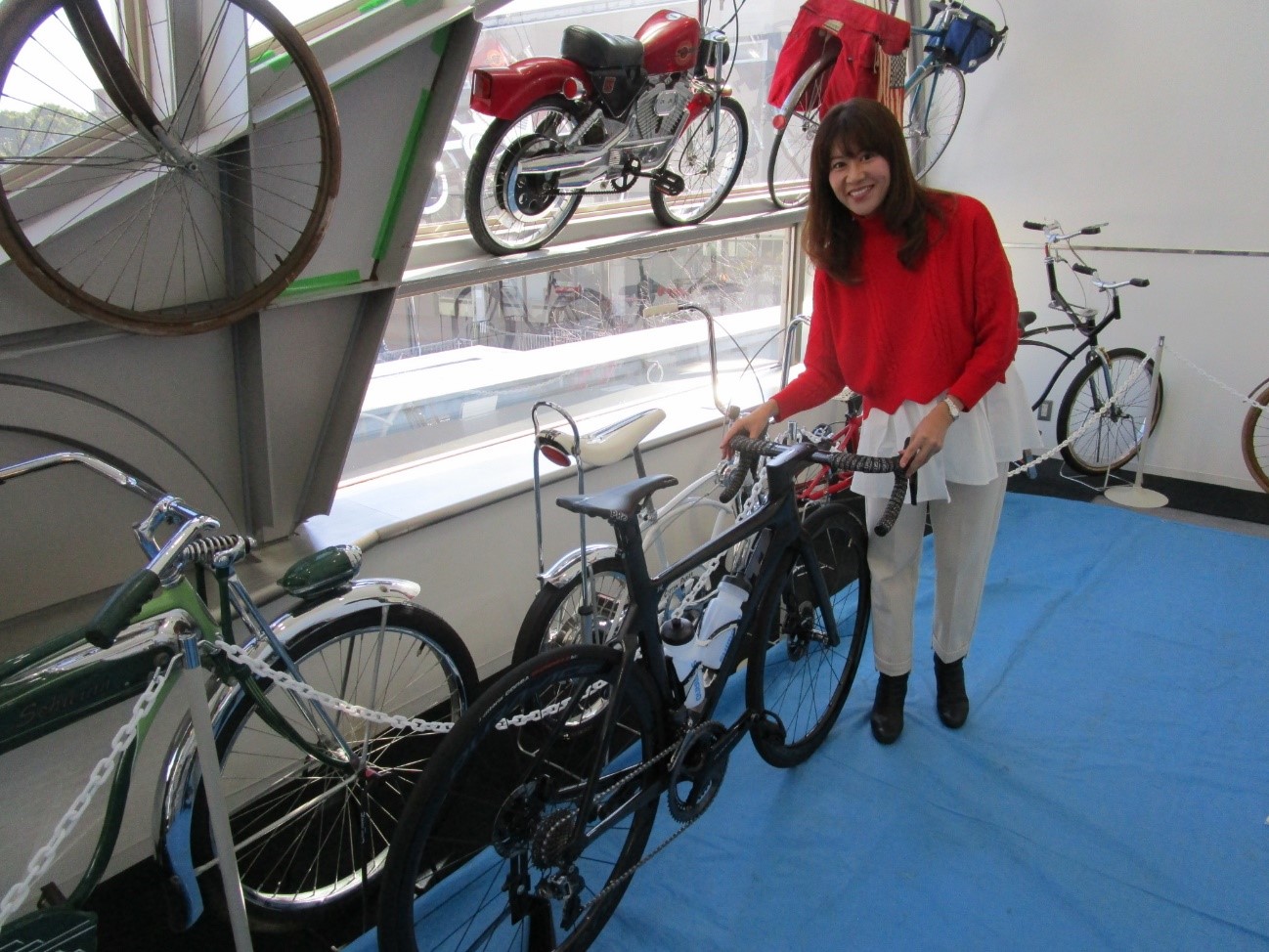 This is the bicycle that will appear in the Olympics games...I’m so lucky to actually touch it!

In the Bicycle Mechanism exhibition, you can study each role and function of a transmission gear, brake, and dynamotor. Masaco learned about disk brakes, which are commonly utilized in mountain bikes. A disc attached to a hub is squeezed by pads, making good use of hydraulic pressure to create a strong brake function. This type of brake is very useful in places such as steep grades or on muddy roads. 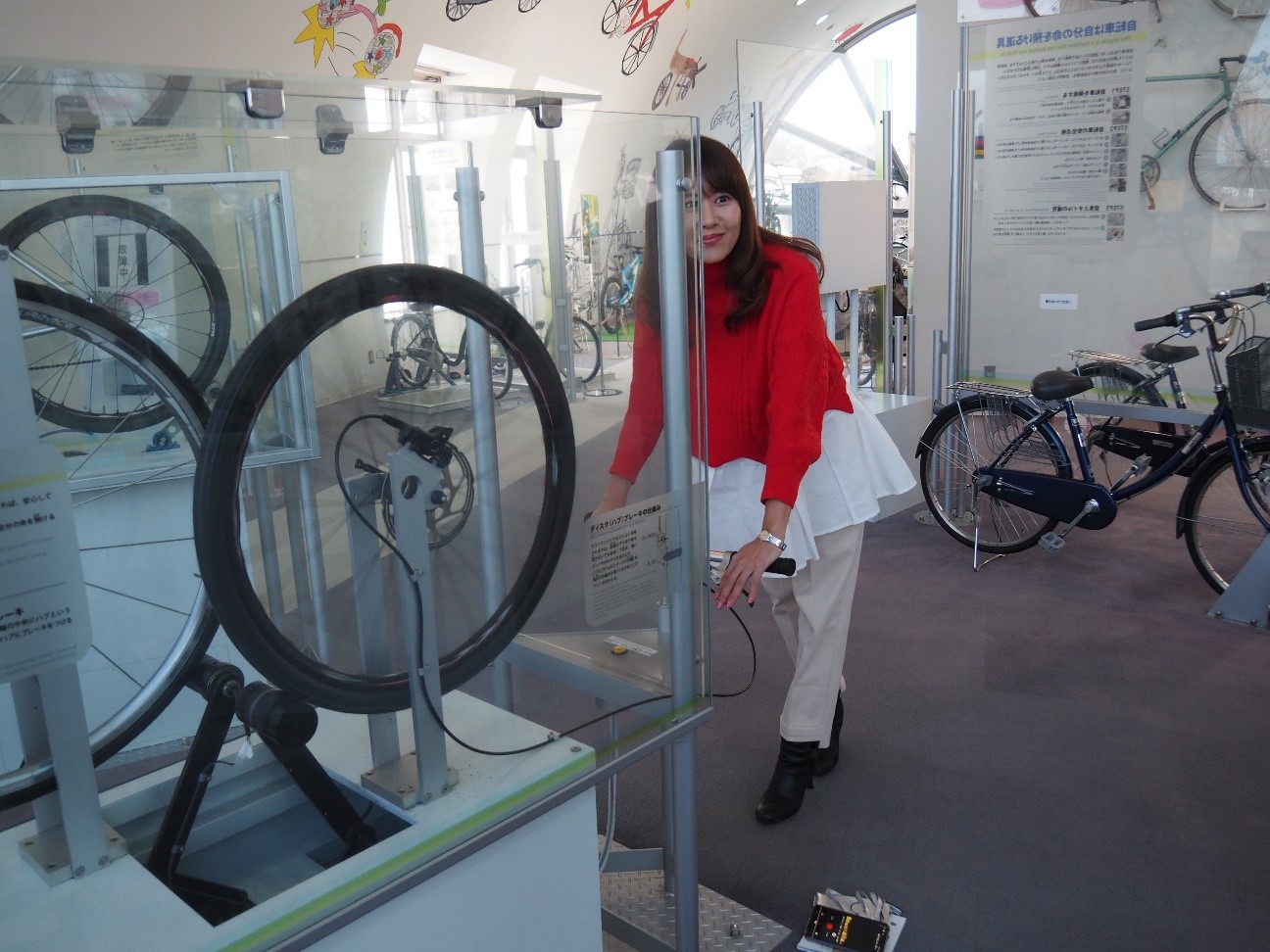 Mr. Hasebe: Well, I think it’s time to experience a trial ride of classic bicycles. Are you ready Masaco?

Masaco: Yes! I’ve been so ready for the trial ride!

On the second and forth Sundays, you can ride replica classic bicycles at an open space near the museum. If you are interested, please check the website of Bicycle Museum. (The website is written in Japanese only.) 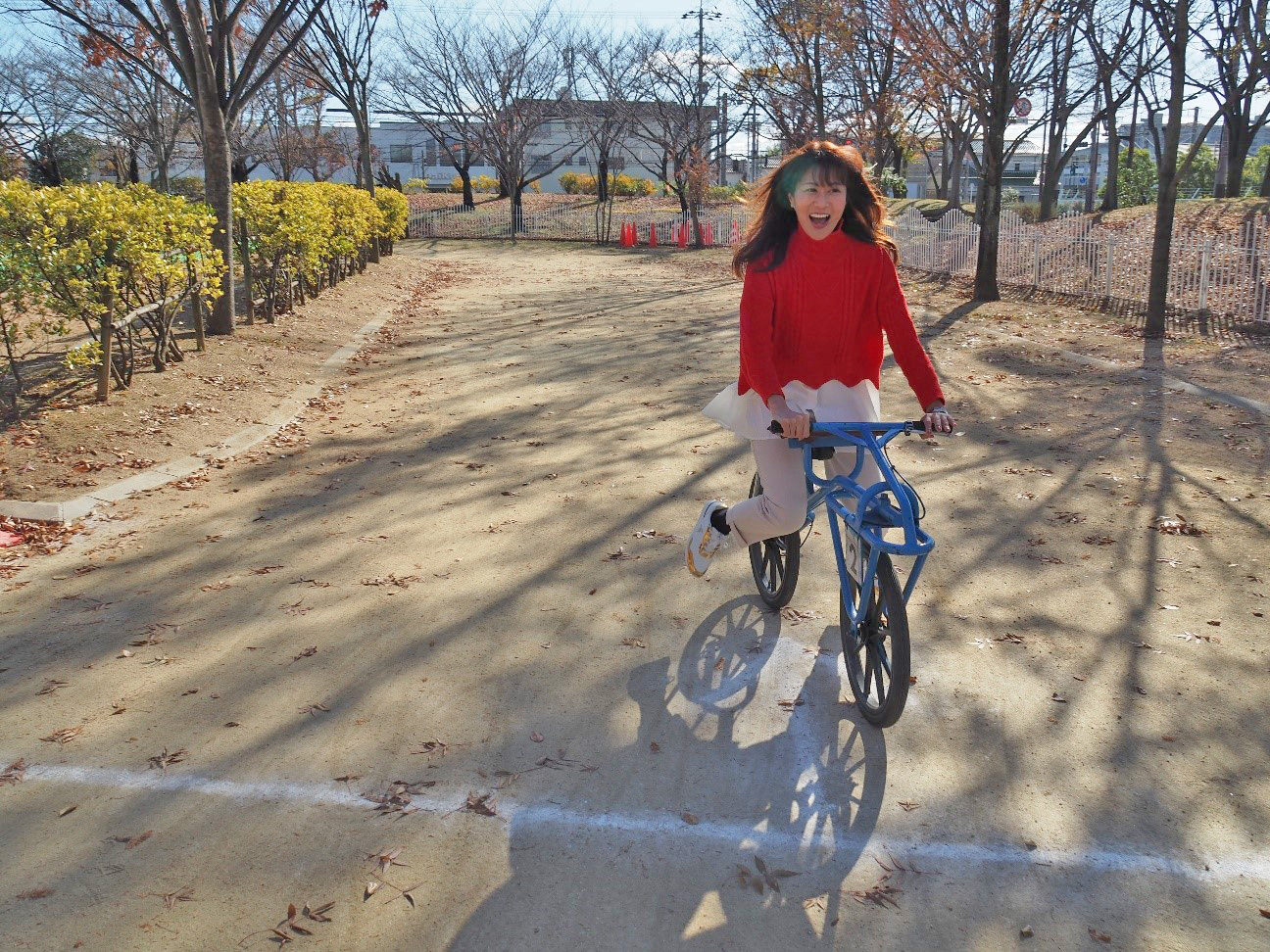 A dandy horse with Masaco

Mr. Hasebe: Next, a boneshaker (1861) should be fun! It was named that because of its extremely uncomfortable ride. 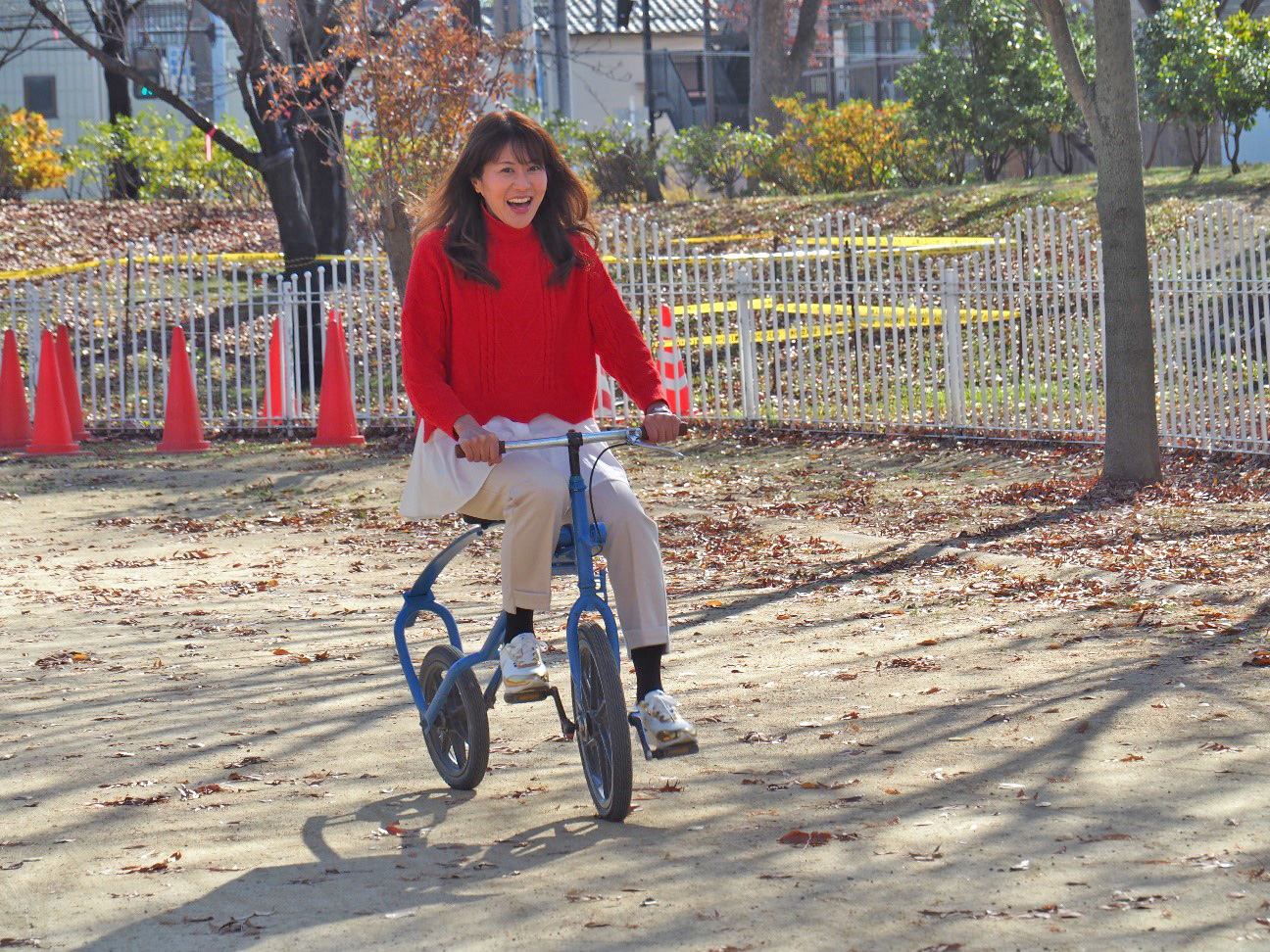 Mr. Hasebe: So Erii, why don’t you try riding? This is called a Starley Sociable, whose structure was a basis for the automobile. You can enjoy riding it together! 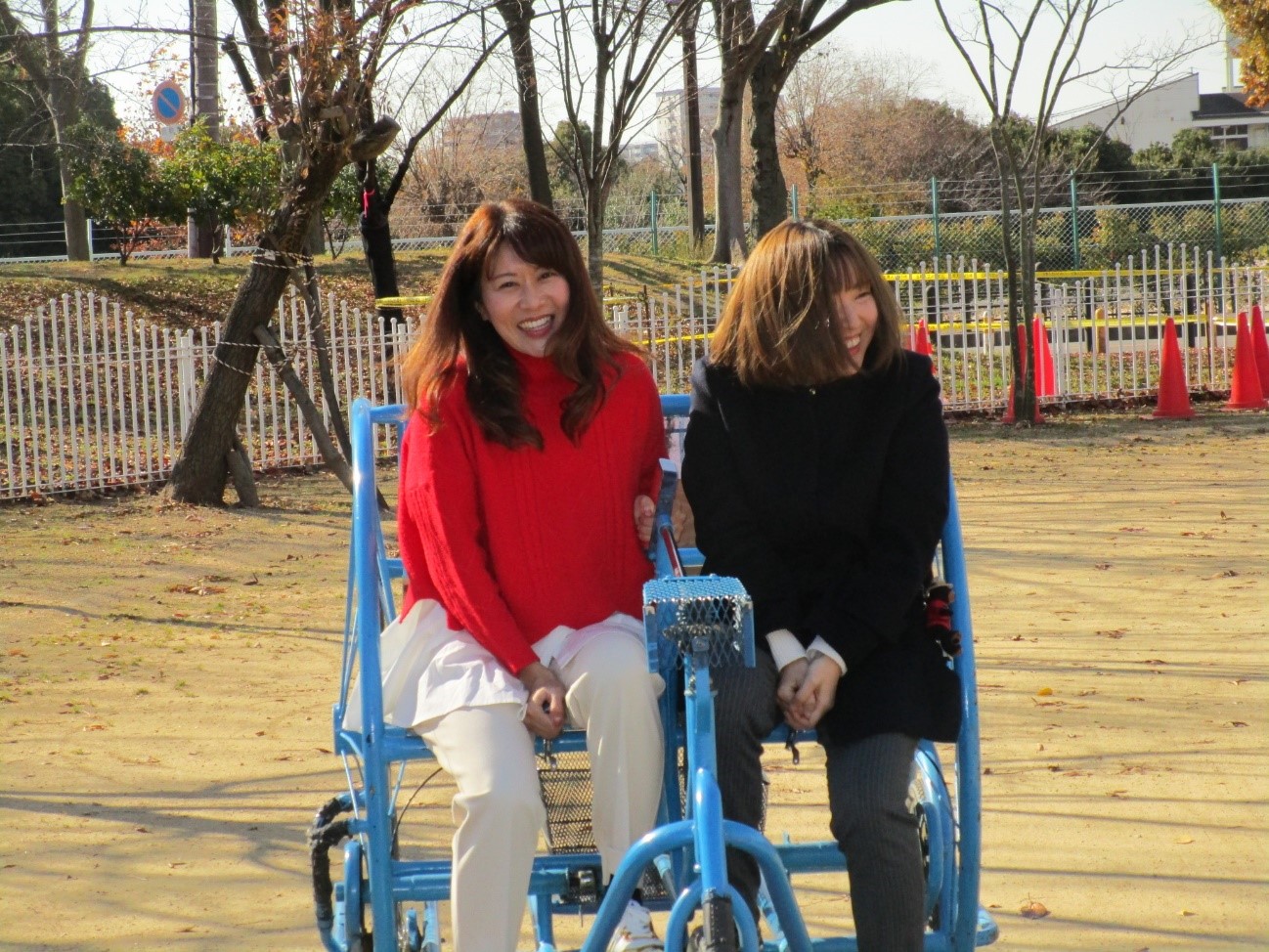 Mr. Hasebe: We are always willing to help people who cannot ride bicycles. We regularly have classes and teach our students how to ride a bicycle. Most of the participants, who are little kids, become able to ride it in a day. Of course, the classes are for free. We also have different classes in which you can enjoy a healthy cycling for about 30 km (18 mi), or road bike lessons. Our mission is to enlighten people that bicycles are wonderful for our health and are eco-friendly. Then we can develop the domestic bicycle industry and can enhance our quality of life.

Masaco: I’m so impressed with your goals! Thank you very much for today.

Masaco looked very happy to learn about bicycle history, and to ride various historical style bicycles. I would like to express my gratitude to Mr. Hasebe and all other staff members of the Bicycle Museum. 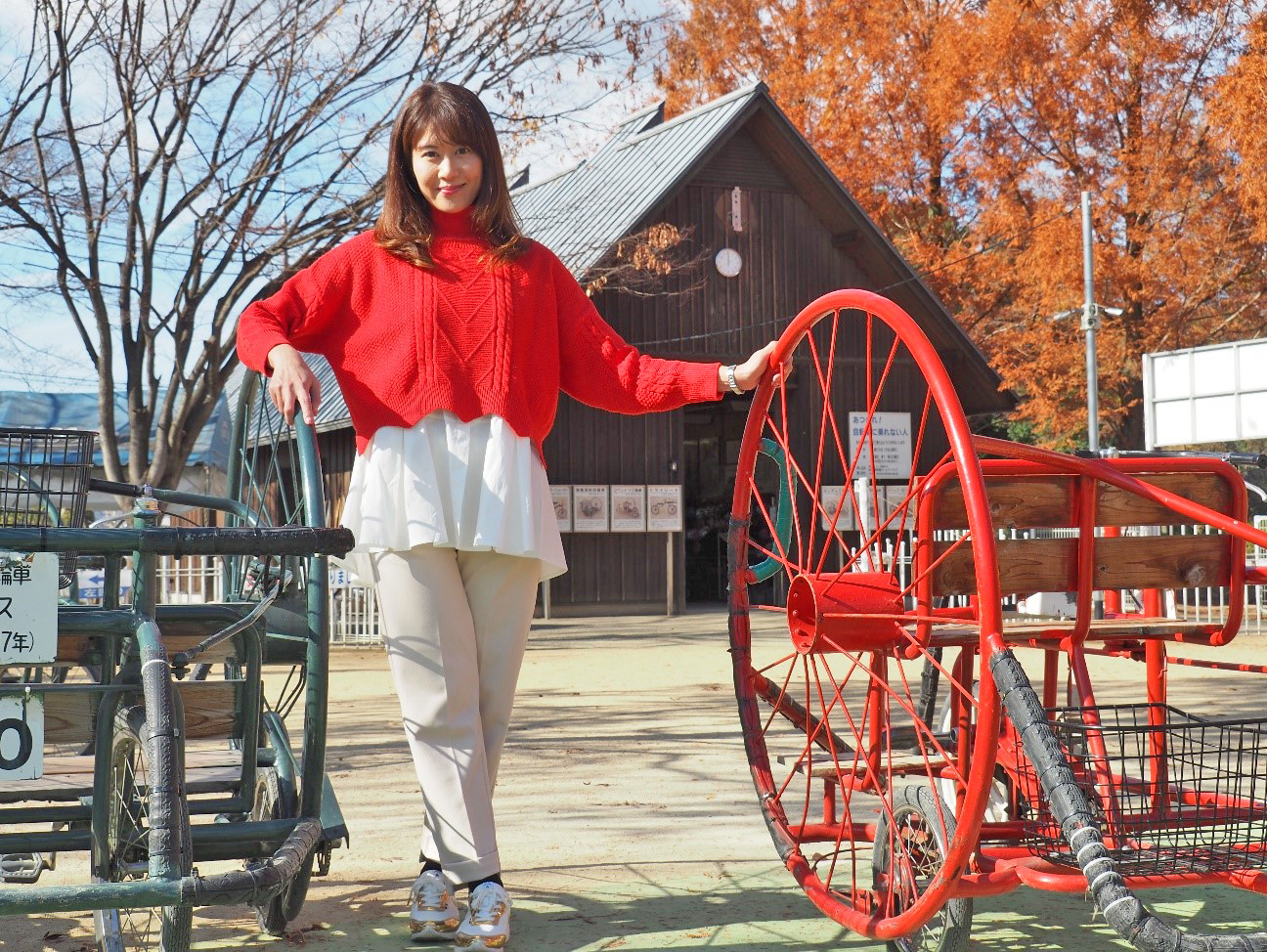 Visit the Bicycle Museum when you travel to Osaka!