Hello everyone! I’m Masaco, a Japanese singer and also a YL ham. This is a serial article called “Exploring the Ham Radio World with Masaco,” in which I introduce various Japanese ham clubs. Please enjoy each article, and learn about many amateur radio operators all across Japan.

This time, I went to Saitama prefecture near Tokyo to visit COMET Corporation. It is another famous Japanese antenna manufacturing company for amateur radios. I am a COMET user, so I was very excited to actually see them and talk about antennas! Please check this out! 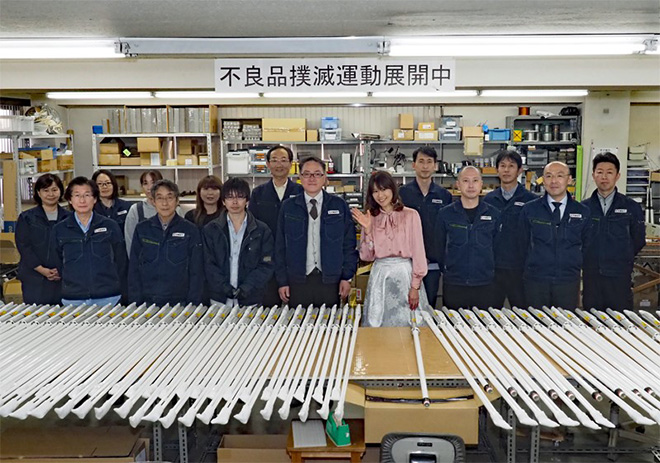 From the Kitatoda station on the JR Saikyo Line, it takes about ten minutes to reach their office. I found a three-story building with a sign that says “COMET,” in a nice and quiet residential area. This head office building is also their factory. 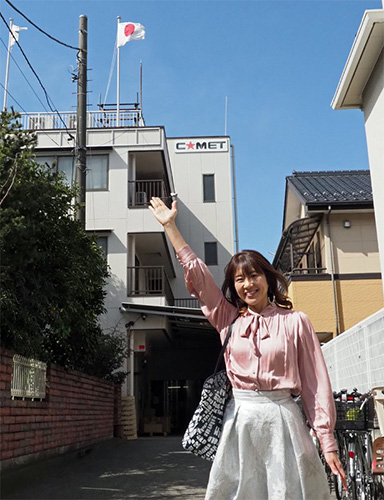 The company’s president, Mr. Toshikatsu Ikegami, was waiting for me in the president’s office that was full of their products and papers. 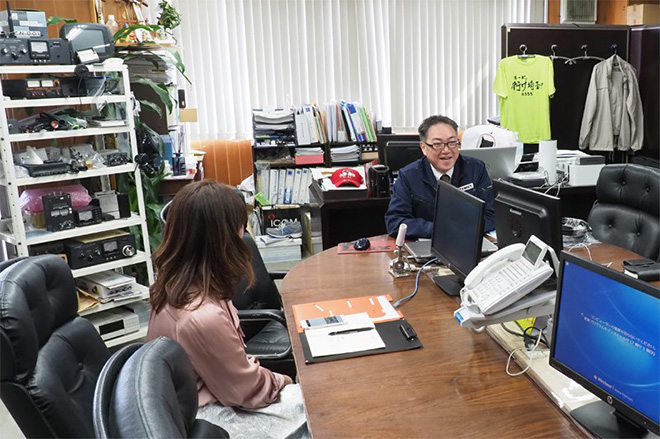 COMET Corporation. was established in March 1981 by Mr. Syoji Ikegami, the current chairman and the president’s father. At first, they were selling mobile whip antennas and notch filters for the 144 MHz band, and band pass filters for the 430 MHz band.

“I’ve never heard of notch filters for amateur radio...Are they common?” I asked.

“At that time in the 1980s, there were many pocket pager base stations and professional radio stations that emitted strong signals in the VHF/UHF amateur bands in Japan, so there were some problems of interference or sensitivity suppression. Thus, there used to be much demand for external filters. We offered high-quality notch filters and received quite good reviews.” 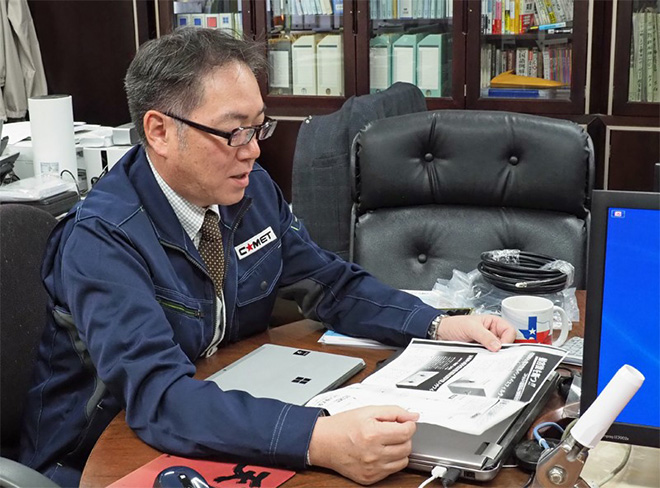 Mr. Ikegami, talking about the advertisement published when they had just started the company.At that time, he was not in the company yet.

After that, they developed mobile whip antennas, GP antennas, beam antennas for various bands one after another. In Japan, we had a huge amateur radio boom right after the movie named “Take Me out to the Snow Land” was released in 1987. In the movie, the main characters operated amateur radio as a mean of communication at a ski resort. Many young people in Japan loved the movie, and the number of people who acquired ham radio licenses rapidly increased. Thanks to that, their antennas sold like wildfire! They manufactured antennas all night long. In the morning they supplied antennas to their customers, and soon they received many orders...they were always running overtime! That was the situation when Mr. Toshikatsu Ikegami just entered the company.

“After I entered this company, I got a ham license. I was in charge of selling amateur radio antennas first, then I moved to other departments where I proposed professional radio antennas to the companies with their special needs,” Mr. Ikegami said.

“Wow...I assume that proposing ideas to create custom-made antennas for those companies is quite difficult...”

“Yes, it was difficult. At the beginning, I did not have enough knowledge to understand the customers’ requests or needs, and the conversation often stalled. Therefore, after work from 8 pm till 2 am, I tried my best to study about various kinds of industries. Luckily, I had a lot of people who kindly helped me when I was struggling. Thanks to many people, the Solution Business department is now steadily growing, and we supply our antennas to many kinds of public offices.”

“Please tell me if you have a unique antenna to show.”

“Here is one example. It is sometimes difficult to receive standard radio waves inside of reinforced concrete buildings. For time synchronization of radio-controlled clocks without an Internet connection, we produce a type of antenna that is used to retransmit the radio signals that have been received outside of a building. Those antennas enable time calibration systems to work well, even in reinforced concrete buildings. Another example is a type of antenna that is used to control a gondola for cleaning windows of high-rise buildings.”

“An antenna for cleaning windows!? I didn’t know that COMET antennas are used in such a unique field!”

The best hit was a mobile whip antenna for the 144/440 MHz bands sold in the United States, he said. The antenna is designed to cover wider amateur bands (from 144 to 148 MHz, and from 420 to 450 MHz) than the Japanese ones. Even though it has been a long time since its first release, it is still very popular. Their recent high recommendation is an antenna analyzer called the CAA-500 MarkⅡ. With the analyzer, not only we can measure the antenna SWR and impedance, but also it has a lot of convenient features and functions covering from 1.8 to 500 MHz. 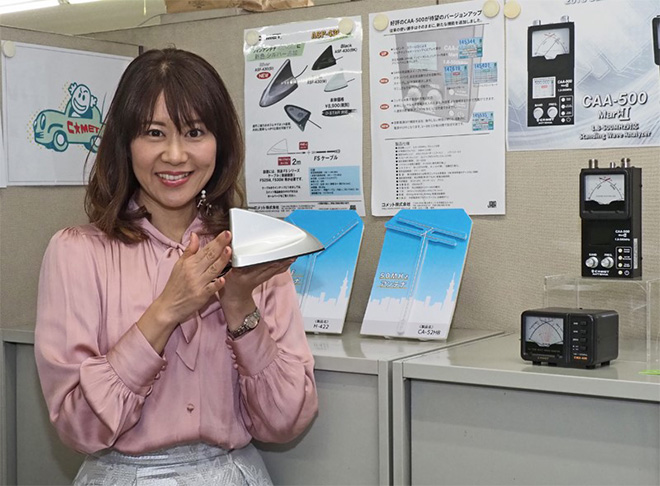 The fin type ASF series are also popular COMET antennas!The small box to the right is the CAA-500 MarkⅡ, and the SWR meter above is the CMX-400 covering from 140 to 525 MHz.

“The BR series antenna analyzers made by a measuring instrument manufacturing company called Kuranishi were popular in the past, but because they went out of business, they became difficult to obtain. We thought we must not let the “Made in Japan” products die out, so we decided to cooperate with Kuranishi. In 2008, we were able to release the COMET AA-170, which became really popular. Ever since then, we keep evolving our antenna analyzers, and the current product, the CAA-500 Mark II, possesses the right expertise,” Mr. Ikegami happily said.

The sample CAA-500 MarkⅢ was exhibited at Tokyo Ham Fair 2018. I can’t wait for its official release! 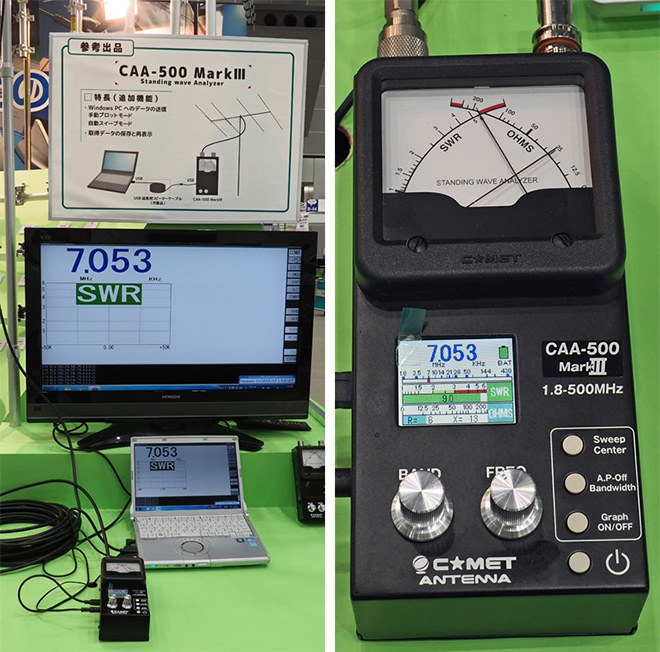 Photos at the COMET booth, Tokyo Ham Fair 2018. The CAA-500 MarkⅢ was exhibited as a sample.A USB connector is built in, and the manual plot mode and the automatic sweep mode are selectable!