Using the recently acquired IC-705 (hereinafter referred to as 705), while operating the RTTY mode at 13.8V DC and 10W of output power inside my car, the 705 housing, especially the rear panel part, became hot. The thermal protector in the 705 automatically reduced the transmitting output power from 10W to 5W. This action prevents the 705 from failing because the final transistor will be damaged due to high temperature, so it is not a malfunction. When this happened, the 705 TEMP meter indicator was in the red zone. However, you can operate it at 5W without a problem, and it seems to be a function that is appreciated by users.

I stopped operating, and the TEMP meter indication went down after a while, so 10W operation was resumed. However, if you continue to operate 10W in RTTY in the same way, you can easily imagine that the same thing will occur.

To operate continuously, I can turn ON an external fan in my car to blow air directly onto the 705’s rear panel. Furthermore, since the lead acid battery installed in the car is used as a 13.8V DC power source for in-vehicle operation, I removed the BP-272 battery pack from the back of the 705 so the wind could blow onto the aluminum die-cast on the back of the 705. As a result, that day the 705 was no longer forced to power down.

However, it is not a smart way to operate by turning ON the external fan every time I operate RTTY or FM, so I decided to make a cooling fan for the 705. As a cooling fan is not listed in the 705 accessories, I bought some components at an electronics store in Nipponbashi in Osaka on my next day off. The main components are a BP-273 alkaline battery case, a 30mm square book fan, and a DC plug/jack. Actually, the BP-273 is not an accessory for the 705 and you should not use it to power the 705 because the DC power applied from the battery case may make the 705 malfunction due to low battery voltage. I used the BP-273 only as the fan case. 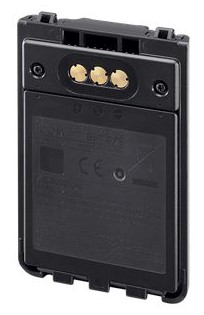 The BP-273 battery case is sold as an accessory for the ID-31 and ID-51x series Icom handheld transceivers. The 30mm square book fan operates on 12V DC. I purchased two types of fans. One has 8 blades and the other one has 5 blades. But I broke the 8 bladed fan during the project construction, so I used the 5 bladed one for this project.

Installing the fan on the BP-273 case

Initially, I thought that it would be better to install a fan as close as possible on the back side of the aluminum die-cast frame of the 705, so I first installed the 8-blade fan in the BP-273. However, the screws that attach the fan to the back cover interfered, and I could not attach the case to the 705.

Next, I installed the 5-bladed fan on the BP-273. This time, I was able to install it smoothly on the 705 without the screws hitting the case. In addition, the back cover has the largest hole that can be cut so that the wind hits a wide area of the aluminum die-cast frame. Of course, it is possible to enlarge the diameter of the hole with a file, but if you enlarge it more, the back cover will be structurally weakened, and it will be damaged when you remove it. So, the size of the hole is as shown in the photo. 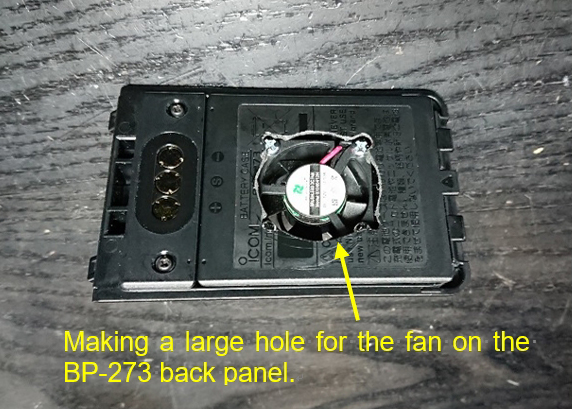 A large hole on the back cover

I could install the cooling fan on the case well, so I installed a DC jack next to the fan to power the fan with an external 13.8V DC source. The same 2.5mm DC jack as the 705 external power input was used for this. In addition, I also made a cable with two 2.5mm plugs and one jack so that one OPC-2421 DC power cable can apply the DC power to both the 705 body and the cooling fan. By the way, the fan sucks the outside wind onto to the aluminum die-cast frame, and the hot air is ejected from 4 holes marked as air ventilation holes in the picture below. 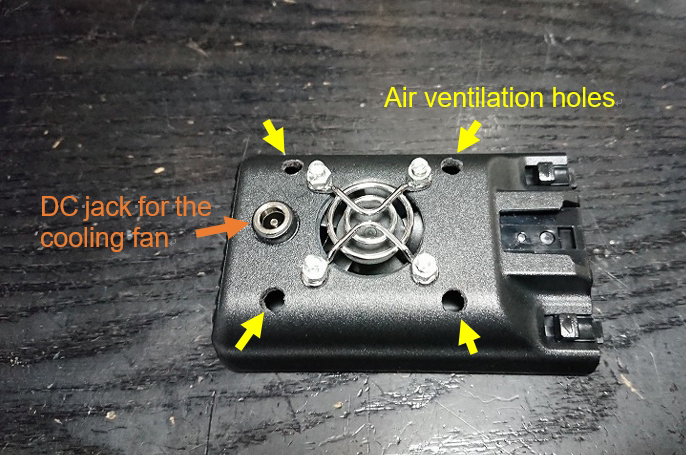 With the DC jack attached and 4 air ventilation holes

With this, the "detachable cooling fan" was complete for the time being, so I immediately conducted a cooling test.

●First test conditions
・Apply external 13.8V DC to both the 705 and fan.
・Continuous 10W RTTY transmission on 7MHz. (The transmit timeout timer is set to OFF).
・A 50Ω dummy load is connected. (SWR is almost 1:1)
・The air conditioner in the test room should be set at 25℃ to keep a standard temperature condition.

The time was measured until the thermal protector of the 705 was activated, and the output power was forcibly powered down to 5W. Here is the result.
・31 minutes and 20 seconds when the BP-272 (standard 705 battery pack) is attached to the back of the 705.
・34 minutes and 30 seconds* when the cooling fan I made is attached instead of the BP-272.

As a result, although a temporary effect of installing a cooling fan was confirmed, the time was only about 10% longer, and there was no significant difference in actual operation. 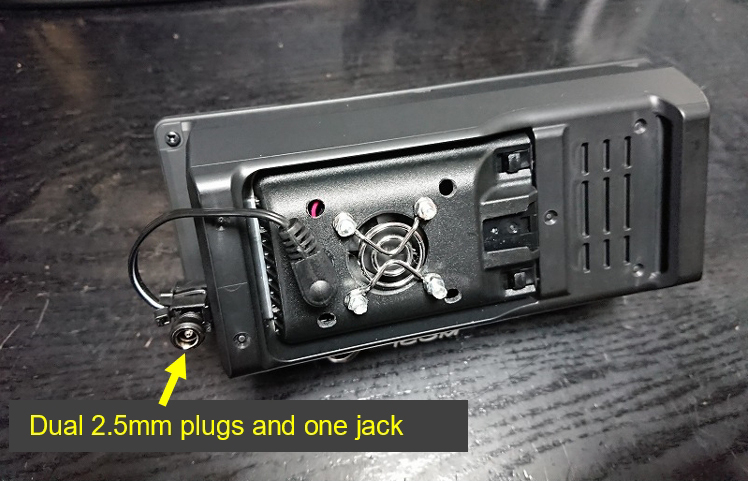 Removable cooling fan that did not produce the expected effect

The previous test did not confirm a sufficient effect as I expected, so I considered the cause.
1. There is not enough air flow to the aluminum die-cast frame.
2. There are air ventilation holes, but the air volume is insufficient with only 4 holes.
3. Before I tested the second measurement, I confirmed that the TEMP meter indication had lowered sufficiently, but I started before it dropped to the same temperature as in the first test. This may be a possibility of the measurement error.

The following measures were taken to improve to the results
1. Attach the cooling fan without the lid of the BP-273 case.
2. Increase the number of ventilation holes to increase air ventilation.
3. The first measurement and the second measurement were carried out on different days so that the case temperature at the start of measurement is the same. 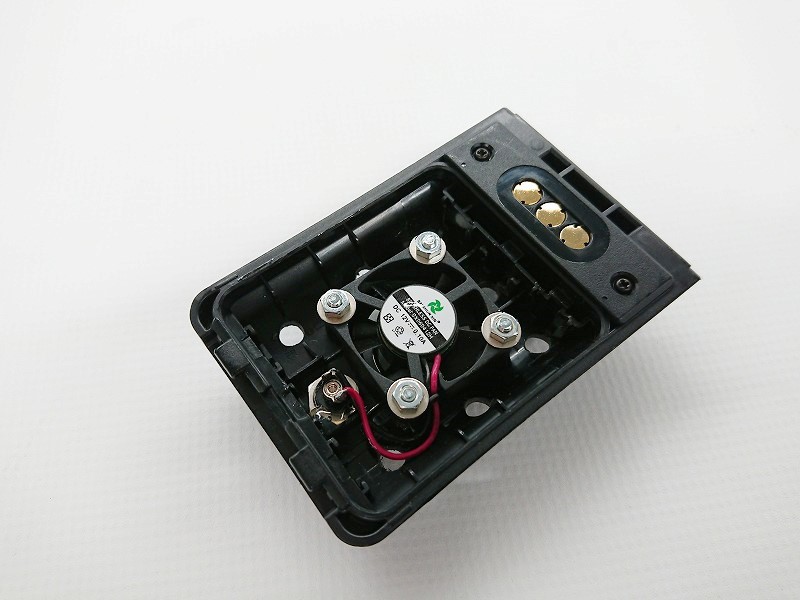 The inner lid was removed, and then the screws attaching the fan were reversed. 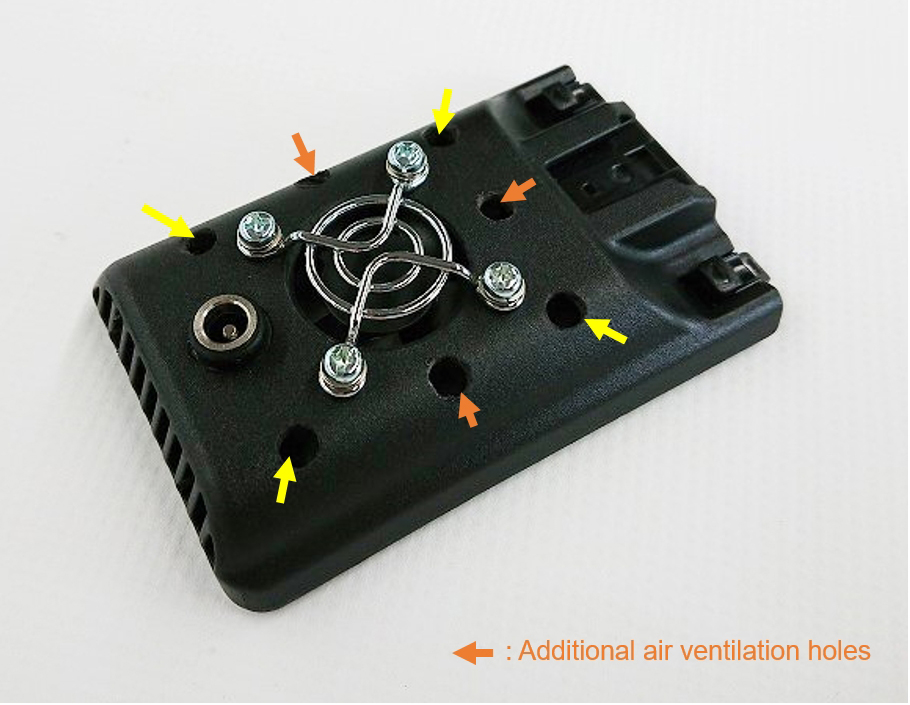 Air ventilation holes on the back were increased from 4 holes to 7. 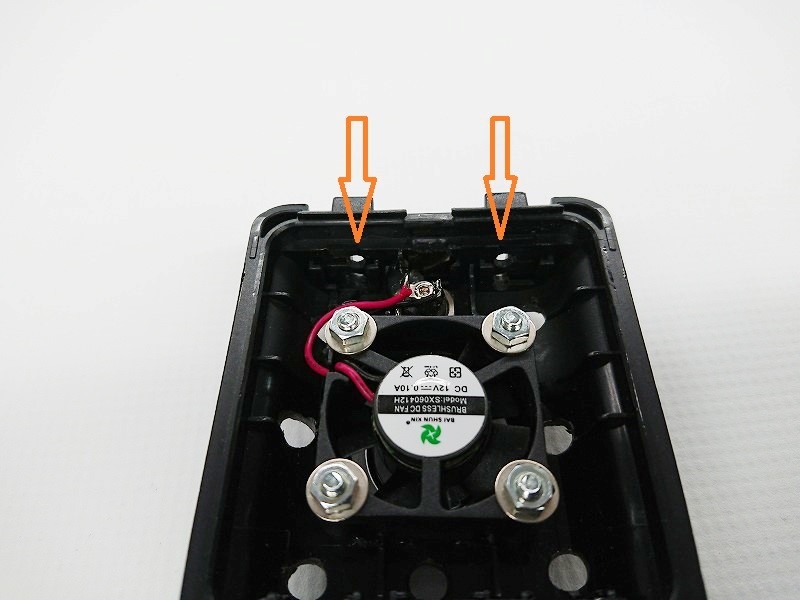 Four small holes were added at the bottom

●Second test conditions
・Applied 13.8V DC to both the 705 and fan.
・Continuous 10W RTTY transmission on 7MHz. (Transmission timeout timer is set to OFF).
・A 50Ω dummy load is connected. (SWR is almost 1:1)
・Air conditioner in a test room should be set at 25℃ to keep the identical temperature condition and the test is done at the other day to sufficiently reduce the 705 TEMP temperature. 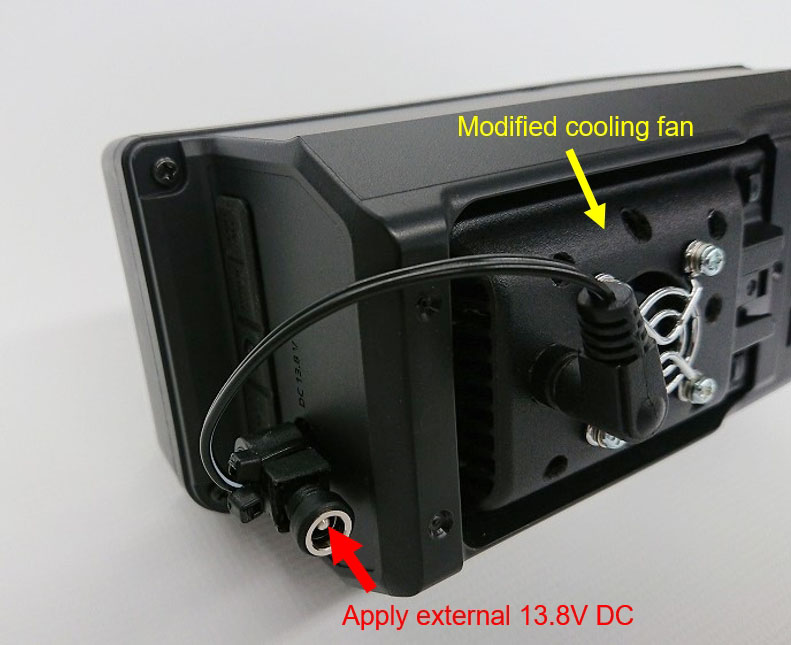 Equipped with both the modified cooling fan and the DC jack.

By installing an improved cooling fan, 10W continuous transmission is possible for about twice the time compared to operating without the fan. Since it takes about 1 hour for the thermal protector to activate when continuously transmitting 10W RTTY on 7MHz, it is unlikely that the thermal protector will activate during operation if the duty cycle ratio is 1 for transmit and 1 for receive.

Another advantage of this fan is that the IC-705 manufacturer's warranty will not be voided because the IC-705 body has not been modified at all. Also, when you want to operate at 5W QRP with the BP-272 instead of normal 10W operation with the external 13.8V DC, you can quickly replace the cooling fan with the BP-272 battery pack. On the other hand, the disadvantages are that the fan uses more electricity, and you hear the sound of the fan blades.

Of course, I think there may be a more efficient cooling method, but I hope this experiment will be helpful for high duty -cycle transmission users.

Just before this article was published, I received a heat-dissipating film called "Cool Stuff" from Oki Electric Cable Co., Ltd., so I immediately conducted an additional test.

Supplementary test 1
A friend of mine gave me a film type heat sink called "Cool Stuff." As shown in the picture below, it comes in a roll shape, and using it is as simple as pasting it on the part you want to radiate heat from. This time, I attached it to the 705’s aluminum die-cast frame, and measured by continuously transmitting 10W RTTY on 7MHz, as I did before. 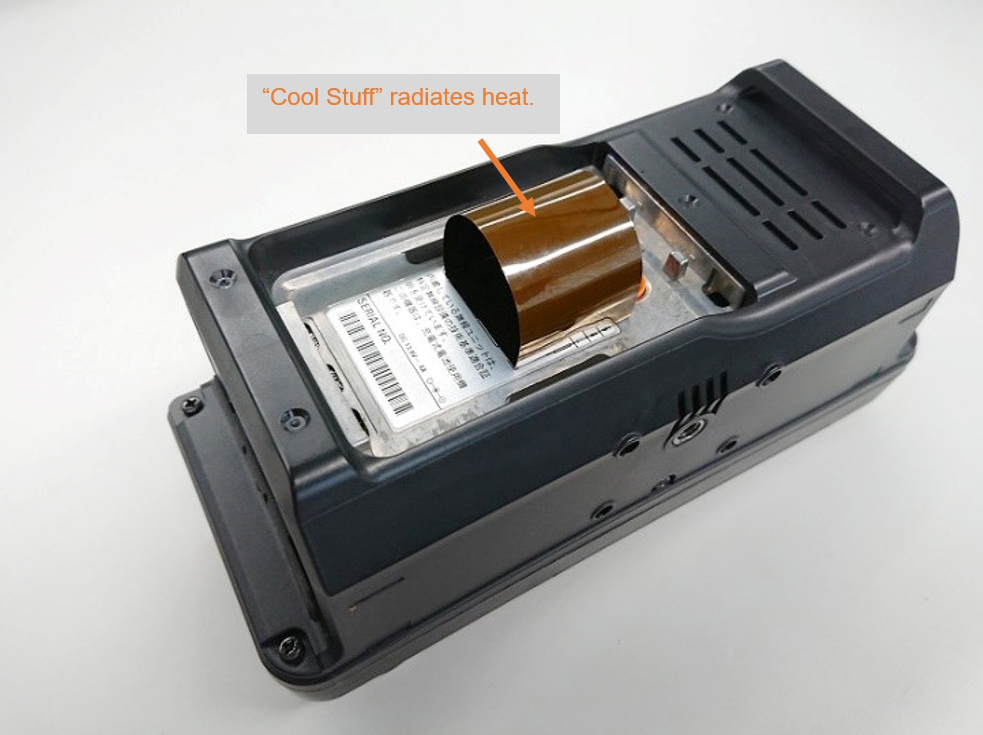 Supplementary test 1 result → 43 minutes 30 seconds
When the Cool Stuff is attached as shown in the picture above, and the 705 outputs 10W RTTY with an external 13.8V DC, the thermal protector activates after continuous transmitting. I observed it took about 13 minutes before the power was automatically reduced from 10W to 5W, compared with the BP-272 attached. The Cool Stuff effect was confirmed. However, if you attach the Cool Stuff as shown above, you will not be able to attach the BP-272, so there is a disadvantage that the 705 will be a dedicated external DC powered transceiver.

Supplementary test 2
The Cool Stuff was attached to the aluminum die-cast frame, as shown in the picture below, and the cooling fan, instead of the BP-272, was installed on the top of it. In this case, the Cool Stuff can also dissipate the heat while blowing air with the fan. 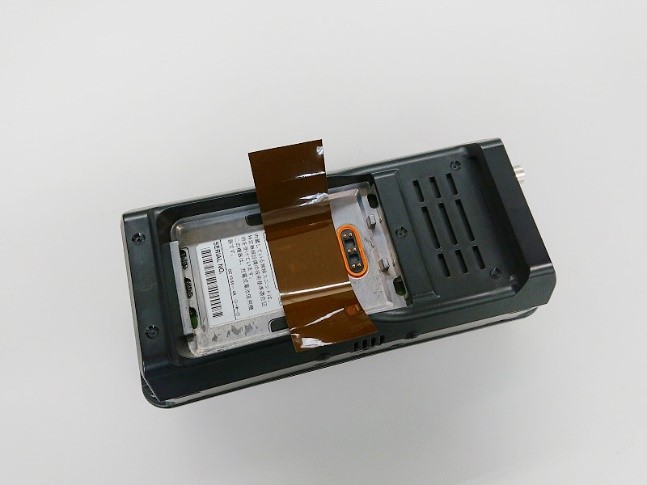 The Cool Stuff is pasted on the die-cast frame 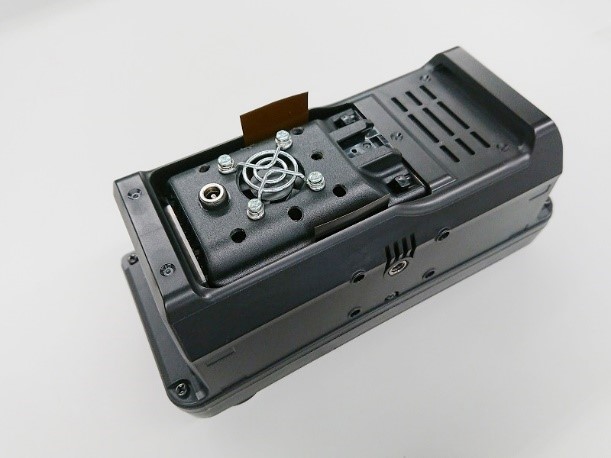 With an improved cooling fan is installed. Both ends of the Cool Stuff are protruding.
(You can expect the heat dissipation effect with this "protrusion")

Supplementary test 2 result → Thermal protector does not work even after 120 minutes
After 2 hours of continuous 10W transmission, the output power did not decrease, and the TEMP meter indication still had a margin of 2 bars. 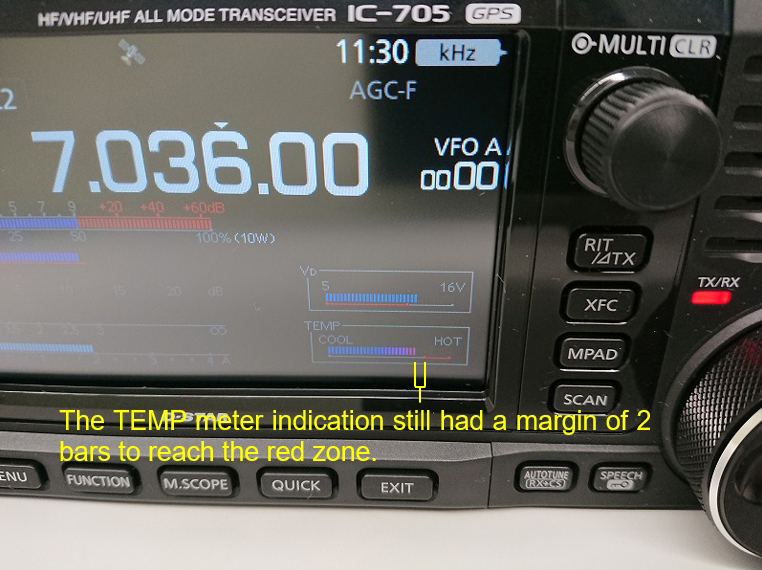 The TEMP meter indication after 2 hours

In this test result, if I cooled the 705 with the Cool Stuff and used the improved cooling fan, it is likely that the thermal protector will not activate during normal operation of transmission 1: reception 1 for RTTY or FM.