This month’s JACOTA article is about operating at Tanabe castle. In 1570 Oda Nobunaga ordered Hosokawa Fujitaka to build this castle. Fujitaka destroyed his own Miyazu Castle and moved to Tanabe Castle while his son Tadaoki fought on the Tokugawa side at The Battle of Sekigahara in AC 1600. Around 15,000 attackers aligned with the Ishida clan surrounded Tanabe Castle, which had only 500 defenders commanded by Fujitaka. After 50 days of fighting, Fujitaka surrendered the castle after the emperor acted as an intermediary to help save him. Kyogoku Takatomo became the new lord of the castle, and then Makino Chikashige became lord in 1668. Makino built the current stone walls and gate. The Makino clan continued to rule until the Meiji Period, when many castles were abandoned or destroyed. 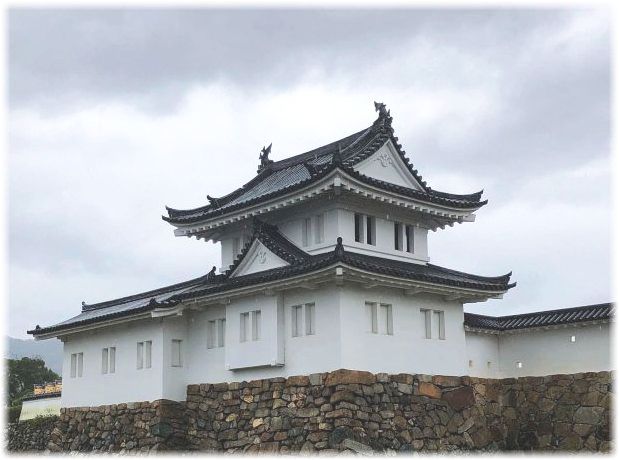 Tanabe castle is located in Maizuru city, Kyoto prefecture. I operated there at the end of February. I originally visited Tanabe castle in November of 2020, to see the castle and ask for permission to operate. The castle has very easy access with a large parking lot about 100 meters to the north. The park around the castle is open all the time, and the museum opens at 9:00 am. There is a wide open bailey (yard) where you can toss a baseball, kick a soccer ball, or race RC vehicles.

The main gate at Tanabe castle is massive. Thick beams and heavy hardware make it a secure opening into the castle. In a large room in the yagura above the gate, is an interesting museum. 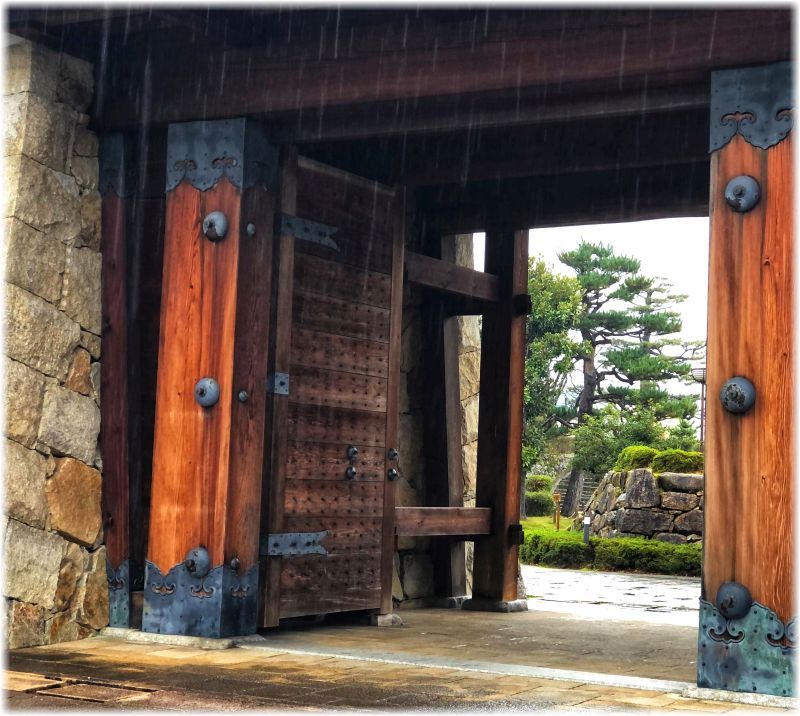 There are exihibits and information about the castle in the northern yagura. The castle buildings are in very nice condition and well maintained. 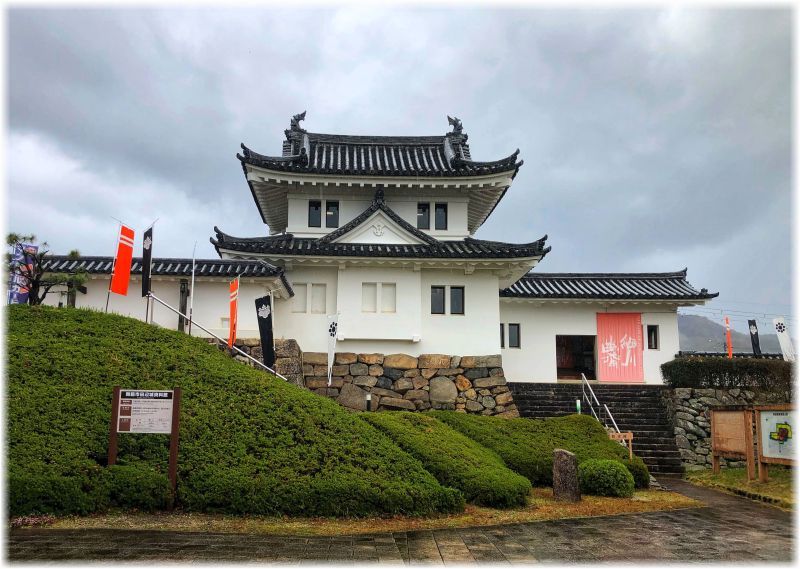 Yagura inside the castle grounds

To the east of the yagura is a very nice garden, using part of the original moat. Lots of trees and shrubs are planted, plants make it a peaceful place to visit. 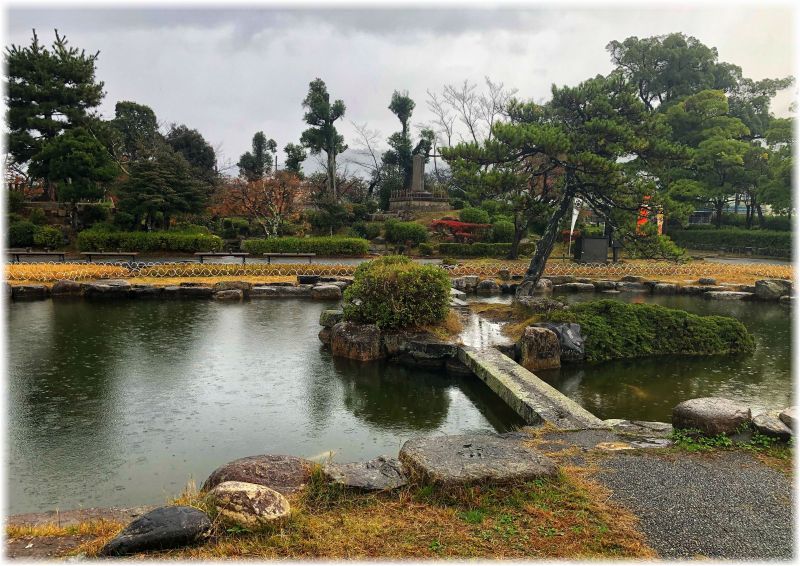 Part of the original moat and the garden

The 6 meter band is popular in Japan, so for this portable operation I chose to operate HF using the AL-705 Magnetic Loop Antenna (MLA) and 6 meters using a 3 element Yagi. The 6 meter Yagi antenna can be built with the components that come with the Deluxe Buddipole® system, the optional 6 meter Yagi kit, and other accessory components. The parts and assembly are detailed later in this article. I chose a location not far from the castle building and gate, on a small rise on the main bailey. All of my equipment was brought in using my cart. The forecast was for sunshine, so I brought my umbrella and later clamped it to the tripod. I am glad I brought it, as the sun later got bright, and it got a little warm. I set up the Yagi as the main antenna and the loop antenna on a camera tripod as a sub antenna. I also attached the IC-705 to a light plastic tripod and placed it on the folding camp table. 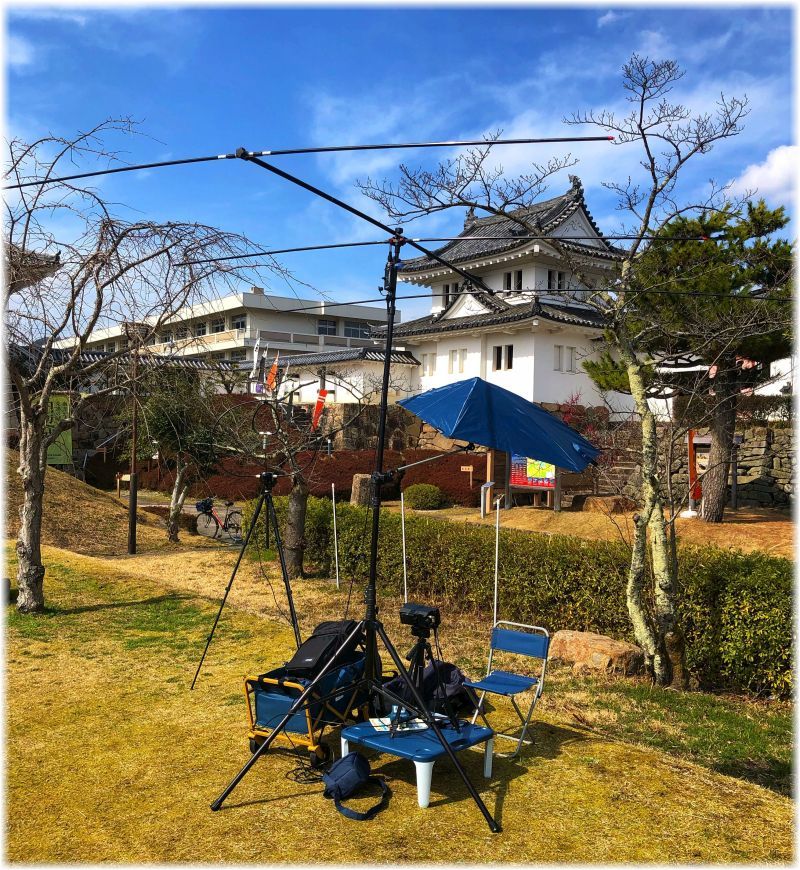 Operating location on the castle grounds

I brought the AL-705 loop antenna for HF operation on the 40 meter band. Loop antennas have a very narrow bandwidth and tuning them to the frequency you want to operate on is necessary each time you change frequencies. The narrow bandwidth makes reception very clear and reduces the noise. The challenge is tuning for low SWR to transmit. The antenna is very easy to assemble and is easy to carry for portable operations like JACOTA. I alternated between operating on 6 meter SSB and HF, mainly on 40 meters, SSB. 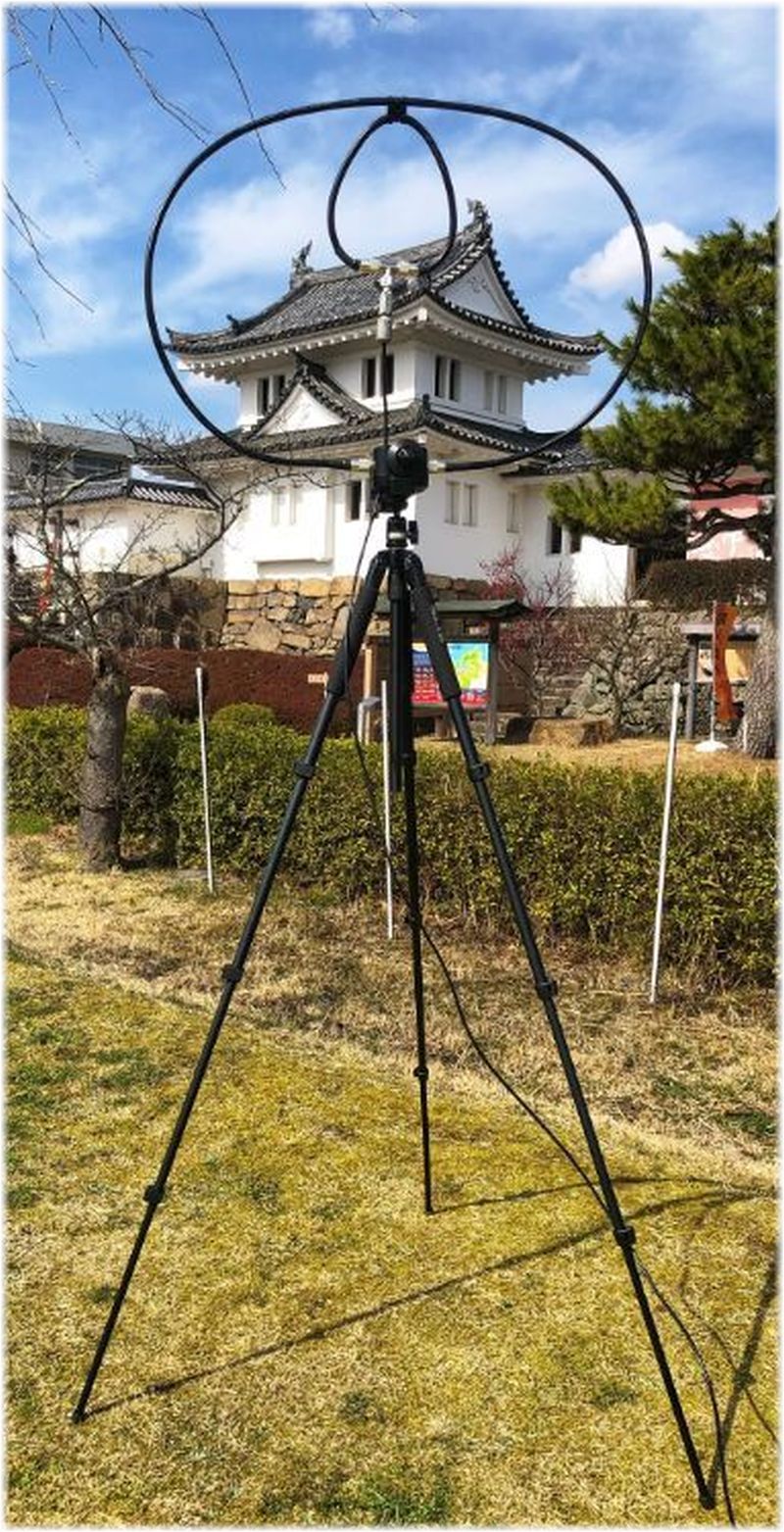 As I mentioned, tuning the loop is critical and sensitive. Just a slight adjustment of the knob moves the resonate frequency of the antenna. I felt the knob was too small for slight changes, so I glued a large rubber washer onto the plastic knob. 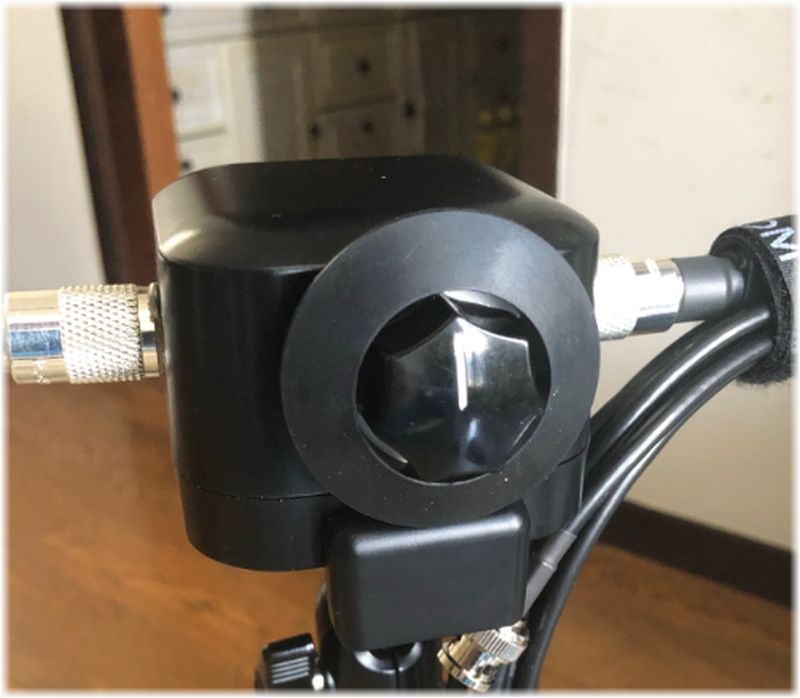 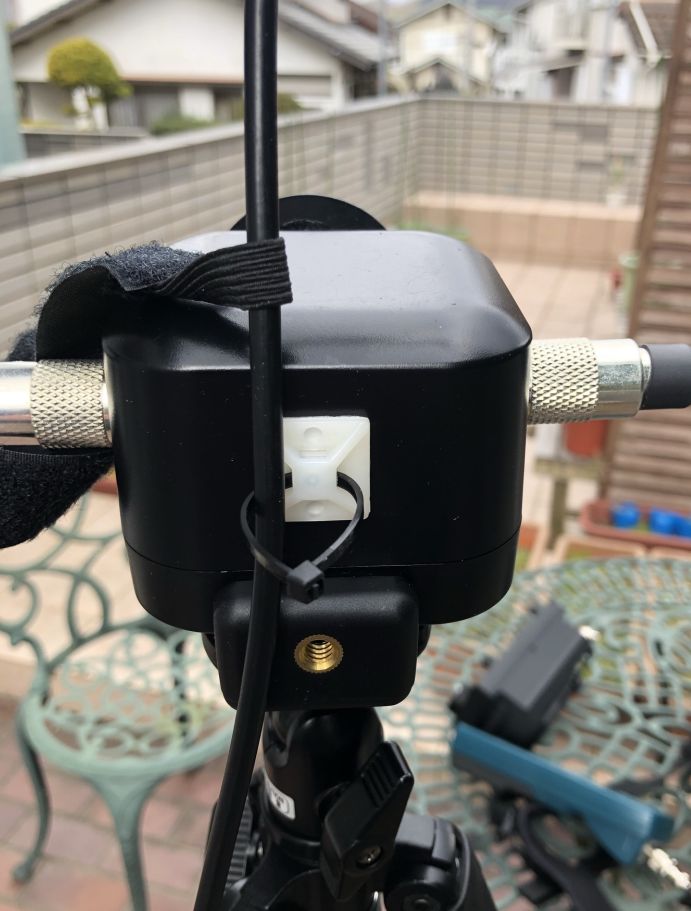 Back of the box and phone clamp

Addition to the loops

I use tie wraps to keep the loops together and to keep the plastic bracket from getting lost. 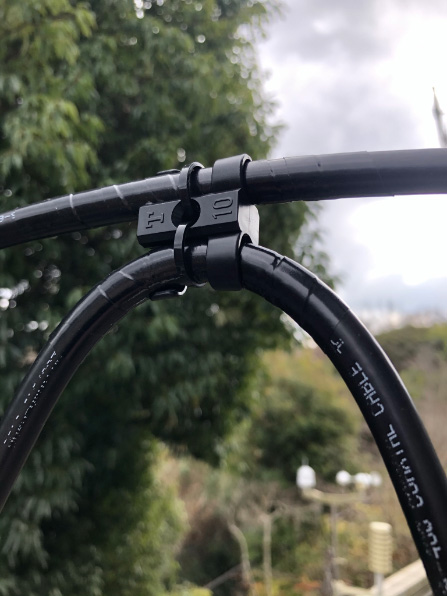 It is very convenient when you bring a lot of stuff to the site... I knew the access to the bailey was very easy, so I brought more than I would normally bring. Everything fits well into the hauling cart. It rolls smoothly and is easy to pull. 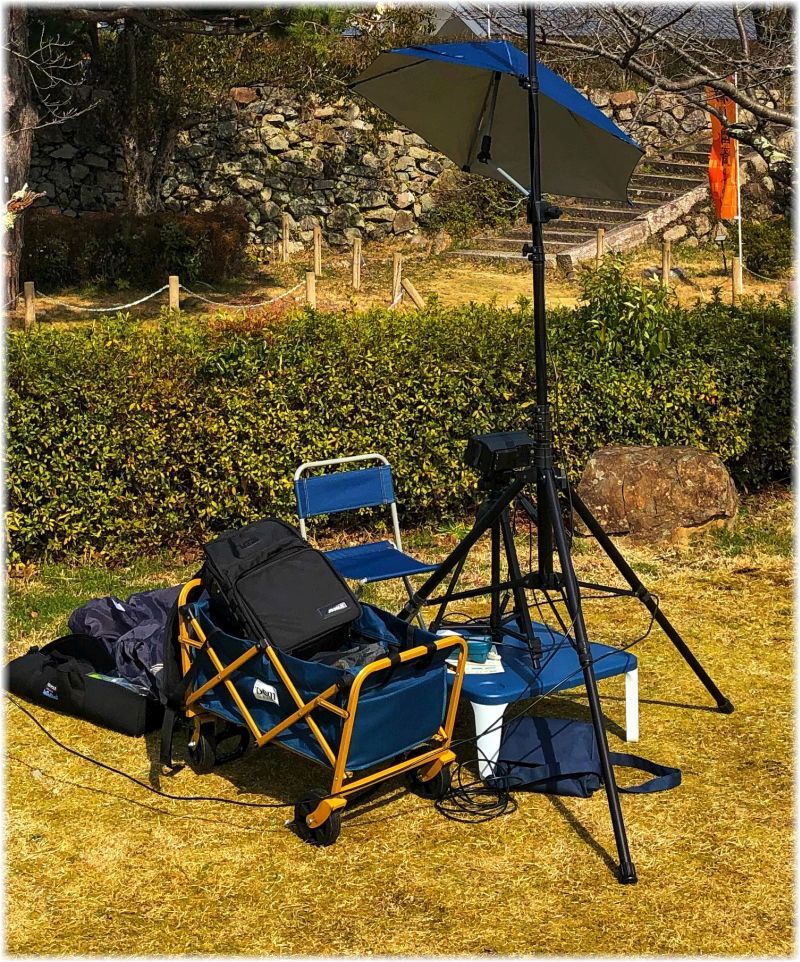 Gear and the hauling cart.

Until now, I have operated almost exclusively on 40 meters using a vertical antenna. I brought the AL-705 loop antenna and used it for HF. The 40 meter band is my favorite, but I also like operating on 6 meters. 6 meters is also a popular band here in Japan, and so I decided to assembly a 3 element, 6-meter Yagi antenna using the parts in my Buddipole® system. A 3 element Yagi for 6 meters is not that big, and the Buddipole® antenna does not need loading coils.

Besides the tripod and mast, the following Buddipole® components are neeeded to assemble a 3 element 6-meter Yagi antenna: 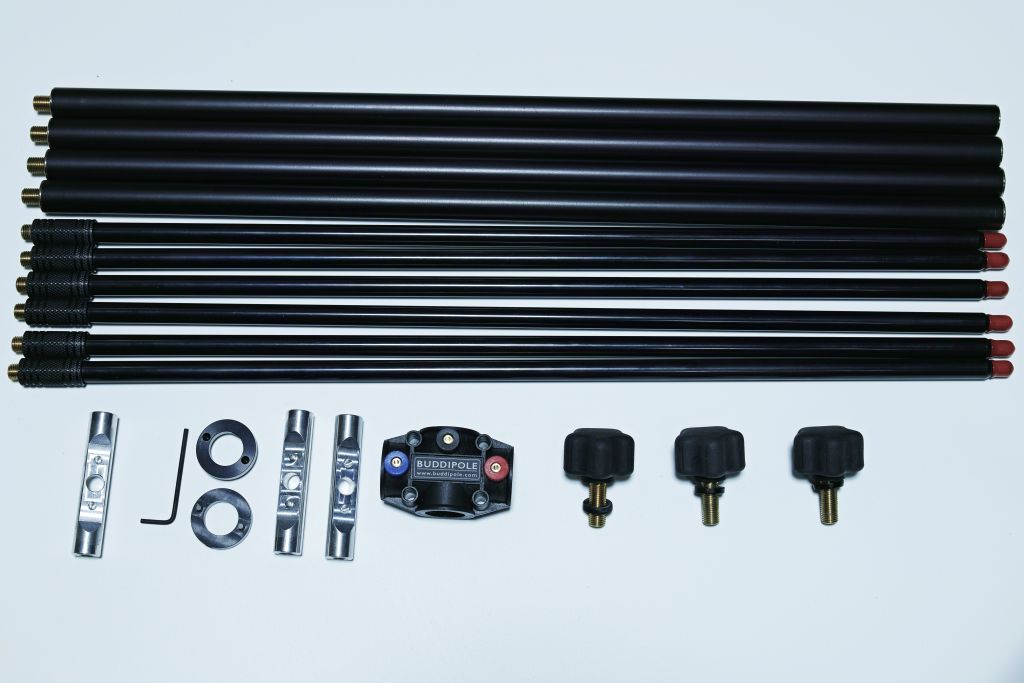 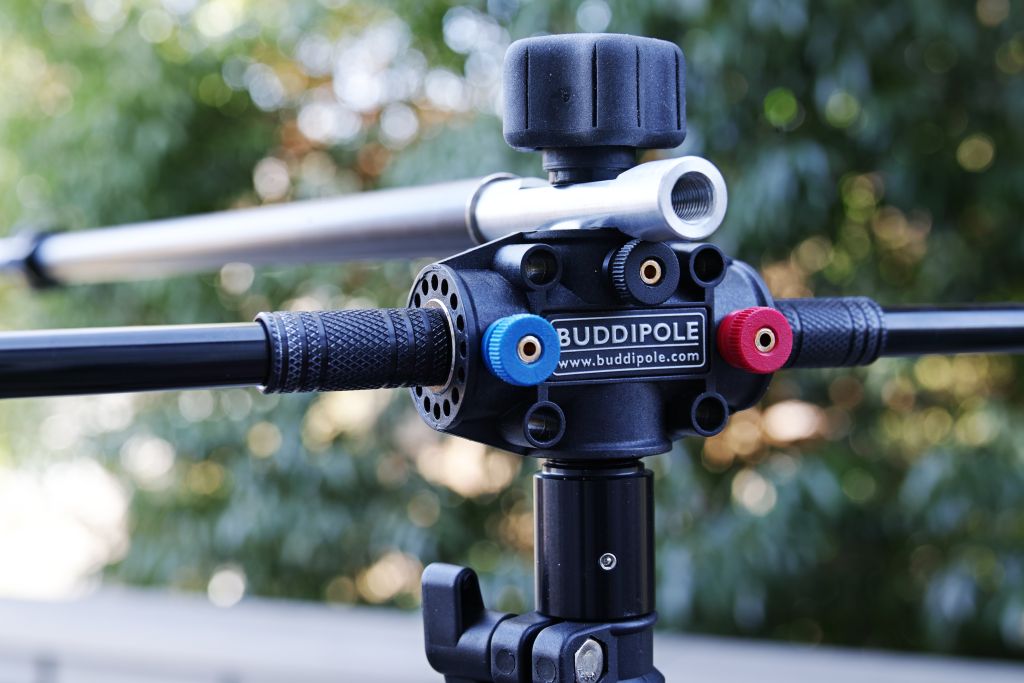 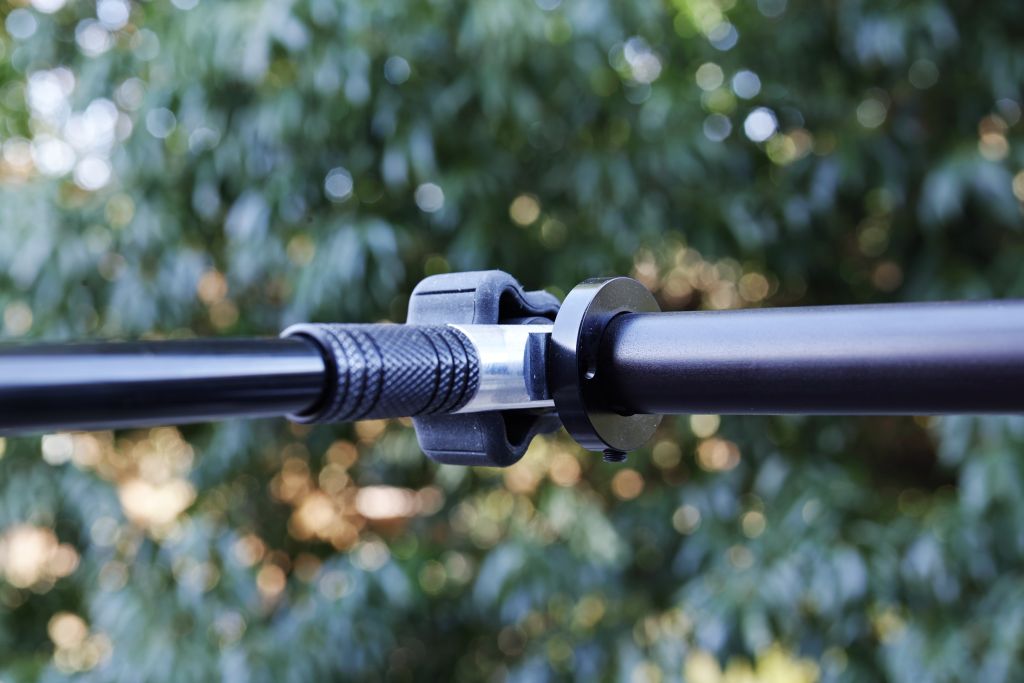 The same assembly is done to make the director element on the other end of the VersaTee®. The whips on the VersaTee® are the radiating element. 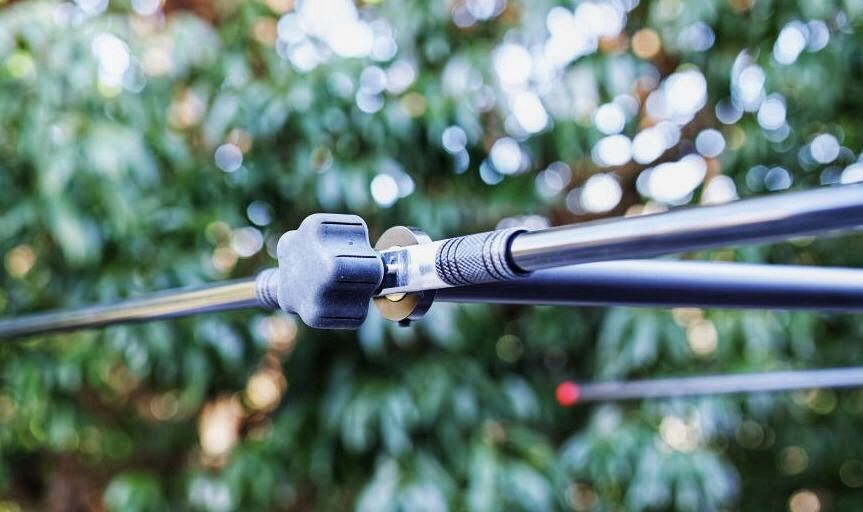 Once the radiator, director and reflector elements are assembled, and the length of the whips are set to the proper length, connect the feed cable to the VersaTee® and check the SWR. Make any necessary small length adjustments, point the Yagi in the desired direction, and you are ready to begin operating. 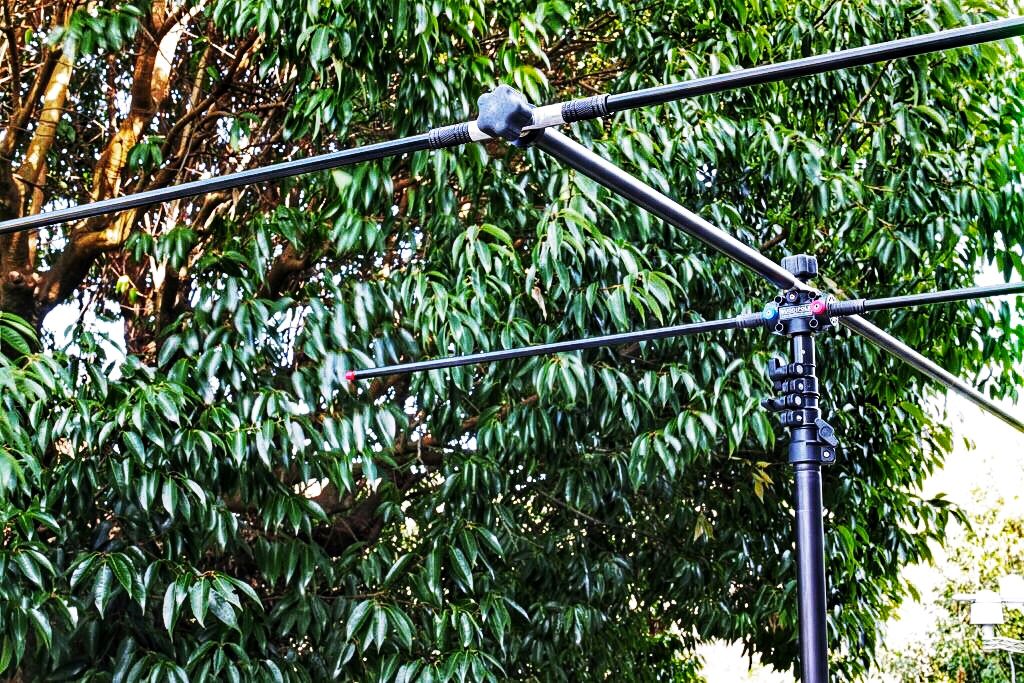 I arrived at the parking lot near the castle around 9:00am. I packed all the equipment into the cart and pulled it to the castle, about 100 meters away. Entering the castle about 9:30am I looked for a good spot to set up the station and began assembling the antennas.

The SWR of the Yagi was low and flat across the SSB portion of the 6 meter band, which is where I mainly worked. The tuning of the loop antenna is critical, so I mainly looked for a clear frequency on the IC-705 spectrum scope, then tuned the loop antenna to that frequency and concentrated on calling CQ there. I changed frequency only when the interference got too bad to hear other station replies.

Operating from a historical site is always fun and operating from Tanabe castle was both fun and rewarding. Several visitors approached me and asked, “what are you doing?” Some knew about Ham radio, but others did not, and all were very curious about the equipment and listening to me operate. Morning was more productive than the afternoon, and as it got warmer, I had to take off my jacket and put up the umbrella. I told the castle staff that I would be at my operating spot until about 2:00pm, and so around 1:30 I stopped and began taken down the station and loading up the cart. At exactly 2:00pm I said goodbye to the castle and made my way back to the parking lot and loaded the equipment into my car to begin the 2.5 hour trip back home. I got home a bit tired, but excited about planning the next JACOTA project trip to another castle.

I am going to Akashi castle soon to ask for permission to operate there. I will also take some pictures of the castle. 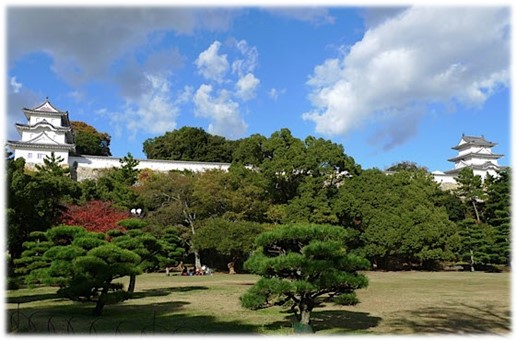 I visited Izushi castle earlier this year, just after it had snowed. I really like Izushi castle and look forward to operating there too. 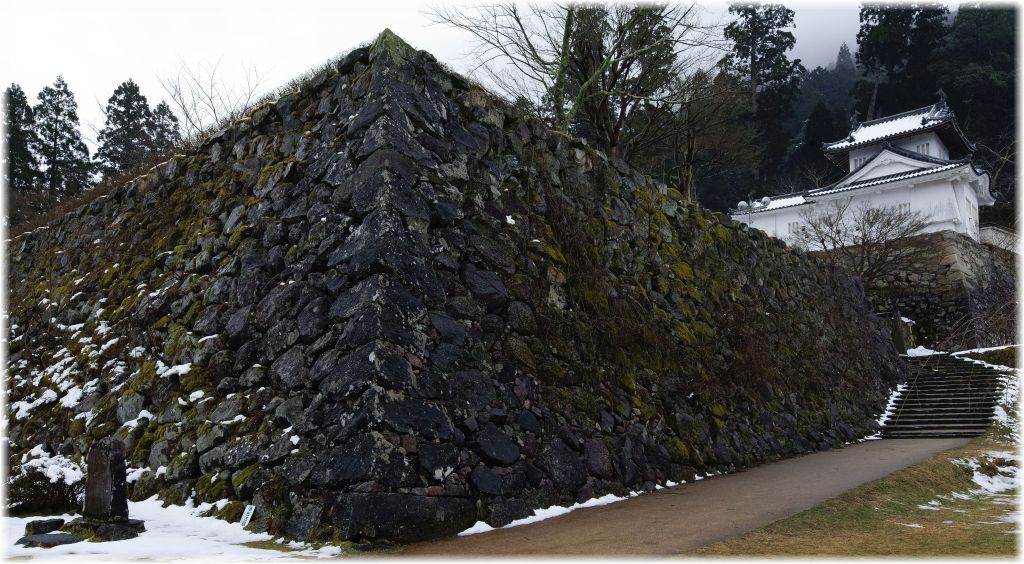 I have a couple of other castles I am also interested in visiting. Where I operate from next will depend on getting permission, the weather and the COVID-19 situation. Check out jcastle.info for information on Akashi and Izushi castles, or any other castle you are interested in learning more about. Take care everyone and visit a historical site when you can.