I am back on the road again! The State of Emergency (SOE) was finally lifted, permitting me to travel to a castle about 45 minutes from my home. I thought I might have to take a break in visiting castles for the JACOTA project, but my friend Steve in Okinawa visited one of his local castle ruins and wrote an article about his operation in the October issue of FB News. Thanks Steve! With the SOE lifted, and the number of new covid19 cases declining, it looks like I will be able to continue visiting castles and writing JACOTA articles. With that said, on to Sasayama Jo (castle).

Sasayama castle is located north of Kobe city, between Osaka Bay and the Sea of Japan, in Hyogo prefecture. To the north of Sasayama is Fukuchiyama city, with Fukuchiyama castle and further north, and a bit east, is Maizuru city, with Tanabe castle.

Sasayama is a castle town with a history of more than 400 years. The town has been an essential point of transport from Kyoto going back to ancient times. A strong influence of Kyoto is reflected in its townscape and culture. The area is registered as one of the most important townscapes in Japan, and it is also certified as one of the 100 beautiful Japanese historical towns. You can walk throughout the town and visit shops, cafes, and preserved samurai homes, as well as the castle itself.

Tokugawa Ieyasu ordered construction to begin in 1608. Ikeda Terumasa was in charge of the construction, according to Tōdō’s design, and the castle was completed in six months. About 20 Daimyo (regional lords) were recruited to “contribute” to the construction. The castle was so well designed that Tokugawa ordered the Tenshu (castle keep) to not be built, fearing that it might later be used as a base against him.

The Aoyama clan ruled Sasayama Castle for 123 years during the Edo period, beginning in 1748 and continued until 1871. Except for the Oshoin Grand Hall, almost all of the buildings in the castle were destroyed after the Meiji Restoration. However, the hall was destroyed during a firebombing air raid in 1944. It was reconstructed in 2000. 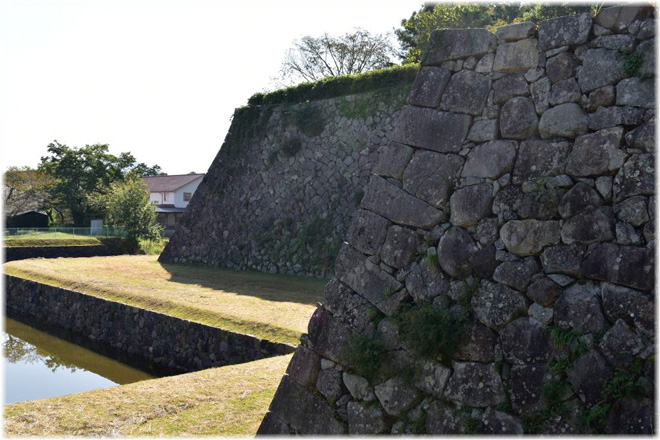 The Ishigaki (stone walls) surrounded by the moat. The walls are very well maintained and are massive, giving very good protection from any attack. 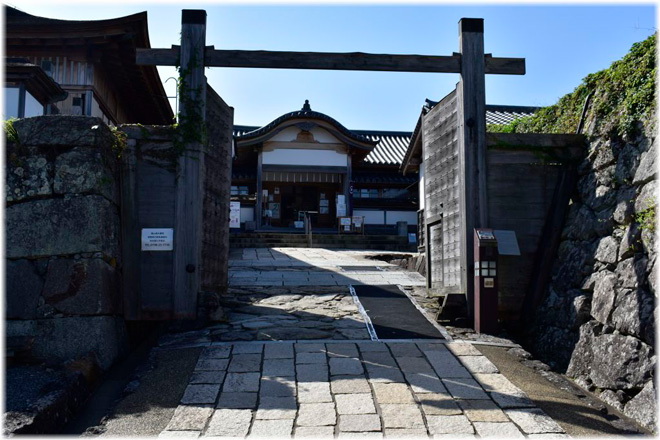 The front gate of the castle with the main hall in the background. The stone walkway is fairly steep, and a pad is placed over the rough gate stones, making it easier for wheelchairs to travel. 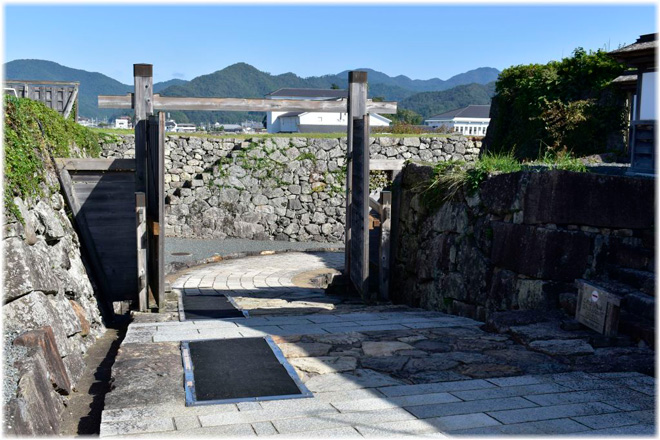 Looking back through the gate from the main hall. The stone walkway curves to the right and then to the left, with stone walls that allowed defenders to fire down on any attackers, who had to maneuver through the curved walkway. 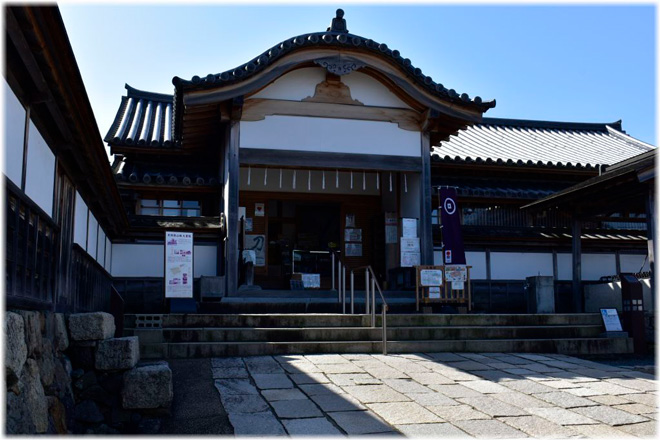 The main hall of the castle is now a very nice museum with lots of artifacts used in the castle. 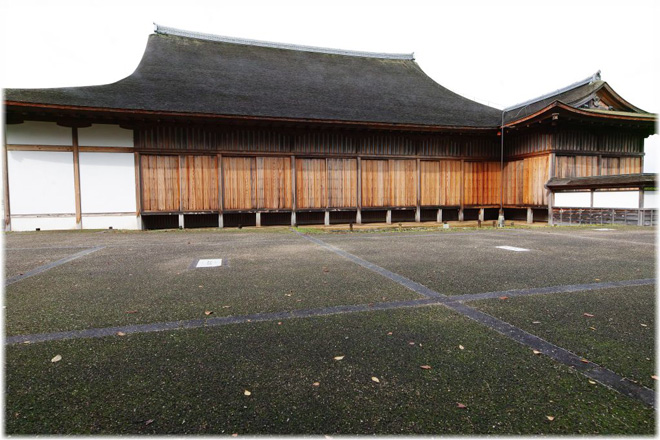 The back of the main hall, with the Ni maru bailey where housing and storage structures used to stand. 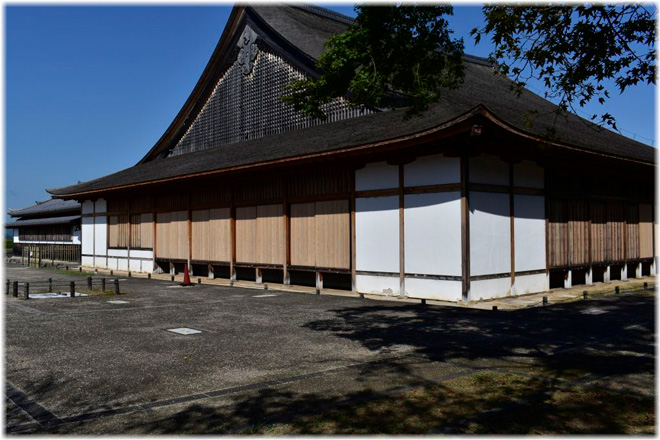 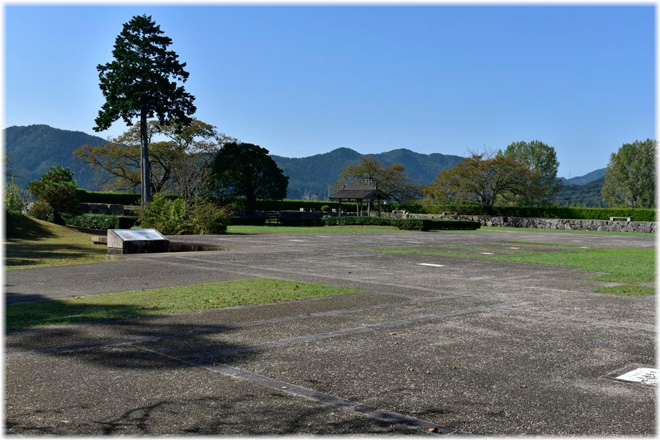 The Ni maru bailey where there were originally units for storage, soldier’s housing, and kitchen and eating facilities. 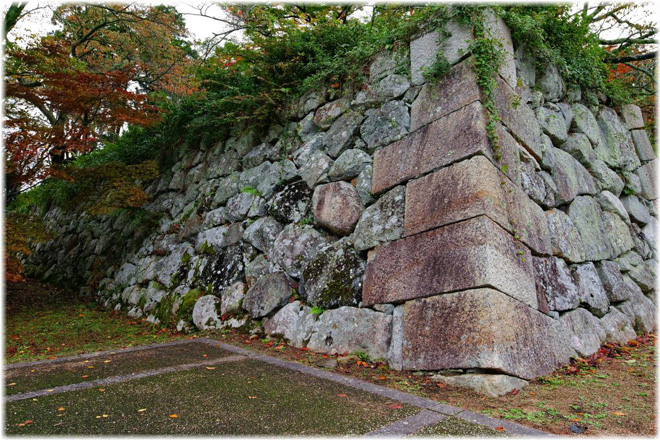 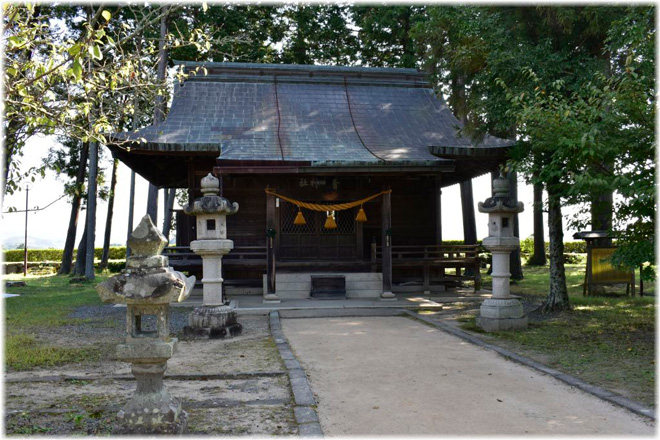 Aoyama Jinja shrine, located on the Hon maru grounds, near the Tenshudai 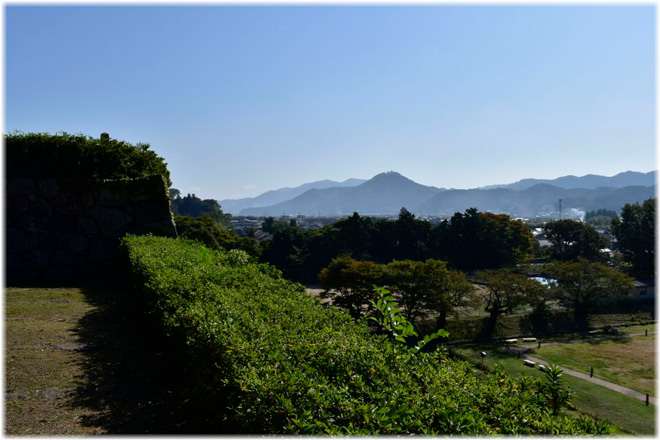 Looking south from the Hon maru bailey, next to the Tenshudai. In this pic, the skies were clear and the weather was nice. Later it clouded up, as you can see in the picture below while I was operating. 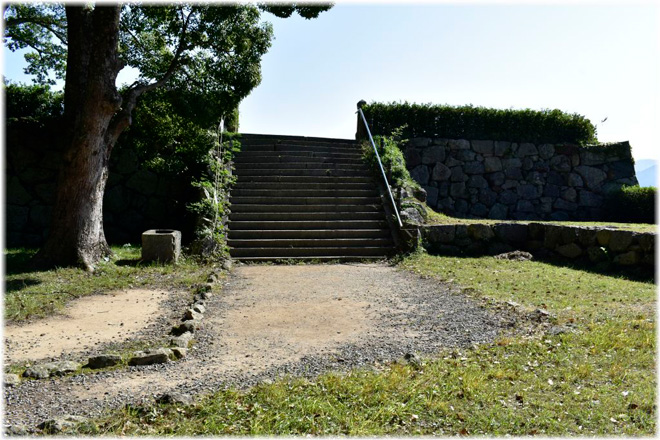 Tehshudai (keep foundation) The foundation was made, but the Tenshu was never built, as mentioned above. 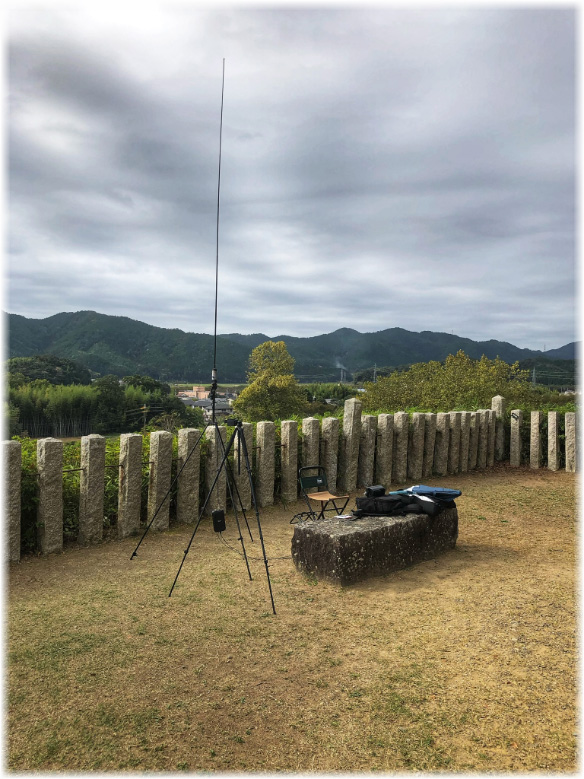 My operating area on the Tenshudai (keep foundation)
I carried my antenna system, photo gear, and other needed accessories on my luggage/chair carrier 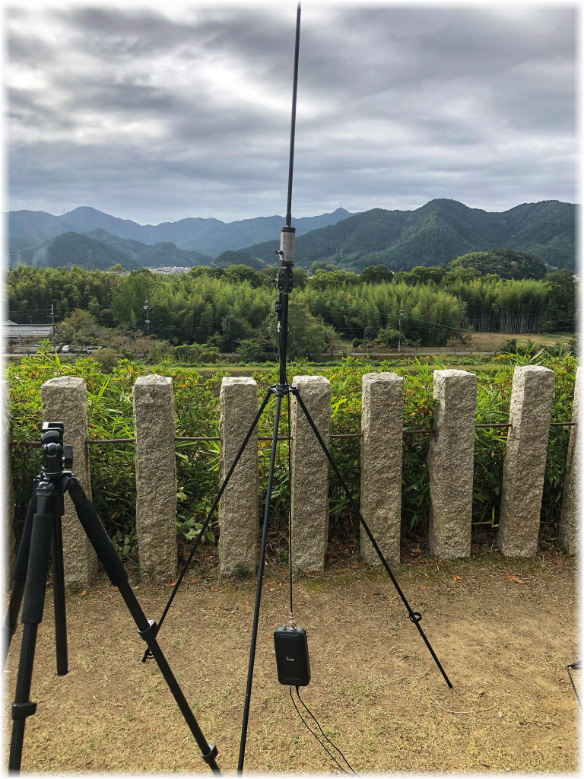 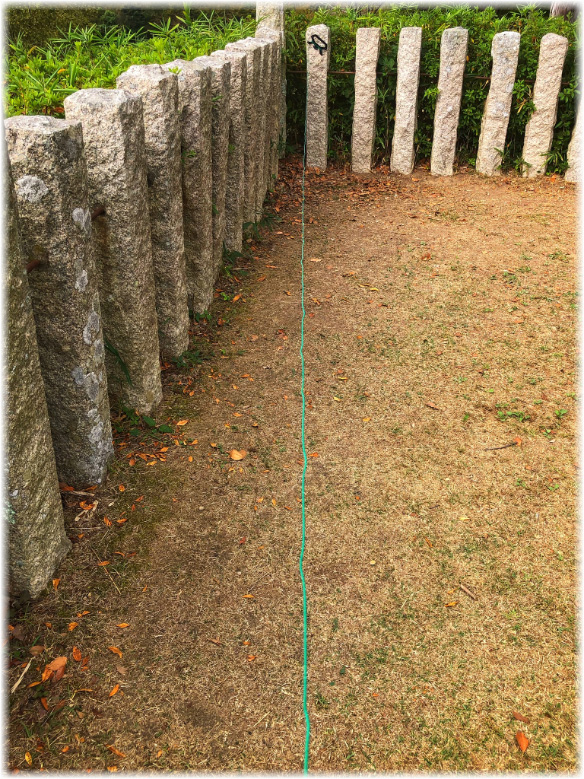 The counterpoise is elevated about 2 feet above the ground and adjusted after the proper coil tap is set. 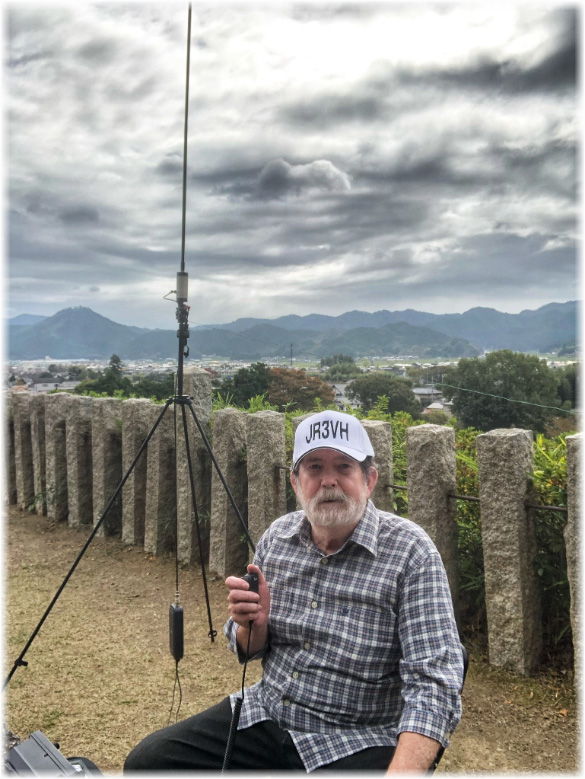 Operating!
The sky was cloudy when I took this pic, but later the clouds disappeared, the sun came, out and it was very warm.

This time I took the new Buddistick Pro™ tripod and Versahub™ base with me as it is very light and easy to carry. I wrote an article about the tripod in the June 2021 issue of FB News here. I assembled the shock-corded legs, attached them to the Versahub™ base. Next I added an 11 inch antenna arm, a regular VersaTee™ base, the black loading coil, and finally added the long extended whip element. I attached the clip onto the coil at the proper 40 meter position according to a chart I had, and connected the coax cable to the clip and to my antenna analizer. I then attached the counterpoise wire to the VersaTee™ and stretched it out and wrapped it around one of the stone posts at the site. Using the analyzer I tuned the counterpoise wire for a nice 1.5 SWR accross the 7.150 – 7.170MHz portion of the band. I removed the analyzer and connect the coax to the IC-705, and using the built-in SWR meter, confirmed the SWR was flat after tuning with the AH-705.

The 40 meter band was full of signals from stations in many areas except...area 3. Stations in area 2, 4 and 6 were especially strong. I heard no stations from area 3, which is where I was located. I found a clear frequency around 7.163 and called CQ using SSB many times, but got no replies. I moved to frequencies where there were strong stations, most of them were just ragchewing. I waited for a chance to make a quick “Break” to see if my signal was strong enough to reach them. Unfortunately when one station finished talking and released their mic PTT button, the next station would immediately push their mic PTT and say “Ryokai...” (understood) and begin talking. There was no chance to get my signal heard.

There was a nice station in area 2 that was just finishing his contact with a 4 area station, so I waited until they said their final words and gave the 2 area station a quick call. The 2 area station heard me, but didn’t get my callsign, so he said “QRZ...was someone calling me?” Again, unfortunately, another station that was stronger than me called the 2 station while I was also calling, and overpowerd my signal, so the 2 area station replied to the other call.

I send a message to a friend of mine in Osaka and asked if he would be able to make contact with me, and sent him a clear frequency to listen on. When I received his reply, I called him several times, but he replied by message that he did not hear any signal. Sasayama is surrounded by mountains, even though in the distance, but my signal probably went right over the 3 area, which is why he could not hear me, and why I had not heard any 3 area stations all the time I was operating.

It was a bit of a frustrating morning, but I learned some valuable things... Be prepared to operate on other frequencies, probably higher like 20, or 15 meters. Also, I realized that because I am operating QRP (5 watts) I must relearn and become profecient at CW.... CW on low power is very effective. But all in all, it was still a fun day, and I enjoyed operating at Sasayama castle. I will visit there again and take my CW key with me the next time, after I am profecient at CW.

My next JACOTA trip will be to visit Sumoto castle on the island of Awaji, in the Inland Sea. The castle overlooks all of Kobe, Osaka, Wakayama and other areas, so getting out and making contacts should be a lot easier. I might even try some VHF SSB operation. 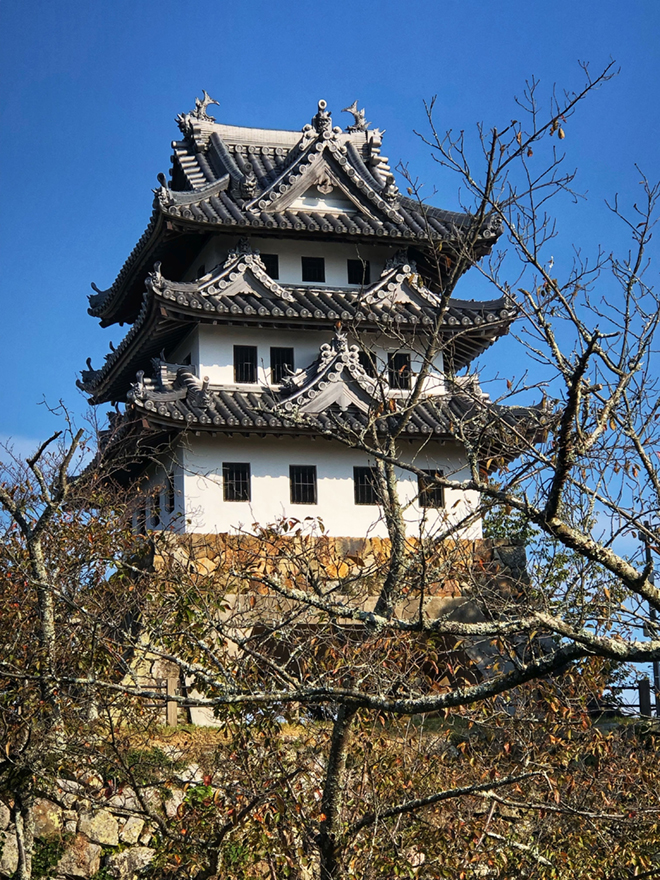