We have received reports that we are seeing signs of sun spot cycle 25, but it still has been difficult to hear overseas stations on SSB or CW. However, DX communications are actively performed using FT8. This time, an article of interest was introduced in an amateur radio magazine in Spain, so the FB NEWS editorial section will post the translation with permission. 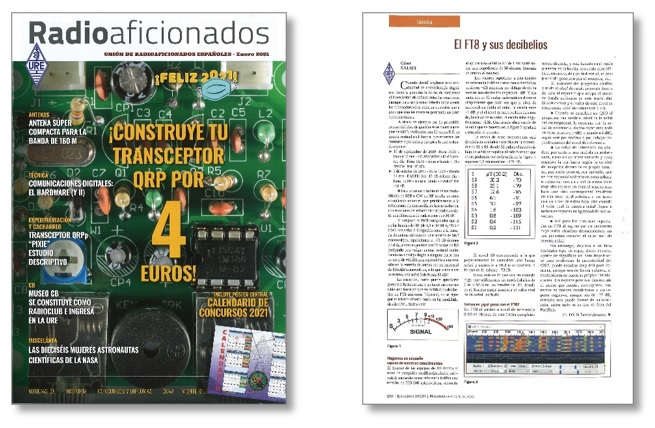 When I decided to explore this mode of digital communication, I was struck by the way the exchange of signal reports between stations (although to be precise, I should say “between computers”). Looking at the signal reports, I feel that something is different from the signal report exchanged by QSOs so far.

As an example, I extracted these four QSO examples from my logbook, made with 50 W output into a multiband vertical antenna and the signal reports at that time are shown below.

■ For a regular user of the SSB or CW modes in HF, it is rather complicated to understand that at practically the same time of day, in the same band, with stations from the same district, there could be a difference of no less than 20 dB.

The situation, as we can see, would seem quite strange and somewhat incomprehensible if it were not for the fact that decibels in FT8 are not governed by the same criteria as in the CW or SSB modes in HF.

Let’s quickly review what we know.

If the S meter of the HF device is shown in dBm, and a voltage of 0.223 V is applied to the antenna connector with an impedance of 50 Ω, an RF signal of 1 mW is generated. This is defined as 0 dBm.

Values above this 0 dB reference voltage are treated as positive decibels +dB, while those below this voltage are treated as negative decibels -dB. And without getting into mathematical formulas, we will simply say that every time the microvolt level doubles in value, the scale rises +6 dB, and if the microvolt level falls by half of its value, the scale goes up negatively -6 dB. Just looking at the table shown in Figure 2 will help to understand this process.

The scale of these instruments is divided into S units (see Figure 1) numbered from S1 to S9. S1 indicates the lowest level of signal perceptible to the human ear which, represents 0.2 µV, or -121 dBm. Refer to the table in Figure 2. 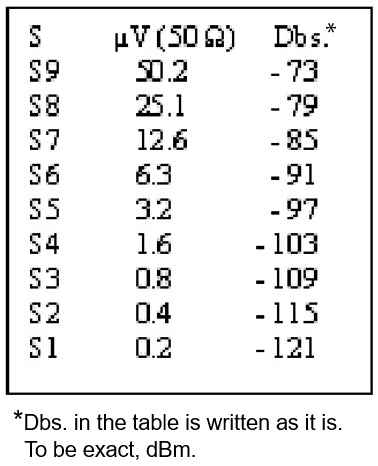 The S9 level corresponds to that what is popularly considered a good signal and is equivalent to 50.2 µV, or -73 dBm.

So, this is what happens when I say that we use the CW or SSB modes in the HF bands, where it is the S meter that shows the real value of the received signal.

In FT8, the 0 dB reference standard or level is obtained in a completely different way, and is based on the noise present in the band, be it atmospheric, cosmic, industrial noise, or the noise generated by the receiver, and so on.

The program software analyzes and measures the noise level present within the entire spectrum occupied by the bandwidth used in this mode (2,500 Hz) and the value of this level is taken as a 0 dB reference level.

■ When a QSO is established, the program measures the level of the correspondent’s signal, then compares it with the reference signal, resulting in a positive (+ dB) or negative (- dB) value, depending on whether it is above or below the reference level.

■ The reference signal therefore does not reflect a standardized measurement. It has a variable character, and each station configures it according to the quality of reception within its own environment. For example, a station located in an urban or industrial area with a very high level of local noise may report a much lower signal strength than another station in a nearby rural area, and therefore with a lower noise level, even when the real value of our signal reaches both receivers in equal microvolts.

■ Therefore, when the signal processed in FT8 are governed by a parameter whose absolute value is unknown, they do not allow us to know the real value of our signal.

However, leaving aside any kind of rigor, this report, apart from being an important data to prove the authenticity of the QSO, can be very useful to know, even relatively, the performance of our own facilities.