One year ago, the IC-705 was released by Icom. I think that there were some amateurs here who packed the 705 in a bag and operated mobile while still paying close attention to the COVIC situation. Meanwhile, I was wondering how the 705 was being used overseas. Ian Lockyer/2E0IAJ interviewed UK amateur radio operator Mark Bumstead/M0IAX and said, "An article entitled Review of the IC-705" was posted on the net. FB News obtained the consent of Mark and the reporter to publish the interview in this web magazine.

Since its launch in 2020, the IC-705 has been a sought after piece of equipment for any amateur radio operator looking for a good portable radio for outside operation. One of the first customers to purchase the IC-705 in the UK was Mark M0IAX who, since his purchase, has been making full use of his rig. 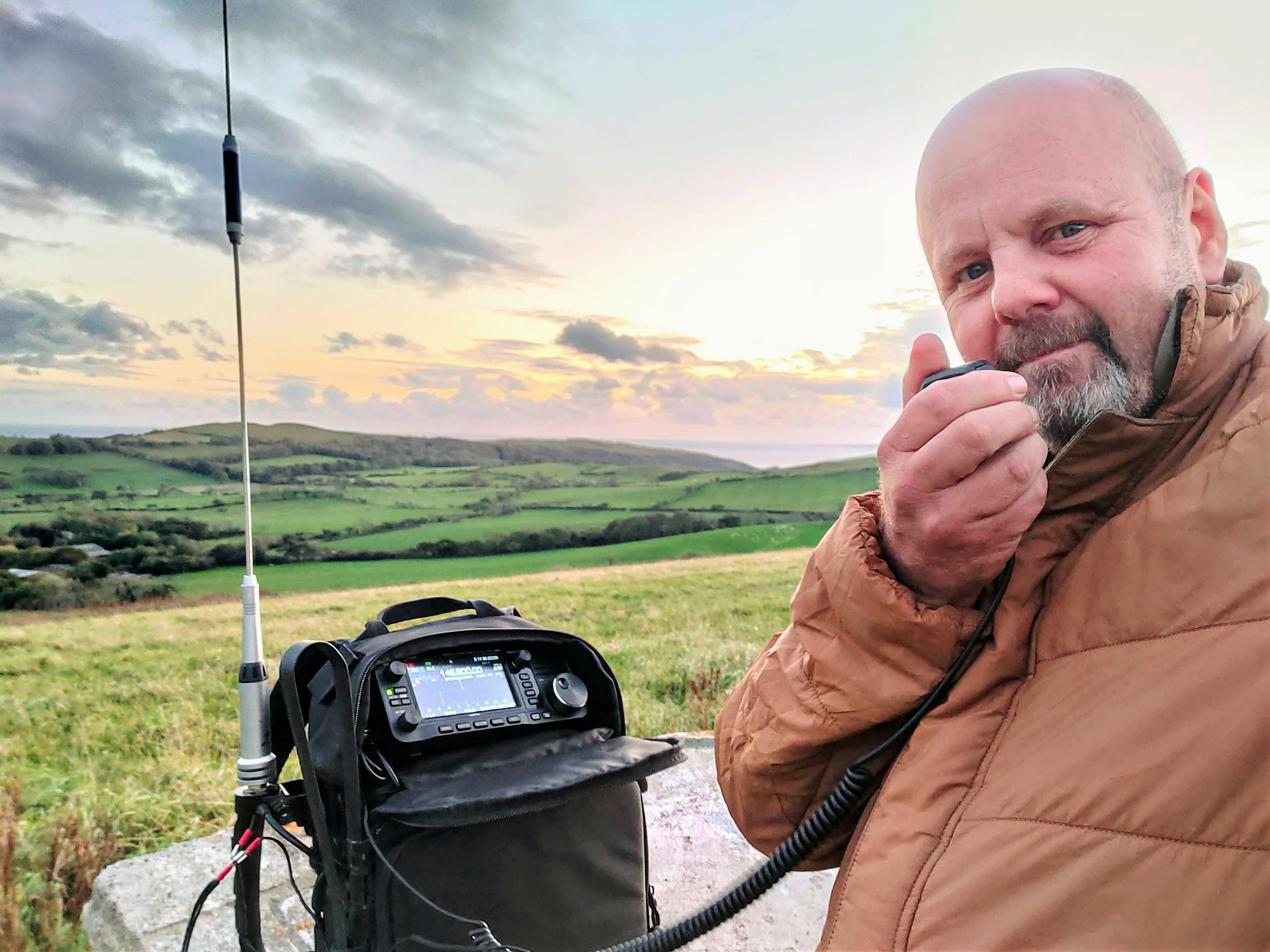 Mark is a Senior Software Developer working in the Telecommunications Industry. Mark has always had an interest in radios. It was not until 2015 that he found a local radio club running radio courses that he took the time to get his license. He passed his foundation and intermediate licenses in May 2015 and Advanced in May 2016. He also holds a Maritime VHF and GMDSS Long Range certificate.

Computers have been a big part of his life since he was a boy, so he loves combining his interest in computers with his interest in radios using digital modes. The modes he uses most are JS8Call and Winlink email, especially outdoors. 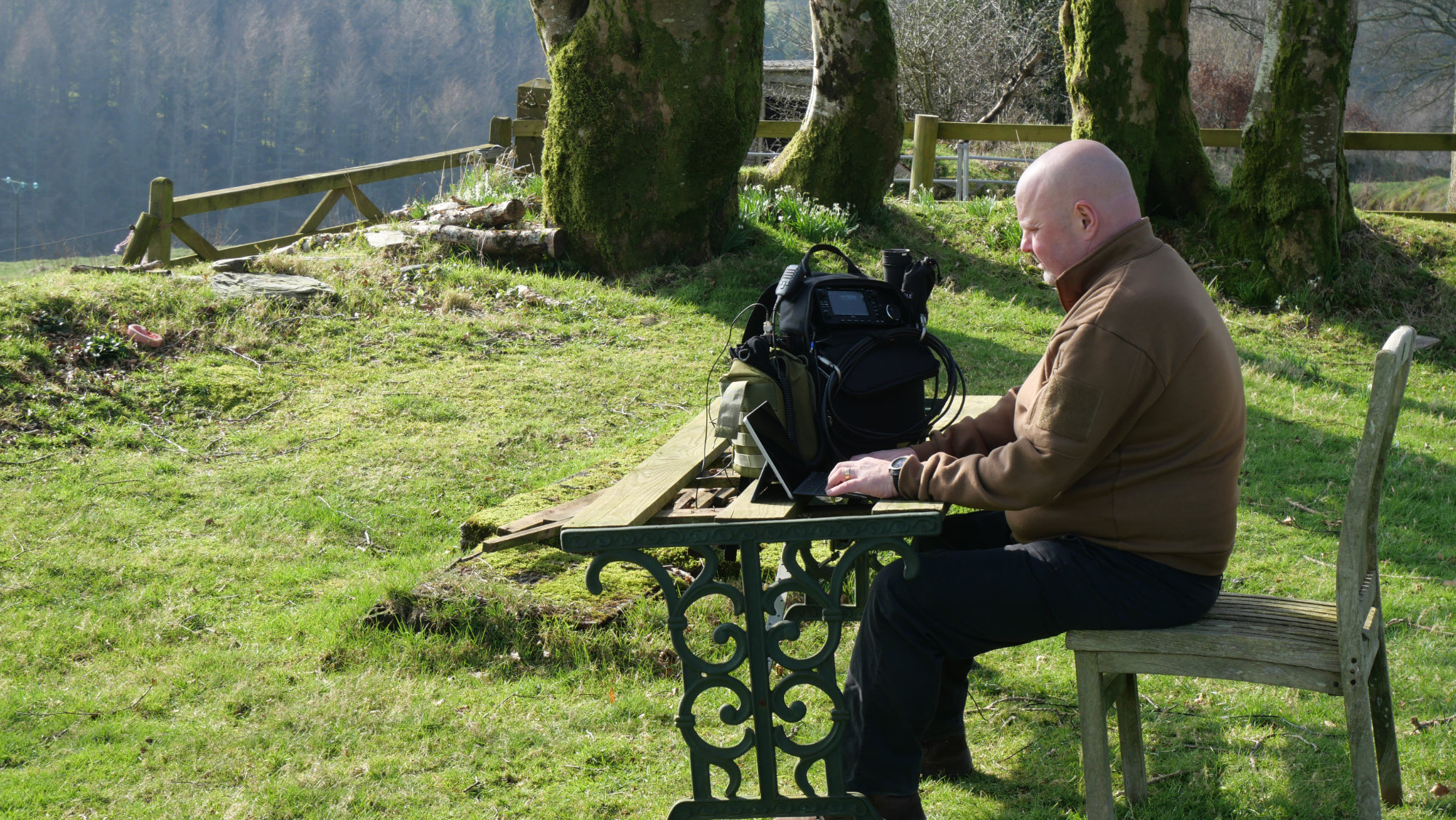 Mark likes to operate in the digital mode with the IC-705 outdoors.

The amateur radio hobby has given Mark much pleasure. He said, 'It's the ability to get outside and set up my radio anywhere I can, send and receive messages using equipment that I set up and communicate with other operators all over the world. I have written some software that I use to augment software such as JS8Call and its great to hear from operators using that, for example, to guarantee that they can share their location or send an email or text message to loved ones (over APRS.fi) when operating many miles from any infrastructure and where they would otherwise have no way of contacting them. I find that there is a constant need to learn new things in the hobby which I enjoy as well as passing that newly acquired knowledge on to others. '

He added, 'Putting together portable radio and computing solutions including packing them into the smallest bag has been of great interest. I have several options available now, but really enjoy packing everything into my LC-192 backpack and walking to a remote location to set up my digital field station – something that the “IC-705” is perfect for.'

Asked what he thought when he first saw details about the IC-705, Mark said, '"This is the radio I am looking for!" I already owned the magnificent “IC-7300” which I enjoyed using for a few years and the great “IC-7100” which I used mobile and portable. So, I had high hopes that the IC-705 would bring portable amateur radio right up to date with the inclusion of some great technologies allowing easier and wireless connectivity.'

He added, ‘The IC-705 combines all the great features of my two favorite radios into one ultra-portable solution and adds more useful options. Since I got the IC-705, I have not used any of my other radios other than a handheld occasionally.'

Despite COVID and lockdowns, Mark has used his radio a lot and had blogged about it. He said, 'The IC-705 is not only a great portable radio it's perfect for those of us with limited space in the shack, so I've been using it as my main radio since I got it. It was released in England the week after we moved into our caravan after selling our boat, perfect timing!’

‘I have been putting together my portable solution ready for when lockdowns are eased. So, I also purchased the “LC-192” backpack, and I can carry everything I need, including antenna systems covering all the bands available on the IC-705, a 12 volt solar-charged battery and a tablet PC for digital modes. I can pick up the bag and throw it in the back of the car or carry it on my back when I go out for a walk.’

Mark packs everything into his LC-192.

‘We recently moved into a house where I can't put up permanent antennas and getting a feeder line through the 2 feet thick granite walls may be an issue. Having the IC-705 in the LC-192 backpack means I can grab the bag and set up a HF station in the garden in just a few minutes.'

There are so many great features. First and foremost, it packs so much into such a portable radio. It has a great multi-function touch display and a sensitive receiver, which makes it a pleasure to use both in the shack and in the field. Its Wi-Fi capabilities mean I don't need any wires to connect it to my computers. It is one of the features I have been looking for in a radio since I started out in the hobby.'

Mark likes to operate the IC-705 with his PC in the shack and in the field.

I have operated more frequently than before as I can take it with me wherever I go and set up quickly and easily. Since we have moved to Exmoor, I plan to try some SOTA activations using my IC-705 – something I have never attempted before. I will let you know how I get on once the lockdown is ended.'

‘The IC-705 is a feature-packed HF/VHF/UHF radio perfect for portable digital operation; I do not go anywhere without mine.’

Mark has an Amateur radio blog which you visit at https://m0iax.com. He posts regularly and has just started a series of "how to set up" guides for using the IC-705 with computers from high-end laptops to the Raspberry Pi.

On social media, he is most active on Instagram at http://instagram.com/mark_m0iax.

You can find his link to his YouTube channel at https://m0iax.com/findme.