Ham radio development has shown a tendency of slowing down after the year 2000. One major reason is that intelligent technology (IT) has taken over our center of attention, brings convenience to our lives, and almost everyone owns a smart phone. Recently, further advanced high speed 5G technology easily allows immediate communications cross over ocean. Attractive visual pictures, and videos with high quality soundtracks, have satisfied the majority’s entertainment desires, and being a convenient communication device. The smart phone has almost completely replaced traditional telephones, which one of major reasons that limits popularizing ham radio. This is the common issue that needs alternative solutions for global ham radio communication system development.

Most of ham radio operators enjoy operating as a hobby, so the operators only enjoy ham radio and get involved the related activities in their spare time. In Taiwan, the Chinese Taipei Amateur Radio League (CTARL) has been the only organization that dedicates all it can to win over global operating legal positions and organizes activities for ham radio enthusiasts to have a platform to show off. The limitation of resources is also one of the obstacles for development. CTARL has never given up, and has planned various ways to popularize ham radio, since education seems to be the best and only way to spread technology and science knowledge. 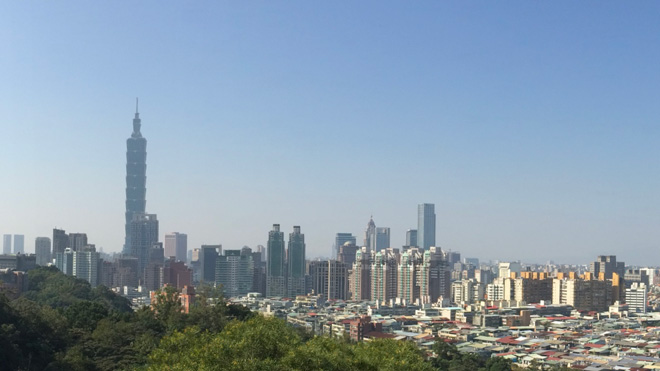 A view of Taipei city (photo by JI1GYO)

CTARL periodically puts on events, and QSO contests have taken places at least twice a month in major cities. Besides that, many fun and sociable events have been taking places over the years to motivate the young generations.

Young students made Taiwan proud
CTARL and National Taipei University of Technology (Taipei Tech) supported a local elementary/junior high school in Yilan prefecture of Taiwan to apply to the American ARRL, AMSAT and NASA for a chance for the young students to directly communicate with astronauts. Although the paperwork took a year of time to receive permission, finally in the afternoon of 11 January 2010, ISS international space station passed about 400km above Taiwan. Astronaut “Jeff” in the ISS participated in a Q and A session with the students. This event was a milestone of aerospace science in Taiwan, since it was the first time for the young students to explore a new experience with satellite communications. They expressed high curiosity and interest in radio communication and desire to absorb scientific knowledge. 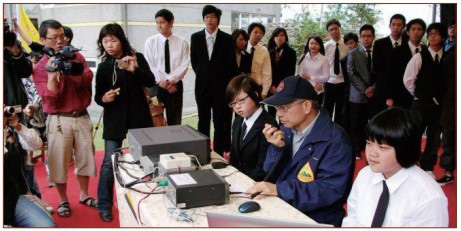 Competitions and games
ARDF (Amateur Radio Direction Finding), so called “Fox Hunting” is one of games that uses specific transmitting features of each frequency, combine with different antennas to find the “fox” (nickname for radio station) direction. Participating teams must use their DIY radio devices to find the hidden station by following the frequency direction, it is fun and at the same time, to prove the reliability of the self-made device. This event has been continuously for 6 years already. 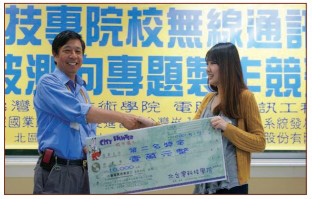 Educating and popularizing science and technology of amateur radio
Even though radio communication has become a common method to assistant daily lives in society, to spread the related technologic and scientific knowledge requires more effort through education. CTARL, and Taipei Tech have been conducting a series of computer and communication science popularize education programs. The courses are open to everyone, including elementary to university students, and adults.

Special events to connect with China, Hong Kong, and Macau
CTARL and Taipei Tech also have organized a regular event on Dragon Festival day, that uses satellite HO-68 (the first Chinese amateur satellite) as a communication bridge to connect to Mainland China, Hong Kong, and Macau. Through satellite communications, students send greetings to each other across the ocean on this traditional global Chinese holiday. The total number of participants was approximately 300 youngsters, who were inspired by ham radio and satellite communication.

JOTA camping event
In Taiwan, the Boy Scout organization arranges an annual camping October event called Jamboree On The Air (JOTA). It is an event involving radio communications, so the worldwide Boy Scouts communicate with each other through radio to deepen their friendship and expand their international view. CTARL and Taipei Tech have been supporting this event for consecutive 6 years, and there are over 10,000 volunteers assisting the participated scouts. The organizers set up HF and VHF/UHF communication devices that are prepared for the event. Ham radio operators help to guide the scouts in trying out actual radio communications. There are also ham radio education booths to introduce radio regulations and technologies. 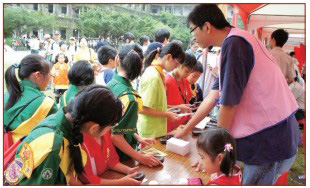 Satellite communications
To improve ham radio operators’ technologic knowledge and skills, NCC (National Communications Commission) and CTARL (Chinese Taipei Amateur Radio League) are getting together with Taipei Tech (National Taipei University of Technology) to organize international amateur satellite and digital communication annual workshops. The participants can learn the communication equipment fundamentals, and how easy it is to conduct international communications through satellites, as well how to use the APRS automatic position reporting system. There were 70 participants from all over the nation for the most recent event. 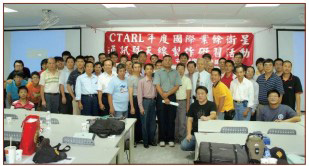 Communication antenna DIY
This activity is to invite civilians to get them to know about amateur ham radio communication modes and cultivate their skills. Participants can learn a variety of satellite and digital communication software, and also test their DIY antennas, a true multi-purpose radio communicating technology sociable event. The most recent event had 60 participants. There were lectures on technologies and actual DIY sessions to hand make a set of helical antennas, then compare with charts to analyze and measure DIY antenna specifications and impedance. The highlight of the event is to make communications through a satellite. 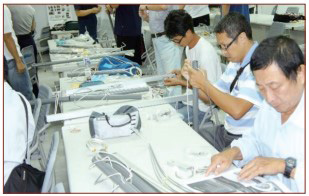 Mr. Kao has been operating ham radio for 38 years. Since he was a 4th grade student, he was inspired by his classmate who brought a ham radio as a toy when the class went on a school trip. Ever since then, his dream was to own a ham radio to operate. He said, “my first ham radio had changed my life and expanded my world”. He commented that to him, everything in life all connects with ham radio, and he has gotten to meet many people, and experienced interesting things all over the world through ham radio communications.

Through the RTI (Radio Taiwan International) production and channel platform, Mr. Kao shares his passion about ham radio technical knowledge through a series of videos, and later shared through various social media to popularize and exchange information for ham enthusiasts.
https://www.facebook.com/watch/106888630794748/2846926602225114/ 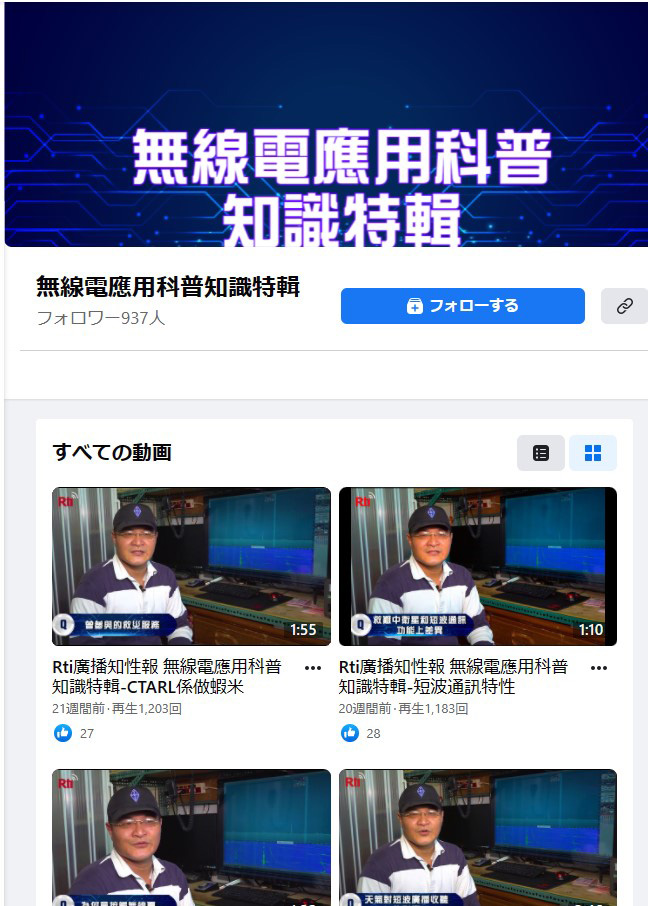 Other factors to breakthrough

Obtaining an operating license, which requires some effort, must be done. It requires a personal interest and passion in ham radio, however, just like exams for driver’s license, despite certain costs, and time invested. Hence, ham radio is a communication tool that provides benefits and security for the society, also brings convenience to people’s daily lives which a key subject to spread to the public.

Other points that need some changes are to simplify the process of regulations for ham operation qualifications. There are too many and even redundant categories for the operating license. Combining all amateur radio operation licenses to ease the procedure to authorize and reduce economic burden is necessary. Also, ham radio usable frequencies are still restricted due to region and national security regulations, and CTARL has been pleading to gradually open wider frequencies to be at least the same as other region 3 nations, the chairman of the CTARL committee of regulations, Mr. Jing-chang Ou, commented in NCC News 10505. 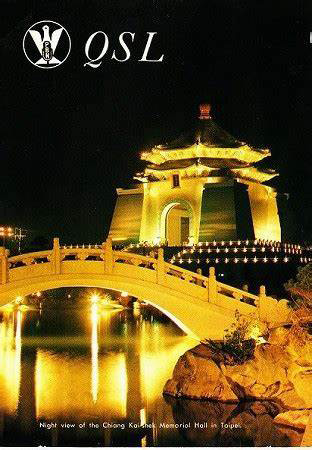 Ham radio has been treated by advanced countries in the world as an important science and technology resource. Besides traditional education, it also relays on the constant study and exchange of information between the ham radio operators.