CW Key, a hot topic found in Osaka’s Nipponbashi.
Now, how shall I modify it? 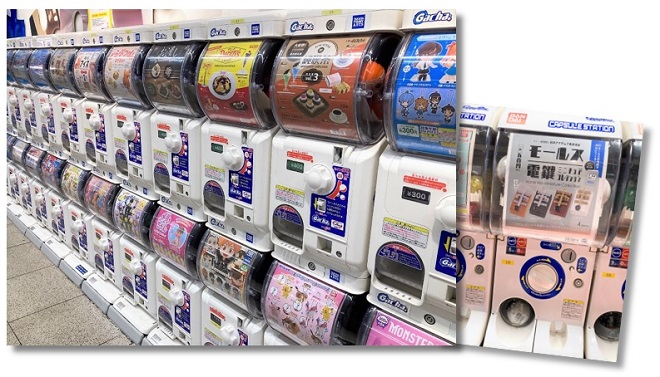 Have you ever heard of a toy called a "Capsule toy?" In Japan, they are called "Gashapon," "Gachapon," or "Gachagacha." For your information, "Gashapon" is a registered trademark of the Japanese toy manufacturer BANDAI, who makes the toys.

Capsule toys are toys that are in a round capsule about the size of a baseball. The capsule is made of a transparent plastic and contains a toy inside. Capsules are sold in vending machines, like those shown in the picture above. When coins are inserted into the vending machine and a lever is turned, a capsule toy comes out. Collecting capsule toys is popular among children and some adults in Japan.

Recently, these capsule toys have become a hot topic among hams in Japan. The capsule toy that is being talked about contains a "miniature Morse code key” made of resin. The size of the key is quite small, as shown in the photo below. 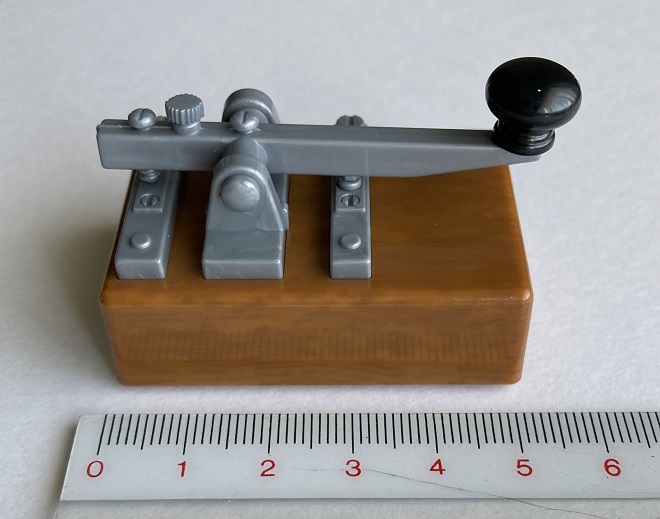 However, this is not a key developed for people operating CW. When the key lever is pushed, the built-in speaker emits the Morse code such as Dah Di Dah Di. This item is good as a shack decoration and useful for CW practice.

There seem to be four different colors of keys. The capsule toy containing the key that our monthly FB NEWS staff purchased was golden color and it costs 500 yen (about $3.50). Nowadays, those round spherical goods are not only for children.

When hams see the CW key, they want to see what's inside. I quickly unscrewed the back cover and looked inside to see a speaker, PCB, and batteries. Further removing two screws on the PCB reveals the component side. The component side contains an IC and a switch. 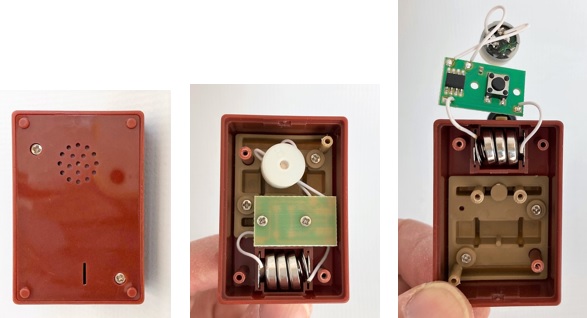 Although we do not know what is in the IC, from the viewpoint of energy conservation and cost reduction, the switch is turned ON when the key is pressed, thereby supplying power and sounding a beep. The switch also turns the power source ON and OFF.

In addition to this CW key, the round sphere contains a leaflet with an introduction to amateur radio and a brief explanation of Morse code. If you look closely at the explanatory leaflet, you will see "Japan Amateur Radio League (JARL)" printed on it. It is wonderful. Unfortunately, these leaflets are written in Japanese.

Now, this is where we hams come in. Since the key has a tact switch, we can make a miniature CW key by pulling the two leads from the switch and soldering a CW key plug to the end of it. I have heard that some OMs have already modified it. If you win a contest with this key, it will surely be news.

If you are ever in Japan, how about a capsule toy CW key as a souvenir?