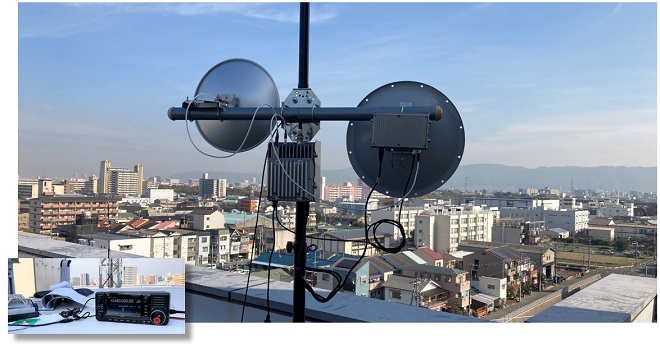 The mountains in the foreground block the line-of-sight for this communication experiment in SHF.

On November 17, 2022, Icom Corporation (Headquartered in Osaka Japan; President: Hiroshi Nakaoka; listed on TSE Prime) conducted a communication experiment on the SHF band between Osaka and Nara using the new IC-905. The IC-905 covers 144/430/1200/2400/5600 MHz and optionally 10 GHz, in all modes including D-STAR DV/DD and ATV and was displayed at the Tokyo Ham Fair last August. The team of the experiment in the field reported that it was interesting to confirm radio propagation.

The experiment was conducted on an approximate 25 km line between the six-story rooftop of Icom's headquarters in Osaka, and the company's Narayama Laboratory in Nara Prefecture, as well as nearby Kizugawa City.

Generally, line-of-sight communication is the mainstream at frequencies higher than UHF due to the directness of radio waves, but when there is a mountain range between the two points, mountain diffraction (Knife-edge effect) of radio waves occurs, and the experiment was to verify that communication is possible even when the area is shaded by mountains.

The maps used in this text are processed by the FB NEWS editorial team based on data from the Geospatial Information Authority of Japan.(https://www.gsi.go.jp/)

Osaka and Nara are located almost in the center of the two communication points, with the Ikoma mountains blocking the line-of-sight between them. The radio used in the experiment was the IC-905, which Icom plans to release for sale, and the frequency bands used for the communication experiment were 5600 MHz and 10 GHz. The antennas for both bands were parabolic antennas.

It is known that in the SHF band or even higher frequencies, radio propagation gradually becomes more linear, similar to light. The Icom team thought it would be interesting to see whether communication will be impossible under non-line-of-sight conditions as in this case, or whether communication by mountain diffraction (Knife-edge effect), known as anomalous propagation, would be possible.

The experiment was conducted with two radio stations, one at Icom's headquarters (JK3AZL), and one at the mobile station (JL3ZAB) near Narayama Laboratory. Each of them started early in the morning, setting up their radio equipment and antenna systems, and started communicating at 9:00 a.m. on the same day.

The mobile station then moved to the Icom Narayama Laboratory to conduct the same experiment. They could not see the summit of Mt. Ikoma due to the location, so they were barely able to communicate on 5600 MHz and CW. Unfortunately, communication at 10 GHz was not successful.

The experiment revealed that mountain diffraction phenomena occur even on mountains with relatively gentle peaks such as the Ikoma Mountains. Conversely, if the peaks are not visible, communication is difficult.

A detailed experimental report will be posted in a special New Year's program to be released on January 5, 2023.