This is the second castle in the JACOTA series of articles about operating at historical castles and castle ruins in Japan. The castle is Fukuchiyama castle, located in the city of Fukuchiyama, Kyoto prefecture.

Fukuchiyama Castle was originally built in 1572. It was reconstructed on the same foundations of the older castle in 1580. Like many other Japanese castles, it was destroyed in 1872 during the Meiji Restoration (1868 ~ 1912.) In 1986, the castle keep was rebuilt with the support of the residents. It also has a local history museum on the grounds. A water well named ‘Toyoiwa no i’, located in the castle grounds, is the deepest castle well in Japan.

The weather forecast was for rain that Friday, but I thought I might take a chance and go. The following Monday was a holiday and so there would be a lot of visitors over the weekend….so Friday was chosen as the operating day. As it turned out, the rain forecast was correct….and it rained all morning with just a few breaks. The few times it stopped raining enable me to take a few pictures. 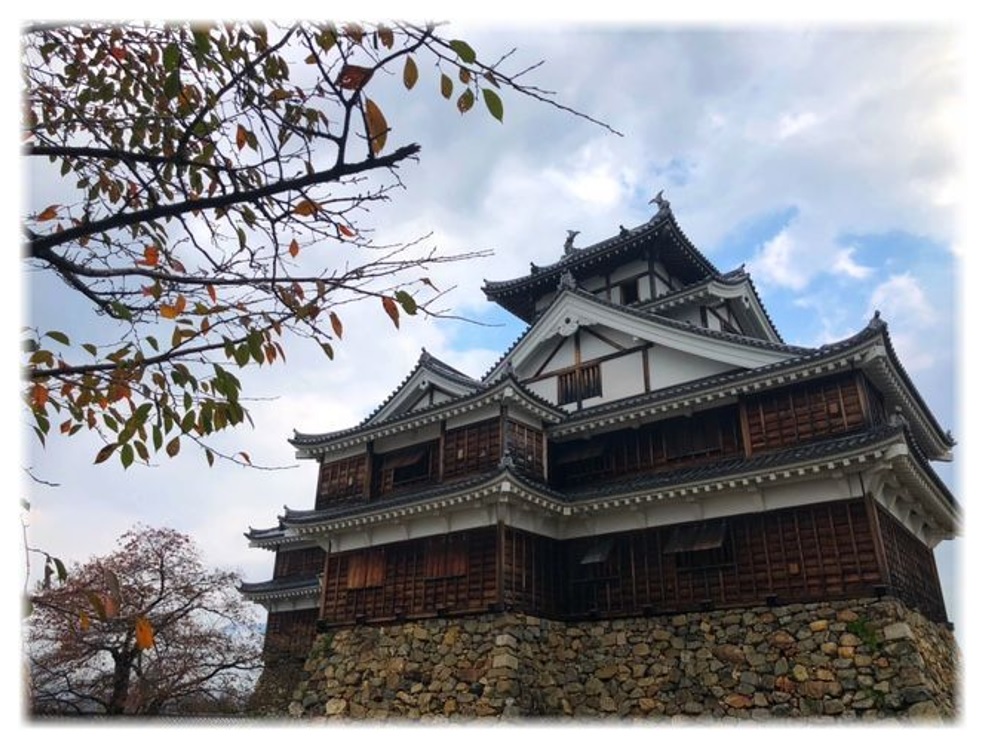 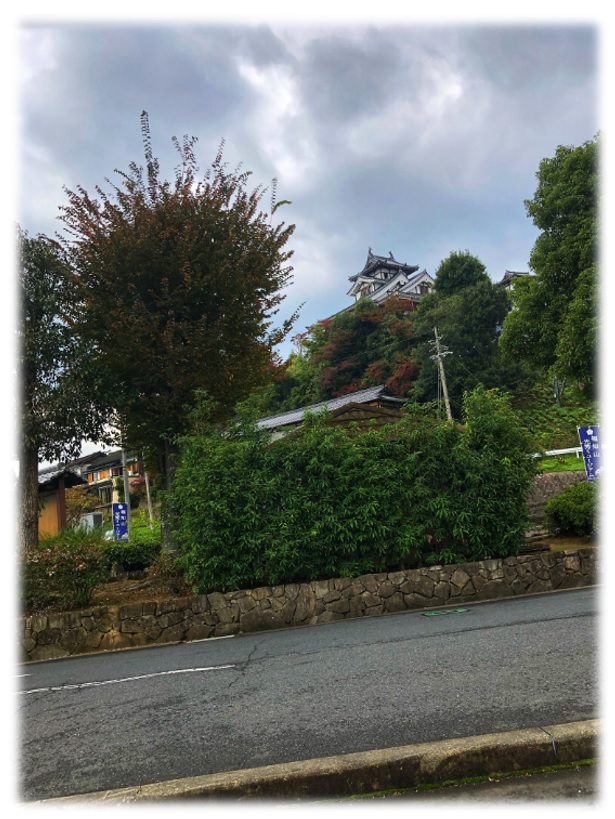 I bought a cart from my local DIY store and loaded it up with antenna components the IC-705, umbrella, camp seat and camera equipment. It was too far from the parking lot to the castle to make multiple trips. 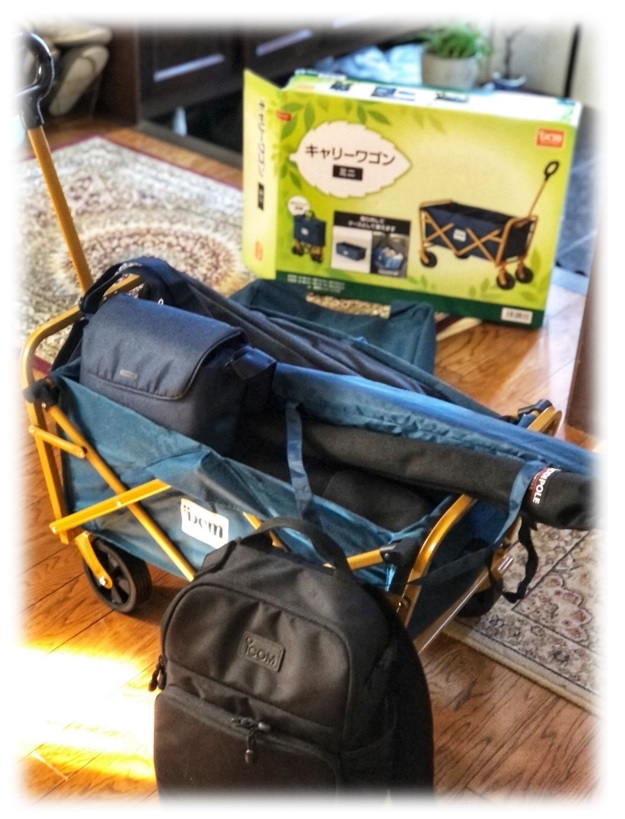 You must go up a long and steep slope to reach the castle. Pulling the cart with all the equipment was a real chore, and I was quite tired when I finally reached the top where the castle Tenshu (castle keep) is at. One slip and the cart and all the equipment would have gone roaring down the slope and crashed into something or someone! 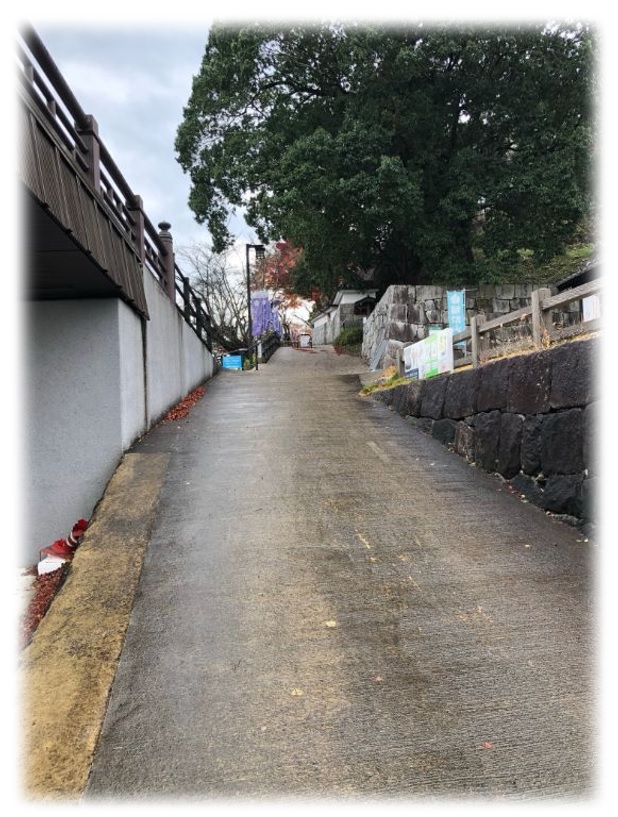 The Keep was rebuilt and is in very good condition. It is quite impressive when you turn the corner of the slope and see it for the first time up close. The base of the Tenshu is built with stones in the Nozura style…random sizes stacked up. The base was very solid, and the rock were of various sizes, color, and patterns. The wood on the walls looked like it had been refinished not that long ago and was quite impressive. 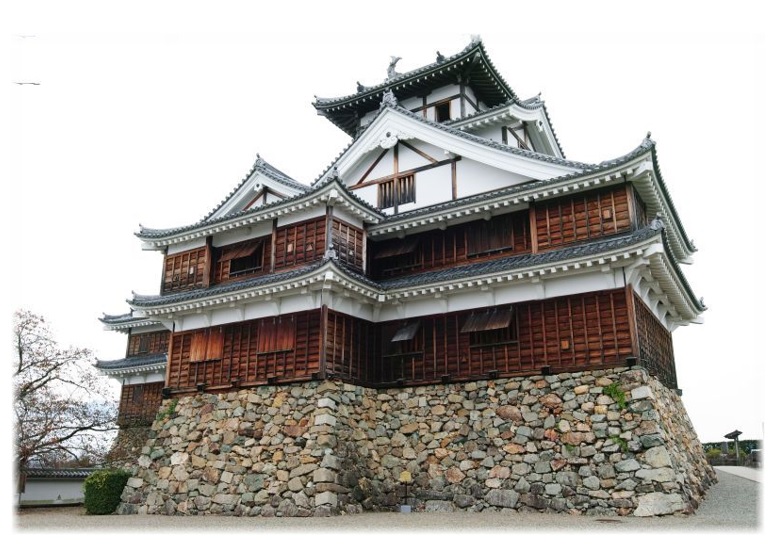 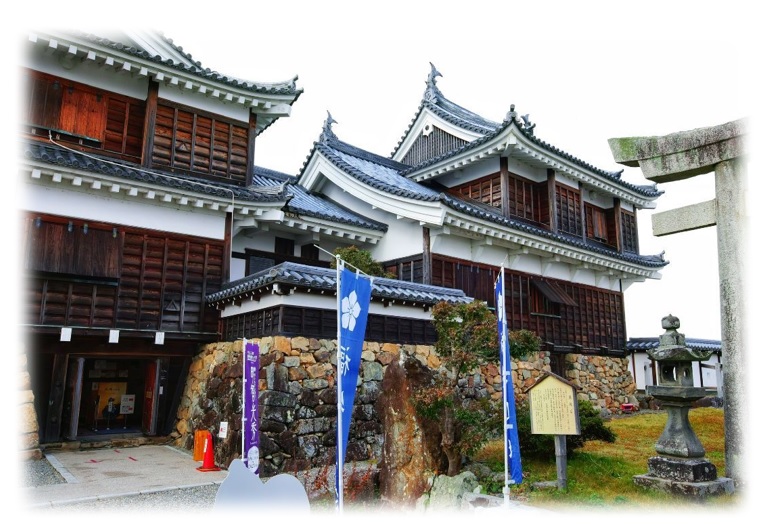 I chose an operation location near the edge of the castle ground, unloaded the cart, and covered the bags from the rain. The few visitors that came to the castle that day would stop and stare at this foreigner and his assortment of equipment! A few did inquire about what I was doing and were surprised to learn about operating ham radio at the castle. 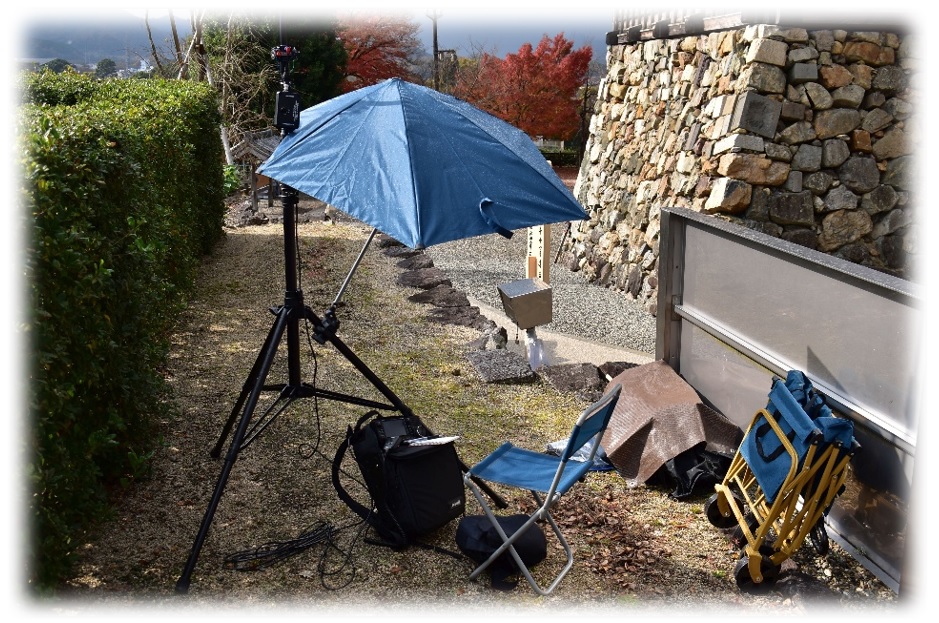 I set up a 7MHz Buddipole antenna using two antenna arm sections, one coil and a long whip element. The counterpoise wire was connected to the VersaTee adaptor at the base and expended out along a line of bushes. The end of the counterpoise was attached to some branches, about one meter above ground. After attaching the clip to the recommended place on the coil, I checked the SWR with my antenna analyzer. I made a few adjustments by shortening the counterpoise and was able to get the SWR to about 1:1.5 at the center frequency. I also attached an umbrella to the tripod to stay dry, and to protect the IC-705 and my contact log. There was a contest going on at the time, and the and was full of high-powered stations. 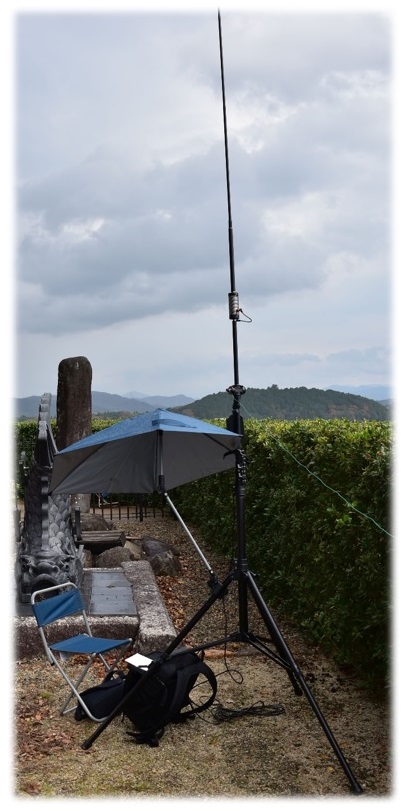 I also had a noise level of between S5 and S7, which I did not expect. I think it might have been caused by the microwave tower with lots of other antennas on it. I did not really pay that much attention to the tower the first time I visited the castle, even though it is quite tall. A lot of VHF/UHF antennas are also on the tower for possibly police and fire departments as well as business band use. 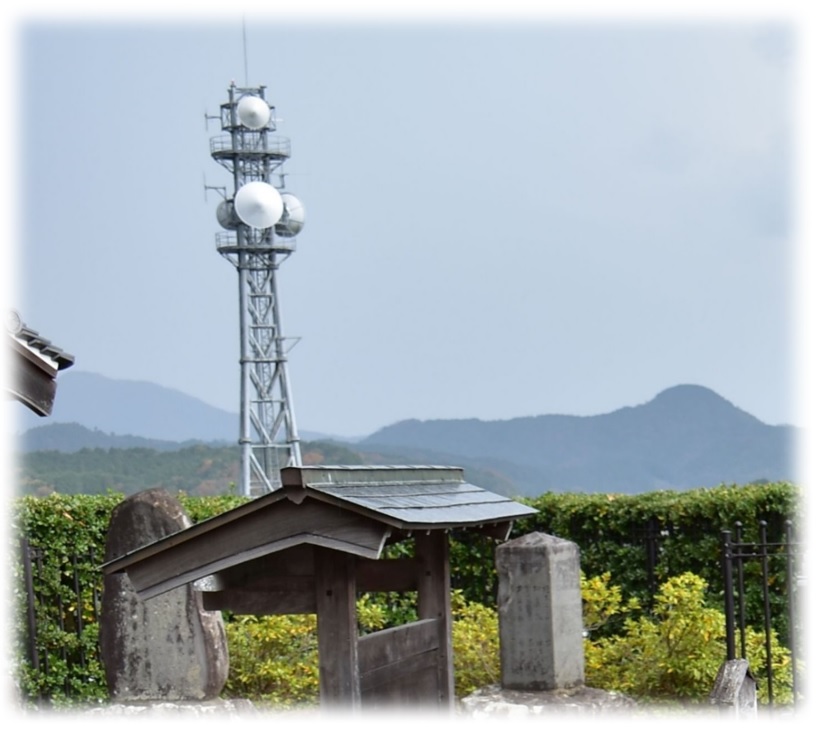 There was also a wireless security camera system nearby, and the 1,300 volt DC electric train line and station were not that far away. 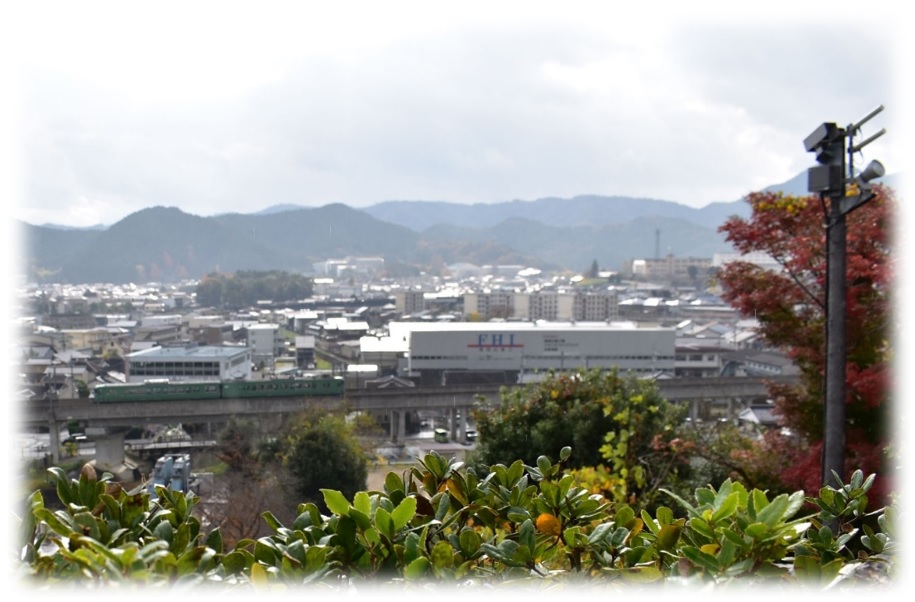 I called CQ a few times in SSB, but I had more luck calling back to other stations that were calling CQ. The rain started again, and it was heavy at times. The umbrella was too small, and I, the radio and my logbook got wet! This made operating difficult and a bit miserable. 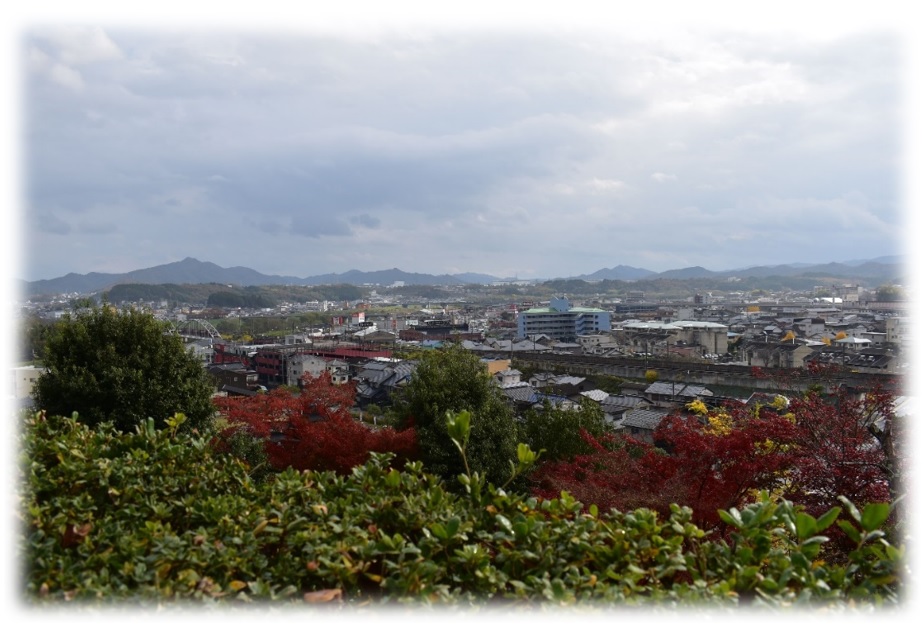 I checked the weather map again, and it showed a huge rain front approaching in about 30 minutes…one that would last for over an hour or two, so I decided it would be best to take down the station, pack up and get back to the car. My operating time was only about an hour or so, and it was a bit frustrating with the rain and noise, but still a lot of fun. I had a chance to operate at an historic site, meet a new ham, and take a few pictures of a very nice castle. It was worth the 2 ½ hour drive from my home to Fukuchiyama castle.