Part 2, More about CTARL and other related facilities in Taiwan.

As part 1 of this series mentioned, Taiwan’s ham radio development started out in the early 1990s, considered rather late, however, it grew fast in a short period of time. One important charismatic person was the founder of CTARL, Mr. Tim Chen, who has been a legend in the Chinese ham radio history. Mr. Chen upgraded the Chinese Radio Association (CRA) to the Chinese Taipei Amateur Radio League (CTARL), which has been the center society of ham radio groups all over the nation.

CTARL - Taiwan ham radio achiever and major activities in records
CTARL was formed in March 1991 and has been officially the main organization of ham radio in Taiwan since then. In October, the association applied to join the IARU through the office of the International Telecommunication Union (ITU), and became part of region 3, which is for Asia and Pacific Ocean (Region1 is for Europe and region 2 is for North and South America.) Along with a total of 168 member countries, it participates in the international conference once every three years, and other significant international events. Every June to July, CTARL also participates in the ASIA VHF QSO, a 2-day party organized by Japan, Korea, and Mainland China. So far, CTARL has been the only genuine civilian group in Taiwan that has joined a global organization. 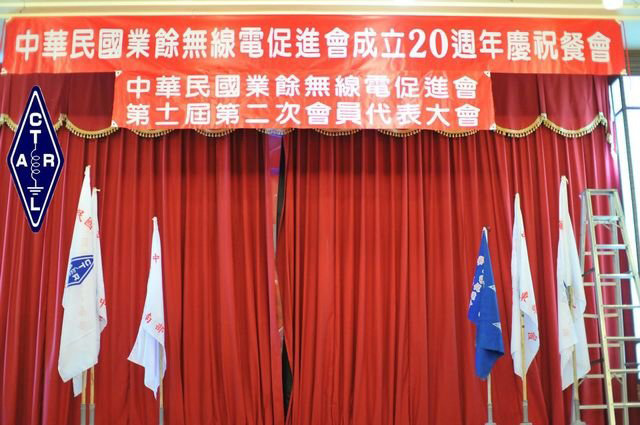 In addition, CTARL also invites global ham radio masters over for variety of special communication events, also issues special callsigns for offshore islands of Taiwan, for instance, BO0K for Kinmem island, BO0M for Matsu island, BV9A for Pen-hu island, and BQ9P for Pratas island in South China Sea. Even Yu-shan, the highest mountain in Taiwan, has callsign of BW0T and so on... For more details go to http://www.ctarl.org.tw/bv5ya/english_old/introduce2.htm. All those activities attract attention from around the world.

Lead by CTARL, below are some other major activities to connect with other nations in ham radio that Taiwan has made in the recent decade.

With Japan
With a long-term connection with Japan Amateur Radio League (JARL), CTARL has also been actively with JARL. In August 2015, President of Council, Mr. Kuo, led 30 members of CTARL on a visit to Japan to be part of the celebration of JARL’s 90th anniversary ceremony, which deepened the friendship between the ham members of both countries. 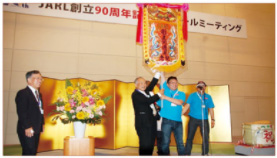 With the USA
Since the Federal Communications Commission (FCC) of the USA started out Volunteer Examiner Coordinator System (VECS) examinees who passed a test and received recognition from the American Radio Relay League (ARRL) to be an international examiner to help more examinees to grant ham radio operation licenses. ARRL members have been to Taiwan and conducted special exam four times. So far, 5 Taiwanese operators have become VEs, and also established VE groups for organizing operation license exams in 2010 and 2012.

With mainland China
Recent years, ham radio has been developing dramatically in mainland China in many aspects for information, frequency range, administration, and cultivation of new operators. Regulations and radio devices have also reached international standards. The Chinese Radio Amateurs Club (CRAC), who is responsible for operating licenses, reported that there are already over 60 thousand licensed operators since 2013 (data of 2016). CRAC has visited Taiwan for communication regarding technical and regulation matters, the first time in 2015. Both China and Taiwan have successfully learned the mutual benefit of working together for ham radio events. 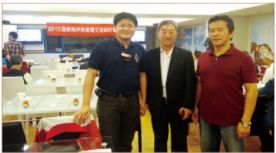 CTARL have been regularly hosting CQ World-Wide contests. For applications for visitors from other countries to operate in Taiwan, inquire at ctarl.web@gmail.com.

NCC (The National Communications Commission)
As part 1 briefly introduced, this government facility originally belonged to the Directorate General of Telecommunications and Department of Broadcasting Affairs of the Government Information Office. The two agencies merged to establish the NCC as the authority responsible for regulating telecommunications and broadcasting in Taiwan since its established on February 22, 2006. It has been one of the main supporters for ham radio development in Taiwan, therefore it also has been an important link with the government for CTARL in many aspects.

ARES (Amateur Radio Emergency Service)
This is an organization made up of over 80 volunteers, trained by CTARL, and most of the members are ham radio operators. It has played an important role in Taiwanese society when it comes to major disasters. They are divided to two teams, one supports the base station of public health agencies for the whole nation, and the another goes to where the disaster happened.

Since the ham radio operators are interested in the technology of radios, they purchase or build their own the equipment, and are willing to serve society, and prove how ham radios are needed in disaster situations. They provide and support the communications for the people inside the disaster area to help rescue communications, assistant administrative efforts and medical systems with their own devices and equipment. With their actions, some of the major disasters in the past, for example the earthquake on September 21,1999, the disaster caused by the typhoon around Taoyuan in 2001, and the “88 floods” that occurred on August 8, 2009, caused by the huge typhoon Morakot. The damages of those unfortunate events were mitigated by the performance of those volunteers. 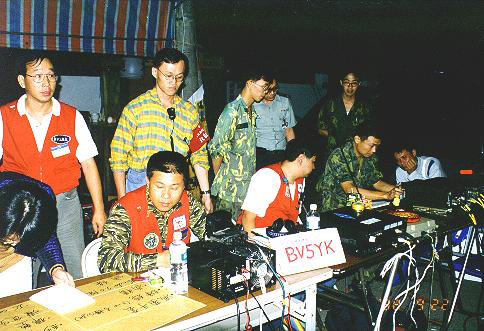 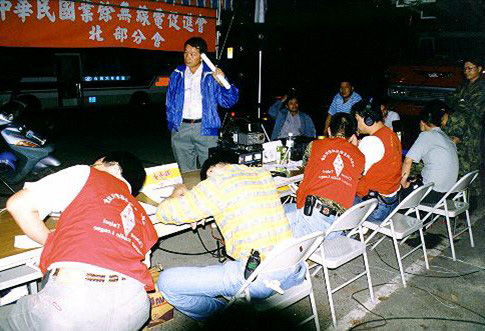 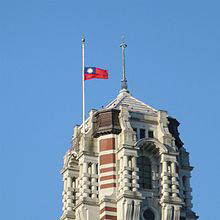 National flag flies at half-mast for the “88 floods” disaster

ARES members not only participate as a rescue team when disasters occur, they also volunteer to support with festivals, sports, and other national civilian events to bridge the citizens and the government. Their contributions inspire global government, and comments in global meetings have been heard over and over; amateur radios have been an important and reliable communicational system when it comes to establish an integrated communication backup system during natural disasters.

Providing optimal services to its listeners has always been RTI’s primary mission. Aside from refined and high-quality programming, RTI is committed to providing the public with objective, hard-hitting and wide-ranging news content. Over the years, RTI staff members in areas ranging from programming and news to production have won Golden Bell Awards, Cross-strait Relations and Mainland News Reporting Awards, Excellent Journalism Awards, and others in Taiwan. The RTI has also received international awards from the Association for International Broadcasting (AIB), the Commonwealth Broadcasting Association (CBA), and the New York Festivals Awards. (NYFA).

* Source of information provided by the planning section of the RTI, at the official site Intro to RTI - RTI Radio Taiwan International 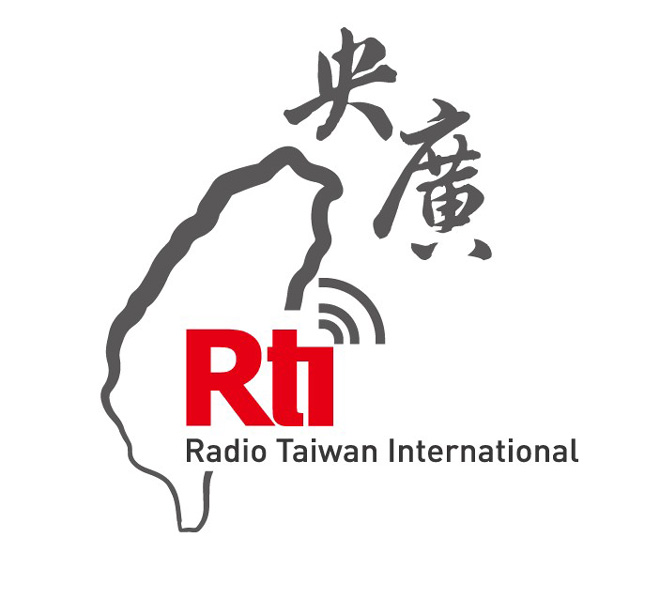 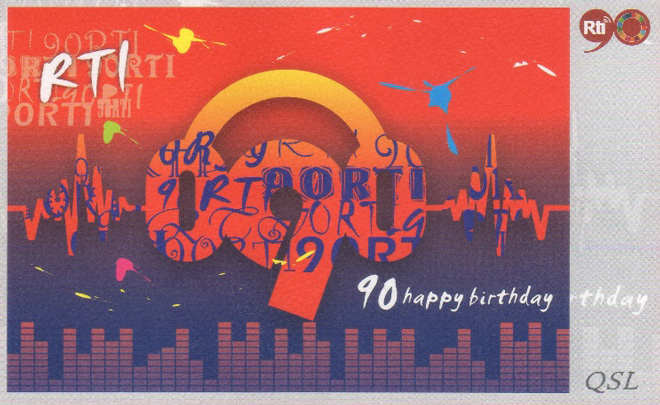 RTI also has been a channel for ham radio operators to propagate ham radio information and spreading relevant knowledge to support ham radio development indirectly, as well provide communicating platform for radio enthusiasts exchange information with each other through its network. Chief secretary of CTARL, Mr. David Kao, has been regularly uploading radio technical information for use by hams from beginners to savvied operators, through the RTI broadcast channel, to spread the essence of ham radio in society.

Taiwan is not an exceptional, popularize ham radio of course meets its obstacles, one of the main causes is that new communication devices developing all over the world rapidly, with issues to overcome. The next article will discuss more about what Taiwan has been doing to cultivate the future ham radio generations and spread radio knowledge.