Level difference under open and load ends of an SSG 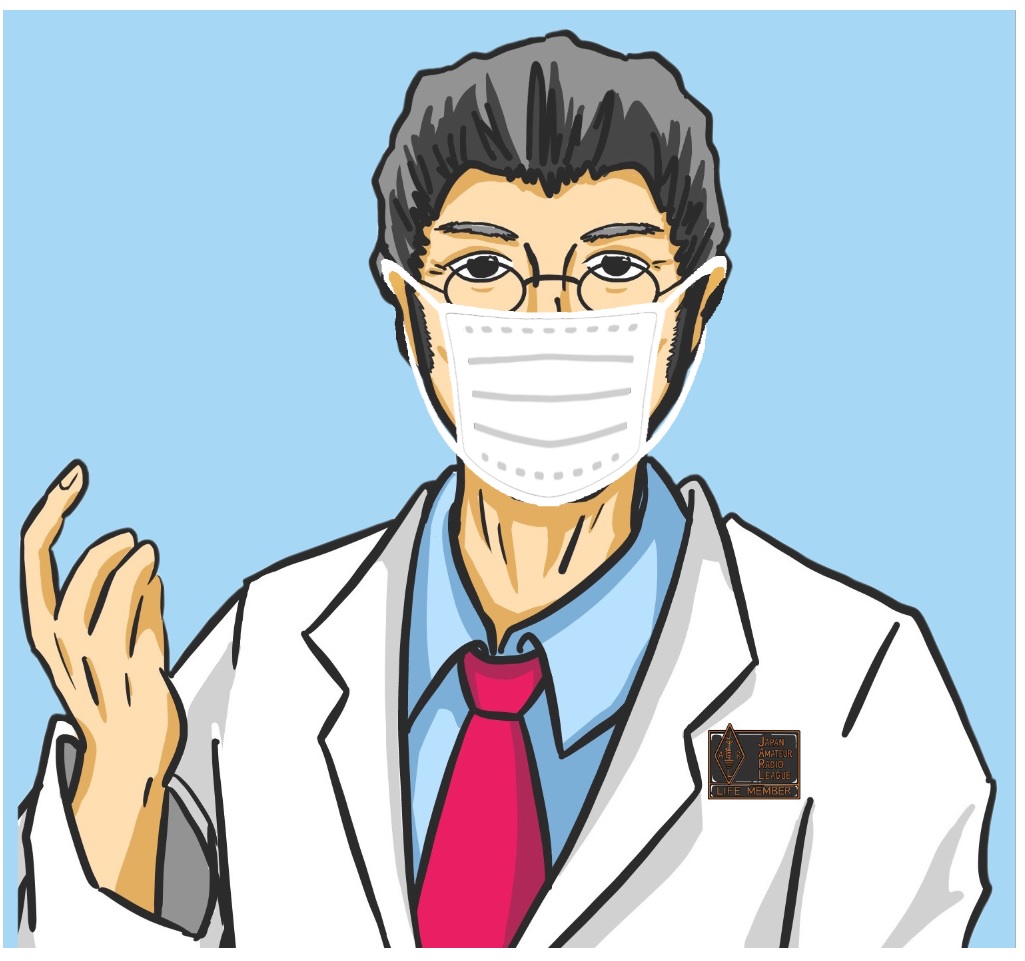 When I was young, there was a time when the receiving system used dBµ to describe the signal level and the transmitting system used dBm. However, when foreign-made SSGs (Standard Signal Generators) came into Japan, use of the dBm notation increased. I remember that I suddenly started using dBm one day. (SSG hereafter abbreviated SG)

Relationship between dBµ and dBm 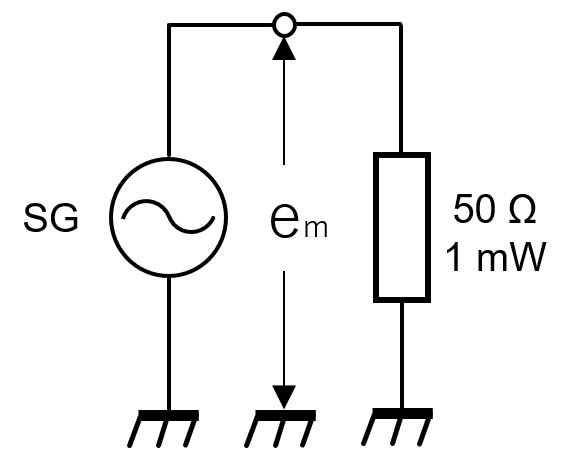 Next, in order to consider the relationship with dBµ, let's calculate the voltage, em, generated across the 50 Ω load that is the SG output level. It can be calculated as an extension of Ohm's law. Since 1 mW is consumed in a load of 50 Ω, the power, P, can be derived from equation (1) from the voltage and the value of the load. Equation (2) is the equation obtained by finding em from equation (1).

I mentioned earlier that the unit of dBµ defines 1 µV as 0 dB. The voltage level for 0.224 V, that is, 1 mW, which was calculated by the above equation (2), was calculated by the following equation (3), which was 107 dB. Since 1 µV is defined as 0 dB, 107 dB is also 107 dBµ, and the reference level, the letter “µ” is added after dB to express what the reference is in an easy-to-understand manner.

Conversely, if 1 µV is expressed in dBm, it will be −107 dBm as shown in equation (4). This also takes the letter “m” of 1mW and adds “m” after dB to make it dBm so that you can see that 1mW is the standard. Logarithm calculations cannot be done without a scientific calculator at this point.

About the open end and the load end

A brief diagram is shown in Figure 1 above to investigate the relationship between dBµ and dBm. However, when considering the open end voltage and load end voltage of the SG output, the equivalent circuit on the SG side is inaccurate in Figure 1. And, as I mentioned at the beginning of this article, the problem is that the level drops when the load is connected. It cannot be used as a solution. When looking at inside the SG from the output side of the SG, the output impedance of the SG we usually use is 50 Ω. Therefore, it can be said that a general equivalent circuit is drawn as shown in Figure 2. 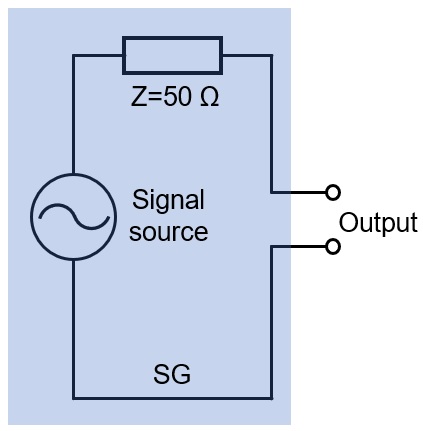 A load with an impedance of 50 Ω is connected to the SG equivalent circuit depicted in Figure 2, but the 50 Ω is not actually connected as an independent component in an SG, and is an internal impedance. For simplicity, let's assume that the voltage level of the signal source is 2 V and no load is connected with the SG output terminals. Consider how many volts will be at the output terminals. The answer is 2 V, the same level as the signal source. It is difficult to understand.

Although the impedance of 50 Ω is connected inside of the SG as an equivalent circuit, no current flows in the circuit because nothing is connected to the output terminals. At the output of the SG, the voltage appears even when no load is connected to the output terminal. Now, let's connect a 50 Ω load to this output end. The load will be referred to as ZL. The circuit at that time is as shown in Figure 3(a), and if it is rewritten in an easy-to-understand manner, it will be as shown in Figure 3(b). Figures 3(a) and (b) have different shapes, but the same circuit.

Figure 3. Equivalent circuit when a 50 Ω load is connected

Generate a 10 MHz unmodulated sine wave in SG. Observe the waveforms with and without a 50 Ω dummy load connected to the SG output with an oscilloscope. 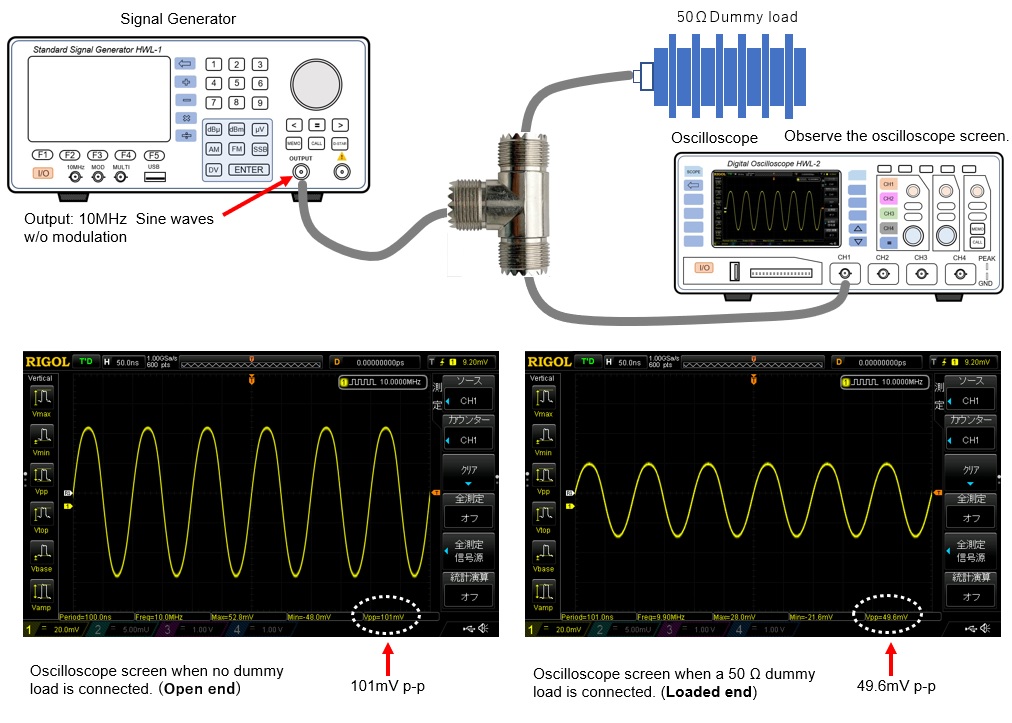 In Figure 5, the peak-peak (p-p) of the waveform when the dummy load is not connected (no load / open end) was about 101 mV. With a 50 Ω dummy load connected, the output level at its load end was 49.6 mV. As calculated, you can see that the SG output has been halved.