Let’s use MOSFETS
Understanding the switching function of MOSFET transistors 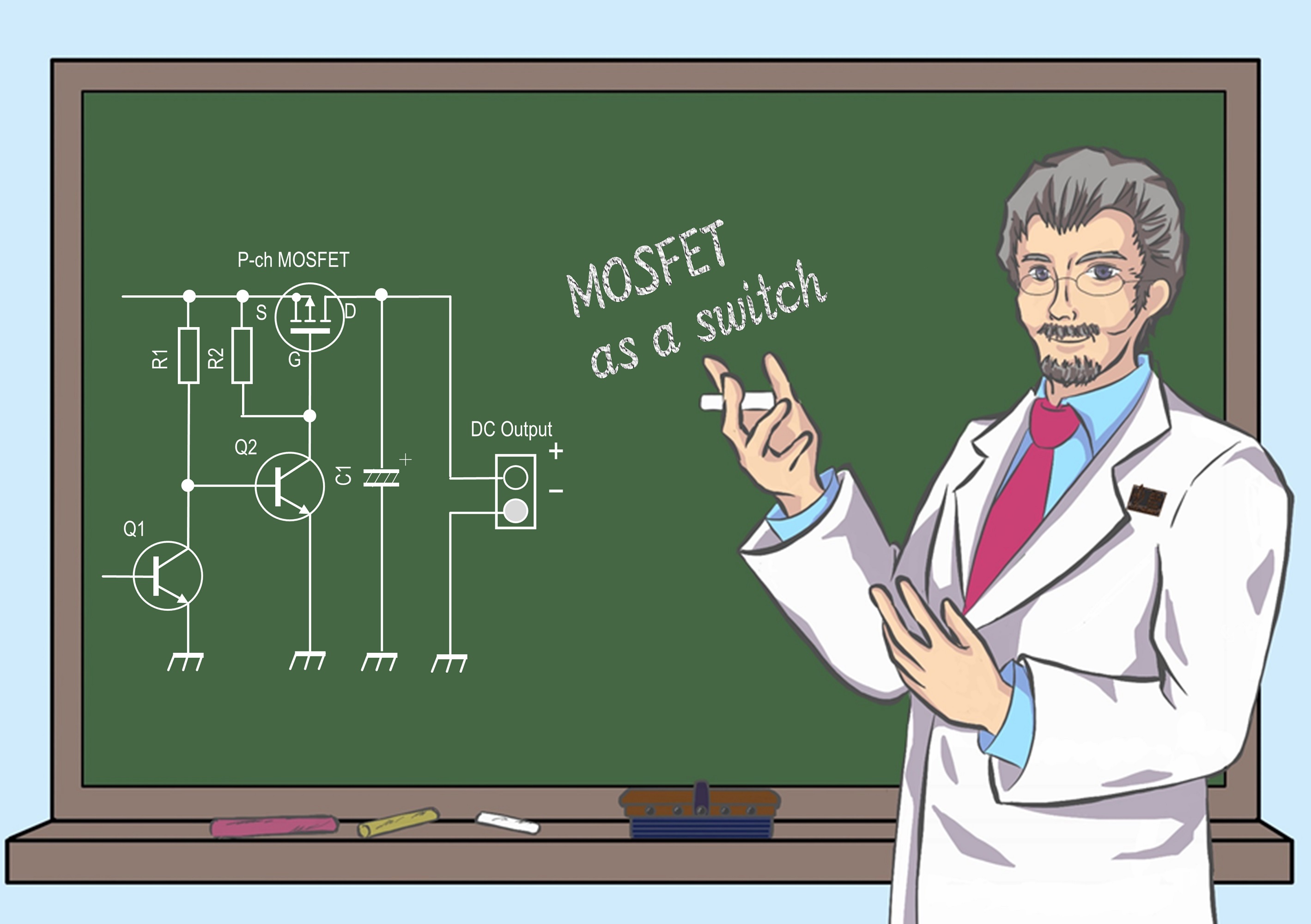 MOSFETs are often used for switching circuits. They function by applying a voltage, without passing large current as with mechanical replays. Here I will explain the switching operation, which is a major feature of MOSFETs.

What is a MOSFET?

Since it is an FET, it is not a current driven element that controls the collector current by changing the base current as in a normal bipolar transistor. Since the current between the drain and source is controlled by the gate-source voltage (VGS), it can be said that it is a voltage driven element. A voltage is applied to each lead-wire of the MOSFET, but the structure does not allow current to flow through them, which is very useful for energy-saving circuits.

Due to the structure of MOSFETs, there are two types of FET, as shown in Figure 1. One is an N-channel MOSFET and the other is a P-channel MOSFET. In terms of operation, there are two types of MOSFET: the depletion type, which is often used for high-frequency amplification circuit, and the enhancement type, which is used in switching circuits. This article is limited to the latter enhancement type MOSFET.

The resistance value (RDS) between the drain and source changes, depending on how the voltage (VGS) between the gate (G) and source (S) of the MOSFET is applied. This issue of Short Break features an article on electronic circuit using P-channel MOSFETs. This utilizes the fact that the voltage applied to the gate is (+) voltage or the same potential with respect to the source, so that the drain and source are turned OFF.

If you understand the basic switching operation of MOSFETs, you can turn electronic circuits ON or OFF that were previously turned ON or OFF with mechanical relays. With MOSFETs you can save energy as well as digitize the circuits. 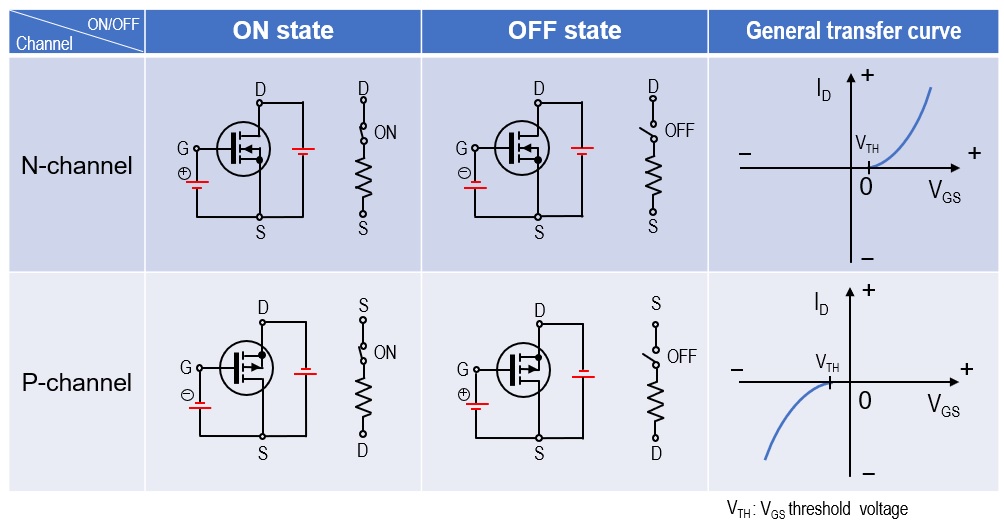 (2) Switching time
Switching by a mechanical relay is controlled with a transistor, as shown in Figure 3. When a voltage is applied to the base, the base current (IB) flows and the transistor used for switching turns ON. When the transistor turns ON, a current flow through the drive coil of the relay, which becomes an electromagnet, and the contact of the relay makes a click sound and connects to another contact. At this time, the contacts are switched mechanically, which causes a physical time delay. It takes less than 10 milliseconds for small mechanical relays, but it seems that it takes several tens of milliseconds for large relays. 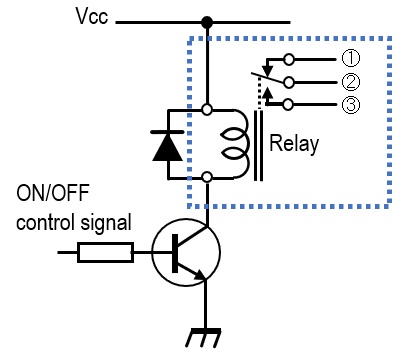 According to the 2SJ555 data sheet published by Renesas Electronics Corporation, the turn ON/OFF delay time is in the nanoseconds. In other words, since it is 10 to the power of minus 9, it can be seen that it is incomparable to the millisecond order of mechanical relays.

(3) Resistance (RDS) between drain (D) and source (S)
The data sheet mentioned above shows the ON-resistance value (RDS) when the MOSFET is operating as a switch. If the MOSFET operates as a switch, the ON-resistance value (RDS) between the drain and source that replaces the relay contacts is very important. The data sheet states that RDS is 0.017 Ω when VGS = -10 V and ID = -30 A. 0.017 Ω is a fairly low value. Assuming that this MOSFET switches the current of 20 A that flows when a 100 W radio is connected, the power consumed by RDS is P = 20 x 20 x 0.017 = 6.8 W from P = I2 x R. You will need a small heatsink, but I don't think it is enough heat to cool with just a fan.

(4) Specific example of VGS vs. RDS
Figure 4 shows the principle of turning the P-channel MOSFET ON or OFF with the gate voltage. When the SW is ON (switch is closed), the gate is connected to ground through the switch, so the gate voltage becomes zero. As a result, the drain-source resistance (RDS) becomes low and comes close to conduction. Conversely, when the SW is turned OFF (switch is open), same voltage as the source is applied to the gate through the resistor (R). The P-channel MOSFET is turned OFF and no current flows between the source and drain. 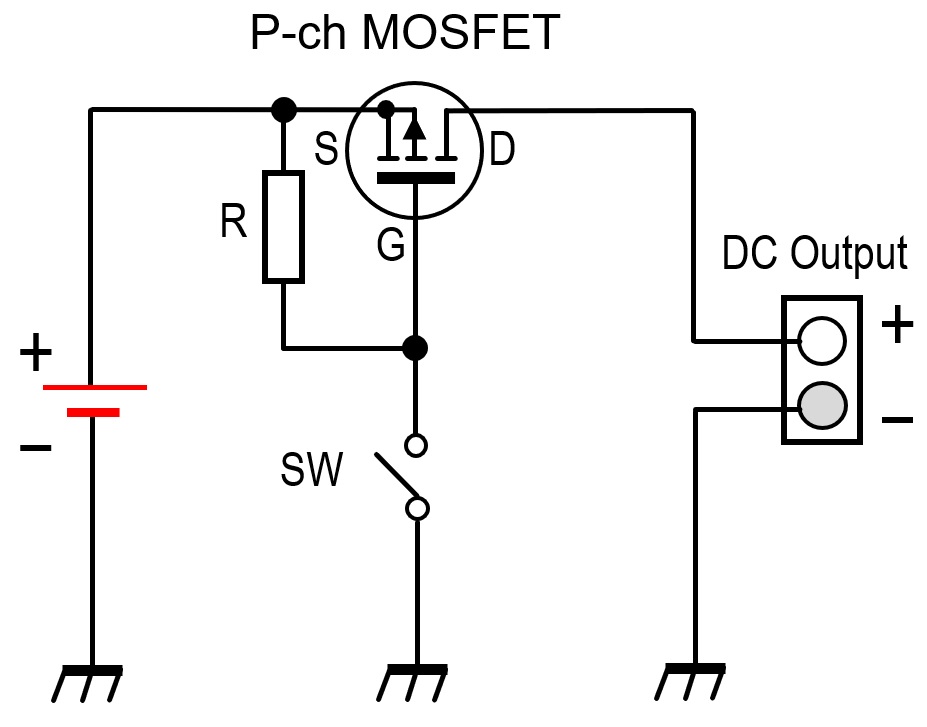 The overvoltage protection device built by replacing the switch in Figure 4 with a transistor is published in this issue of Short Break.