25th Comparator
Confirming the function of a comparator by experiments 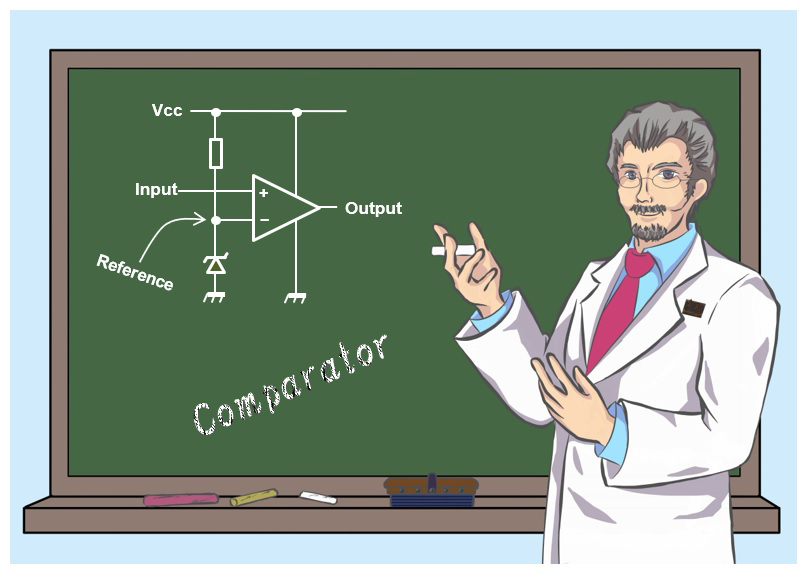 For those who write computer programs, the "if, then, else” statement is a piece of cake, but it may be unfamiliar to hardware engineers who build electronic circuits. Even so, if you have done a little bit of writing in the BASIC language in the past, you might think of the “if, then, else” as a programming statement meaning "If X is True, then do Y, else (otherwise) do Z."

Comparison circuit with a comparator

Although there are differences between software and hardware, there is hardware that behaves like an “if, then, else” statement in an electronic circuit. It is a circuit that compares signal levels A and B, and operates such as if A>B, then Level = High, else level = Low. The LM358 operational amplifier was used for the comparator.

Feature of the operational amplifier

There is an article in this issue of Short Break about building an overvoltage protection device (OVP) using an LM358 single-power operational amplifier. By reading both these articles, you will have a better understanding of comparators.

The function described in (4) above is an original function that Op-Amps have. It is well known as an amplifier that if you simply input a signal on the (+) terminal or (-) terminal, the output signal will be inverted or non-inverted.

The (+) and (-) input terminals of this Op-Amp can be used as a comparator. I think this comparator is exactly the part that follows the "if, then, else” statement" in programming.

Pins 4 and 8 are terminals common to each amplifier for GND and DC power, respectively. Datasheets for other Op-Amps that you often see have two plus and minus power supply symbols, such as V+ and V-. Having two power inputs, such as +5V and -5V, is a bit troublesome to use for building simple electronic circuits. The LM358 can be used with a single power input, and I think it is easy to use for electronic projects. 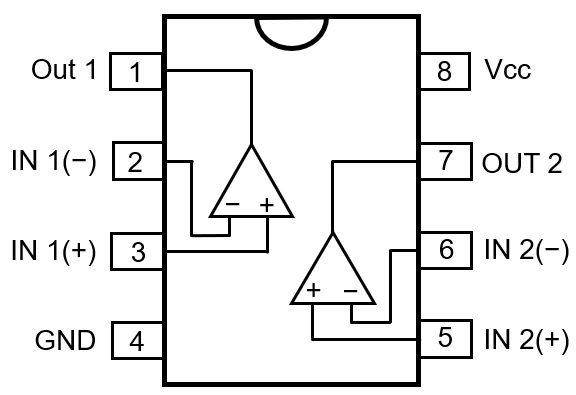 I will explain using the LM358 Op-Amp as a comparator. It is a circuit that compares two signals, and then outputs a High or a Low value if one input level becomes higher than the other input level.

Let us confirm the function of the comparator by experiments

I built a circuit as shown in Figure 2 using the LM358. This is a typical comparator circuit. It is good to solder the parts to the universal board, but for the experiment, first just place the parts on the breadboard. This makes it convenient for removing or replacing the parts later. There are two amplifier circuits included in the LM358 package, but the experiments do not use the amplifier connected to pins 5, 6, and 7.

Figure 2. Circuit diagram used for the experiment and place parts on the breadboard

I determined voltages on each terminal by calculating and by actual measurement, and the values are shown in Figure 3. Connect four 1.2V rechargeable batteries in series for the power source, whose calculated value was 4.8V, but the measured value was 5.2V. Pin 8 is 5.2V because it is directly connected to the power source. Pin 2 is 2.6V, which is half of 5.2V, because the voltage of 5.2V is divided by two identical resistors. The actual measured value was 2.4V. The voltage on pin 3 is taken between a 22kΩ fixed resistor of and a 50kΩ variable resistor. When the value of the variable resistor is zero, pin 3 has the same potential as GND, so it is 0V. When the resistor is the maximum of 50kΩ, the voltage on pin 3 is taken between the 22kΩ and 50kΩ resistors so it is 3.6V in the calculation.

In other words, the voltage applied to pin 3 can be continuously adjusted between 0 and 3.6V using the variable resistor. This voltage was 0 to 3.6V in actual measurement.

Figure 3. Voltages on each pin by calculation and actual measurement 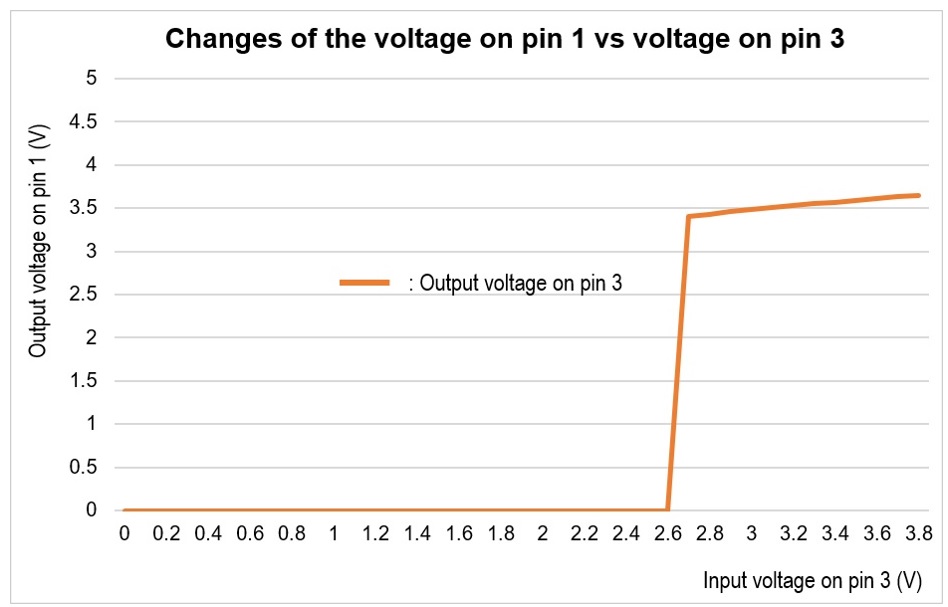 On the contrary, if the voltage of pin 3 is kept constant, and the voltage on pin 2 is gradually increased from zero, the level on pin 1 was initially High, but drops from High to Low just above the voltage on pin 3. I think that various applications can be made by using the function of this comparator.

For example, if you use a CdS whose resistance value differs depending on the light instead of the resistance connected to pins 2 and 3, it is possible to switch something depending on the intensity of the light. In addition, various application examples can be considered. Please try to challenge the OP-Amp.