The first impression of the MLA

It's been a year since Icom released the IC-705 Portable transceiver. I had an opportunity to use a magnetic loop antenna that covers 7 to 28 MHz. This antenna is called a Magnetic Loop Antenna (hereafter called MLA).

I connected the MLA to my IC-705 in my office on the 5th floor and tried to receive on the 7 MHz band. It was amazing and I was surprised that the signal came in to the radio from the outside through a window glass. The antenna is like an active antenna. The ham friends who were with me even praised it as "amazing." 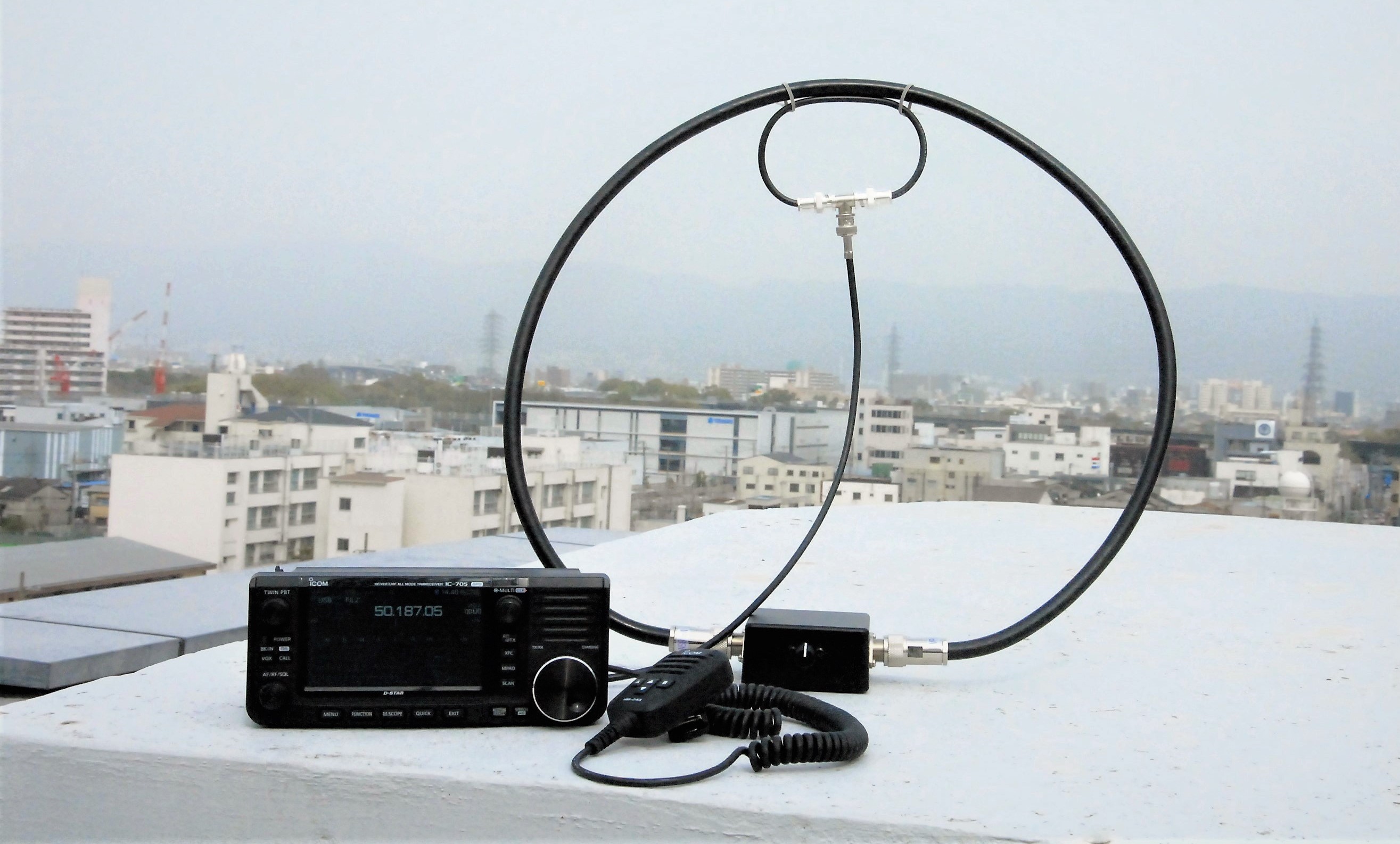 One day, I hiked to the top of a mountain near my home in southern part of Osaka. I decided to try an experiment on 7MHz, which I usually use on CW. and connected the MLA to the IC-705. The reception was as good as it was in the office. However, transmission was not as impressive as reception. The radio output was 5W (QRP), but even if I called a station with a strong signal, I couldn't get a call back from the station, and I was honestly frustrated. When I made CQs on SSB or CW, there was a reasonable response. 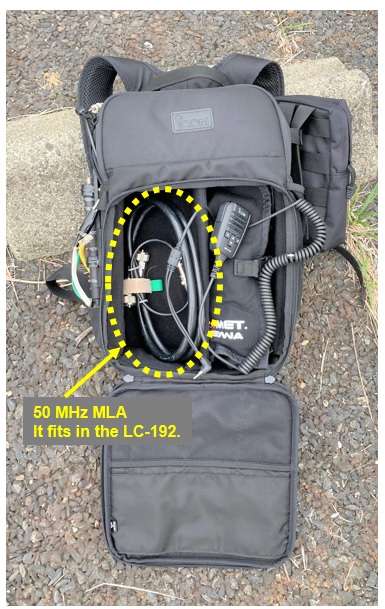 However, I did not experience a pile-up. I was expecting to receive a little pile-up because I transmitted from a location 1000 meters above sea level, but I was disappointed. Even so, the MLA is compact enough to be carried in a backpack, and I thought it would be a perfect antenna for people who enjoy hiking and operating amateur radio outdoors. Then, I decided to make monoband MLA specifically for the 50 MHz band, which I often use when I go outdoors. In this article I will explain the making of this antenna.

Operating principle of an MLA

If you search for MLA on the Internet, you will find many articles and sites that describe the operating principle. As the author I should write about the principle and theory of operation more in detail of antennas, but I am not good at the theory and principle of the MLA. Therefore, I explain the principle a little in this article and I will concentrate on explaining how to make it.

Figure 3 shows the MLA equivalent circuit. The circuit consists of two coils, one on the primary side and the other on the secondary side, like a transformer. Actually, no coil is found in the antenna element, but it is composed of two loops that act as inductance (coil) at high radio frequencies (hereafter called RF). The smaller loop is called the feeding loop on the primary side. The feeding loop inputs the RF energy from the main loop to the radio during receive, and outputs the RF energy from the radio during transmit through the main loop. 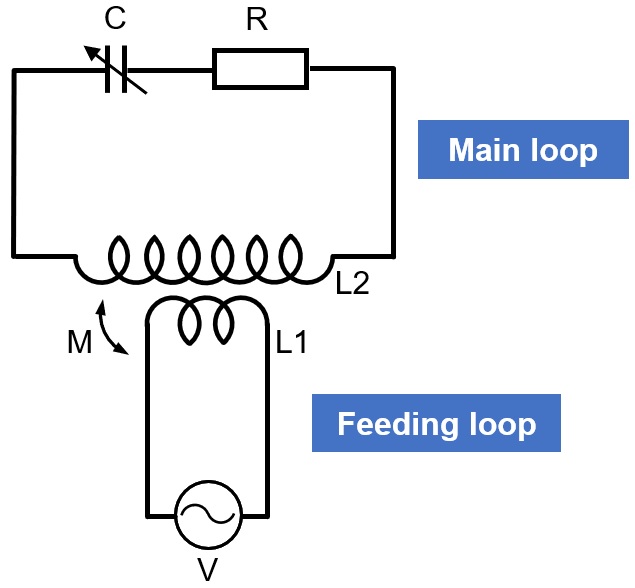 For the two loops (elements), both the feeding loop and the main loop are made with a thick coaxial cable, as shown in Figure 4, and connectors are attached to both ends. Both loops form an RLC resonant circuit. In order to efficiently radiate the signals, the main loop must be a resonant circuit that matches the frequency set on the radio. The principle is that a large current flow through the loop due to resonance, and a magnetic field is generated around the loop. For reference, the resonance frequency of the main loop can be calculated by the following equation. This is the formula I have seen many times in electronic books for radio operators.

The MLA to be made is exclusively for the 50 MHz band. It is important that the antennas made for amateur radio operators like me, who are half hiking and half radio operating, fit in a backpack.

A coaxial cable is used for the loop of the element to reduce the size. Using copper or aluminum pipes can be expected to increase the surface area and bandwidth of the antenna, but considering portability, I decided to not use metal pipes. The coaxial cable that makes the main loop is 8DFB, which is a 50 Ω coaxial cable that is easy to get in Japan. I think RG-8 is very similar to 8DFB. Any coaxial cable can be used for the loop, but I think the thicker the cable may have better performance. Since both the center conductor and the outer conductor of the coaxial cable are used as the antenna element, both conductors are short-circuited in the matching box. This will increase the matching bandwidth. 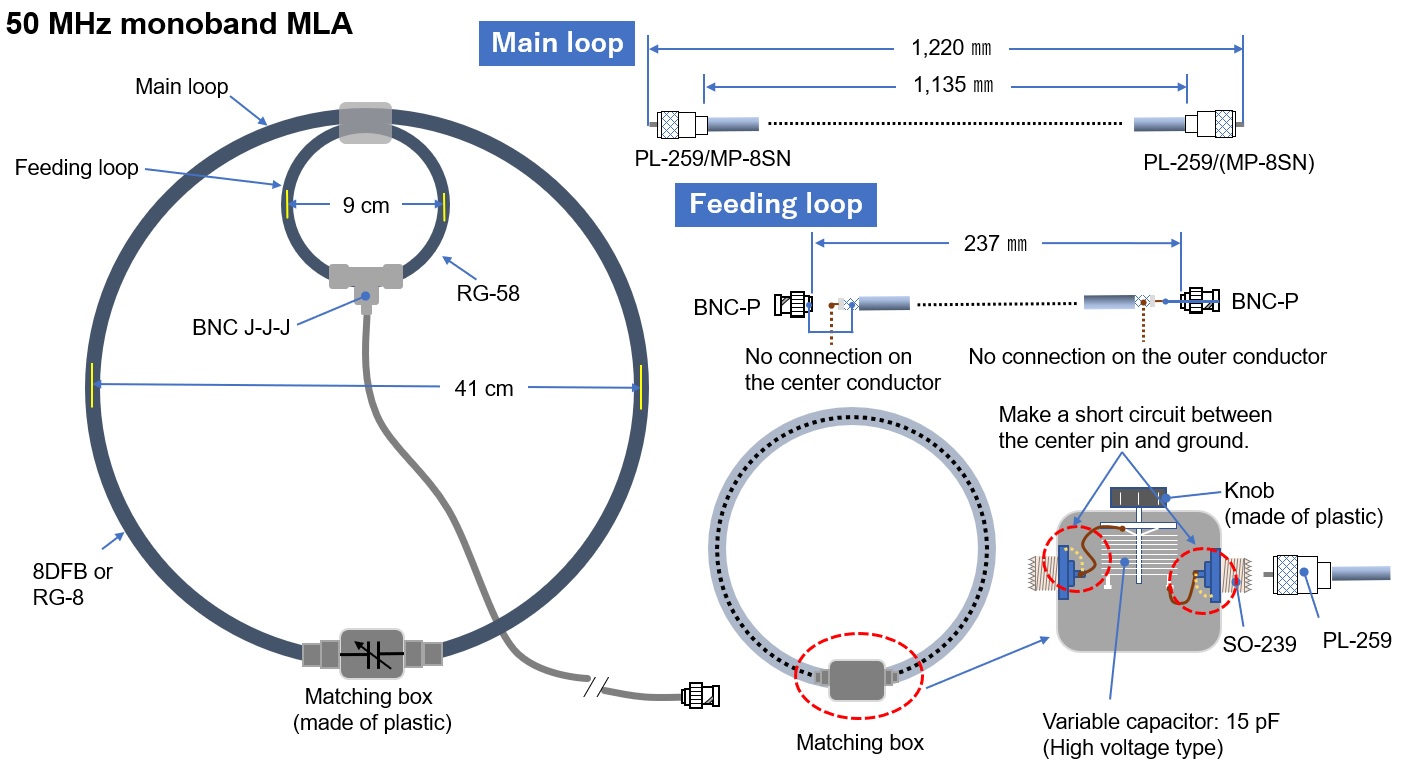 The point here is how to adjust the length of the main loop by cut and try. If the PL-259 UHF connectors attached to both ends are the ordinary coaxial male connectors shown on the left side of Figure 5, once soldered to the coaxial cable, it is almost impossible to remove and reattach. You cannot adjust the length with this connector. Therefore, with the connector shown on the right side of Figure 5, the length of the coaxial cable can be adjusted relatively easily by cutting and trying because the part to be soldered is only the core wire part like a Type-N connector. 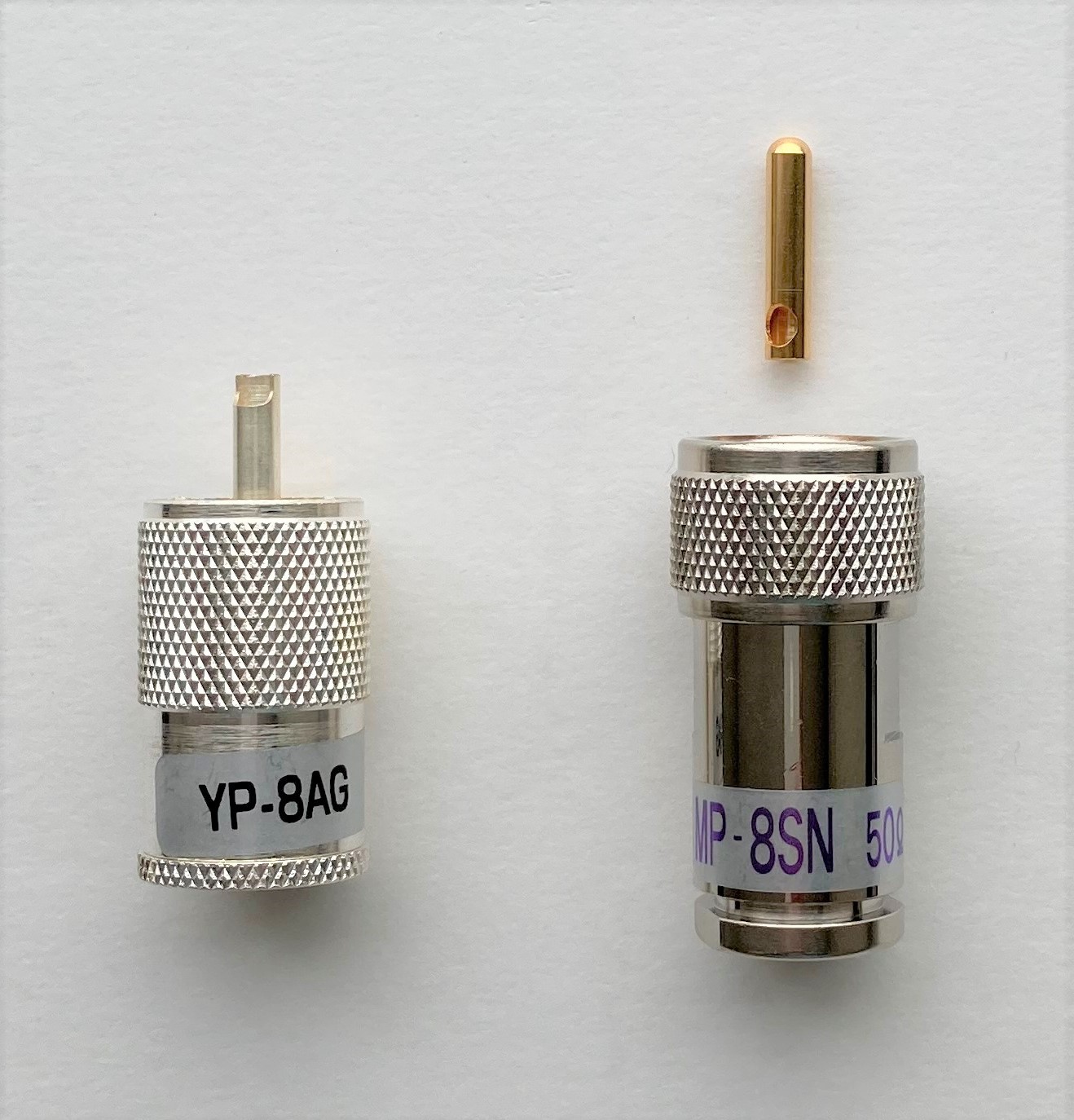 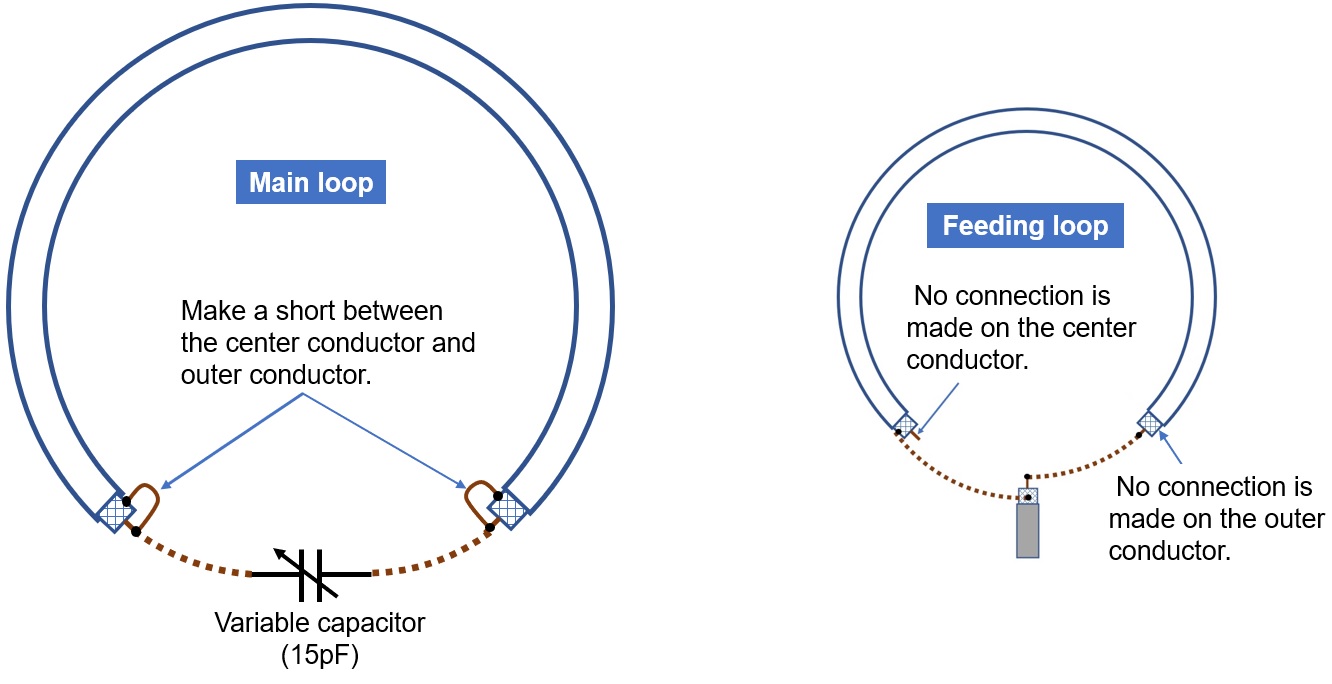 Figure 6. Wiring diagram of the main loop and feeding loop 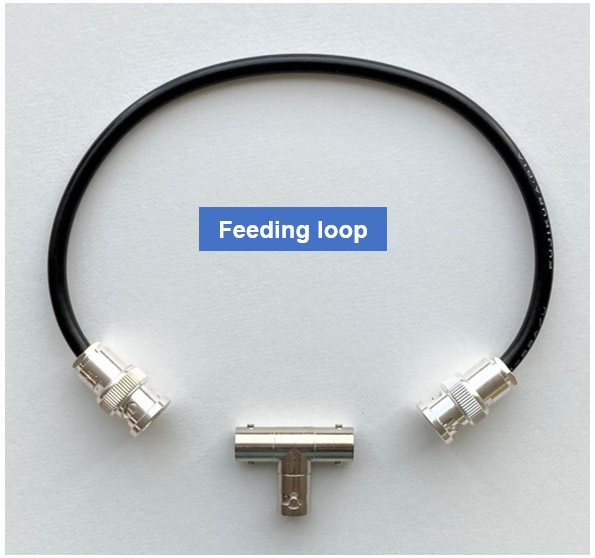 Install a variable capacitor shown in the equivalent circuit in Figure 3 into the matching box. The main loop has two PL-259 UHF connectors on both ends of the loop so that it can be removed from the matching box for greater portability. See Figure 8 for the matching box structure.

Figure 8. Inside the matching box

Attach the main loop to the matching box without attaching the feeding loop. Place the coil of the dip meter inside the main loop, as shown in Figure 9. The loop with a diameter of 40 cm works as an RLC resonance circuit. First, find the resonance point using the dip meter as shown, and slowly rotating the variable capacitor knob.

You can find the dip point (resonance point) by carefully turning the adjustment knob of the dip meter. 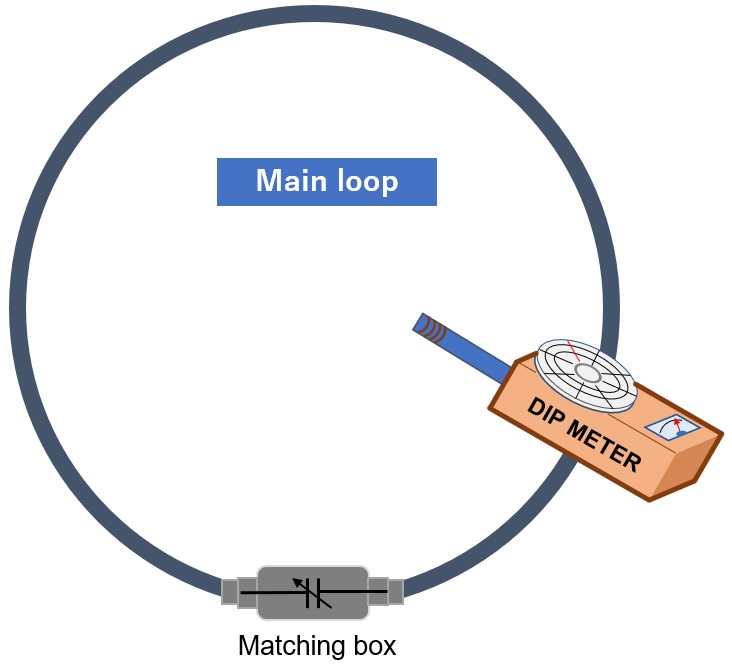 Figure 9. Measure the resonance frequency of the main loop with a dip meter.

If there is a resonance point at a frequency far below 50 MHz, I think that the resonance point cannot be found by adjusting the variable capacitor. In this case, it's a hassle, but you need to shorten the coaxial cable a little. The special type of PL-259 connector shown on the right side of Figure 5 is useful here. 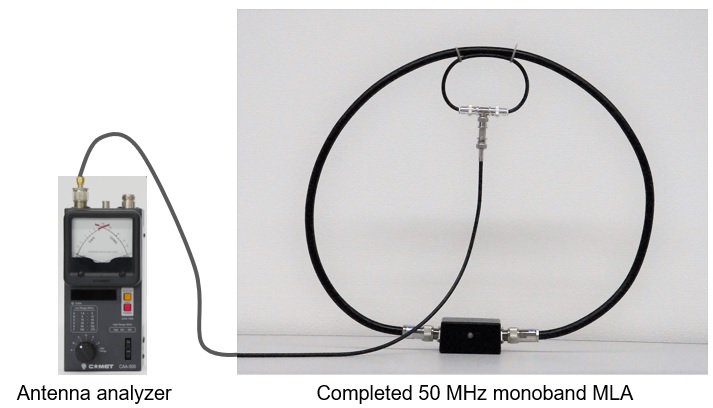 Set the IC-705 to receive on 50 MHz. Turning the variable capacitor on the MLA changes the noise sound level heard from the IC-705 speaker. The maximum noise level is where MLA is approximately matched. Set the IC-705 in the RTTY mode for pinpoint matching and to adjust during transmit. Adjust so that the SWR value can be observed on the display of IC-705. If you turn the variable capacitor slowly while transmitting, there should be a point where the SWR will drop.

As soon as I took the adjusted MLA outdoors, the SWR became 3:1 or more. In order to adjust the SWR, I turn the variable capacitor knob while transmitting with the IC-705 to minimize the SWR value, but even where the SWR was the lowest, if I let go of the tuning knob of the variable capacitor, the SWR deteriorated. I felt that the antenna was greatly affected by the operating frequency, the environment where the antenna is used, and the distance between the human body and the antenna.

I'm not sure if the MLA I made is a good performing antenna because I have not done enough comparative tests yet. So, I have two homework assignments. One is to do comparison testing with other antennas. The other one is to make a similar MLA with a substitute for the hard-to-find variable capacitor.