Power outages may occur during bad weather, or where the power regulation system in the area is not good. For those situations, I built a unit to automatically switch from AC power to DC backup power in the event of a power outage.

Specifications of the unit

Figure 1 shows the circuit diagram of the power supply switching unit. It is assumed that the transceiver has an output power of 50 watts and is powered by 13.8V DC from an AC powered regulated voltage power supply. Even if an unexpected power outage or failure occurs during operation, and the AC power supply shuts down, it automatically switches to the backup power source, for continuous operation for a certain period of time.

Make sure to connect a charged battery as the backup power source. While operating with AC power, it is possible to charge the battery, but gas is also generated when the lead-acid battery is charged. I didn't include this specification because charging indoors is dangerous. When operating with a power of 50 W, depending on the transceiver to be connected, it will draw approximately 15 A at 13.8 V DC. Consideration must be given to the flow of large currents in the parts and wiring used in the circuit.

Figure 1 shows the circuit of the automatic backup switching unit. The circuit incorporates a DC-DC converter that boosts the 12 V voltage of the battery to 13.8 V. I didn't make this by myself, but used a commercial unit.

(1) Q1
2SJ555, P-channel MOSFET is used for switching the power supply. The On-resistance value (RDS) when turned ON is as low as 0.017 Ω, and the maximum the drain current (ID) can flow is up to 60 A. The MOSFET used is not limited to the 2SJ555. What is important is the maximum ID current and the On-resistance. Refer to the previous issue of FB Trivia for MOSFET operation details. 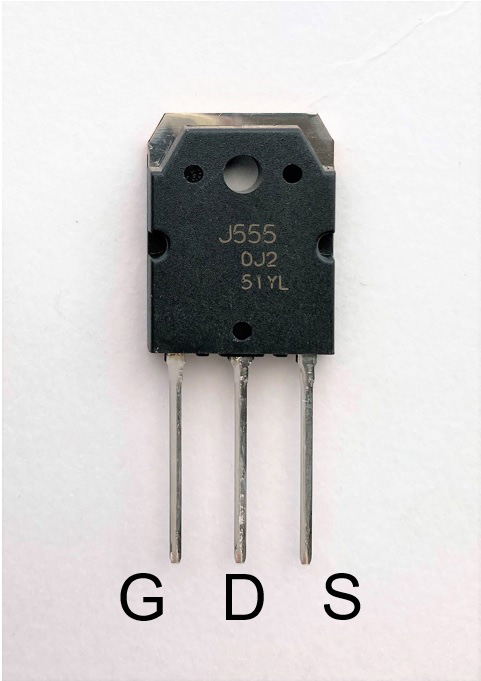 (2) D1、D2、D3、D4
These are diodes for backflow prevention. The circuit uses Schottky barrier diodes, which have a lower forward voltage drop compared to ordinary silicon switching diodes, and reverse recovery when a sudden reverse voltage is applied while a forward current is flowing. For reference, the voltage drop of a general switching diode is about 0.6 to 0.7 V, while that of a Schottky barrier diode is as low as 0.2 to 0.3 V. Diodes I use can handle 30 A according to the specifications, and was purchased from a major online shopping site.

(3) D5、D6
These are light emitting diodes (LED). When operating your radio through an AC power supply, the blue LED lights to indicate you are using the AC/DC power supply as the power source. When operating with the backup power source, the blue/red LEDs alternately blink. The blinking LED has a tiny IC chip internally installed in the LED. A 1.5 kΩ resistor is connected in series to each LED so that a current of about 10 mA flows.

(4) BT1
The best backup battery to use is a 12 V deep cycle type that is resistant to repeated charging and discharging, but I had a 12 V/6 Ah maintenance-free battery at hand, so I used it. When using a large capacity battery such as a lead-acid battery, be sure to first charge it outdoors. Charging indoors can be dangerous because gas is generated from the lead-acid battery during charging. Use a backup battery that meets your needs.

<Caution> For safety, be sure to insert a fuse in the cable used to connect the battery to the unit.

(5) DC-DC converter unit
Since the transceiver input voltage is rated at 13.8 V, the DC-DC converter unit boosts the backup battery voltage from 12 V to 13.8 V. This is not what I build in this article, but it was purchased as a unit from a major mail-order site, and it is stated that the maximum current is 30 A. A cooling fan and heatsink are installed underneath the unit. The fan runs automatically by detecting the unit temperature.

Theory of operation in the switching circuit

I built the circuit on a universal board, and installed it into an aluminum case, together with the DC-DC converter unit. The input terminals that connect the AC power supply and the backup battery are installed on the rear panel of the case. 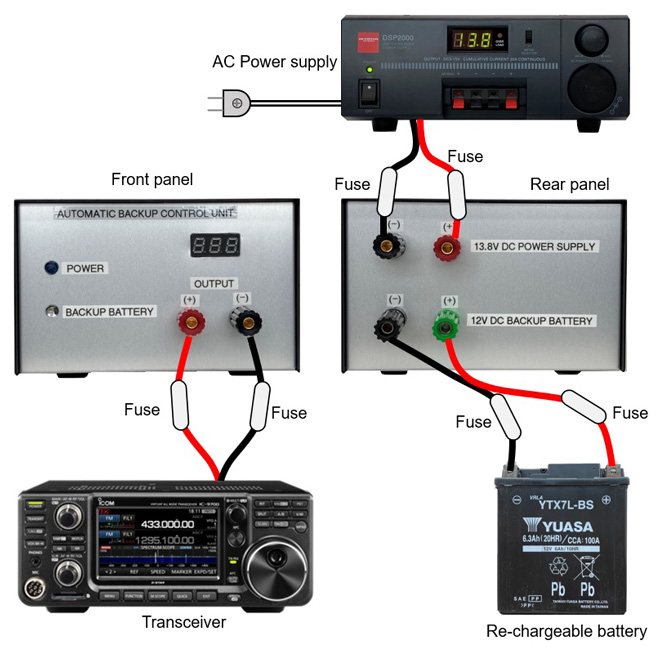 When the AC power supply shuts down and Q1 is turned on, current flows through the DC-DC converter. Then, it gradually heats up and the small fan attached to the DC-DC converter starts automatically. Considering continuous operation, I used an aluminum case with air-ventilation slits to create an air flow inside the case. 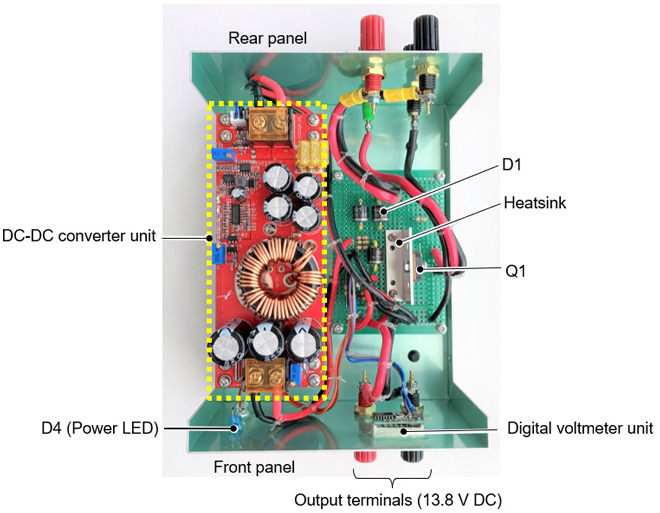 Connect the AC power supply and a charged backup battery to the unit, as shown in Figure 4. Make sure that when the AC power is turned OFF, 13.8 V is output. Since a Schottky barrier diode is inserted in the power supply line in the circuit, the voltage drops by the diode junction voltage. If the DC-DC converter unit you use has an adjustable output adjustment, adjust it to 13.8 V.

Since the purpose of this project was to operate a 50 W transceiver, I used a relatively large capacity MOSFET, Schottky diodes, and DC-DC converter unit. Also, when assembling the parts on the universal board, I used thick wires (1.6 mm) between the parts. It was stated that the On-resistance of the 2SJ555 is as low as 0.017 Ω described in its data sheet, so I didn't install a large heatsink. In the experiment, in SSB/50 W normal operation, the unit was only slightly warm, even after talking for about 5 minutes. However, in FM/50 W operation, it gets quite hot after 1 minute of continuous transmission. I think the small heatsink shown in Figure 5 is not enough, and I recommend installing a larger heatsink.

For the parts used for the unit and the DC-DC converter unit, select them according to the power specifications of the transceiver you intend to use.