This time, I will introduce a simple antenna tuner for QRP operations that can be made with readily available parts.

An antenna tuner is a matching circuit inserted between a radio and an antenna to efficiently transfer the RF (Radio Frequency) signal from the transmitter to the antenna, or from the antenna to the radio.

In particular, in order to efficiently transmit signals from an RF amplifier circuit to the next stage without attenuation, it is important that the output impedance of the amplifier circuit match the input impedance of the side receiving the signal. If matching is not achieved, the signal from the transmitter is not efficiently transferred to the input side of the next stage, such as an antenna, and as a result, reflected waves are generated. As the reflected waves travel back and forth in the circuit, signals that overlap with the original signal are input to the circuit in the next stage, resulting in waveform distortion and causing unwanted radiation.

Figure 1 (left) is a block diagram of an AF (Audio Frequency) amplifier. Efficient power transfer means that the output resistance of the first stage (R1) is equal to the input resistance of the second stage (R2) that receives it. Figure 1 (right) shows a transmitter and antenna. To efficiently transmit the output signal to the antenna, the condition Z1 = Z2 is required, as in the AF amplifier.

In AF amplification circuits, the effect of reactance on the frequency of coils and capacitors does not need to be considered so much because the frequencies handled are low, but this is not the case at RF. Even a small amount of inductance or capacitance on the order of MHz will produce an impedance that cannot be ignored. Therefore, as shown in Figure 2, the antenna tuner works to make the impedance from the transmitter side (Z1) to the antenna side (Z4), as close to the same as possible.

Target specifications for the antenna tuner

The toroidal core used in this project was purchased at an amateur radio flea market. I have no idea of the part number or specifications. Based on my past experience, I thought if I wind the core 40 times, it will result in an inductance of about 30 µH. Later, I measured the inductance with a meter and found it to be 36 µH. There were other toroidal cores that I had purchased at other flea markets, so I chose one at random and made a coil in the same way, which resulted in a coil with a similar inductance.

Figure 5. Making a coil with a toroidal core

For reference, Figure 6 shows the tap positions of coils wound on a toroidal core and their respective inductances measured with a measuring instrument.

Figure 6. Number of turns and inductance of the coil shown in Figure 5 (actual measurements)

I do not know the specifications of the toroidal core used to detect SWR either. The toroidal core had an actual diameter of 10 mm and an inner diameter of 5 mm. This core is wound 10 times with 0.3 mm polyurethane wire. The winding on the toroidal core serves as a transformer rather than a coil. The primary side inputs the RF supplied from the transceiver to the antenna tuner, and the secondary side detects the signal and detects the traveling wave or reflected wave.

(2) Meter
As mentioned above, if you are making a simple antenna tuner, additional circuits for power detection and SWR detection are not necessary. The meter I used was also purchased at a flea market. The specifications were unknown, but when I measured it, I found that it was a small current indicator with a full scale of about 0.1 mA. In addition, the SWR may deteriorate due to the installation of a detection circuit.

Figure 7. A meter used in the detection circuits 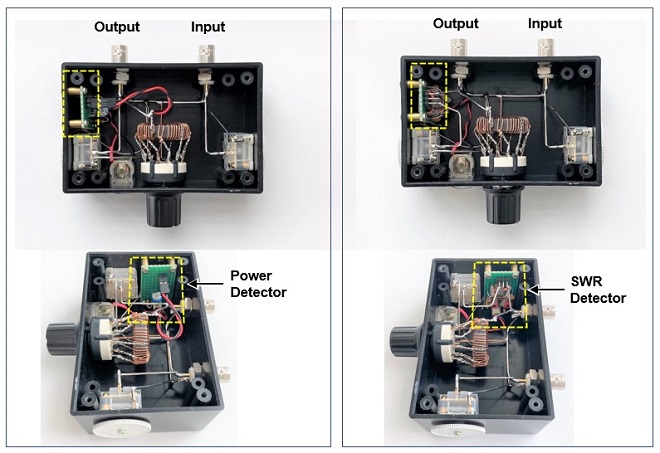 There is nothing in particular to adjust in terms of the circuitry. After confirming the wiring, connect a 50 Ω dummy load through the antenna tuner made for IC-705 as shown in Figure 10.

Set the IC-705 to either FM or RTTY. For the IC-705 meter display, push the [MENU] button on the IC-705 front panel and select "METER" to display the SWR status in advance. Set the frequency to 14 MHz, near the center of the HF band, and the PO meter will swing when the IC-705 is set to transmit. Turn the [Inductor] knob on the front panel of the antenna tuner you have made to minimize the indication of the SWR meter. Once the SWR meter is minimized, turn Tune-2 (variable capacitor on the output side) and adjust it so that the meter indication is minimized. Turn Tune-1 (input side variable capacitor) further so that the meter indication becomes minimum. Since a 50 Ω dummy load is connected, the SWR meter of the IC-705 should not indicate at all. Similarly, check the operation in the frequency range of 7 MHz to 28 MHz.

Figure 10. Checking the operation of the antenna tuner with a 50 Ω dummy load

The next step is to connect the actual antenna and check its operation. The method is the same as for the 50 Ω dummy load.

Adjustment of the Power detection circuit

In the circuit diagram shown in Figure 3, R1 is a 10 kΩ variable resistor. When the antenna tuner is adjusted to maximum power, adjust R1 to set the meter to full scale. If the sensitivity of your meter is less than 0.1mA, the meter may not reach full scale even if R1 is adjusted. In that case, increase the capacitance of C3 a little to increase the meter runout. However, this is the same as picking up of the output, so the transmit power sent to the antenna will be slightly reduced.

Adjustment of the SWR detection circuit

The specifications were set from 7 to 28 MHz for the matching frequency range, but the inductance of the coil wound on the toroidal core was higher than expected and it worked as an antenna tuner even at 3.5 MHz. However, the capacitance of the variable capacitor was insufficient and the SWR was just under 2 at the 3.5 MHz band. The HF high band such as 21 MHz and above were no problem at all. Measurements with NanoVNA showed that matching was possible up to 36 MHz, but not up to 50 MHz.