Can the RHM12 portable antenna be matched with a bicycle body on HF? 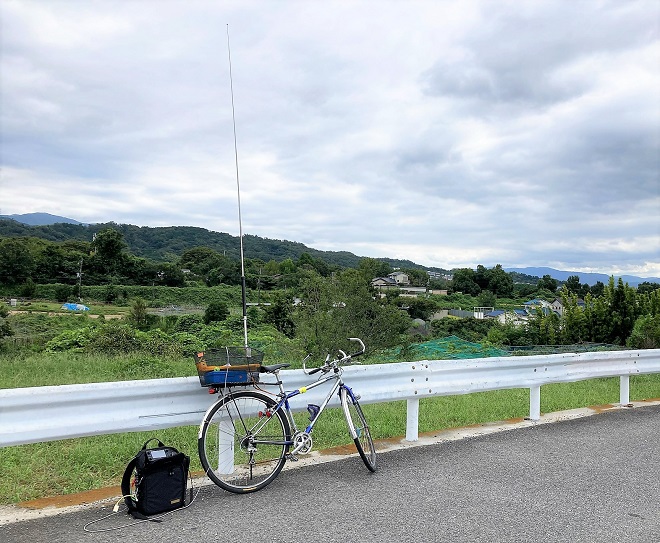 I will try bicycle mobile with the Icom IC-705 and Diamond Antenna's RHM12 in this article.The rig I used is an Icom IC-705 portable radio and the antenna is a Diamond Antenna RHM12. Both are compact, making them ideal for portable operations. Since the rig will be powered by its own battery packs, the maximum power is 5 W. I do not expect to make CQs and receive pileups from many radio stations, but I will be happy if I can make QSOs with them in a reasonable way. I will look at the antenna characteristics after installation.

(1) IC-705
The IC-705 has been available from Icom for about four years now, so it is already widely known. What is surprising about this compact rig is that it can be used in all modes, on all bands from 1.9 to 430 MHz. It produces up to 5 W using the battery pack, and up to 10 W with an external power supply. Until now, compact-body radios have had the disadvantage of being so small that many functions are assigned to a single button, making operation impossible without an instruction manual. The IC-705 was different. It can be operated in much the same way as the company's IC-7300 100 W fixed radio, so it is very easy to use. The UI (User Interface) is well designed. 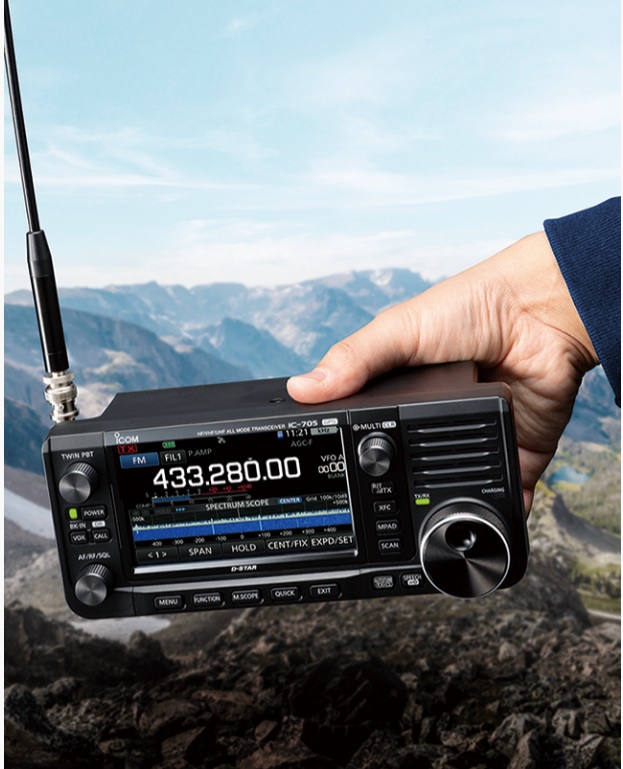 (2) RHM12, Compact portable antenna
Since the Icom IC-705 is a portable radio, I also chose a more portable antenna. The RHM12 is described in the Diamond Antenna company product description as a 7 to 430 MHz portable screwdriver-type antenna. While many roof-mounted HF antennas do not cover the WARC bands, or are optional, this RHM12 covers all amateur bands, including the WARC bands.

In addition, if you purchase the optional RHMC12, it adds coverage of both the 1.9 and 3.5 MHz bands. Even though it is for portable use, the SSB input can be up to 120 W, making it ideal for mobile operation in a car.

RHM12 (top) and its optional RHMC12 (bottom) from Diamond antenna

Making the antenna base mount

My favorite bicycle is called a cross bike. It looks a little awkward, but I have a metal basket installed on the back of the bike to carry my bag for commuting. The RHM12 will be mounted to this basket through the antenna base mount that I will describe next. 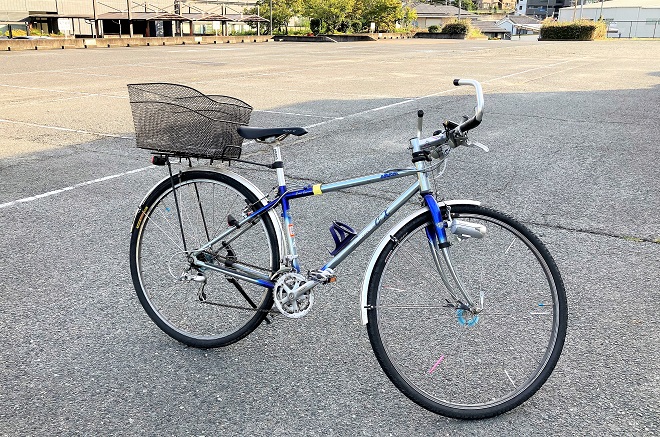 My favorite bicycle: mounting the antenna on the rear basket.

First, I made the base to mount the antenna. I purchased the metal angle and plate shown in ① and ② below at a DIY shop. The material was made of stainless steel to prevent rusting, but it was physically very hard and difficult to drill holes in. The ③ connector is for a UHF female connector and BNC female jack. The RHM12 is attached to the UHF connector side, and the coaxial cable connecting the radio and antenna is connected to the BNC side. Stainless steel screws are used for mounting.

Installation of the antenna base mount

Installation of the RHM12

The RHM12 and optional RHMC12 contain the components listed below. 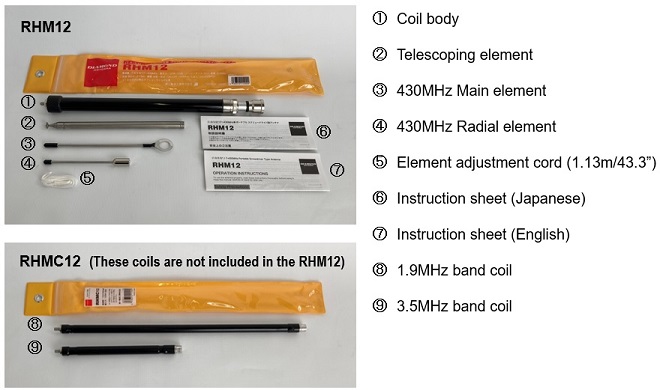 Parts included in RHM12 and RHMC12 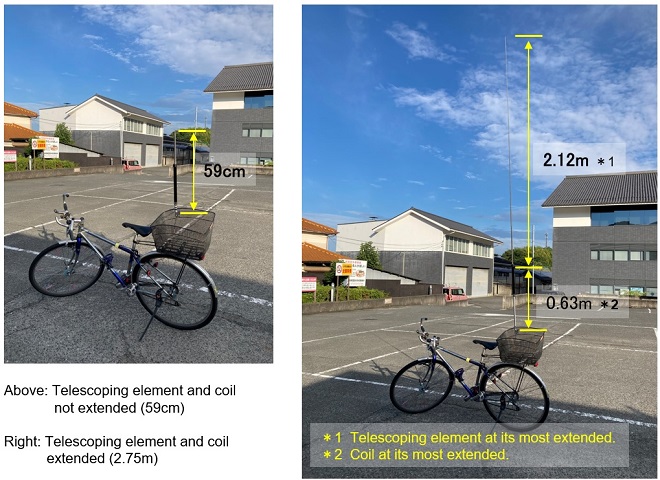 (2) Assembling the antenna for 50 and 144 MHz
The assembly itself is the same as the 7 to 28 MHz assembly described in (1) above, and there is no need to install or remove any other elements. However, since the frequency is higher than that of the HF band, the electrical length of the element is not adjusted by the inductance of the loading coil, but by the length of the telescoping antenna.

(3) Assembling the antenna for 430 MHz
Assembly of the 430 MHz band antenna is also very easy. Simply remove the telescoping antenna installed for the HF band and install a dedicated 430 MHz band element in its place and attach a radial element to the base of the coil. Both are threaded and require no tools for installation. 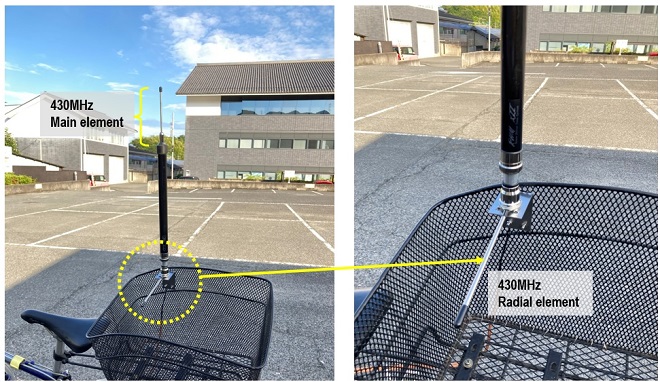 The length of the entire element, including the 430 MHz main element (=13 cm) and the coil (=34 cm), which was replaced with a rod antenna, is about 47 cm. The total length of this element, 47 cm, is approximately 5/8 λ, which theoretically means that it resonates. This antenna is well thought out.

(4) Assembling the antennas for 1.9 MHz and 3.5 MHz
To operate on the 1.9 and 3.5 MHz bands, you need to buy the optional RHMC12, which contains the necessary coils for those bands. Simply attach each coil to the elements between the sliding coil and the telescoping antenna.

Since the physical antenna length of the RHM12 used is much shorter than the wavelength, an additional loading coil such as RHMC12 is inserted into the antenna element. This increases the inductance of the antenna and makes it resonate at the operational frequency.

Adjustment of the RHM12

In my previous portable operations, I had a hard time finding the resonance point, partly because the antenna installation conditions differed each time I moved. I was concerned about this issue, so I brought NanoVNA* with me for the adjustment. I started to adjust from 7 MHz band and worked our way up to the upper frequencies.
*The NanoVNA is a compact, low-cost Vector Network Analyzer.

One of the goals of this experiment is to have a portable operation that looks cool. The instruction manual recommends connecting a counterpoise, but I ignore that and see how far the SWR drops with just the grounding of the bicycle body.

Preparing for the antenna adjustment

To lower the resonance point, the inductance of the coil needed to be increased a little, so I slid the cylinder up a little. When the resonance point was observed again with NanoVNA, it was a little lower, and after repeating this process two or three times, it was within the band and the SWR became about 1.5.

The IC-705 has a function to measure SWR. I confirmed that the NanoVNA is not particularly necessary by using this function.

Adjustment results of the RHM12

The SWR was measured when the RHM12 was not connected to the counterpoise and grounded only to the bicycle body. The SWR for each band is shown below. As mentioned above, the adjustment was made by first finding the approximate resonance point by the received sound, and then using the SWR measurement function of the IC-705, the SWR was driven down to the minimum.

The SWR characteristics below show that the 1.9 and 3.5 MHz bands have an SWR of more than 3, which means that they cannot be used. The SWR of 7 MHz is not good either, but it is about 1.5, and is an acceptable range. The other bands were well below 1.5, which is better than expected.

The 430 MHz band has no adjustment points. When both the main element and radial elements are installed, the SWR was close to 2. It may be acceptable for operations but if it is possible, I would like to keep the SWR below 1.5. When the radial element attached horizontally to the antenna base was angled about 30 degrees below horizontal, the SWR became lower around 1.2 to 1.3 as shown in the screen image. This was not mentioned in the instruction manual, but it seems to be effective. 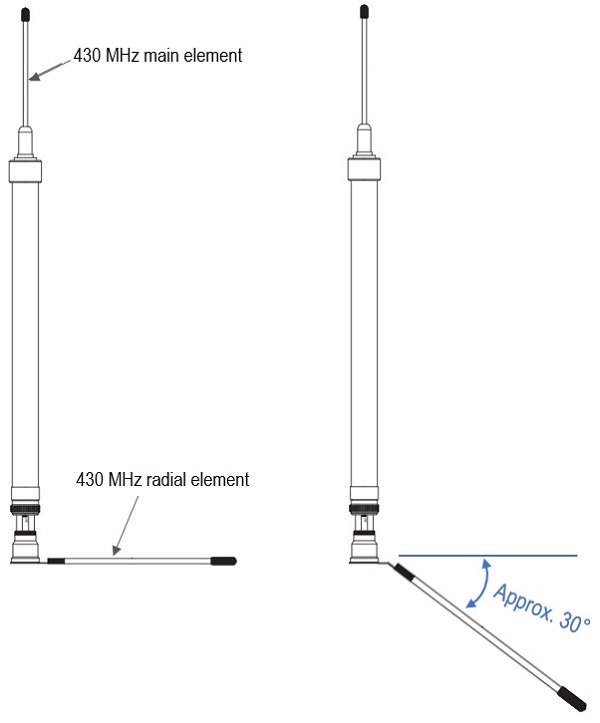 SWR decreased when the radial mounting angle was changed. 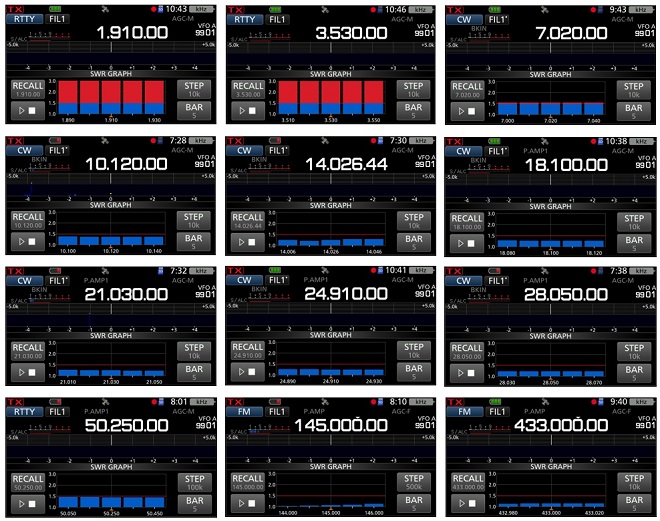 SWR characteristics of each band without counterpoise

Additional experiments for reducing SWR on the 1.9 and 3.5 MHz bands

I came up with one idea regarding the SWR drop on the 1.9 and 3.5 MHz bands, and so I immediately conducted an experiment. The results show that the bandwidth is very narrow, but the SWR is less than 1.5.

I explained that grounding only the bicycle body resulted in an SWR of more than 3 at both 1.9 and 3.5 MHz bands, as mentioned above. The ground plane was insufficient. The usual method is to compensate for the lack of grounding by counterpoising, but as shown in the photo below, I connected the bicycle body to a nearby road guardrail with a booster cable used to charge a car battery. The result was a perfect SWR reduction. 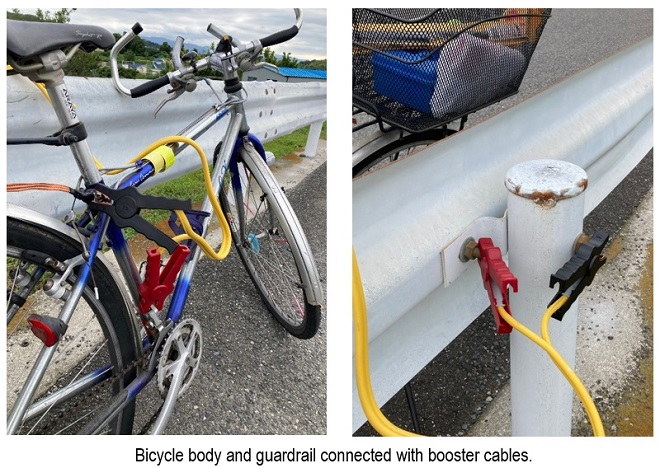 As you can see from the IC-705 screen capture shown below, the SWR characteristics were about 20 kHz bandwidth at 1.9 MHz and about 40 kHz at 3.5 MHz. This is sufficient because the frequency range of these bands is not very wide.

Actual operation with the RHM12 and IC-705

After adjusting the antenna, I moved to a slightly elevated open space to have real operations on each band. Although a low SWR antenna does not guarantee a good signal, I started watching on the 7 MHz CW band, and was looking for stations that were making CQs and calling them. Unfortunately, I could not beat the pileups of many strong stations and was a helpless state. Still, after several persistent calls, stations picked me up.

Next, I decided to make CQs around 7.015 MHz. After a few CQs, a station called me. After that QSO, it did not continue one after the other, and there were only a few one-time responses. I was able to confirm that the signal was definitely radiated, and the 10 MHz band was similar.

I found it reached well on 50 MHz, 144 MHz and 430 MHz, surprisingly. The received signal was strong and not in a pileup, but when I called a station that I could hear, I got a response almost instantly. I think the antenna on these bands is more efficient because it is not shortened with the loading coil.

It was 33 degrees Celsius outside, the sun was shining, and it was 3 p.m. I tried to make CQs on CW on 1.9 and 3.5 MHz bands. Unfortunately, no one responded. I am sure that the signal was radiated, but I think it is because these bands become active after sunset and many people were not even watching. I will try to operate them another time.

I have tried various portable antennas in the past, but could not find a resonance point, and had a bitter experience of bringing an antenna analyzer with me even though it was a portable operation.

I wrote this installation article focusing on the bicycle mobile. As I found out after installation, it is as easy to install as a VHF or UHF mobile antenna if you have a fitting to mount it on the trunk or roof of your car. However, even though it is designed for a portable antenna, and it is quite long when extended, so it must be removed while the car is in motion to prevent accidents due to the antenna falling off.

The "Precautions for use" in the RHM12 instruction sheet is pasted below as is for your reference.