Making a sound machine say “Good morning. Thank you for everything.”

In Japan, night falls much earlier in mid-April. Even so, it is still dark at 4:30 AM in the morning. But when I go out to pick up a newspaper at this time, it has already been delivered, even on cold and rainy winter days. I can only be grateful to those who deliver it. So, I made a "Thank you for everything" sound machine using a sound module with a record/playback function that I had been saving for a CQ voice device. This sound machine detects the sound of newspapers being dropped into a mailbox, and automatically says, "Good morning. Thank you for everything" with a pre-recorded voice from the speaker, and also turns ON a spotlight in the mailbox.

Although this sound machine does not play a direct role in our daily operation of amateur radio, the circuits used in the device are useful for your electronic projects.

Specifications for the sound machine

Basically, it is a device that allows pre-recorded voices to be heard from a speaker to those who deliver newspapers before dawn.

<Basic specifications>
a) The device operates on dry cell batteries (4 x AAA batteries: 6 V).
b) Energy-saving design that operates only in the dark.
c) The voice to be recorded can be freely rerecorded.
d) Detects a sound when the newspaper is dropped in the mailbox.
e) Pre-recorded sound is emitted from the speaker.
f) Inside of the mailbox illuminated with a mini flashlight.

The seven circuits from (1) to (7) shown below are largely combined to produce this device. The overall circuit diagram combining the circuits of each block is shown in Figure 3. 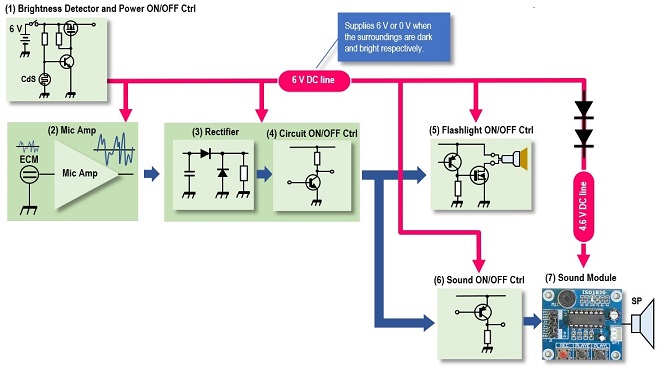 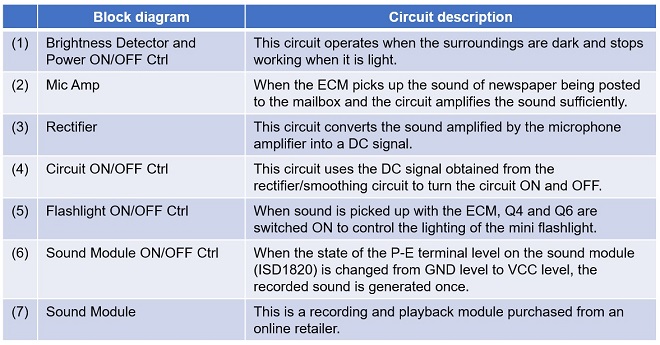 Figure 2. Description of each block

The overall schematic diagram of the completed sound machine is shown in Figure 3.

Description of each block

(1) Brightness detector and power ON/OFF control circuit
This circuit is not necessary if you want all-day operation. This circuit is equipped with CdS cell (R2), which detects ambient brightness and supplies power to each circuit only when the ambient is dark. When the ambient light becomes brighter during the day, the circuit stops operating because the daily life noise increases, and the device may malfunction with the noises or sounds. A CdS which detects the ambient light, is a kind of photoconductive element mainly composed of cadmium sulfide, whose resistance value changes, depending on the amount of light hitting the surface of the component (photosensitive area). The resistance of the CdS is very high (several MΩ) when the ambient are dark and drops to several kΩ when the ambient become brighter. This is used to operate the sound machine in the dark and turn it off when the ambient light becomes bright.

Here the resistance of the CdS is calculated as 10 kΩ when the ambient light is bright. When Q2 turns ON, VBE = 0.7 V. Since VBE = V2, R1 can be obtained by substituting numerical values into the above equation, as follows. 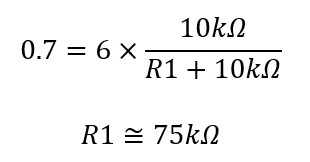 Based on the above calculation, when the ambient light becomes dark, and the resistance of R2 becomes 10 kΩ or higher, the voltage at the intersection of R1 and R2 becomes 0.7 V and Q2 turns ON.

Q1 is a P-channel MOSFET, and the gate voltage goes to GND level when Q2 turns ON, and Q1 also turns ON, outputting 6 V from its drain. When the ambient light becomes bright enough to illuminate the CdS, its resistance decreases and the base voltage of Q2 falls below 0.7 V, Q2 turns OFF, Q1 also turns OFF, 6 V is cut off, and the circuit operation is stopped.

(2) Microphone amplifier
A condenser microphone (ECM) picks up the sound of newspapers being dropped into a mailbox and converts the sound into a DC signal to control each circuit. It is also interesting to use, for example, a motion sensor instead of sound. I will try again another time.

The ECM is not specifically named on the schematic diagram, but a general-purpose ECM should work without any problem. In this circuit, the voltage is applied through R4. The microphone amplifier uses the familiar LM386 Low-voltage audio power amplifier. The gain of the LM386 can be switched by a component connected to pins 1 and 8. In this device, as shown in Figure 5, the gain can be switched between 50x and 200x as needed.

(3) Rectification and smoothing circuit
The sound picked up by the ECM is amplified by the LM386, and the amplified AC signal is rectified by D3 to DC. The diode is a 1N60 germanium diode with a low junction voltage to allow rectification of as weak a signal as possible. A silicon diode used for normal switching can also be used, but with slightly lower sensitivity. The 330 µF of C7 acts as a smoothing circuit to convert the rectified diode signal into DC with as little difference in amplitude as possible.

(4) Circuit ON/OFF control circuit
After the sound is picked up by the ECM and the output of IC1 is converted signals from AC to DC with D3, the DC voltage is applied to the base of Q3 to turn Q3 ON.

(5) Mini flashlight ON/OFF control circuit
This circuit can be omitted if the mini flashlight is not needed. When Q3 is turned ON by sound detection, the collector of Q3 goes to GND level, and since Q4 is a PNP transistor, it turns ON as well when the base of Q4 goes to GND through D5. Q6 does not need to be a MOSFET, a bipolar transistor can be substituted. 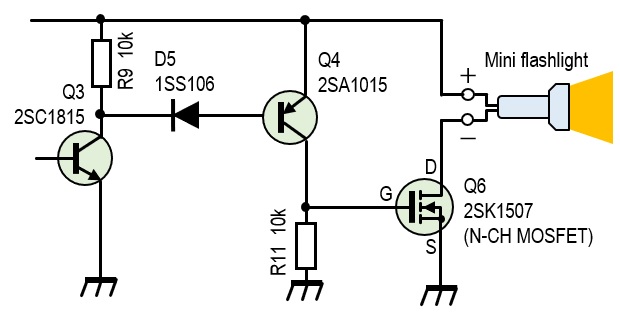 (6) Sound module vocalization ON/OFF circuit
This vocalization control circuit is basically the same as the mini flashlight ON/OFF control circuit shown in Figure 6. When Q3 is turned ON by sound detection, Q5 is turned ON, producing a voltage close to VCC at both ends of R10 inserted between the collector of Q5 and GND. By applying this voltage to the P-E terminal of the sound module, the state of the P-E terminal changes from L to H, and the sound module will vocalize the recorded voice once.

(7) Sound module
The key component is this sound module, which was purchased with the intention of using it to build a CQ machine. 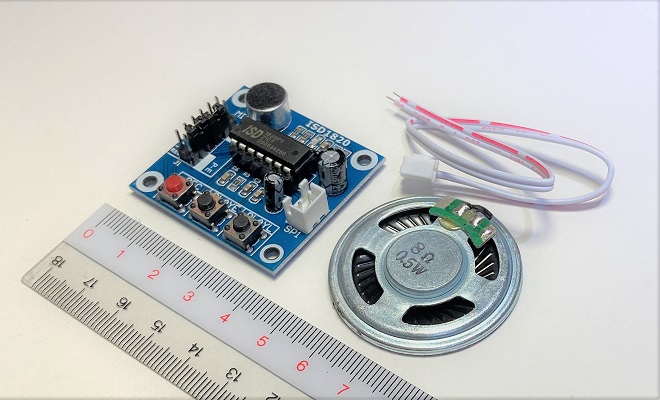 It is quite costly to try making this module by yourself. It is surprising that one module can be purchased on major mail-order sites for as little as 2 US dollars. The module contains a non-volatile memory IC and a condenser microphone (ECM) for voice recording. It also comes with a speaker, so all you need to do is connect the power supply for 3 to 5 V. The module can record audio for 10 seconds. The module does not come with an instruction manual, but you can search the Internet for ISD1820 which will give you some hits.

The module measures 38 mm x 42.4 mm and weighs 12 g. The function of each button switch on the module is shown below.

[REC] button: While holding down, speak into the ECM to record for up to 10 seconds.
[PLAYE] button: Pushes once to play the recorded sound once.
[PLAYL] button: Plays back the recording for as long as you hold it down.

This module has I/O terminals that can be controlled externally, such as with an Arduino. The pre-recorded sound is played back once by changing the state of the P-E terminal from "L" to "H." This state change is performed by turning Q6 ON and OFF. 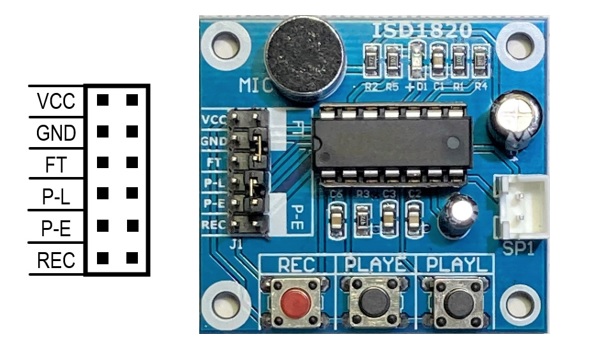 Appearance of the sound machine

Figure 9. Appearance of the sound machine

The ECM and mini flashlight are externally mounted, and the ECM is covered with thick heat-shrink tube to increase its strength. The mini flashlight was made by modifying a give-away flashlight that I got as a promotional item from Icom at a previous amateur radio exhibition. Both have a 50 cm cable with a 3.5 mm speaker plug installed. 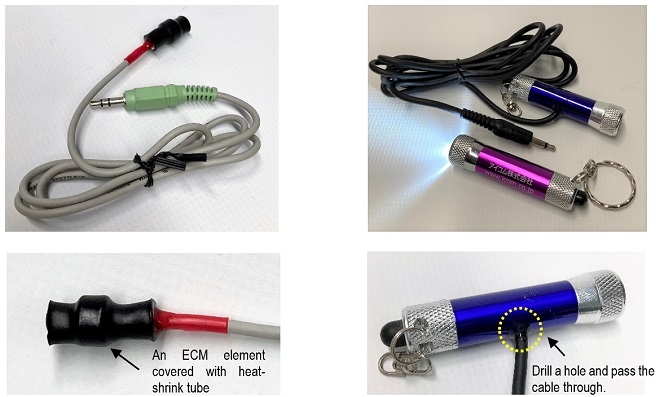 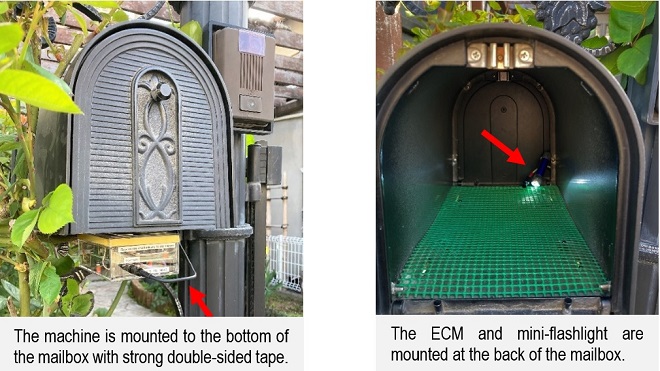 Adjust R5 so that the device works reliably with a sound when the mailbox cover is opened because the device may work by picking up ambient sounds, even if no one opens the mailbox. If the sensitivity is poor, switch SW2 to GAIN = 200.