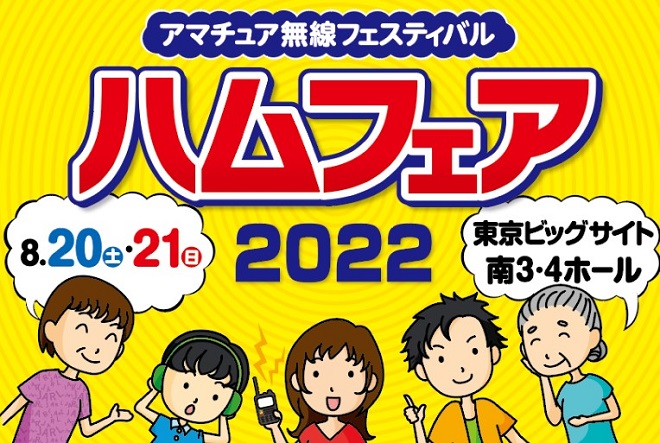 Over the past 3 years, COVID-19 has caused the delay and cancellation of many HAM conventions to curb the spread of infection. As the severity of the disease seems to have subsided over time, together with an increase number of the people getting vaccinated, different countries have already begun to ease their restrictions. JARL had to cancel their Tokyo Ham Fair for 2 consecutive years in 2020 and 2021, but finally managed to get the all-clear to organise the largest Ham Fair in Asia once again in 2022 to the delight of everybody.

Following our travel to Friedrichshafen Ham Fair on 24th–26th June 2022 in Germany, our team consisting of Bun E25KAE, JC E2ØNKB, and Champ E21EIC planned to travel to Japan to attend the JARL Ham Fair 2022 between 17th and 26th August 2022. The Foundation for Global Children (FGC)/SEISA Group founded by Zorro Miyazawa, JH1AJT (SK) kindly extended their support by helping to organise business visas for us at a time when Japan’s border control remained very strict, and we would like to give special thanks to Yosuke Ishii and Hiroaki Ishida for their kind assistance.

We departed Bangkok on ANA flight NH-808 bound for Narita and had to submit a negative RT-PCR test before arrival via the Japanese government SOS app. The process of getting screened through COVID-19 procedures and making it pass the custom took approximately 2 hours.

Upon our arrival to Japan, we noticed straight away that COVID-19 still had some impact on the locals, notably the cancellation of many airport buses routes, the increase waiting time between difference buses and trains, and the closure of many shops at the airport which were all very understandable given that the country was pretty much closed to foreign visitors. 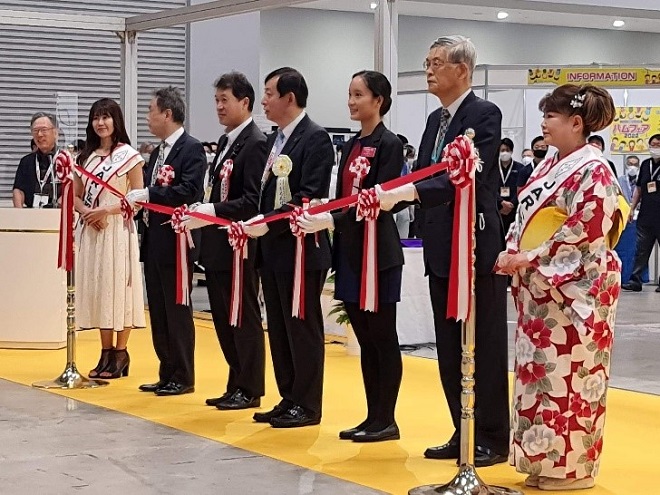 In addition to reuniting with friends and being submerged in the wonderful world of Japanese arts and culture, one of our main objectives for this year’s visit was to set up a WRTC2022 booth together with other JA contesters including Jun JH4RHF, Saty JE1JKL(9M6NA), Don JH5GHM, Taro JA1BJI, and Yosuke JJ1DQR in order to raise monetary funds to support the World Radiosport Team Championship (WRTC) 2022 that is due to take place in Bologna, Italy, in July 2023. Two Thai HAMs who reside in Japan also helped us with the booth : Tong E22YHG and HS5JRH. We would like to thank JARL for generously providing us with the booth space, particularly Ken san JA1CJP. On this occasion, the organiser of the JARL Ham Fair 2022 also invited Ms Nattnee Bun Vichitcheep, E25KAE, who was the Chairman of the 18th IARU Region 3 Conference, to be the honorary guest and cut the ribbon at the opening ceremony. 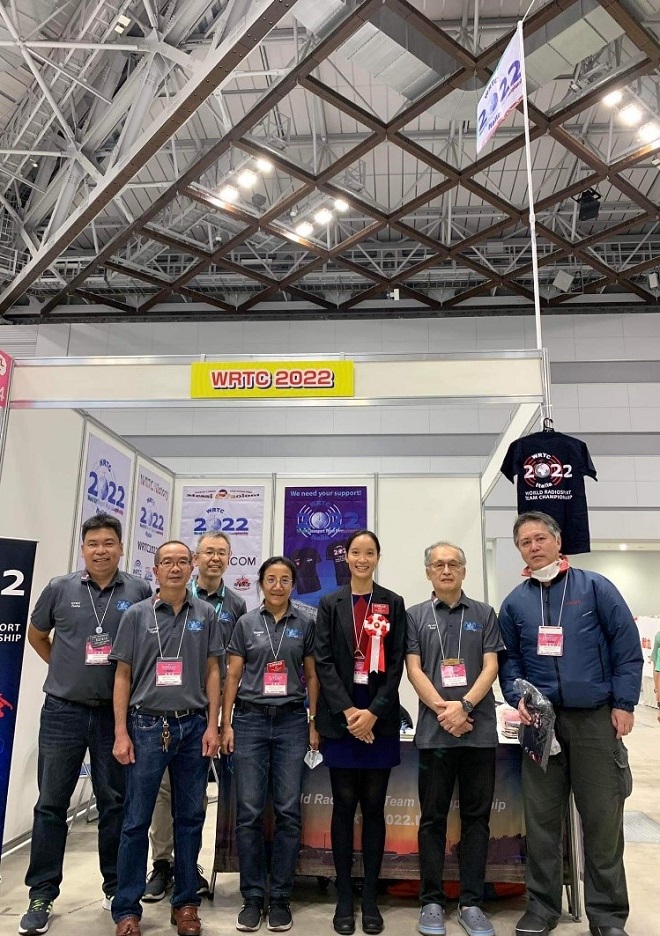 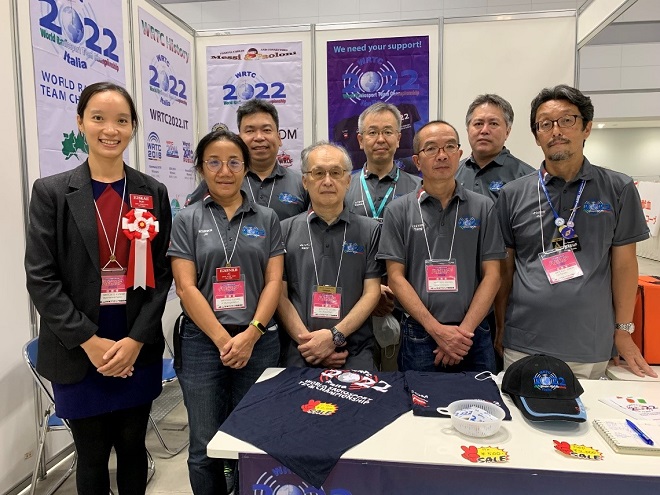 Compounded by COVID-19 where the number of new cases in the country was surpassing 200k per day and the inability of foreign visitors to join the fair due to strict border measures, it was not surprising to see that this year’s fair was much smaller than the past. However, the warmth we received from meeting old friends again after 3 long years and only being able to contact each other via the radio was magical and more than made up for it.

There were many interesting booths at JARL Ham Fair but I would like to give special importance to FGC booth which held a memorial for Zorro Miyazawa, JH1AJT (SK), an incredibly inspiring individual who I had come to love and respect through our 10 years of working together. The passing of Zorro san also took with it what used to be the highlights of JARL Ham Fair, at least to me, which included the Japan International DX Meeting (JIDXM) and DX Forum, as well as the invitation that extend to many world-renowned DXers to join the Fair in Japan.

Figure 7 FGC/SEISA booth laid a tribute to Zorro Miyazawa, JH1AJT (SK) with books and photographs to show the legacy he left behind in the world of amateur radio world and beyond. (L-R) JC E2ØNKB, Champ E21EIC, Hiraaki Ishida, Bun E25KAE, and Yosuke Ishii.

The ICOM booth took the opportunity to introduce the new IC-905 (144MHz – 10GHz) transceiver and IC-PW2 to the world. Whilst our WRTC booth presented the history of WRTC to the passing crowds, gave everyone the opportunity to meet top JA contesters in the country, and raise some funds through donations and the selling of T-shirts, mugs, pins, bags and caps as souvenirs.

After the JARL Ham Fair, we spent 2 days in Tachikawa to activate our first ever Parks-on-the-Air (POTA) from Japan with Yosuke JJ1DQR and Hiro JS1WWR. We drove for 1h45mins from Tachikawa to Lake Okutama Hotori Park (JA-1828) which actually forms part of the Chichibu-Tama-Kai National Park (JA-0014). Hiro san JS1WWR has his POTA operation set up as a mobile station from his car, all equipped with IC-7300, laptop, headset, CW paddles, power generator, DC battery, numerous amounts of ferrites, and lots of homebrew antennas including multiple telescoping vertical ground planes for different bands and a 15m Delta loop. The set-up time was incredibly fast. 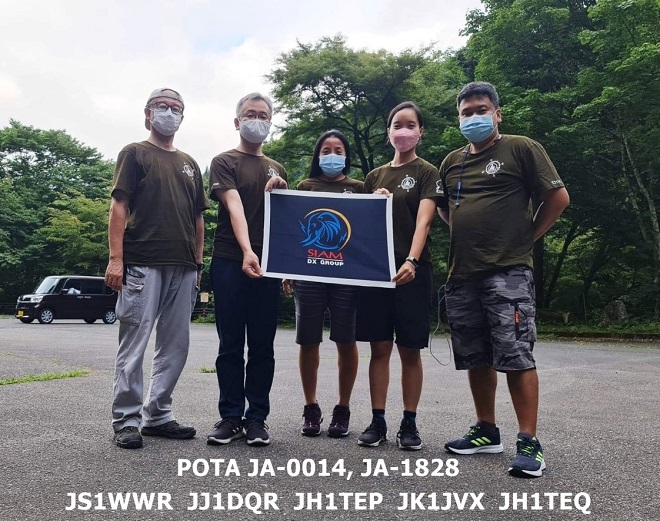 We were on air within 10mins after arrival. Champ E21EIC and Bun E25KAE took turns operating both CW and SSB. We were there for almost 2.5 hours between 0500 and 0730z, and made 66 QSOs in total – all with JA stations. All of us had a wonderful time travelling through the scenic route, and enjoyed ourselves being out in the open air with lush evergreen trees all around operating the HF radio with friends. Thank you Yosuke and Hiro san! We look forward to carrying on this POTA journey once we return to Thailand.

On the second day, we were lucky enough to visit JQ1BVI contest station in Hachioji and were welcomed by Hiro JA1WSX and Gaku JQ1BVI. The four towers at 22mH stood looming above us as we entered the shack which can brave the hot and cold conditions of Japan. Along with all the stations set-up for multi-operators contests, the shack also has a small cosy sleeping corner for any contesters who needs a quick nap during the 48hr competition. Champ E21EIC operated on CW whilst Bun E25KAE worked on SSB. The two of us managed to make around 50 QSOs on 15m and 20m. We logged a few JA stations, and many HS hams from homeland. It was a great experience and a memorable end to our ham radio journey in Japan. 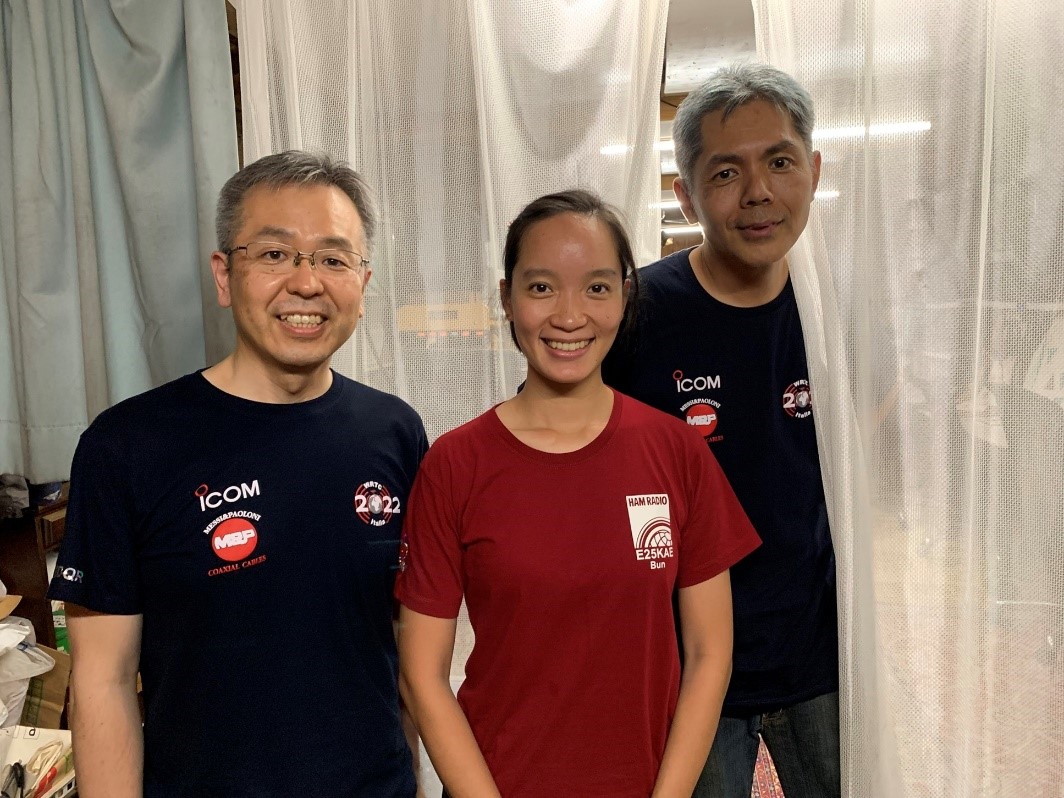 We spent the remaining two days doing some last-minute shopping in Akihabara for radio gears and Viva Home Toyosu for small tools for DIY projects before heading back to Bangkok on flight TG677. Japan will always have a place in hearts and we hope to be back there again for JARL Ham Fair 2023. Special thanks to Yosuke JJ1DQR for taking care of us. 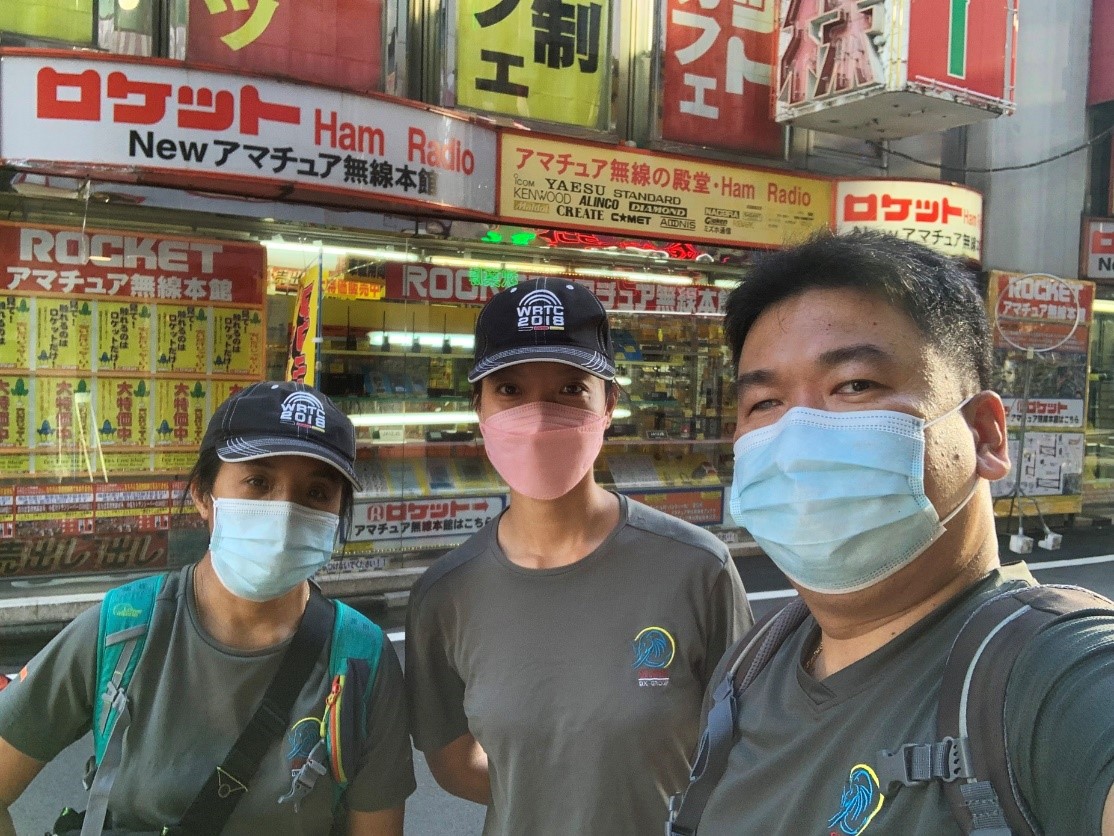