From the IOTA perspective, Thailand is surrounded by six IOTA groups of islands. The Malay Peninsula South East group under AS-145 is the rarest archipelago in Thailand. Even though it is not far from the mainland, they are uninhabited islands with no infrastructure, quite difficult to reach and is regarded as one of the hardest islands to operate ham radio from. IOTA AS-145 consists of Nu, Maeo and Kra Islands which are located the southern-eastern part of Thailand (Gulf of Thailand), stretching from Nakhon Si Thammarat to Narathiwat province which borders with Malaysia.

Figure 1. The QSL card for the first historical activation of AS-145 by E29DX DXpedition team from Nu Island in April 2000.

Figure 2. IOTA DXpedition of the Year Trophy awarded to E29DX for their activation of AS-145

The author’s first activation of AS-145 actually took place over 22 years ago in the year 2000. Back then, the IOTA group number for Malay Peninsula South East group was not even assigned yet, and this first activation was done under the callsign E29DX from Nu Island in order to get the motion going. Mr. Roger Balister G3KMA, who was the IOTA Manager at the time, managed to contact E29DX via CW with the following message for the crew “IOTA AS-145 AS-145 AS-145” to officially acknowledge Malay Peninsula South East group of islands, and thus confirming “AS-145” as the last IOTA number to be assigned to Thailand to the delight of all the crew members. That particular DXpedition by E29DX was actually awarded the IOTA DXpedition of the Year Award from RSGB IOTA program for their effort.

Figure 3. (Left) From L-R Champ E21EIC, Noi HS3NBR, Boy HS8GLR at the final meeting over dinner on the mainland the night before the activation is due to take place.
(Right) From L-R Boy HS8GLR, Noi HS3NBR, and Champ E21EIC enjoying a big Dim-Sum breakfast at the most famous restaurant in Hat Yai called Chok Dee Tae Team before setting off on a boat to Maeo Island on 16th September 2022.

For this DXpedition, their group was to meet up in Hat Yai district, Songkla province, on 15th September 2022. Noi HS3NBR drove from Bangkok with all the radio gears, whereas Champ E21EIC took the flight operated by Bangkok Airways (PG433) out of Bangkok over a distance of 945 km, and reaching Hat Yai 1.5 hours later. After arriving in Hat Yai, Noi HS3NBR and Champ E21EIC went to pick up a 7500 W power generator kindly sponsored by Tanakit HS9JZL, and met up with Boy HS8GLR in the evening over dinner to finalize the activation plan for AS-145 before the team set off the following morning for Maeo Island.

On 16th September 2022, the team met up with “Abang Yor” a close acquaintance of Noi HS3NBR and a local fisherman in Singhanakhon, Songkhla province at 9 am local time. After loading all the radio equipment, antennas, food, drinks, and petrol for the power generator boarded the boat, the team together with Abang Yor headed out to sea towards Maeo Island that is 4 km away.

Figure 5. The boat ride to Maeo Island by HS3NBR/p with a local fisherman “Abang Yor”

The journey took only 30 minutes in moderate winds. Both Nu and Maeo Islands are located directly across from Samila Beach, at the bay in front of Songkhla province. This island is not inhabited by anyone and is solely used by local fishermen to shield from the storm if needed. The entrance to Maeo Island is particularly tricky and all boats must navigate with care because of sharp boulders. Because of this, fishermen will not enter this island after sunset – at least well-meaning ones – and pirates are not unheard of.

Figure 6. (Left) Map of Maeo Island in the Gulf of Thailand, East of Songkhla province
(Right) Location of HS3NBR/p operation on Maeo Island

Maeo Island is 3.2 Hectares in size with high hills and steep slope. Most of the island is covered with dry evergreen forests, and the highest peak is 30 meters above sea level. The water surrounding the island is 3-5 meter deep with corals and the coastline is rocky with small caves.

Figure 7. The journey via boat to Maeo Island (AS-145) with Noi HS3NBR in black, Boy HS8GLR in white, and Champ E21EIC and blue.

The north coast is characterized by steep rocky cliffs, and at low tide, a 10-meter-long beach appears. The south coast has a stone beach and rocks with a small cave called Larn Hin Kunpol Muang Prasart which translates to “The Castle's Stone Yard.”.

The coast on the east side of the island also has steep rocky cliffs. The team decided to set up their operation on the west side of the island, a rocky beach that extends to 20 meter in length during low tide. This area is also home to Indo-Pacific humpbacked dolphin.

Figure 9. (Left) Installation of 40 meter band GP antenna
(Right) Champ E21EIC operating FT8 on 20 meter band while other antennas are being set up.

Figure 11. The activation of Maeo Island (AS-145) continued throughout the night by Noi HS3NBR, Boy HS8GLR, and Champ E21EIC

From then on, the team continued to activate AS-145 without any breaks and with 2-3 stations running side-by-side. They made use of Band Pass Filters for 200 W specifically designed by Pornsak HS4ZQ for this operation. The propagation was fairly good during the entire time but the team did have a slight set back from tropical thunderstorms which often hit in the afternoon and after sunset, coupled with some rainfall surrounding the island.

During daytime, the high bands were particularly good in the direction of JA and EU. And, between nightfall until dawn, the team received strong signals from the EU at different intervals and some NA. On the whole, the team had very few contacts NA and SA stations but this could be attributed to less-than-ideal location and only 100 W power output.

Figure 12. Morning view of the HS3NBR/p operation site on Maeo Island (AS-145)

The team continued their activation until 19th September 2022 and made the last contact with JH1XXB on the 17 meter band CW at 0042UTC. The three operators packed everything up, left nothing behind, and returned safely to shore on the mainland with all the equipment undamaged and accounted for.

The power generator worked flawlessly during the entire activation, and overall, the HS3NBR/p operation from Maeo Island was a success. The team recorded a total of 2,152 QSOs for IOTA AS-145 and POTA HS-0293 under 56 hours of activation. The QSO breakdown across different modes and bands were as follows: 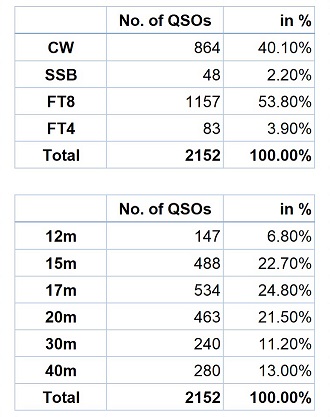 HS3NBR/p would like to thank everybody for their QSOs and especially with their JA friends who contributed over 30.5 % to the logs. Special highlights go to the following JA individuals who have made the effort to contact HS3NBR/p on three or more different modes or bands: 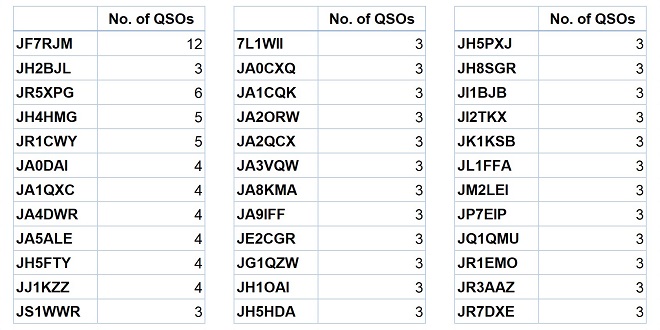 Figure 18. JA stations who have contacted HS3NBR/p during Maeo Island IOTA AS-145 activation on 16th – 19th September 2022 on 3 different modes or bands

For QSL cards, please kindly contact HS3NBR whether directly or via bureau. All logs will be uploaded automatically to LoTW and POTA. 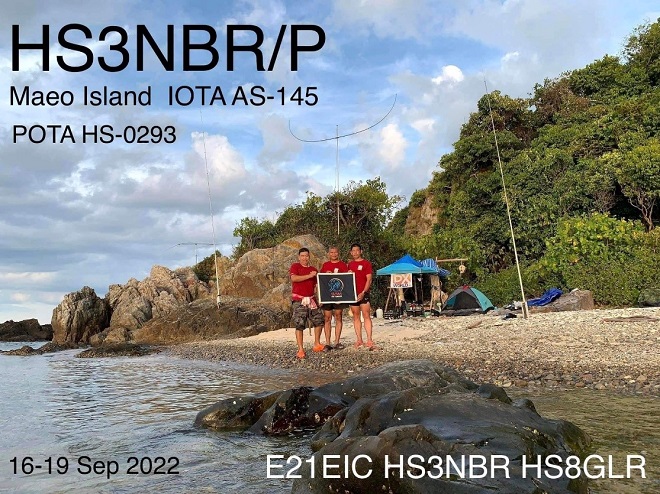