The first RAST meeting in five months was held at an outdoor restaurant in the northern suburbs of Bangkok on Sunday, August 2nd. The location was selected to enable social distancing, and to minimize the possibility of Covid-19 infections.

(left) Registration and pick up of QSL cards from the RAST QSL Bureau. (right) HS0ZDX and HS1FVL

Located beside a lake, Baan Imm Sabuy provided a comfortable and refreshing atmosphere

The environment at the restaurant, which is located beside a large lake, was refreshing, with a breeze and cloudy skies. It was cool, and without any rain.

An HF station was set up with a 7/14MHz three-element beam erected in the adjacent parking lot. Two of the members present were also demonstrating how they could remotely operate a station at their home QTH using a notebook computer with software installed, for two-way amateur radio remote control over the Internet.

Just before the beginning of the meeting, a 7/14MHz dual band Yagi antenna was erected in the restaurant parking lot.

Equipment and accessories, such as filters, headphones, and lightning arrestors were also offered for sale during the meeting. A nano vector network analyzer (VNA) was also on sale, and it was explained how this equipment can be used for measuring the SWR of an antenna system. 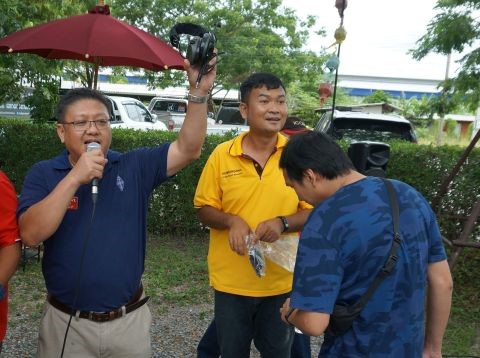 RAST President Jack, HS1FVL holds up headphones which were on sale during the meeting

A buffet lunch was served, and the owner of the restaurant, also an amateur radio operator, Siramath, HS5XWY was introduced to the members by RAST President Jakkree (Jack), HS1FVL.

After newcomers to the meeting had introduced themselves, Jakkree announced that the next VEC exam for a US FCC amateur radio license would take place on August 15th from noon onwards at the King Mongkut's Institute of Technology Ladkrabang (KMITL). In addition, it was announced that the annual “RAST on the beach” event would be taking place in October this year in Rayong Province.

The RAST President said that the RAST HS0AC Club Station at the Asian Institute of Technology (AIT) had been disbanded. He explained that the equipment, including a tower, had been removed from the AIT campus and transferred to a new site at the MMC Factory about one kilometer further north on Phaholyothin Road. The satellite ground station had also been moved from AIT to this location. 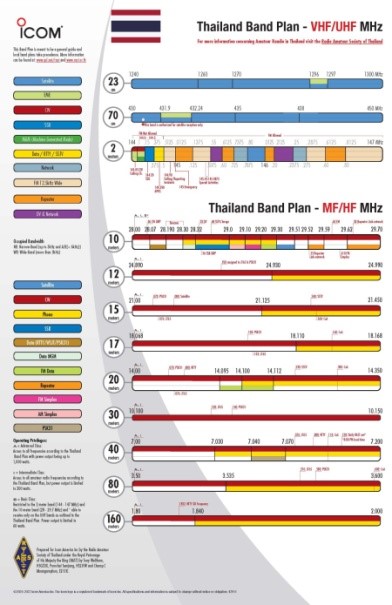 Another interesting project was by Ray Novak, N9JA, Icom America’s Senior Sales Manager and Maureen Blomgren, a graphic designer. In collaboration with RAST by Tony HS0ZDX, Joe HS2JFW and Champ E21EIC, they created a table of the band plans of Thailand, complete and made beautiful with support from ICOM America.

With this session held during the COVID19 pandemic, the Thai VE Team provided alcohol for hand cleaning along with a body temperature check

On August 15, 2020, the US FCC Amateur Radio Examination 2/2020 was held at the King Mongkut's Institute of Technology Ladkrabang (KMITL), Bangkok by the Thai VE Team from RAST, with a total of 31 candidates.