On 18th October 2020, The Radio Amateur Society of Thailand (RAST) under the Royal Patronage of His Majesty the King, held “The 3rd HF-101 Seminar” via a zoom meeting for the new HAM members. 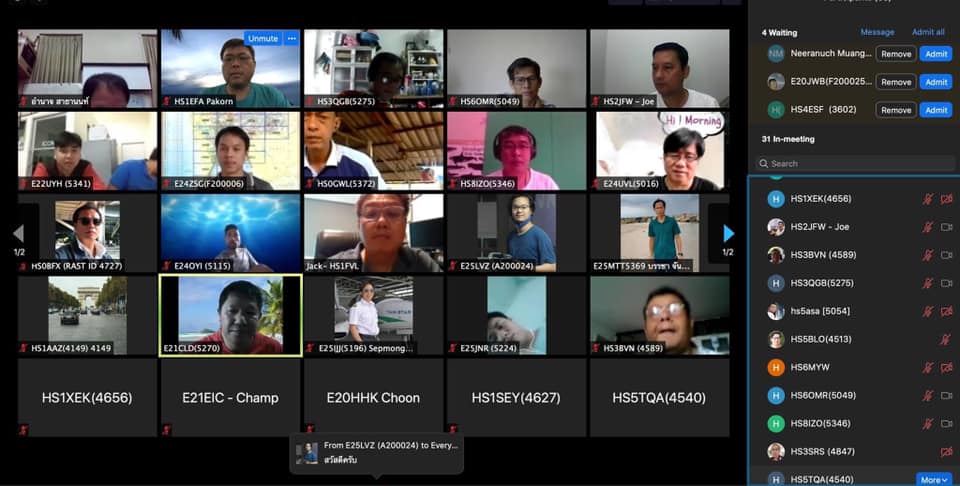 The topics of the seminar include: 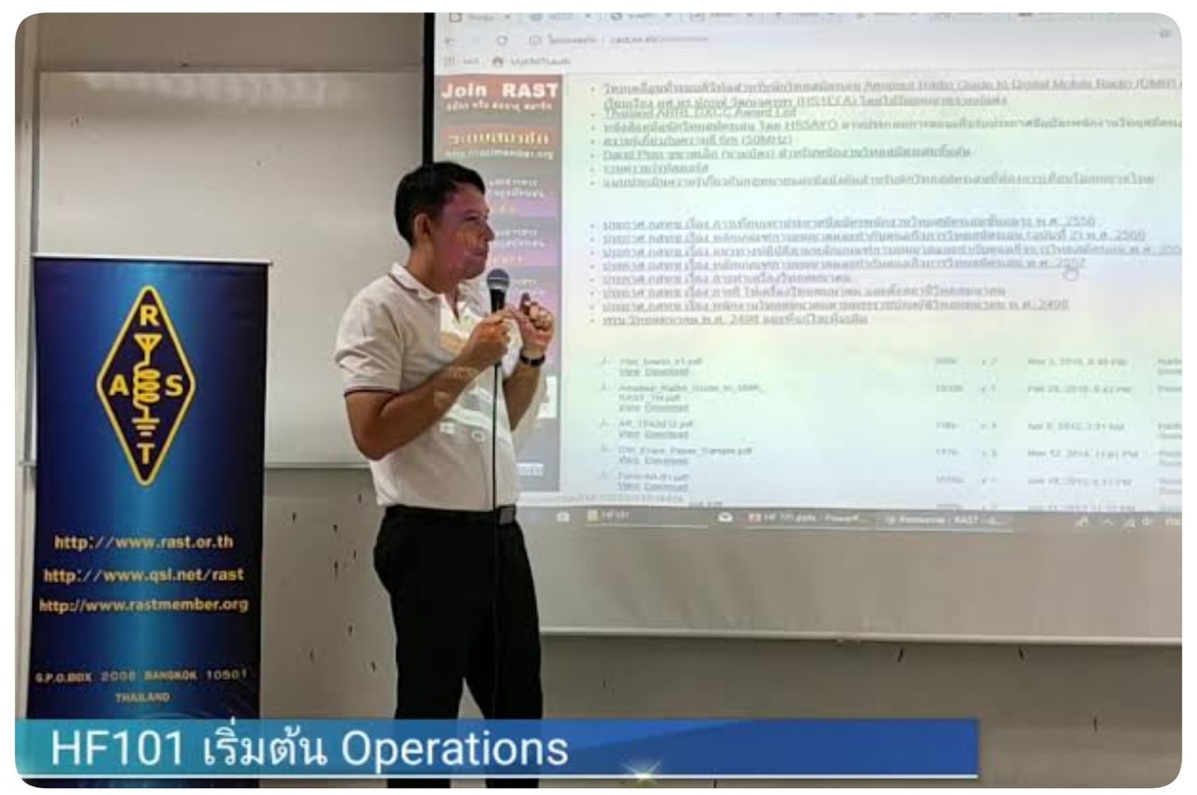 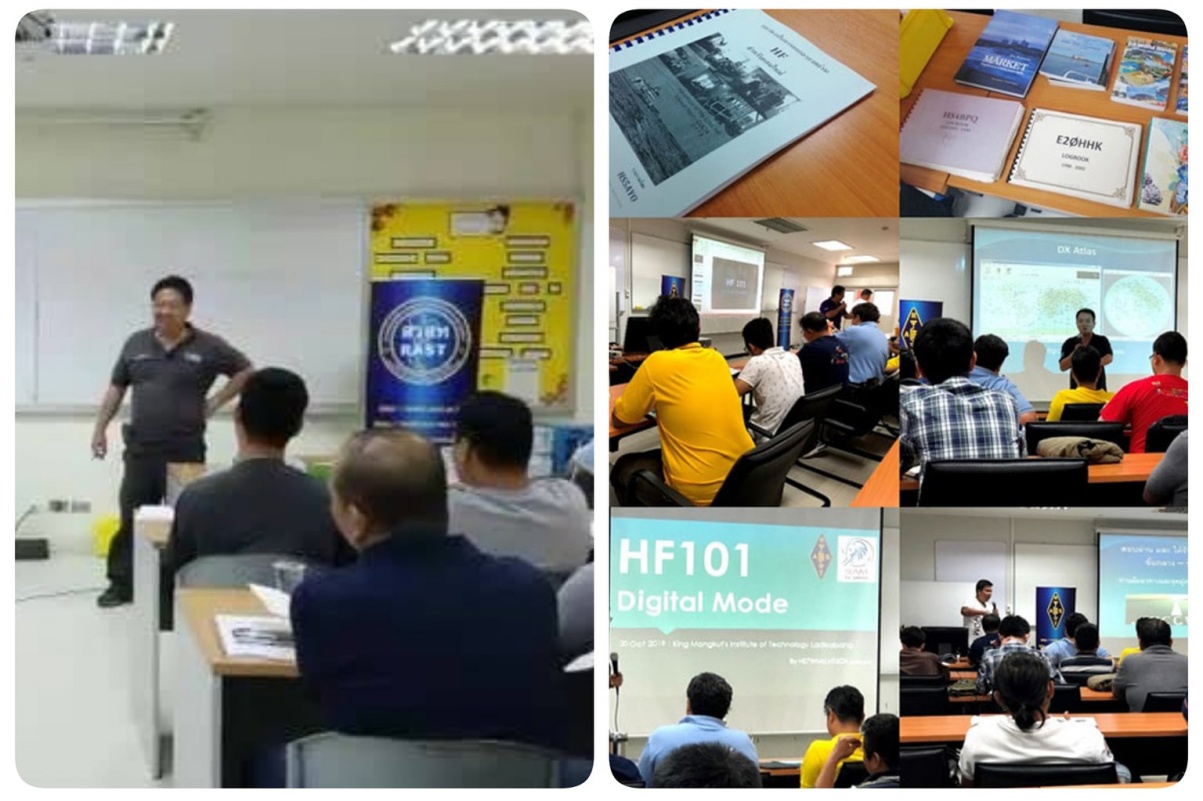 RAST president Dr Jakkree Hantongkom (Jack), HS1FVL started the seminar with an opening speech at 09:00. Over 40 participants and lots of interesting questions were raised during the two Q&A sessions, in particularly about the types of antennas to be used and the availability of HF propagation prediction tools on the internet. For many, this seminar serves as a steppingstone for those who have just upgraded from the Fundamental Certification to explore new experience further for VHF and local contacts. The new acquisition of knowledge may help them to operate new HAMs more profoundly. So they can use HF bands to send out messages not just locally but across the World. 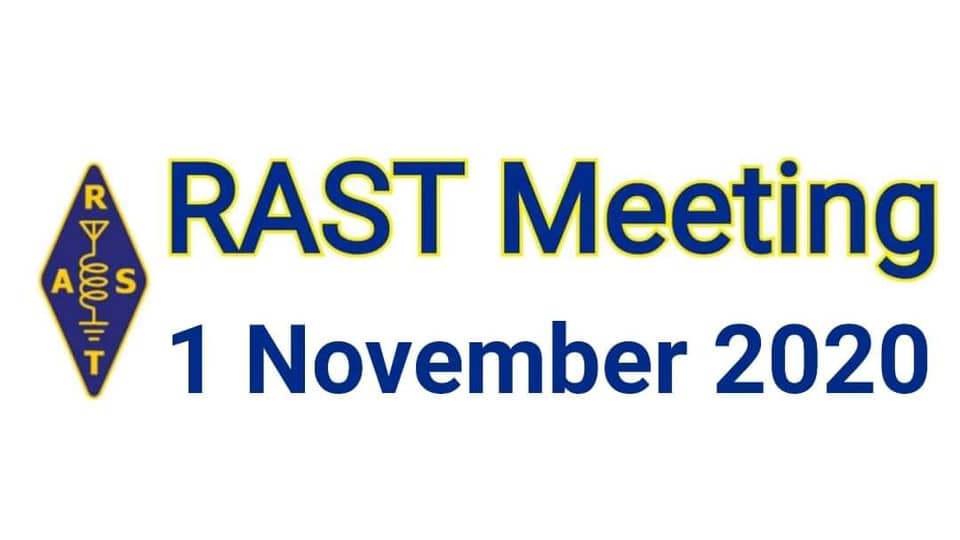 RAST conducted a monthly meeting on 1st November 2020 at Baan ImSaBuy at a restaurant in Bang Bua Thong District of Nonthaburi, the northwestern suburbs of Bangkok. The meeting was taken place in an outdoor environment to avoid any risk of contracting COVID-19. 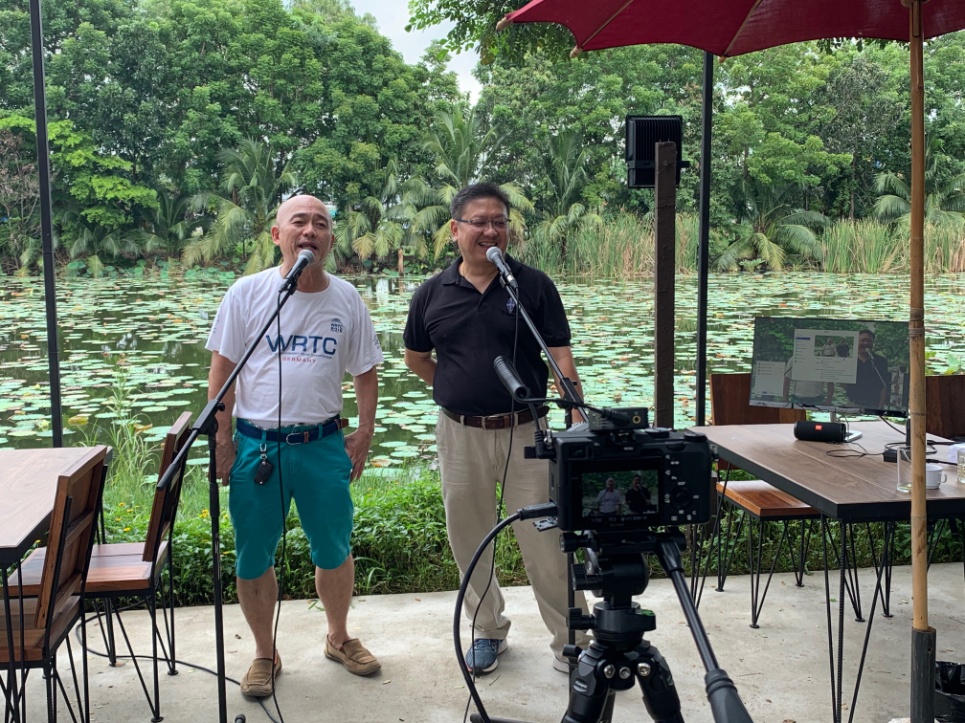 The turnouts were relatively low, there were around 25 members attended the event in the end. The President of RAST, Dr. Jakkree Hantongkom (Jack), HS1FVL announced that it is important for RAST to maintain co-ordination with the King Mongkut Institute of Technology North Bangkok on the space program. He also appointed Mr Apiwat Jirawattanaphol (Pao), HS4SCI, a former space engineering student, as the main coordinator and representative for RAST.

The Broadcasting and Telecommunications Research and Development Fund for Public Interest (BTFP) is responsible for the “Summary of Budget Allocation for 2020”, who also authorized to permit 85 Projects, as well as an inspector for “Automatic Weather Station Prototype” that developed by The Radio Amateur Society of Thailand (RAST) under the Royal Patronage of His Majesty the King. 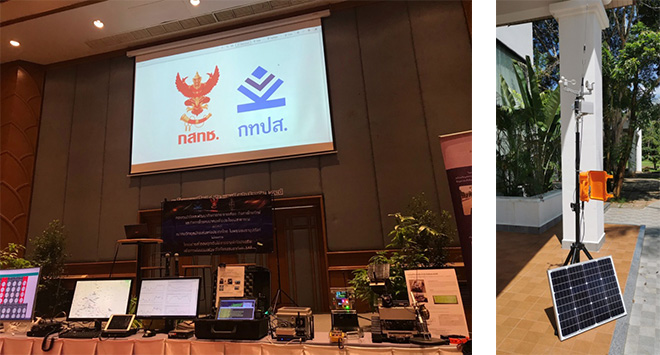 On 5th November 2020, at Maritime Park & Spa Resort, Khao Kanab Nam, Krabi, Tara Conference Hall, The Broadcasting and Telecommunication Research and Development Fund for Public Interest (BTFP) and relevant authorities jointly announced the budget allocation for 2020 was decided to support 85 projects that are for public interests. BTFP also performed an on-site inspection and test out the “Automatic Weather Station Prototype” that developed by The Radio Amateur Society of Thailand (RAST) under the Royal Patronage of His Majesty the King, as one of the projects which received the funding under Type 1/2018, the project was titled “Backup Wireless for Emergency Communication with Co-ordinates and Intelligent Network for the Monitoring and Prevention of Natural Disasters and SAR”. Relies on the use of radio frequencies and hi-speed Internet to create a real-time weather monitoring system that has the capability to support governmental agencies thatmanage and prevent natural disasters, to locate search and rescue team, and to help farmers plan their cultivation. Also, the weather patterns are becoming increasingly unpredictable in Thailand, these technologies play a vital role in preventing any damages that may occur in the future. This Automatic Weather Station has indeed passed the performance test and have reached the standards set forth by RAST. These 40 stations have already been installed across Thailand.

Mr. Nipon Jongvichit, Director of BTFP revealed, under the direction and regulations of Thailand by the National Broadcasting and Telecommunications Commission (NBTC), in order to drive innovation and research in the broadcasting and telecommunication sector to benefit public, economy, and society, BTFP aims to promote and support the use of radio frequency spectrum to its full potential through budget allocation to various departments.

1. I-Gate WX station to pull together the statistics and any attached data from each province
2. Sensors that are appropriate for each area, which then forward the data to the receiving station
3. Antenna equipped on the VHF band at 144.390 MHz
4. Cables, power source, and all the connectors involved

The sensors are responsible for taking the measurements at 10-minutes intervals.
The data are sent from the sensors to the I-Gate WX receiving station, which in turn forwards the information to the central hub for collection.
The data can then be processed and analysed, also displayed as required.

In general, the information gathered from these stations can be applied in 3 main contexts:

1. Aid the government in the management and prevention of natural disasters - The system will continuously report natural statistics in real-time via sensors across all regions of Thailand. Such data includes temperature, humidity, air pressure, rainfall, wind direction, and PM2.5 pollution level. All these data function to serve the general public, civil and government agencies, in monitoring, surveillance and prevention of natural disasters especially in remote areas, through the use of VHF which is not limited by geographical features, and whose data can be viewed graphically for easy understanding and implementation. The general public can gain access to these data and adapt their lives accordingly at no additional expenses.

2. Pinpoint search and rescue in real-time – The system will processed the geographical data and pinpoint the search in real-time in the form of blinking red light in the program, whereby it is able to differentiate between different objects such as human, cars, planes, boats and other vehicles, as well as track the movement in all areas, the information of which can be reach via the internet from anywhere in the world. Users can set the scope, and use the information gained to plan the rescue mission in real-time and adapt to the situation as necessary without having to be on-site. This is especially useful if the emergencies are being handled by generals or commanders who must issue orders from far away but need a good overall understanding of the situation for careful planning and coordination.

3. Help the farmers to plan their cultivation and harvest – The system will display important information related to cultivation such as rainfall, soil moisture content, water level in the river or canal, wind speed, and weather conditions. These data can be kept as history records for future extrapolation if required. The information gained can also aid Smart Farming and help the farmers to plan the timing of future harvest. In addition, it can also serve to track the efficacy of the Royal Rain project for future flights management. 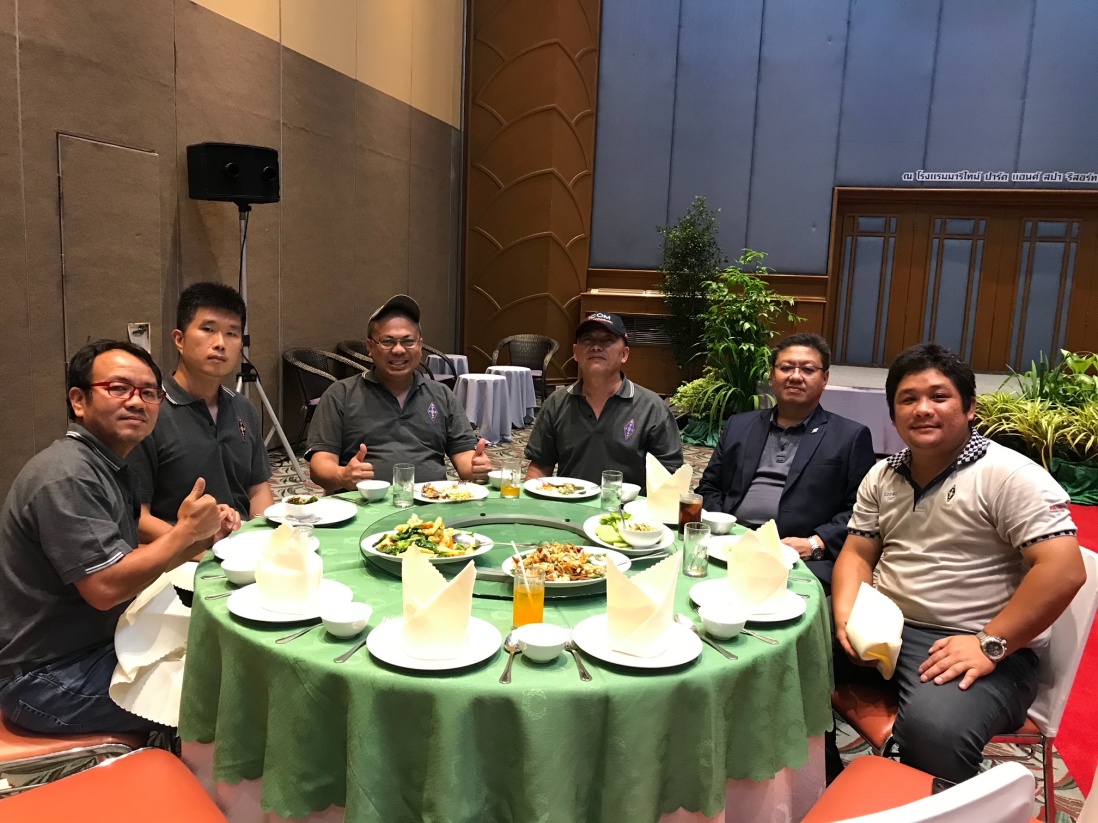